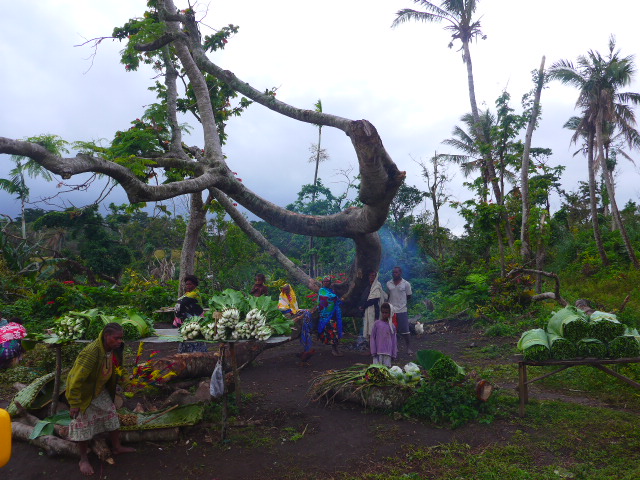 We’re on our way from the tiny township of Tanna Island passing small villages and markets along the way. Mostly shy people but very friendly and happy to sell you their truly fresh ‘organic’ vegetables. You have to see the dark-chocolate brown earth to realis just how tasty and delicious the food in Vanuatu really is. 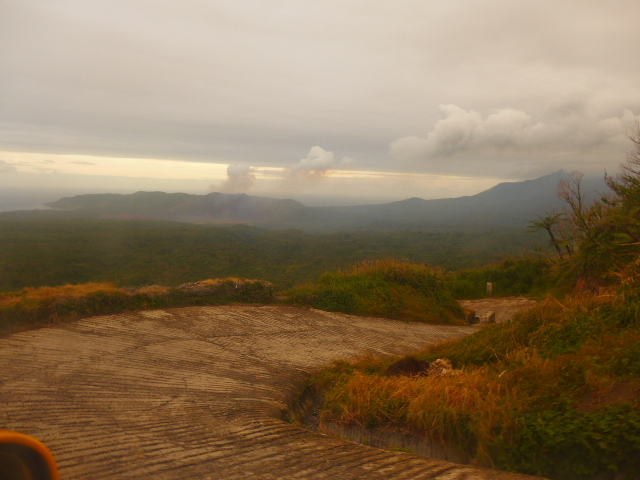 Believe it or not, this is one of the best parts of the roadway leading us to this smoking fella … 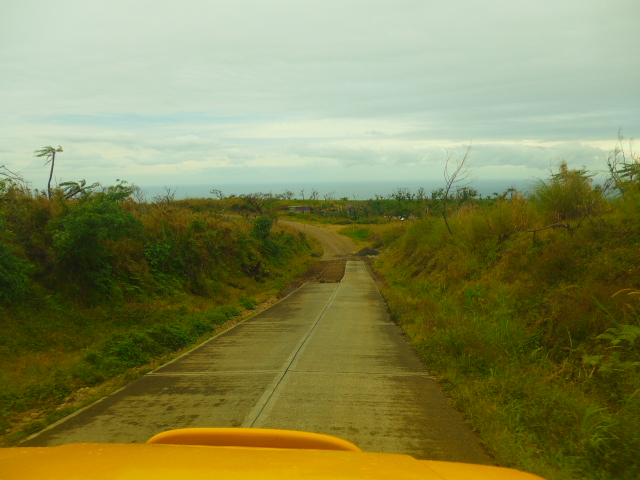 Not looking forward to the partially-built road ending. 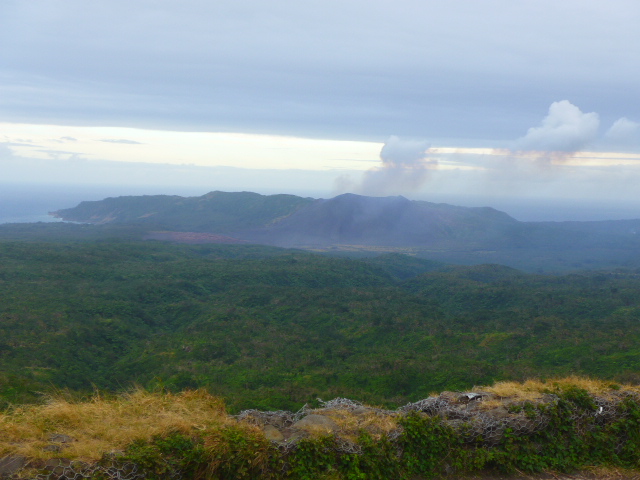 Yasur, the best-known and most frequently visited of Vanuatu’s volcanoes, has been in more or less continuous Stromboli an and vulcanian activity since Captain Cook observed ash eruptions in 1774. 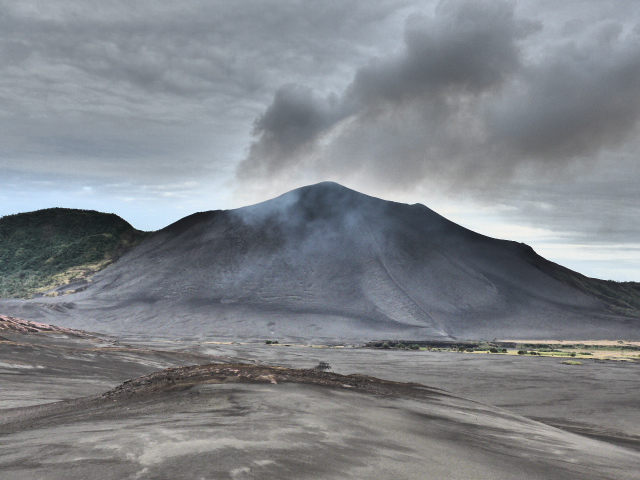 Upon closer inspection, you could be forgiven for thinking you’ve just arrived on the moon. 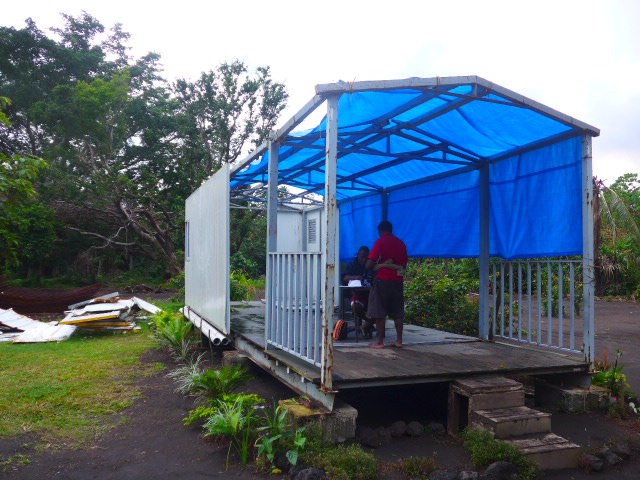 Our guide buying our tickets at the entrance to the park. Individual adult price approximately 3,200 Vatu (A$41.00). 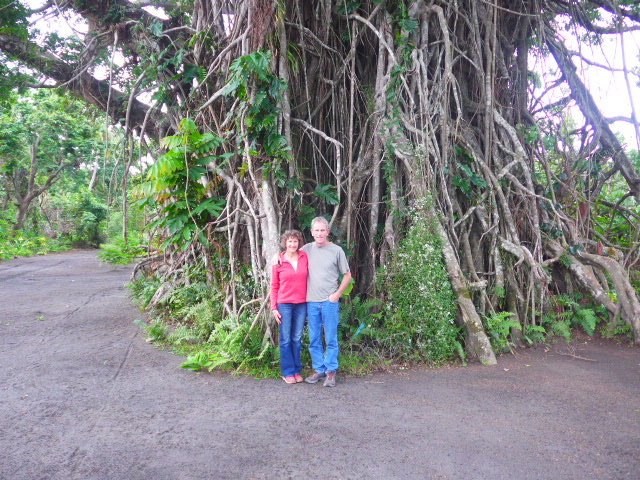 Kerrie and Mike, like me waiting for our tickets to gain entry. Admiring a large Banyan tree, which incidentally is small compared to the one we’ll see tomorrow. 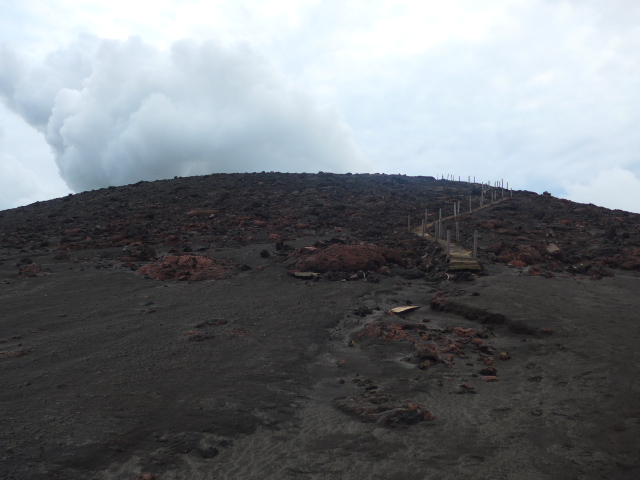 The area around the eastern base of the cone of Yasur volcano is covered with thousands of large bombs from previous strong eruptions. It’s a height of 361 metres (1,184 feet) above sea level. 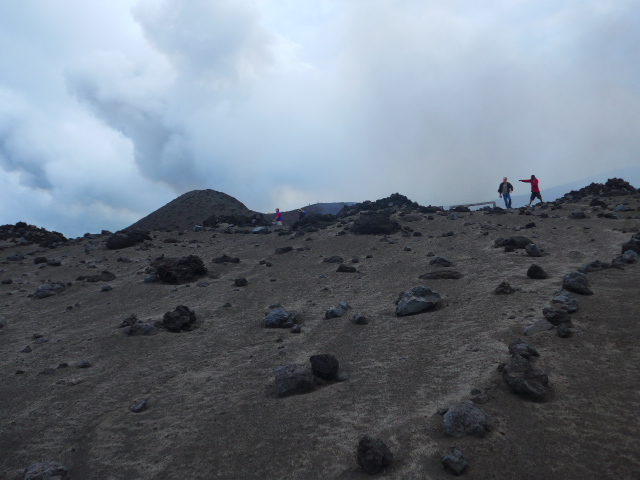 After a rather arduous 4 x wheel-drive adventure through unsealed roads, island villages, deep pot holes, flowing rivers and desolate ash plains, finally we arrive at the base of Mount Yasur. Upon hearing all the rumbling, you’ll be amazed to see what’s inside this big bubbling hole in the earth’s surface … The drive took about one hour and twenty minutes in fine weather conditions. 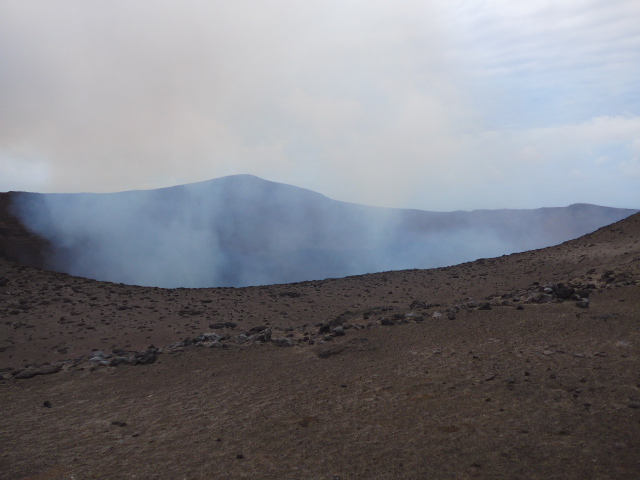 As Vanuatu lies squarely on top of the Pacific Ring of Fire, it has nine active volcanoes, seven on land and two beneath the sea.

This is the most famous volcano in the world for its constant activity and is the most easily accessible – bringing thousands of tourists to Tanna Island each year. 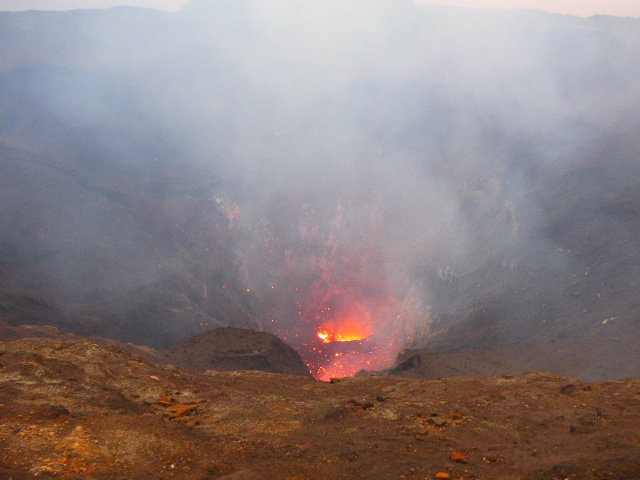 While the walk is a little rough and steep in parts, the climb only takes about 15 minutes. Then when you’re there, right at the mouth of the crater, it’s the most amazing experience to feel the rumbling earth beneath your feet. 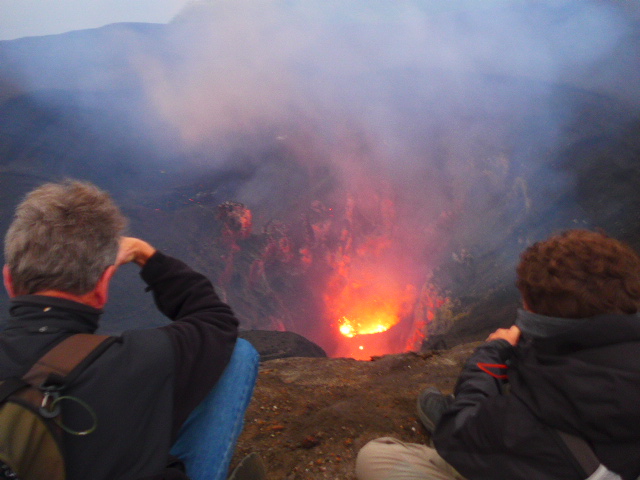 I didn’t take this photo, our guide Mr Song took it for me as I was feeling quite heady, especially from the wind blowing ash and smoke our way. I couldn’t sit for fear of being unbalanced when standing again. 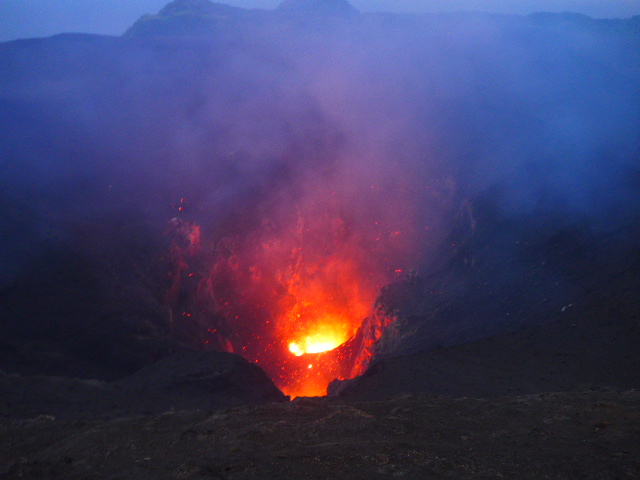 If I can describe it as being petrified and exhilarated at the same time, then that was me.

2010 has seen an unusual level of high activity from Mt Yasur and is being monitored constantly each day by authorities. 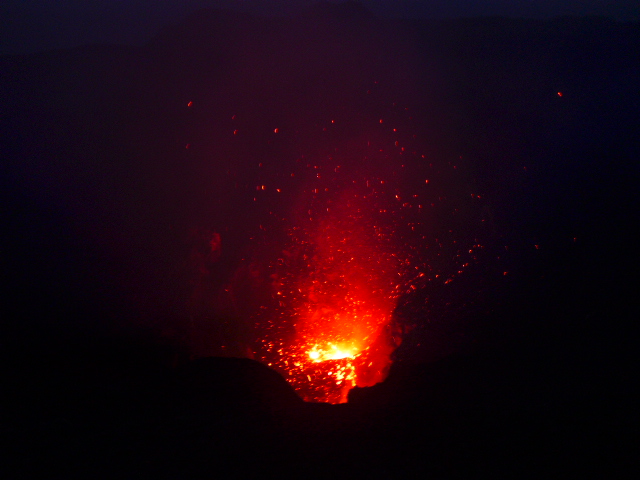 Always go with a guide and follow their directions at all times, they are trained and experienced to know the safest places for you to stand and watch the activity. They will have torches and clothing suitable for the conditions. It can be very cold on occasion – so rug up, keep with your guide and do as they say – which means staying in the boundaries which are meant to be safe.

Three people have been killed over the years because they wandered to lower, unsafe areas. In one incident, both a guide and tourist were killed because the tourist had insisted on going to a dangerous part and the guide accompanied her. Both were hit by erupting pieces of lava and died instantly. 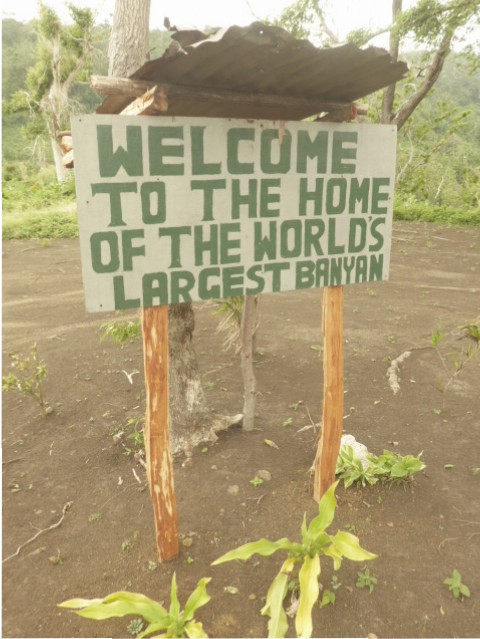 Next day we’re seeking out ‘The world’s Largest Banyan Tree’ and yes it’s here on Tanna Island as well. 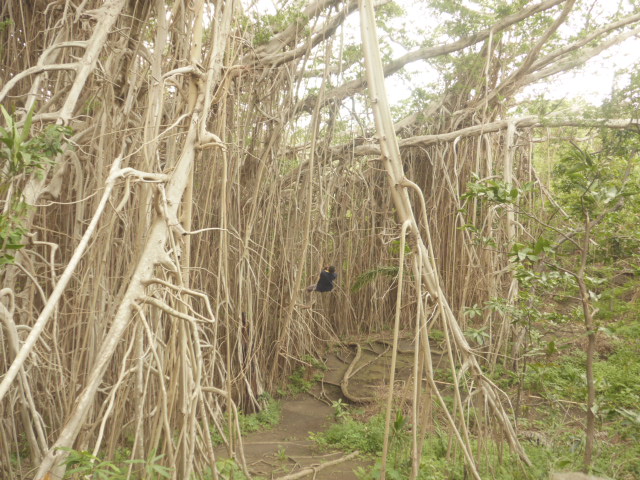 Our guide who lives locally having a swinging good time. 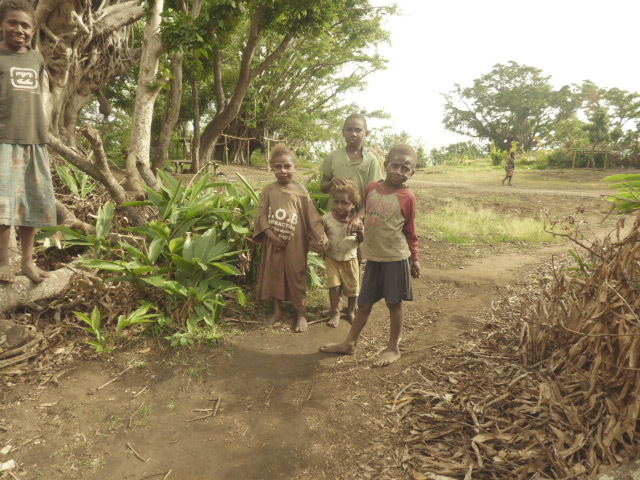 And here’s the real Tanna, lots of children from the villages who’ve come out to say hello. 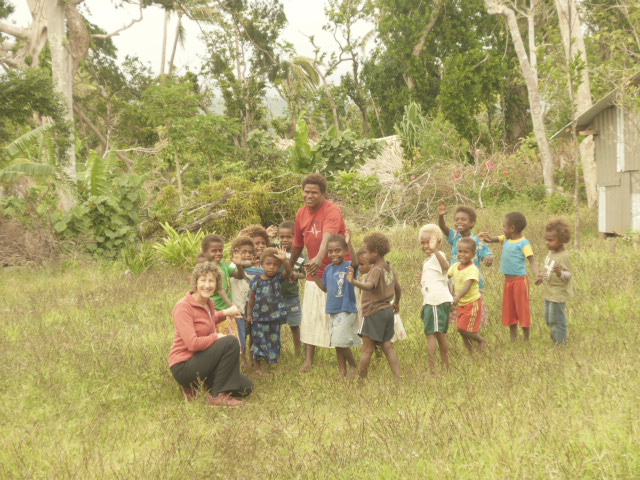 Kerrie making friends with the school children who are all at different stages of learning. When visiting these more remote islands, don’t forget to clear out your stationery and text books which might be useful for the schools and take it along for them. They’ll be greatly appreciated. 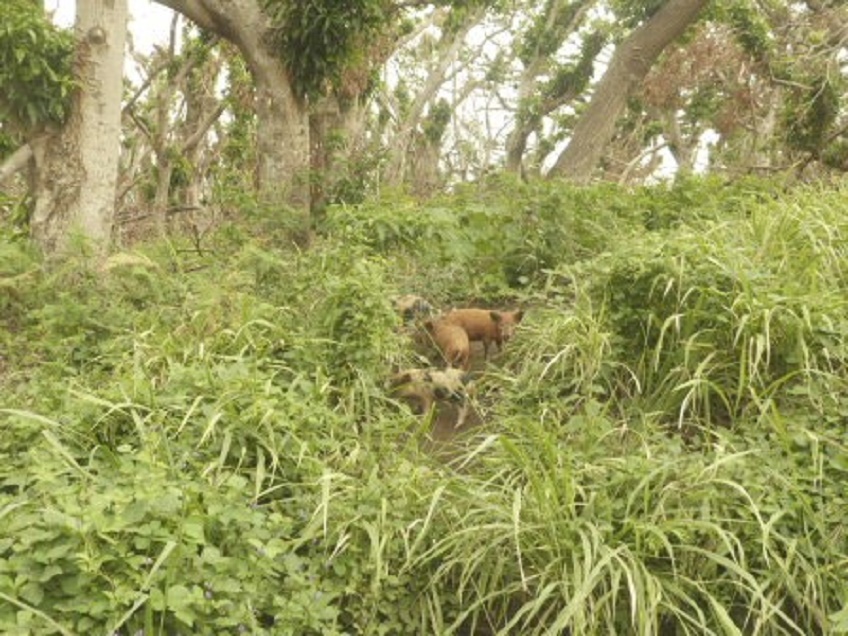 These three little piggies are making their way home and so are we!