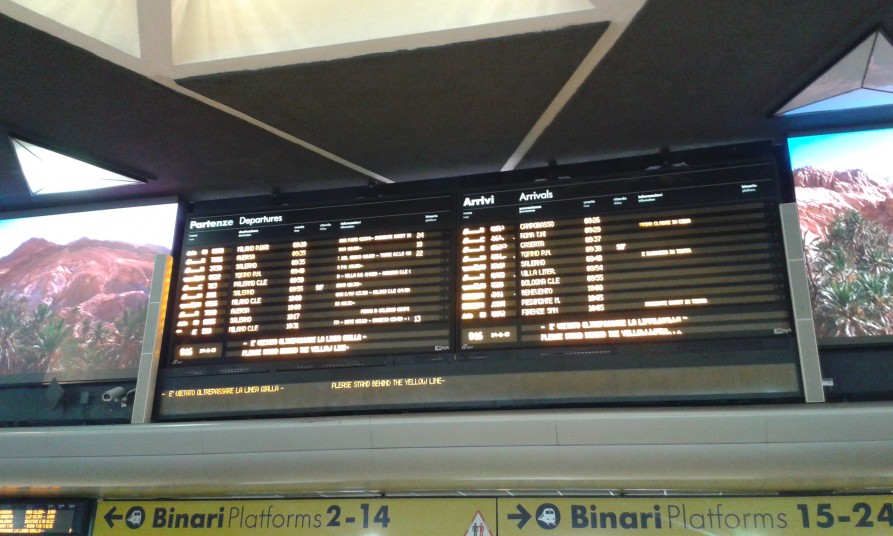 Unfortunately, there wasn’t a lot to report from Bari to Naples by train as the weather was inclement with very little photo opportunities and the outlook diminished somewhat. I know I could’ve flown to Sicily, but for me it’s about seeing the lay of the land and enjoying the rocking, rolling sojourn of a rail escapade.

However, this next post I’d penned mostly as a recount of my train journey last year from Naples onto Sicily.

For those who know me well, you will again read excepts from the Facebook Page ‘You Know You’re from Cowra  When…’ And, because Cowra was where my parents as ‘Displaced Persons’ had settled after arriving in Australia, I felt it was fitting to write about some of those insights. Firstly, they were at the Bonegilla Camp (like many others), and  they too had left war-ravaged Europe and mine embarked on their new life from the seaport of Napoli and the records show the Ship Nelly had arrived late November, 1949 into the Port of Melbourne, Victoria Australia.

Whilst I was standing here at Napoli Termini looking at the schedules, I’m pondering what life may have been like as post war-torn Europe tried to repatriate its peoples – most of whom would never return to their origin after leaving its shores hoping for a better life, leaving their families behind and facing an uncertain future. 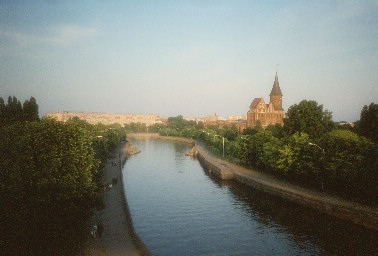 Königsberg (until 1946 officially: Königsberg in Preußen) Now Russia’s Kaliningrad it was the first opportunity we had access as part of a tour. Photo taken in 1997, and on this visit with my cousin Beine and Uncle Reinhard, we found the family farm of which the nearby township no longer exists of its old name – just like many other European places. Additionally, many country’s borders had changed after the war and of course, the division of Germany being the most evident.

This is my story, partly of my family’s early life in Australia, perhaps I’ll write more about it at a later stage … These are the excepts from my journey in November, 2015 of my thoughts and maybe one answer to Jean’s post. See below.

“On Facebook I’d read with interest Jean Eade’s post of ‘Town Revival’ with Cowra having been given as an example to the dwindling numbers of country towns.

What they seemed to have forgotten is the post-WWII immigration of the 1950s onwards – when towns such as Cowra swelled due to the then current Government’s slogan of ‘Populate or Perish’. There was an influx of new migrants who helped form the backbone and soul of this community’s psyche. In terms of multiculturalism, I believe Cowra was somewhat ahead of its time, considering the diversity, skills and cuisine offered to a small rural epicentre; of which they had to call their new homeland – for better or for worse.

After I boarded the train in Napoli (Naples, Italy) heading onto Sicily with a nine-hour trip ahead of me, it brought back a few memories of what it was like growing up with European parents who’d left their very own world from this Italian port.

On this sector of my trip, I was holding a Prima Class ticket and I knew that the train would eventually divide at some point, I’d then have to move to another carriage to ensure I ended up in the right destination. Once the conductor came along, he tried to explain reluctantly, but as luck would have it, I was seated next to an Italian Professor who spoke ‘good’ English and informed me when I needed to shift myself to another carriage. 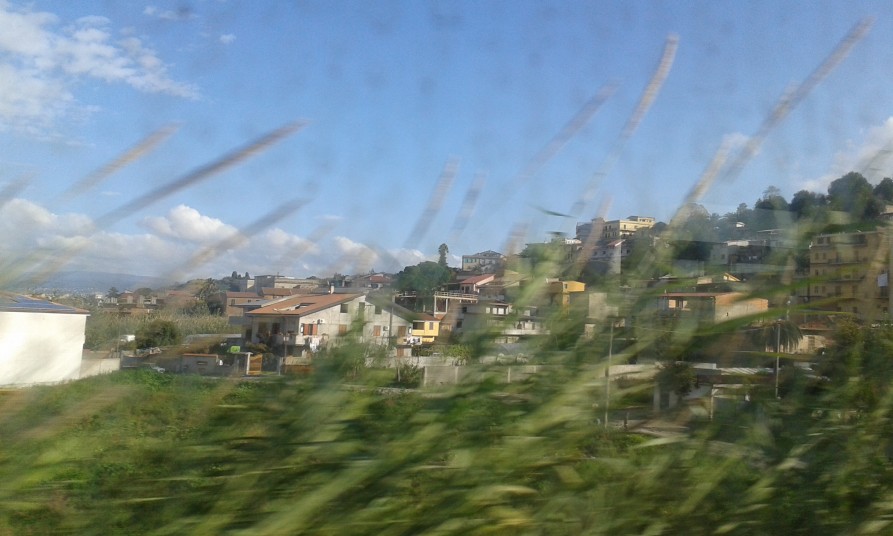 Afterwards, we chatted and the Professor asked me, how many days would it take to sail by ship to Australia? Clearly he could see I couldn’t answer immediately as I had reflected when Mum talked about the journey from Napoli, Italy to Australia; going back then through the Suez Canal when it was still opened and then onto Melbourne, Australia. Even as of today, I don’t believe there are any passenger ships which solely cruise direct from Europe to Australia. Maybe he had me bemused – because I was awokened to the fact this was exactly what my parents and two older brothers did in the latter part of 1949; one of which who had to be ‘fattened up’ due to having rickets before being permitted the stamp of approval to travel. They embarked on a voyage to the southern hemisphere which was as foreign to them, as were they to Australians. And, not just by language or borders, but a whole new ‘she be right mate’ way of life. 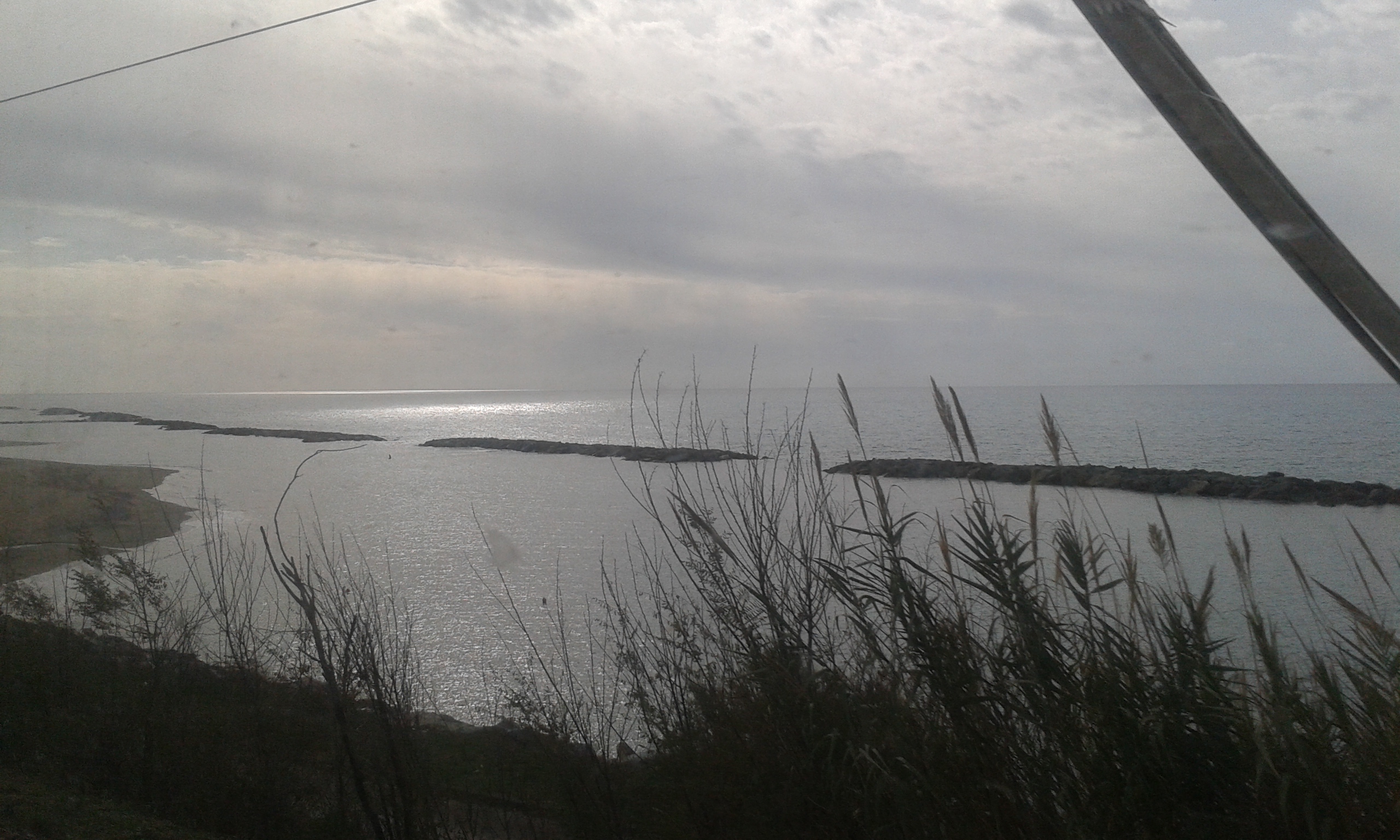 The question of being asked how many days sailing, can only be described in my mind as, what would’ve it been like if sailing to Australia on a luxury cruise liner as opposed to a ship load of immigrants? They were about to become New Australians (as the Government then coined their status), trying to embrace their new ‘one-door opening and another closing’ ideology – not necessarily having a marvellous time for the duration of the voyage.

As many migrants with ‘Displaced Persons’ stamped in their passports, they took Australia as their new homeland and were dispersed to regional areas with no input or say as to where they might like to live. I remember asking Mum as a young teenager ‘why Cowra?’ and she’d said it was because the Government placed them where they thought relevent at the time after being processed in Bonegilla. Dad had to catch/kill rabbits in Gunnedah (due to plague proportions) for a period of time to pay for their passage and Mum stayed with the two boys at the Cowra Camp trying to learn English – along with all the others. However, Dad gained a job on the Railway and they then lived close to the Loco in a tent alongside with three other families until they’d saved enough money to buy land and build in town. (You may have noticed by now, rail is my preferred mode of travel …)

Anyway, I have given this some consideration over the years and I believe Cowra was in fact ahead of its time in regards to multiculturalism and acceptance. I feel, many of the nationalities bestowed upon Cowra made it one of the most diverse small European communities in Australia without maybe realising it at the time. Move aside Melbourne … We already knew what it took – with a population which was miniscule by comparison to this cosmopolitan city, we were entwined with a varied assortment of nationalities and a kindred neighbourhood-like spirit. Everyone seemed to ‘get on’ with life and held similar Christian values and judgements. 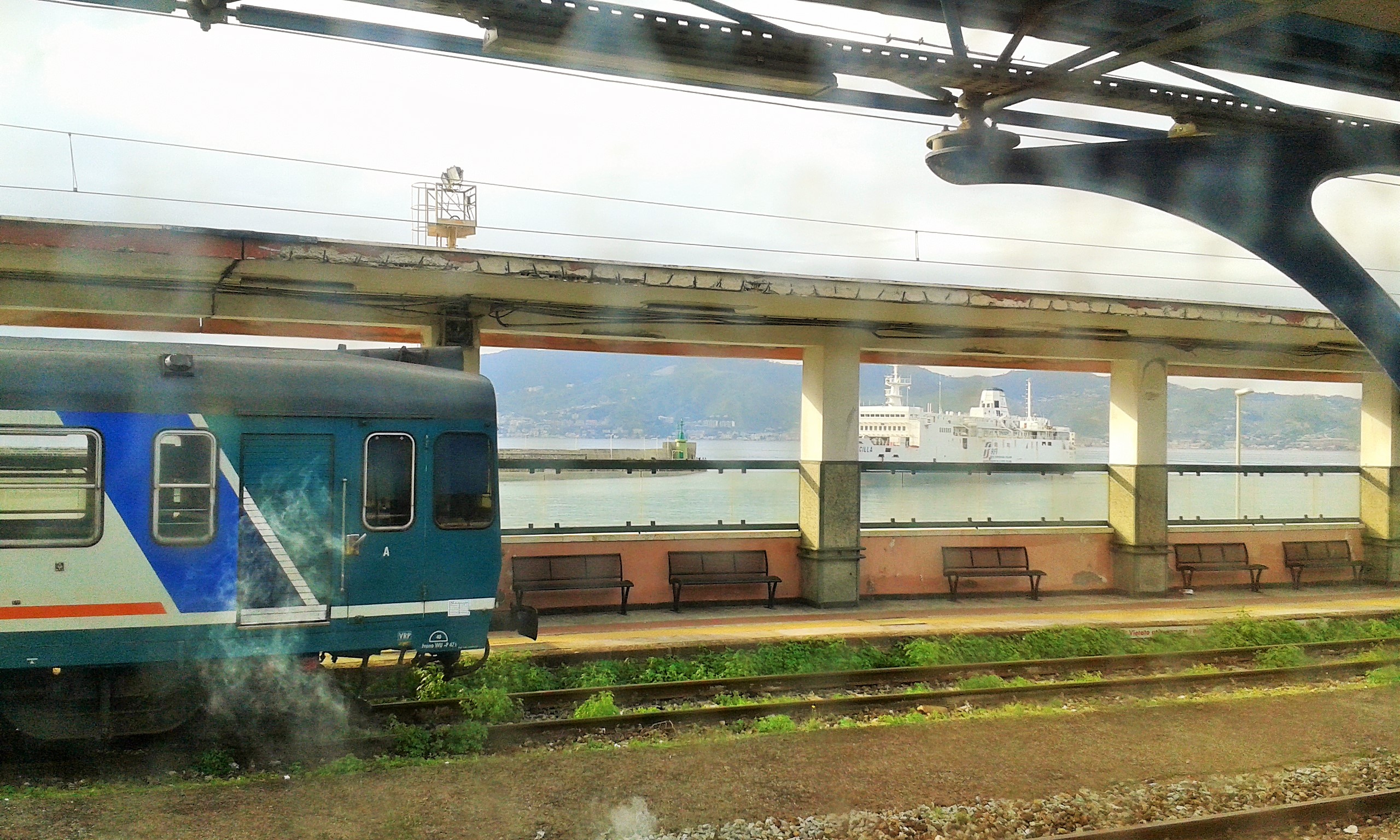 Anyway, having digressed from my travelling yarn, I eventually moved carriages earlier than I should’ve on my trip to Sicily ensuring I had plenty of time to do so. However, an older gentleman did the same as I and we ended up with our own cabins as most passengers left at Lemezia Termini, including the English-speaking Professor. This older man couldn’t speak English, nor I of Italian, but we struck a chord with a little bit of German. He’d never heard of Sydney, Australia. (It was a stark reminder that we as Australians are on a much smaller stage in this world than we think, even though we live in a big and lucky country of which others are at break-neck speeds to come and settle.) 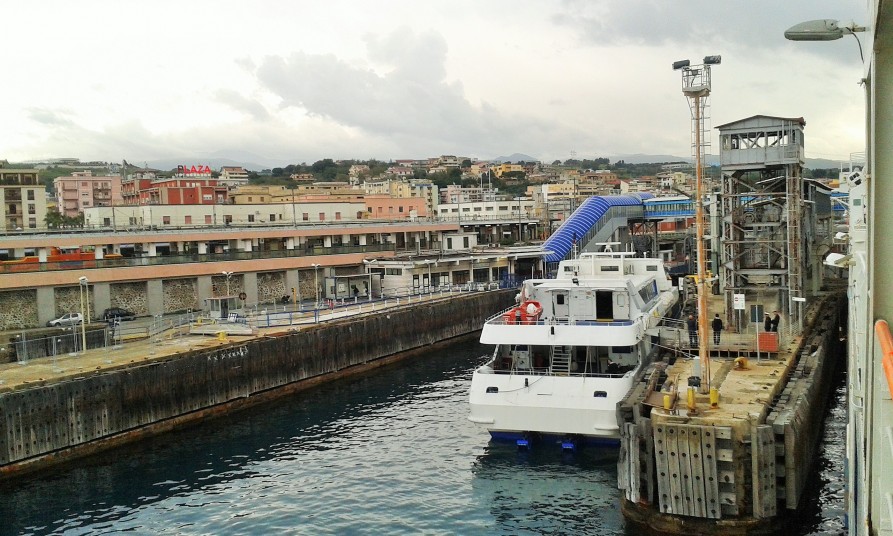 Our train was then prepared to be loaded onto the ferry for transportation for the 20-30 minute crossing from San Giovanni, which incidentally was a truly thought-provoking encounter. What if this was me sailing into unknown territory as a migrant? I don’t know the language for starters or customs, nor what lay ahead in terms of a home to live? How would I have been in a totally different environment trying to fit in if it had been me heading to say, this new land? Luckily I’m on holiday and just blogging along as I go.

Coleone family and mafia were still being spoken about by my new companion. My guardian, if I can call him that, looked out for me throughout the remaining five-hour journey to Palermo, even though I  understood he was alighting at Terminal 1 before me, his instructions were clear. However, once we arrived at San Giovanni, the train did indeed divide and importantly we were in our correct places at the time. He pulled out of his pocket a three-pronged key meant for carriages on different train services – not just in Europe (not unlike a wheel brace to look at) and he offered to lock my carriage door like his. I thought perhaps he was a retired train conductor with his precious spanner which would make us a little safer in a world full of materialistic people? Sometimes, you just think to yourself, maybe you’re in the lap of the Gods and you need to just trust in what’s before you. All what was in my suitcase – was it really all that important? Not at all. As long as I had my documents and something warm to wear, that’s all that really matters.

He and I meandered up to the top deck of the ferry after leaving the train’s compartment and then watched San Giovanni slowly disappear from our view. Certainly not something I’ve experienced before, but this elder had witnessed it many times and you could tell he was excited about going home to his family and something I admire greatly about the Italians – their sense of home and family. 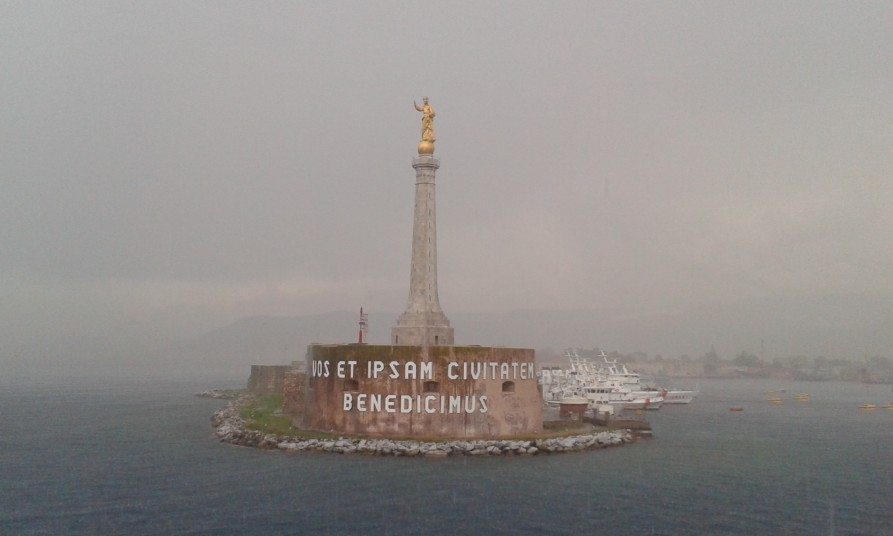 It pelted down with hail as we glided past the seven metre-tall golden Madonna guarding the entrance of the port in all her glory looking out across the Strait of Messina. Once on land again at Messina and the train offloaded onto the tracks, it was again divided and separated with the rear-end carriages departing for Syracuse and the remainder of us continuing north to Palermo hugging the coastline.

So what’s the purpose of me writing this? I think it’s wonderful Cowra had/has a respect of its immigrants’ contributions towards the Australian way of life – be it food, culture, art and yet, its differences. I’m glad to have been a part of it, rather than as a young teenager asking Mum ‘why Cowra?’ I’m grateful my family assimilated into a country town which did embrace us and we had the opportunity of growing up there. Unfortunately I don’t have an answer for the dwindling numbers, but it’s not always easy when it comes to offering new opportunities to everyone who seek them. Hence, the reason many of us leave for the metropolis of city life and move on.”