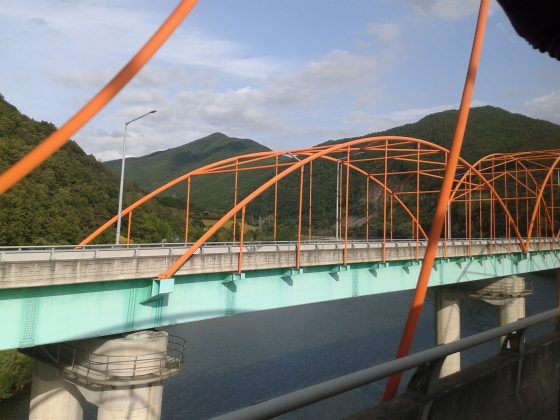 Heading off to High 1 Resort at Gohan and it’s about a four-hour’s drive from Seoul to relax and unwind in the countryside for a change. With the highest altitude of 1,345 metres, it’s amongst Korea’s best ski resorts and features clean, puffy snow which is a drawcard for professional skiers from around the world. 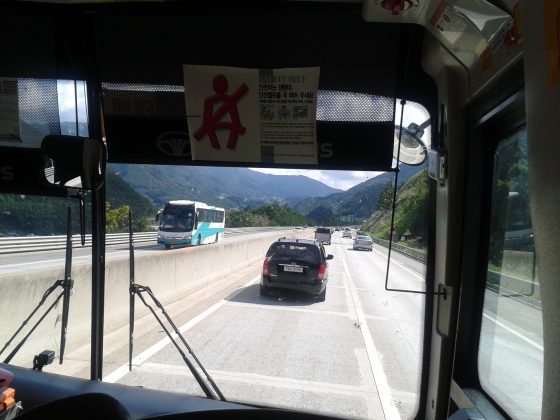 Catching a bus is easy enough in Korea and if you’re worried about how to purchase tickets, all bus stations sell on the day of travel and cannot be bought necessarily online. Schedules are frequent between cities and hospitality staff in hotels are eager to assist with information, prices and will advise you to arrive at the terminal with plenty of time to spare.

Transport was fast, efficient and reliable on the journeys I’d taken around the countryside and it included buses and trains as distances were doable on the same day. 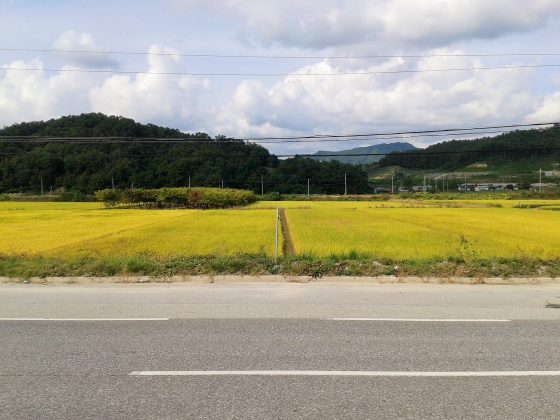 Lovely scenery all along the way and heading towards what is known as ski country on the eastern side of Korea, it’s definitely a mecca for all winter sporting experts. Though on this occasion I’m a little early for any snow falls. I don’t mind. Why? Because I can’t ski. 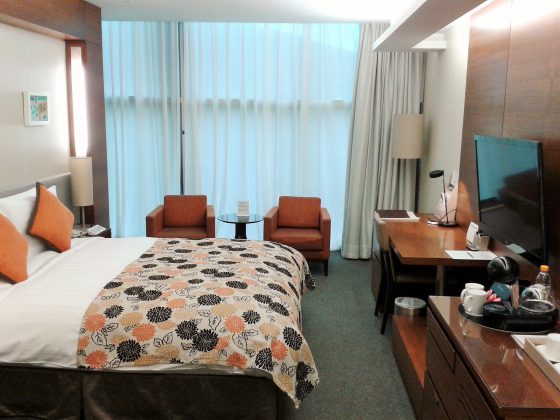 High 1 Resort is a five-star resort and is a destination in itself. Even if you’re not there for the ski season, it’s a retreat for those wishing to have a short break in the superb mountainous region of eastern Korea. Clear, fresh air and an easy bus ride from Seoul makes this area a favourite for holiday makers; both local and from abroad. 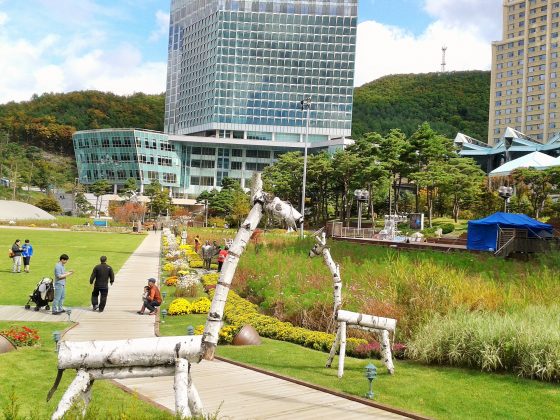 Wooden structures are a favourite here amongst children and it highlights the gardens with their portrayal of makeshift animals while recycling old timber branches. 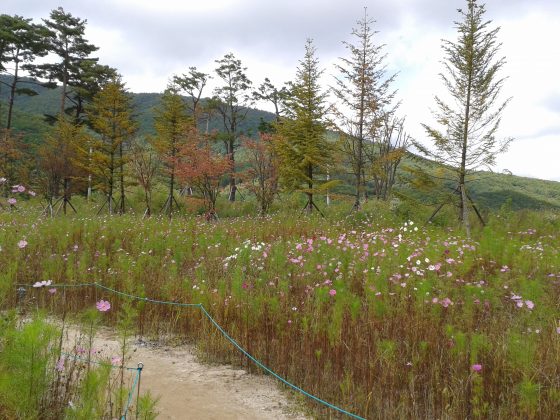 The resort also has a massive garden expanse within its grounds allowing guests the freedom to meander quietly and enjoy the surrounds. See, you don’t have to ski, just walk slowly and smell the dainty flowers instead. Much more sensible for someone like me who cannot stand on two skis if their life depended on it! 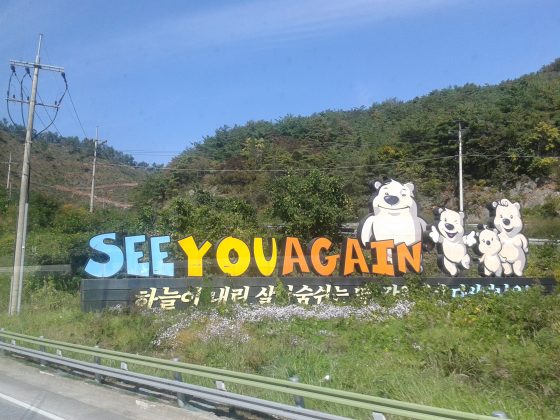 No doubt 2018 will be a big year in this region with the Winter Olympics approaching fast. Home to mountains, great skiing and winter sports it should be a huge welcome sign rather than ‘see you again’. 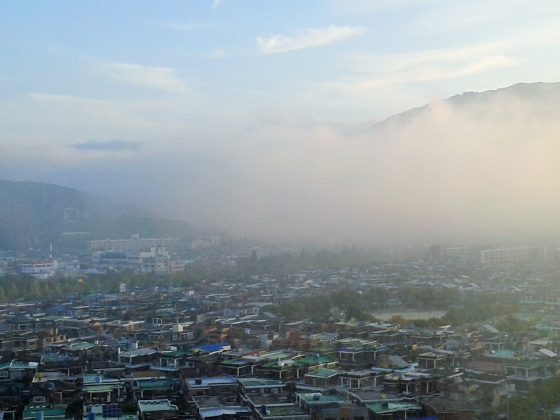 After a few hours on the bus, I’ve discovered Gangwon, but with a fog in tow. Asked why visit this city, I said “why not”? The Gangwon province will be home to the 2018 Olympic Winter Games in Pyeong Chang and I think it’ll be interesting to see its transformation from being one of the quieter regions of this busy and modern country, and then contrasting to the hustle and bustle of its popular counterparts. 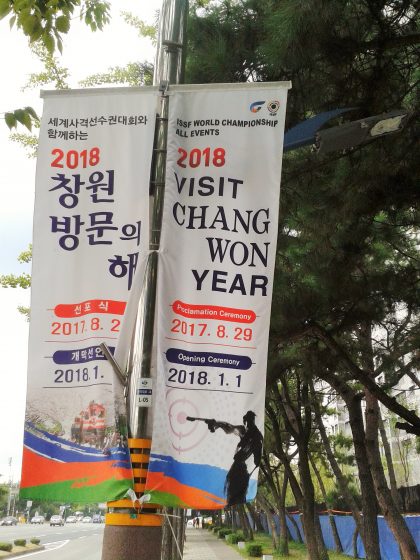 As a traveller and a travel agent, new emerging destinations have always been of interest to me and a curiosity in how they promote their points of difference. However, it’s now on its way, in particular next year in wanting a slice of the tourism dollar and realising many promotional activities are necessary for that to occur. Putting its best foot forward is paramount; particularly when competing with big-brother cities such as Seoul, Suwon and Bussan. 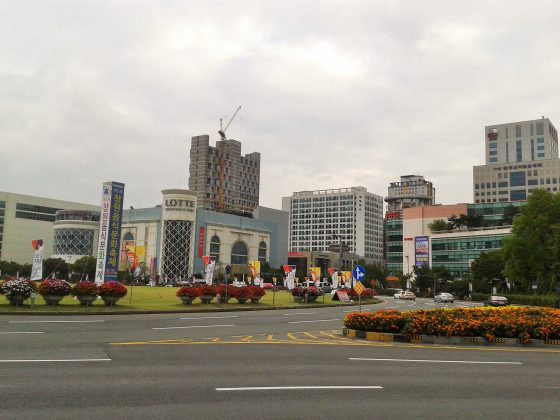 Traditionally known as a city which caters well towards high-tech companies from overseas, Gangwon has realised it’s high time to pull out the beauty kit and showcase itself as a tourist destination rather than its abundance of technological components. 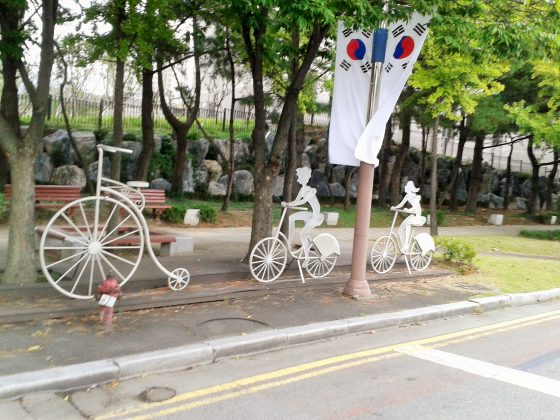 The city epitomises a bike-friendly place and in doing so, creates a means of transport which is faster and more efficient than most other cities around the world – and in that alone they would find enviable. Seven out of ten Koreans own a bicycle and with lycra-clad riders converging on the well-planned pathways each day, it can only be thought of as a sensible way to exercise, save on energy sources (except your own) and be a good-hearted greenie in the process.

In terms of speediness it would leave my own traffic-jammed home city of residence much to learn from. 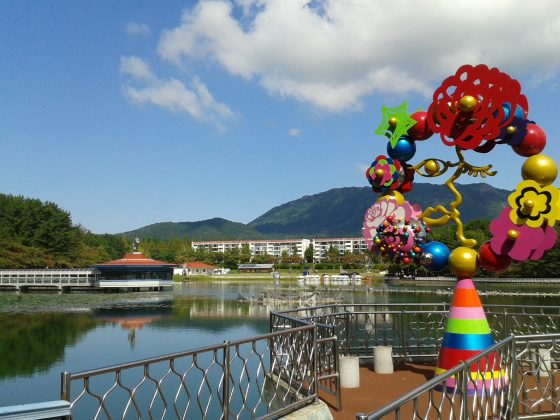 Yongji Lake in the heart of Gangwon is a place to take yourself or the family to cool off and take a breather.  The crown jewel and feature is the the water show which happens twice a night for 30 minutes; March 15th through November 30th (except rainy days and the third Monday of each month). 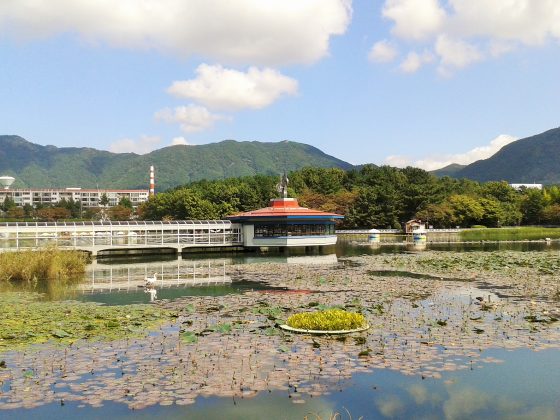 Although Yongji is a very small manmade lake, its soft track and spacious fields behind, gives 1.5 million people a place to play or just hang out. 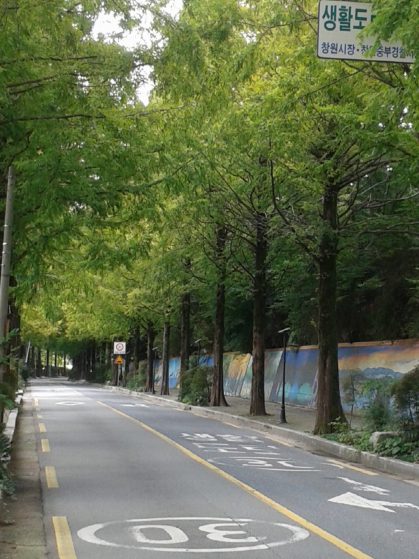 The lake is also quite close to the ‘Tree-lined Street’ and nearby there’s a myriad of restaurants, cafes and bars. 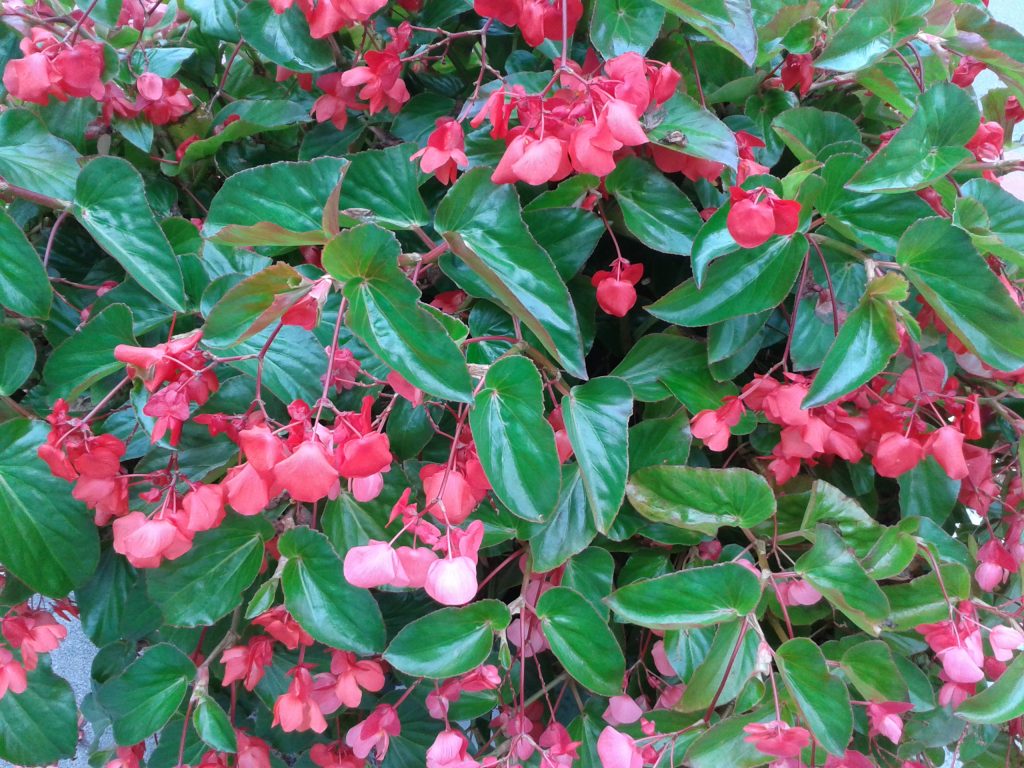 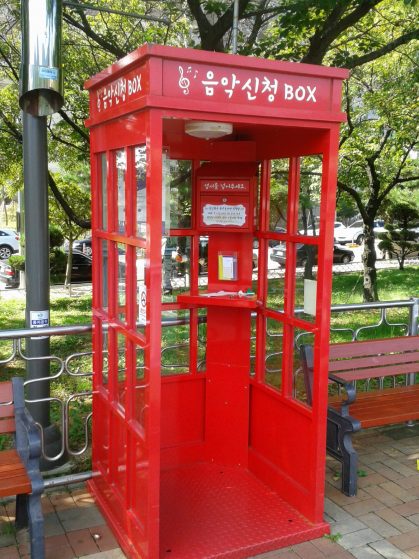 Didn’t expect to see a red phone booth in Korea! But, that’s what it used to look like – long before smart phones. How did we ever cope before … 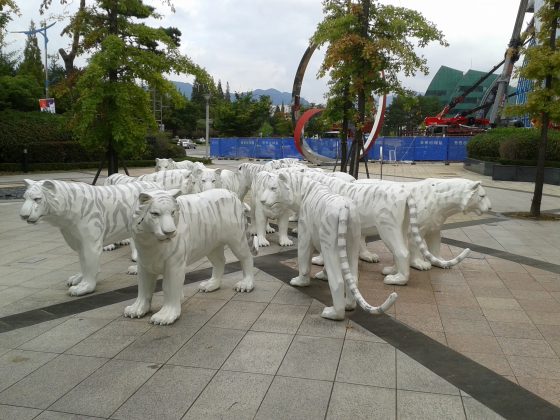 Outside of the Pullman Hotel and Convention Centre, youngsters love these big cats and as they act like a show pony for the little ones to climb all over … 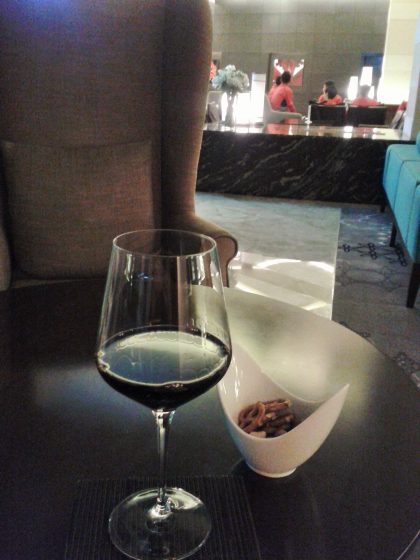 And, whilst you’re at the Pullman Ambassador Hotel, treat yourself to a couple of these – why might you ask? 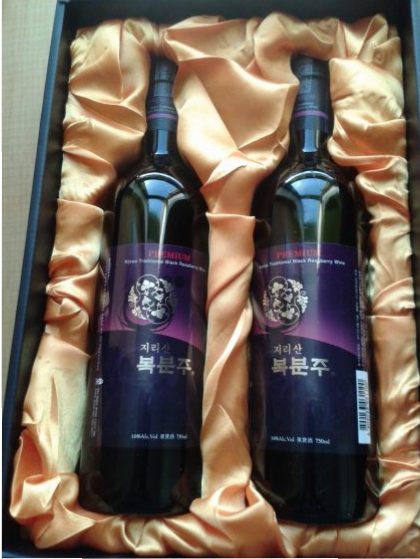 Because Korea makes a traditional black raspberry wine and it is divine! As you can expect it’s a little sweeter than most long-established vinos, but you really have to try it to appreciate just how unique it really is, and not to mention how tempting it can be to have another glass … 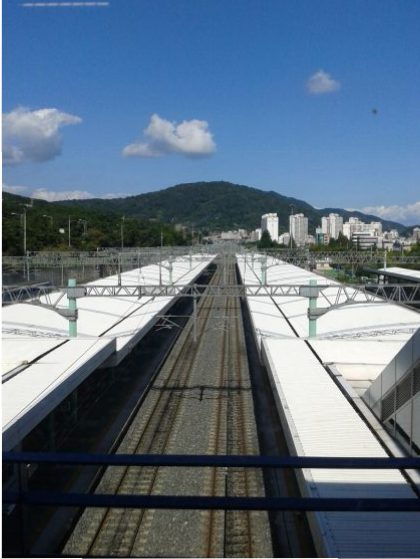