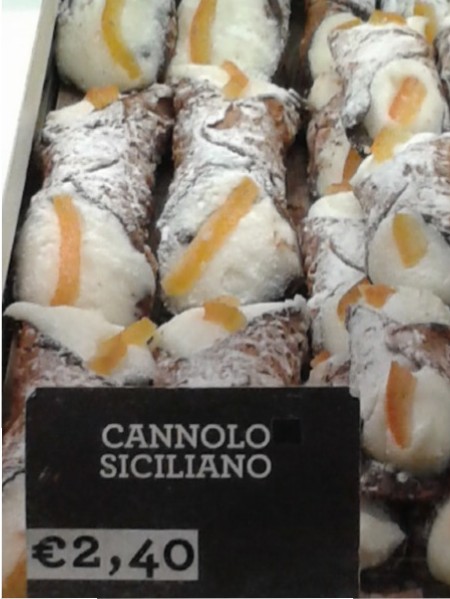 Anyone who remembers Cannoli at school will be drooling at the sight of these … Originating in Sicily it’s a favourite doesn’t matter where you go. 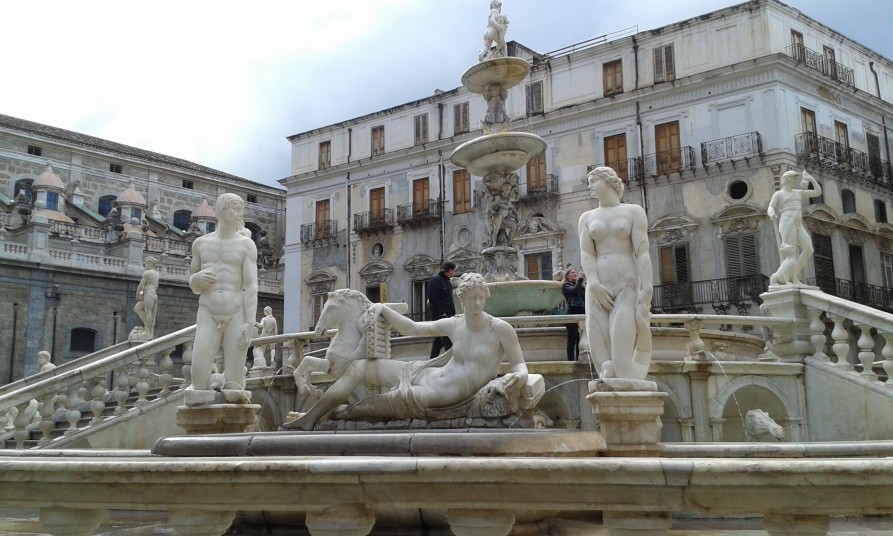 Walking around the centre of Palermo, it’s a photographer’s dream, an architectural adornment having weathered the test of time. All statues proudly showing off all their bits and pieces …

For cultural, artistic and economic reasons, Palermo is one of the largest cities in the Mediterranean and is now among the top tourist destinations in both Italy and Europe – easy to see why! 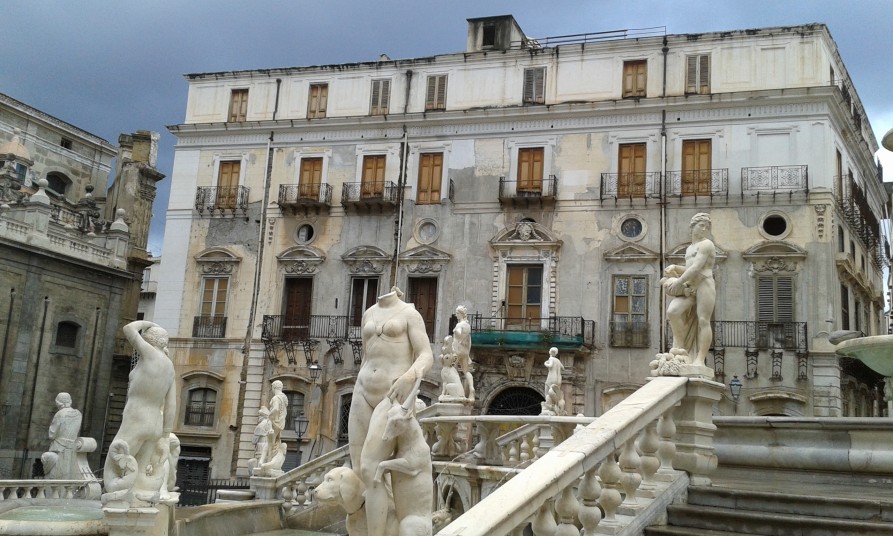 Yes sculptures galore, particularly in the central area and the city has a population of more than 676,000 people. Many will be delighted to see these beauties basking in the sun on a daily basis – which incidentally would be most of the time during the year. 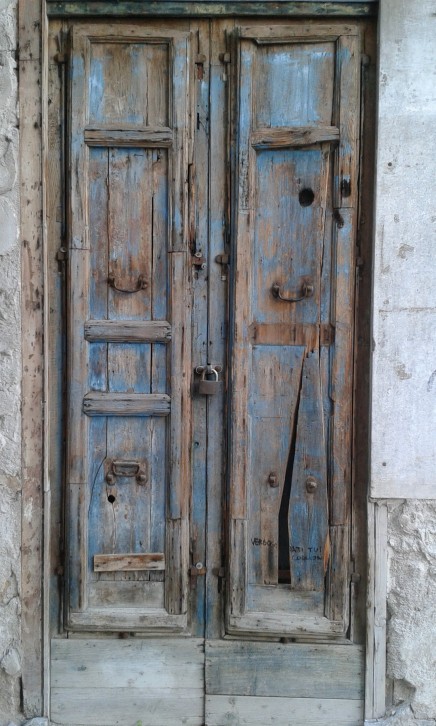 Interesting doorways have become ‘my thing’ of late. Wondering who had passed through these now closed doors? 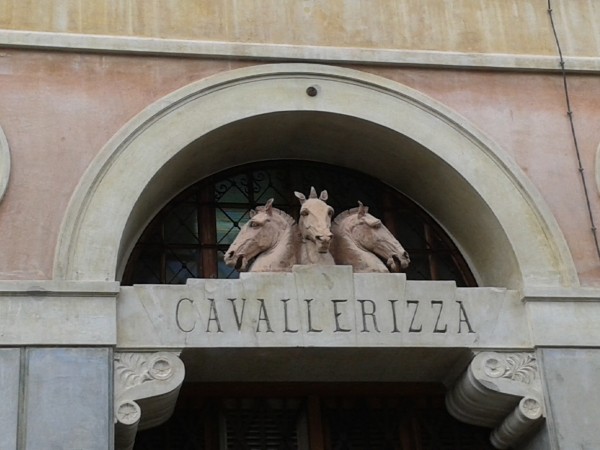 The Cathedral and Roman Catholicism is very important in Palermitano culture with the Patron Saint of Palermo being Santa Rosalia whose Feast Day is celebrated on 15 July. 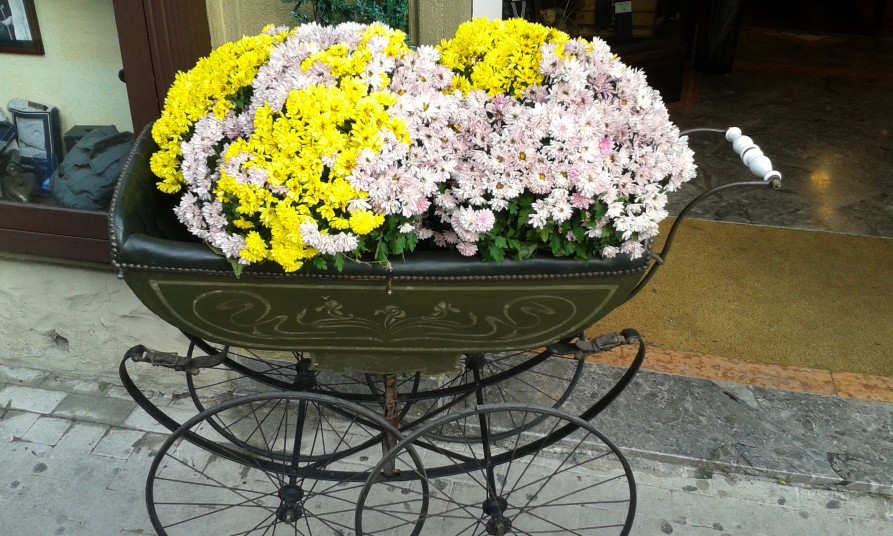 Lovely street scenes with florist shops full of colour and variety. Sicily is where you can pass through medieval villages and pristine historic centres; doesn’t matter if you’re on your way to crystal-clear waters lapping at white sandy beaches or just take a stroll through enchanting streets, stopping for an espresso or vino rosso and enjoy some people watching. 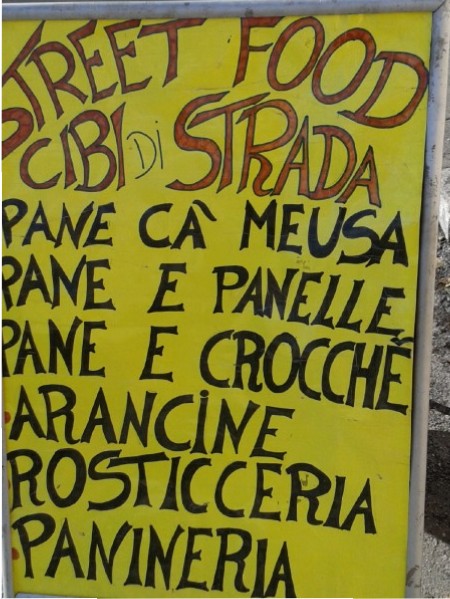 Did someone say food? 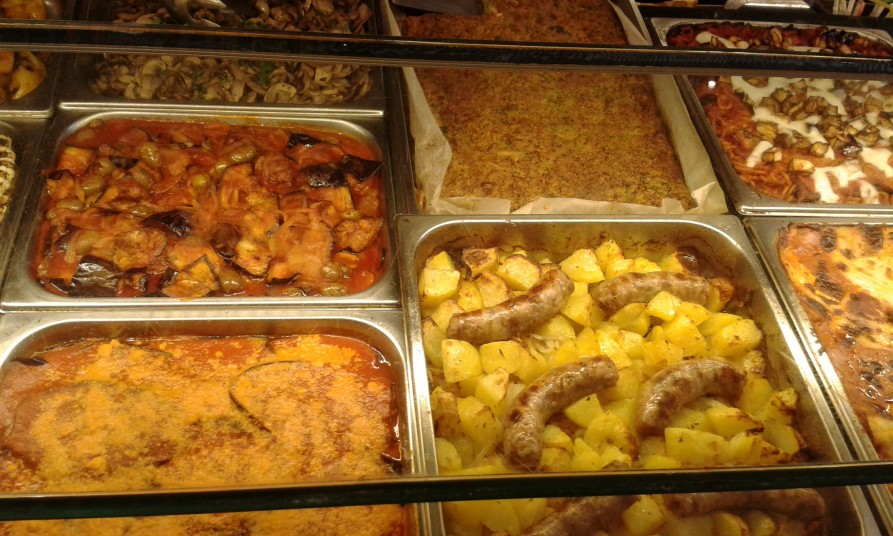 Although many traditional Sicilian dishes are termed Arab legacies, it is more accurate to say that they were born in Sicily and incorporated both Sicilian and Arab traditions as it’s renowned for its flavoursome derived ingredients. 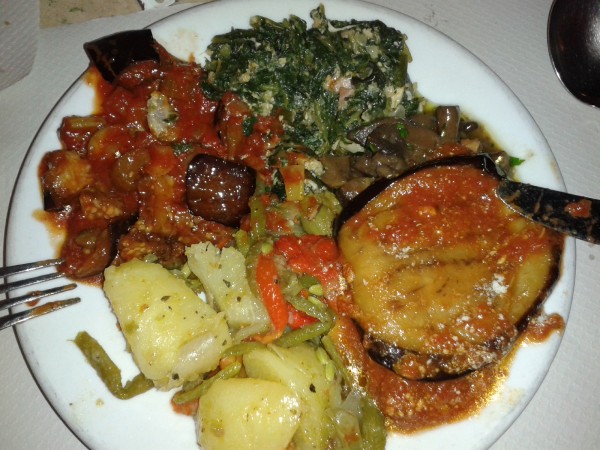 However, I found a cute little café, which as usual full of people with a mix of traditional and notably antipasti … And here at 4.00 euro, this was one of the best I’d encountered while swanning around Europe! Yum, couldn’t wait and starting eating before taking the photo … bit naughty!
Antica Focacceria Del Massimo – Da Basile Via Bara All’Olivella, 76, 90133 Palermo. 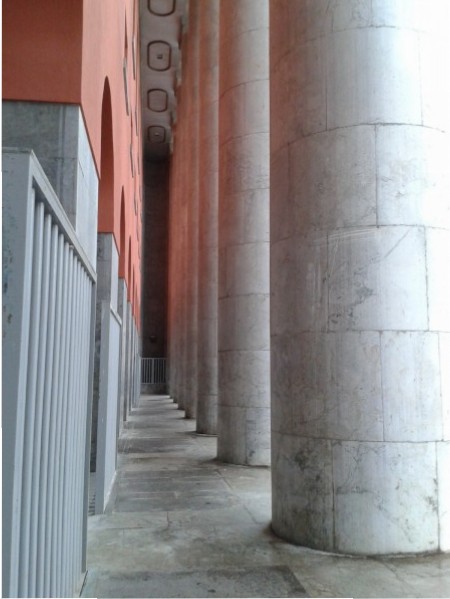 A quick trip to the Post Office with its monolith exterior is a reminder of the power and might of what was once the communications centre. Once inside, it was quiet and echoing with silence. No lining up at all. 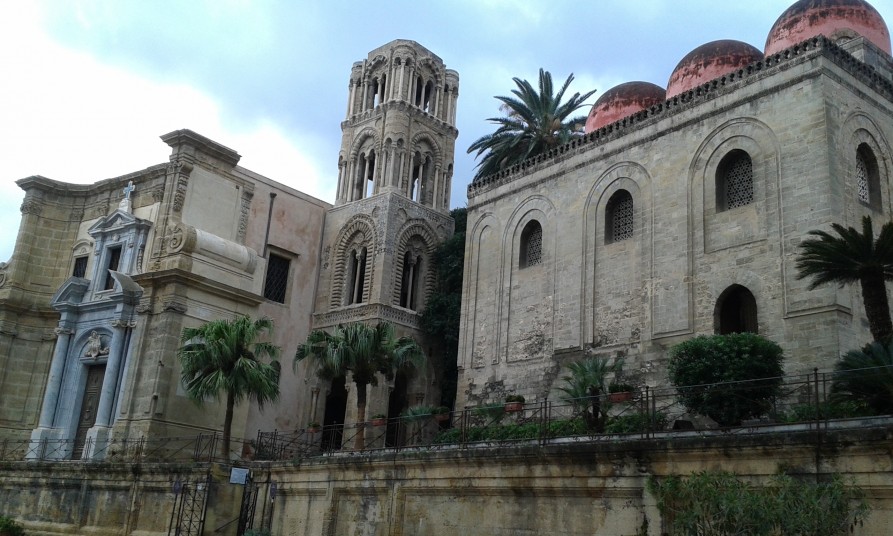 Back on the tourist trail to visit some of the better-known areas such as The  Chiesa di San Cataldo at the central Piazza Bellini. It’s an exceptional  example of the Arab-Norman architecture which flourished in Sicily under the Norman domination of the island.  In the 18th century the church was used as a post office, then in the 19th century it was restored and brought back to a form which was more similar to the original Mediaeval edifice. 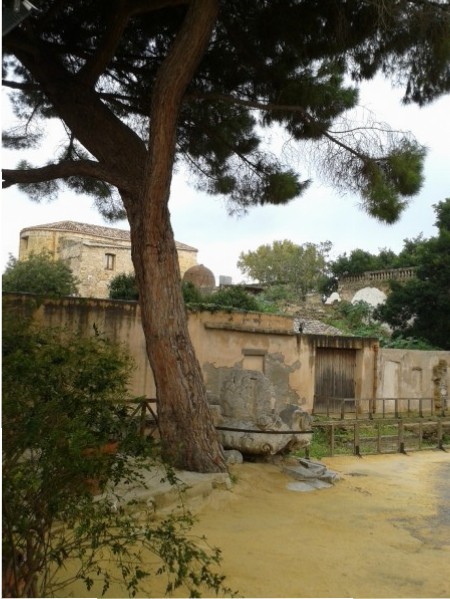 The Regional Archaeological Museum Antonio Salinas possesses one of the richest collections of Punic and Ancient Greek art in Italy, as well as many items related to the history of Sicily. 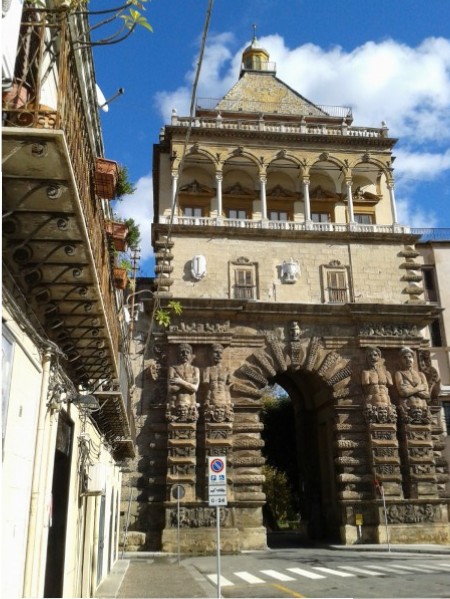 Just out of the city centre Palazzo dei Normanni and highest point in the area. Great for shopping, eating and just taking photos.

The Palazzo dei Normanni or Royal Palace of Palermo. It was the seat of the  Kings of Sicily during the Norman domination and served afterwards as the main seat of power for the subsequent rulers of Sicily. The building is the oldest royal residence in Europe, the home of the rulers of the Kingdom of Sicily and imperial seat with Frederick II and Conrad IV. 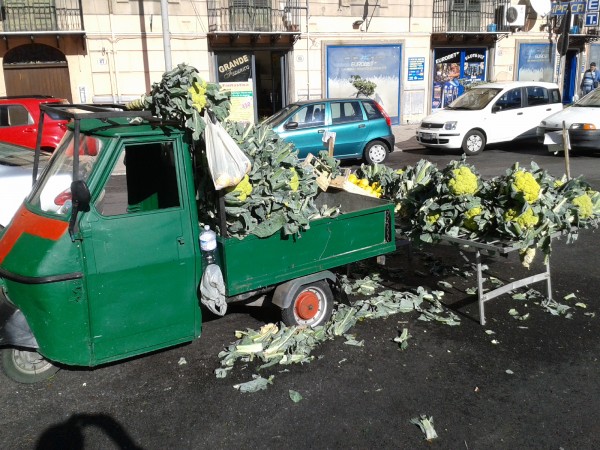 Must be in season … The area attracts significant numbers of tourists each year and widely known for its colourful fruit, vegetable and fish markets in the heart of Palermo, known as Vucciria, Ballarò and Capo.

Located on the western side of Palermo, popular ferry destinations include Sardinia, Naples, Genoa, Tunisia and Malta.

Bus, car and taxi are the best methods of getting to the Palermo Ferry Port which is located on Via Del Mare. It’s possible to walk from Palermo’s central train station to the port but beware of pick pockets. 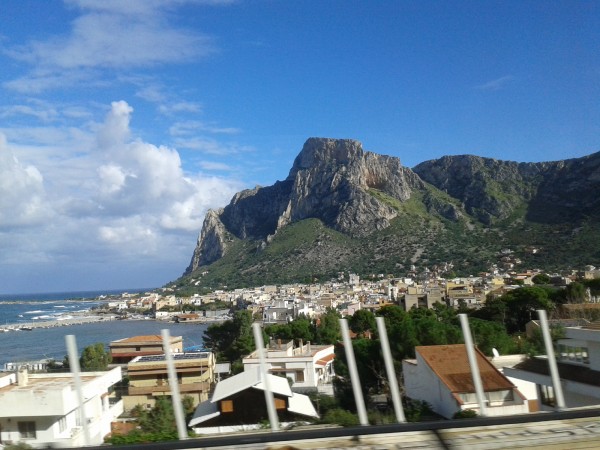