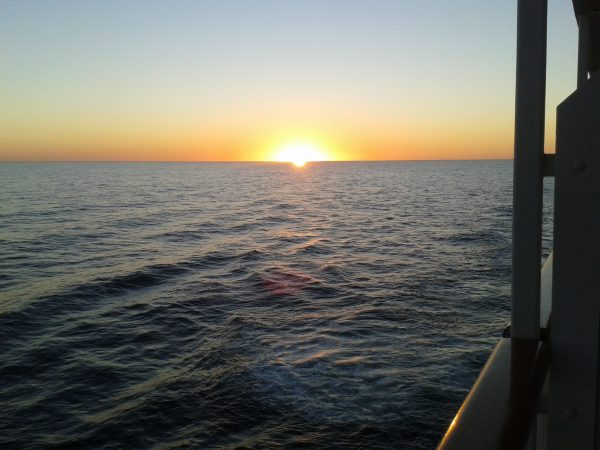 Leaving Brazil and onto Uruguay is definitely one of the highlights of a South American cruise and being onboard NCL’s Norwegian Sun. If you enjoy being on the port side of the ship (left-hand side of a vessel when looking forward), then you will see some of the most amazing sunsets. 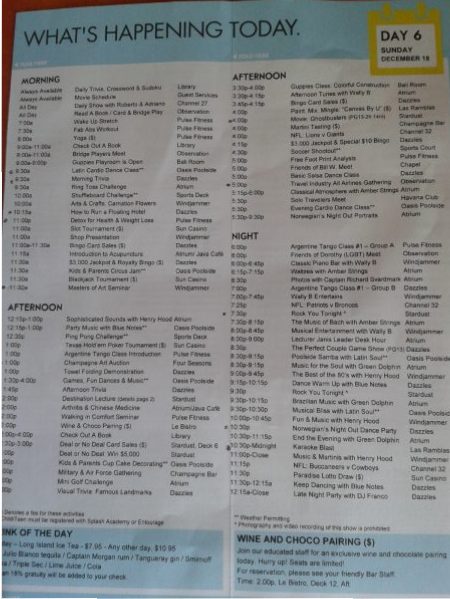 While at sea there was a myriad of ‘what’s happening today’ – not just ‘sea days’ but the whole cruise. I’m up to day six and still haven’t covered off many of the activities. Trivia was high on my list of must do items and the gym would have to wait. 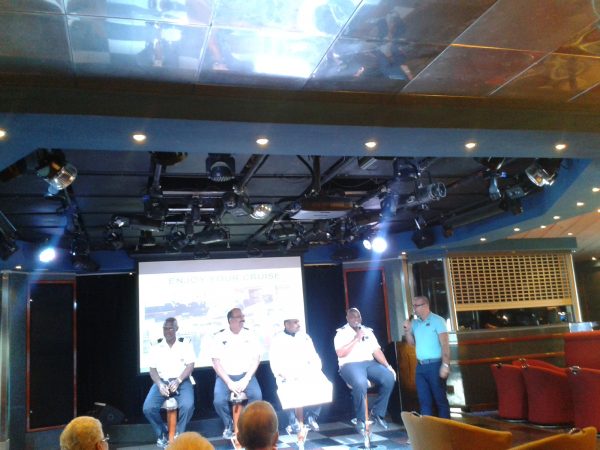 One of the best presentations onboard was the ‘How to Run a Floating Hotel’, which was hosted by one of the staff members who introduced us to the head of various departments. They spoke about their responsibilities such as ordering, catering and waste management along with budgets and keeping the passenger happy. 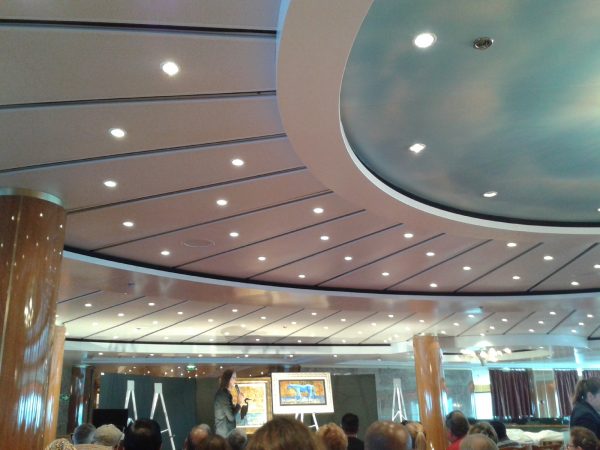 Art auctions were on for two days whilst at sea and so many bargains to be had with renown artist’s work going for a fraction of what you’d pay in an art gallery. 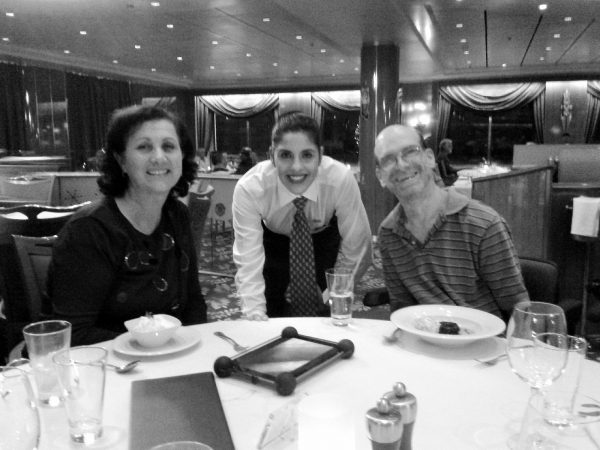 One really great aspect of the cruise, early each evening there was a solo traveller’s meet up in The Library which offered the chance for other like-minded travellers to say hi and have dinner together if they so wished. I spoke to Ron who is less mobile than many of us and asked about his cruising history. Without doubt he’s an avid cruiser and he said his first priority was to look for an itinerary which he considered plausible. We are with the lovely Abigail who is from Argentina and looked after us all at dinner time. Meals were ‘freestyle’ which gave everyone the freedom to eat when they chose to do so and not be bound to a set time and table each night. 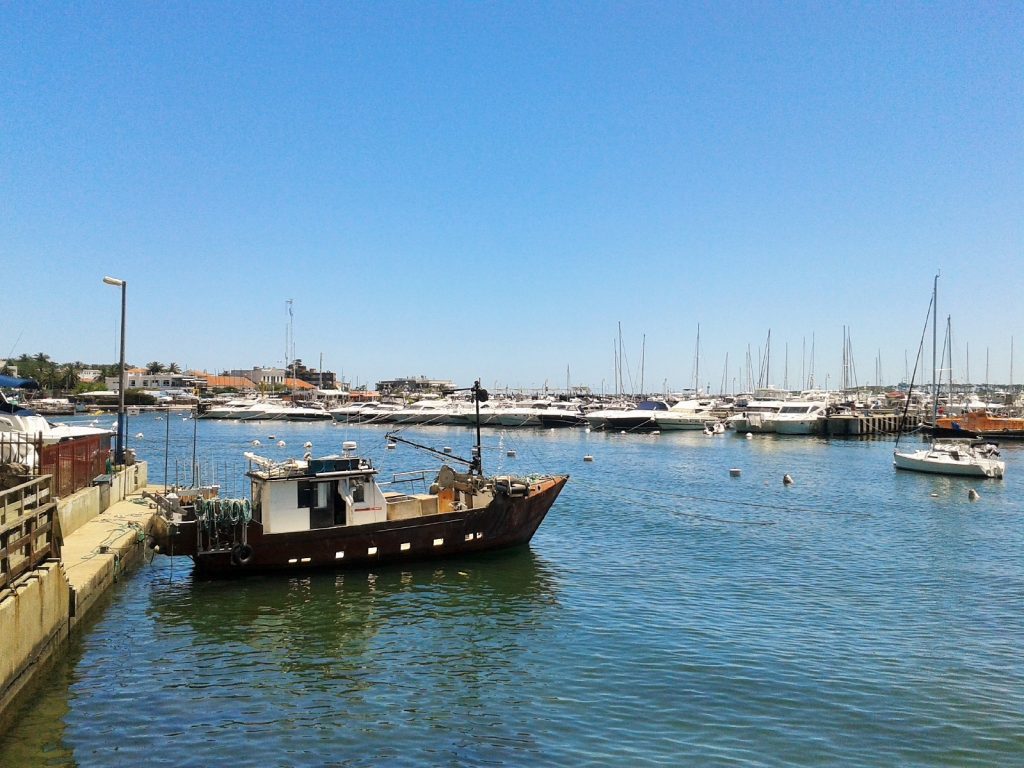 Our first port of call in Uruguay – Punta Del Este and it’s definitely a tourist hot spot without doubt for the rich and famous. Numerous yachts  and sea vessels moored close to the maze of eateries along the harbour. There’s an abundance of fashionistas to be seen even early in the day for a light salad – I assume. 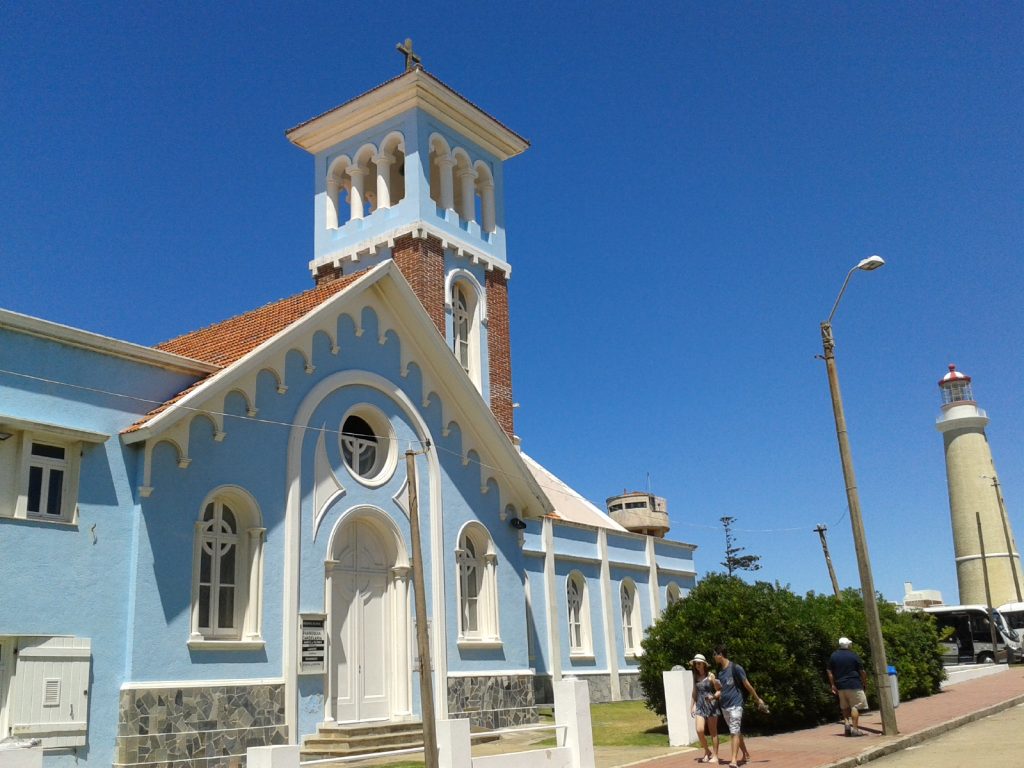 Lovely to walk around and see the wonderful architecture at Punte Del Este. Glorious weather and a typical summer day. 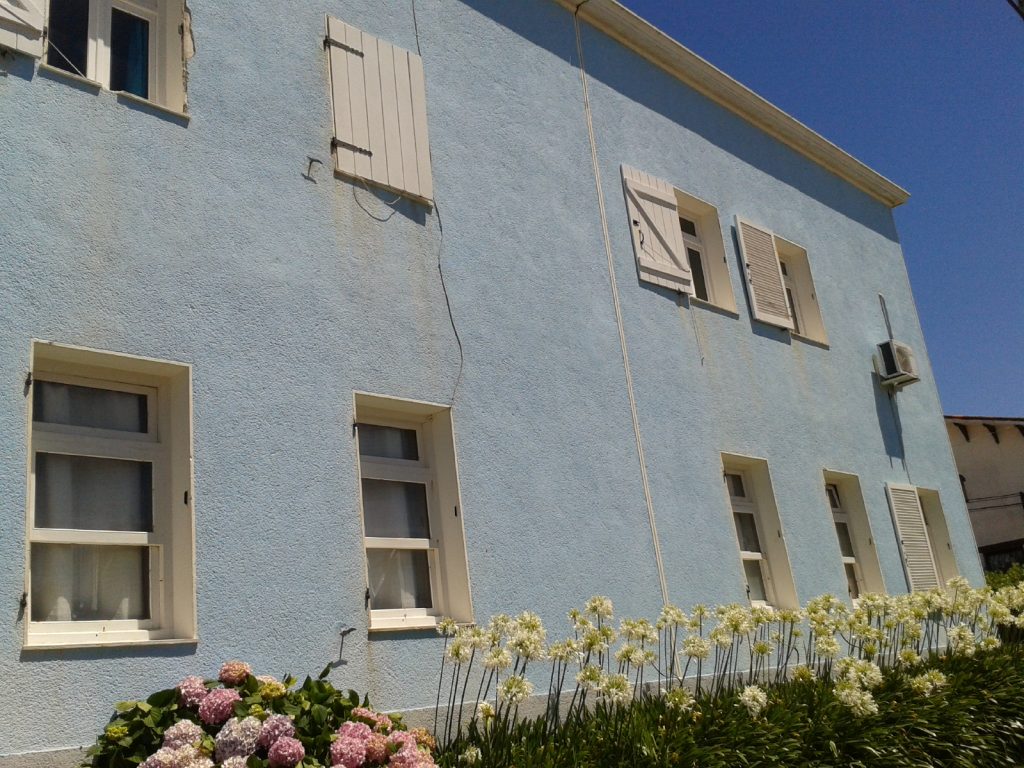 Homes are simply delightful with a European feel. There were many differing styles of buildings too which made it so much more interesting to walk around and take photos. 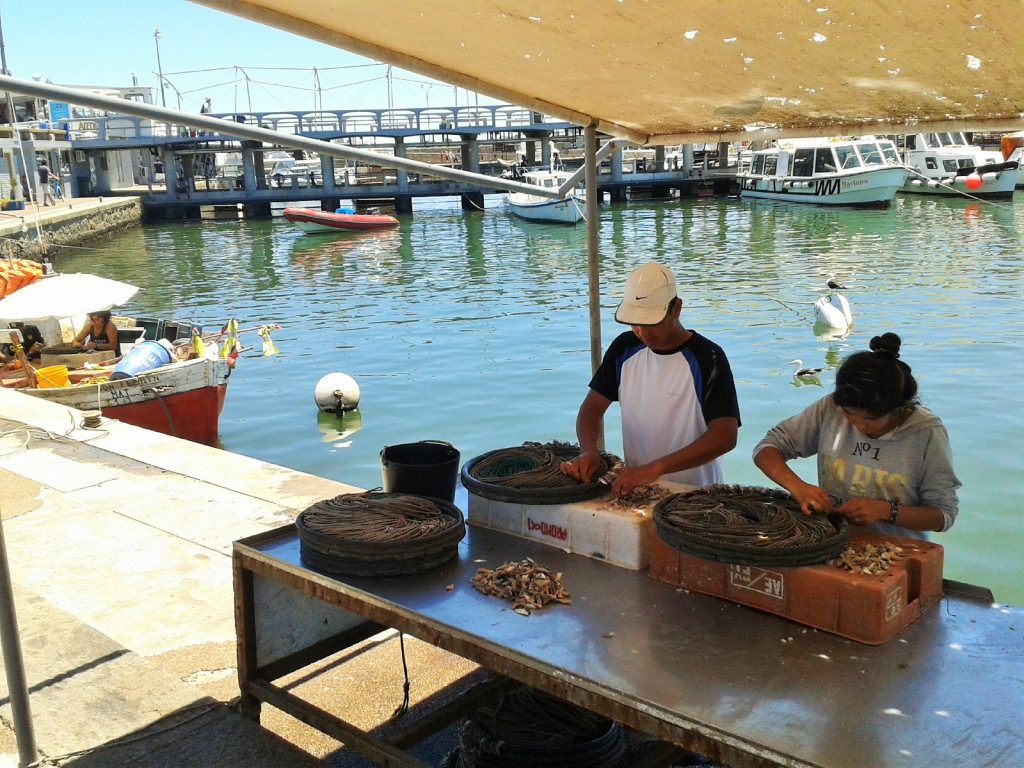 No shortage of seafood here and fresh as … 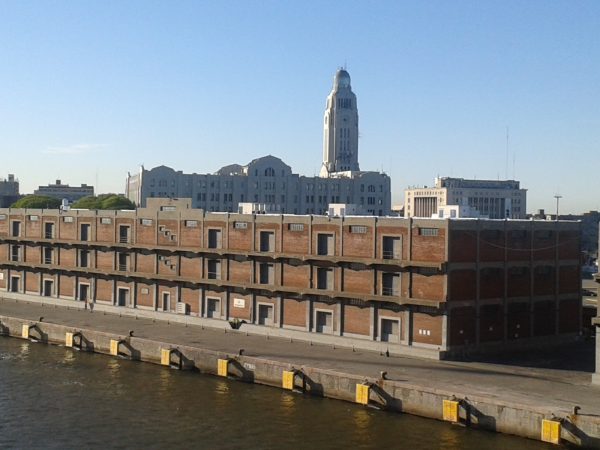 Entering Montevideo Port after an overnight sail was really a highlight being on my list of places to visit and the chance to catch up with a long-time friend. In the distance we can see Palacio Salvo which is central in the city and many were ‘chomping at the bit’ to go ashore and experience Montevideo’s offerings. 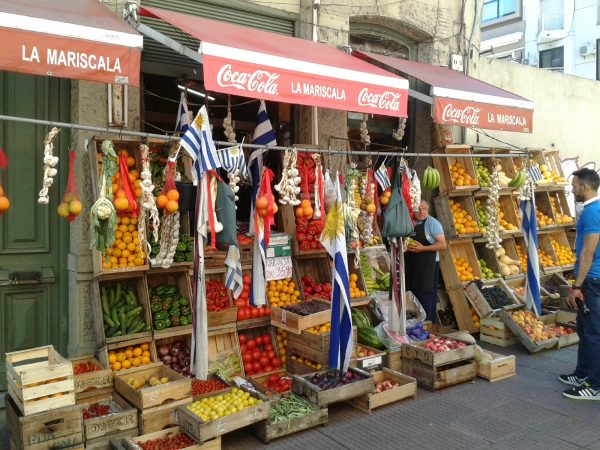 Markets are straight across the road from where the Norwegian Sun has docked and no tenders needed here. Countless yummy markets, shops and tempting eateries all along the way into the Ciudad Vieja (Old City). 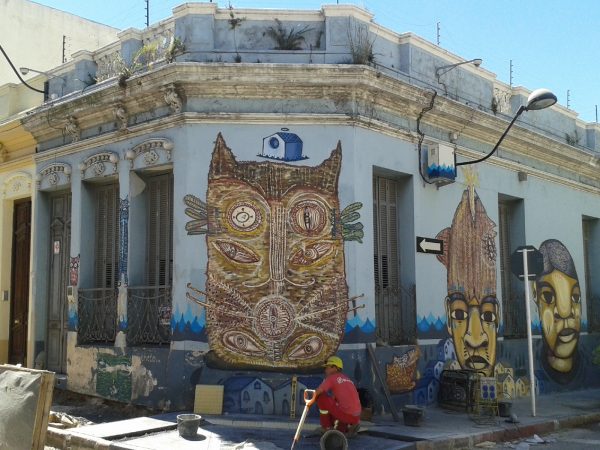 Thought-provoking street art to keep you amused and it doesn’t matter which street you walk in. This capital city is home to some of the most innovative and daring stencil art and graffiti on the continent. 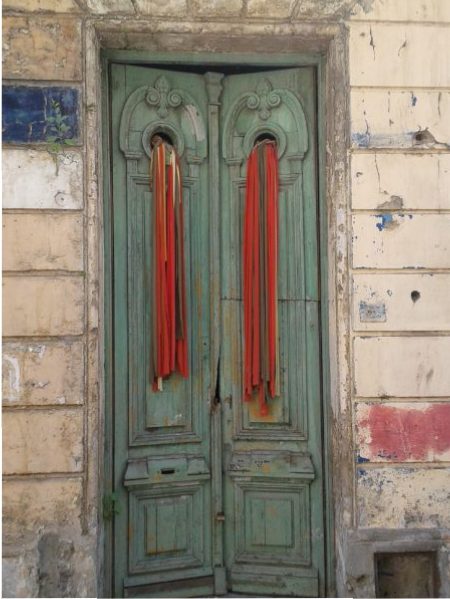 Think I already said previously I just love taking photos of old doors. Bet they’d like to tell a few secrets if they could … 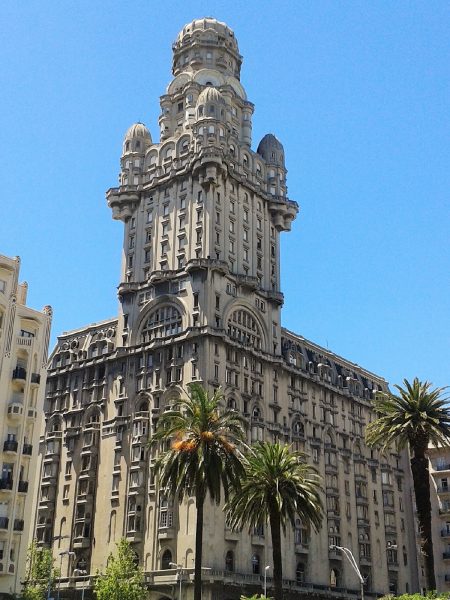 Spectacular architecture and this is what we could see in part as we docked early in the morning. Fascinating to see the magnificient Palacio Salvo up close. The building was originally intended to be a hotel, but this plan didn’t work out and it has since been occupied by a mixture of offices and private residences. 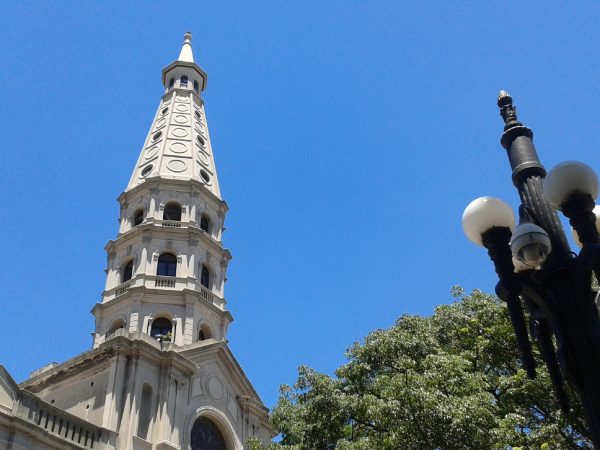 There’s so much more to see and do in Montevideo, I would recommend at least a three-day stay here on another visit just to soak up the atmosphere and friendliness of the people. 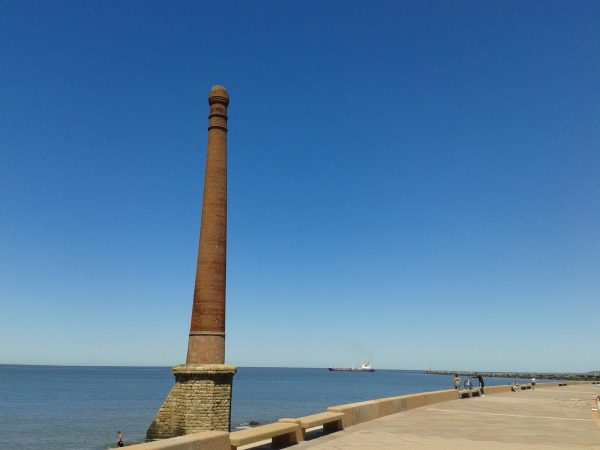 Walk around the harbour foreshore is a pleasure and quite peaceful. Though I might not say that at the end of a working day as I’d imagine many locals would be out and about enjoying it too. 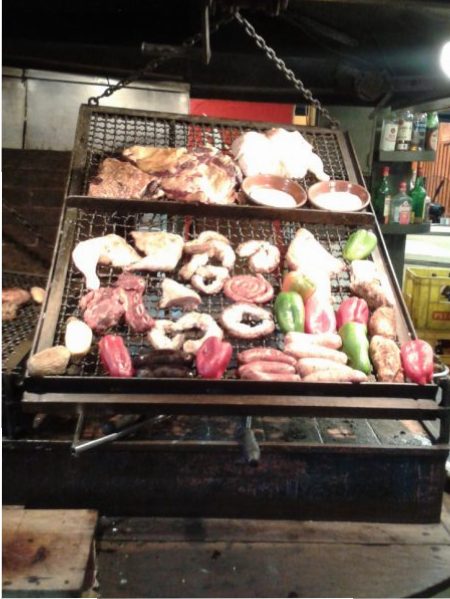 Did someone say ‘meet up’? Well the smoke, which takes hold of the Port Market and its surroundings at midday is clear evidence of what happens inside the venue. Even day workers were here to enjoy a hearty lunch before the weekend’s tourists hit town.

The best samples of Uruguayan cuisine; from chivito al plato (a steak with ham, cheese, tomato, lettuce, and mayonnaise) or a la canadiense (the same steak in a sandwich version) up to the best and most simple meat cuts, achuras (offal), asado (grilled meat), chicken, matambres (stuffed meat rolls), chotos (plaited intestines), pamplonas (grilled stuffed-meat) and other delicacies are popular in this corner of the world. 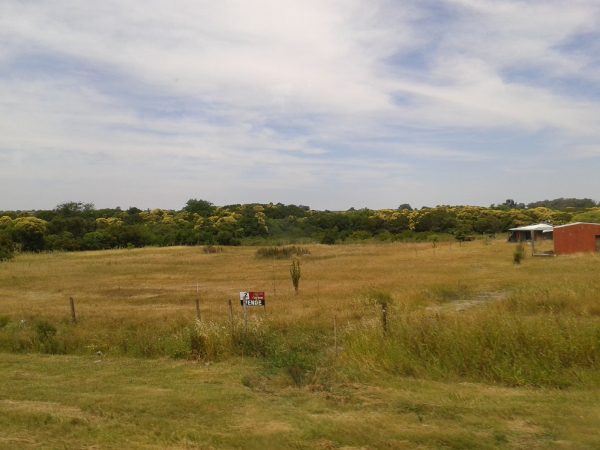 Landscape is similar to Australia and I felt very much at home in Uruguay due to the weather and scenery being similar to many country locations; especially central NSW in Australia. Uruguay and Argentina are almost the same latitudes as Sydney , so if you’re thinking of travelling to South America around September through to December you’ll be pleasantly surprised. Historically I’ve found flights from Australia are usually cheaper for the month of November. 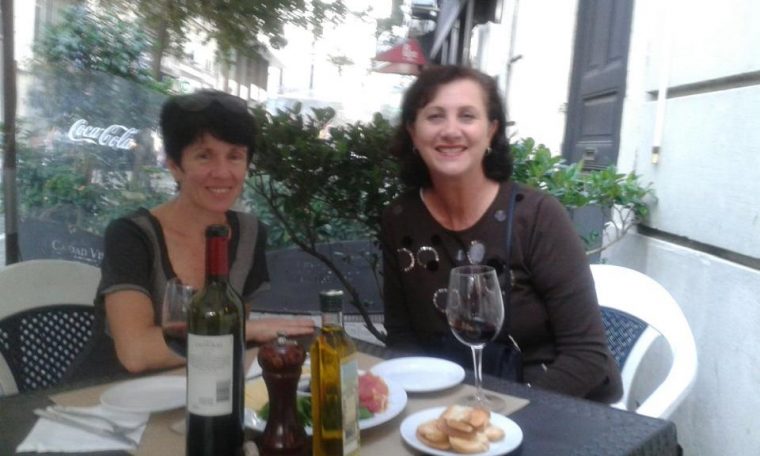 But best of all, catching up with my long-time friend Dinorah at Bacacay Restaurant in Montevideo for a Christmas drink and canapés was the ultimate treat before heading off again. We’d met on a Moroccan tour many years ago and luckily for us the advent of the internet and email has kept us in touch.

Salute and the malbec was a pleasure too … just wish they’d grow more of it at home.