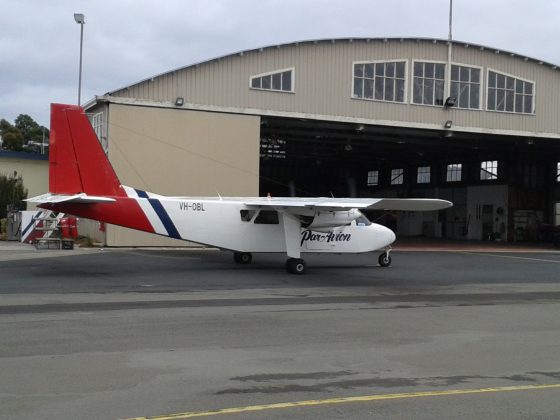 I’ve flown out with Par Avion Wilderness Tours to the Southwest World Heritage Area at South East Cape, Tasmania’s most southern point and then made our way west onto to Melaleuca.

The aircraft shown here will fly you into this remote area via the south west coast. Departing Cambridge Airport, we flew via the D’Entrecasteaux Channel, past the mouth of the Huon River and on to Recherche Bay. 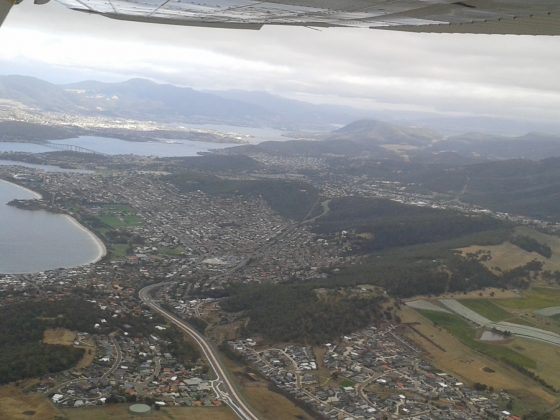 At the start we’re looking out over the city of Hobart, Tasmania’s capital and as we gain altitude, we can see how spread out and far reaching the residents live in Australia’s smallest state and least populated state capital. 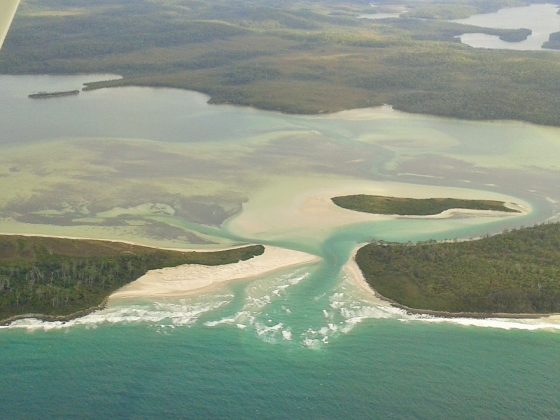 Beautiful clean coastal estuaries in a pristine part of the world can be seen from above, and thankfully it’s part of Tasmania’s Wilderness World Heritage area.The 85km South Coast Track runs between Melaleuca and Cockle Creek. There are no roads to Melaleuca, so walkers must either fly, sail or walk in and out. 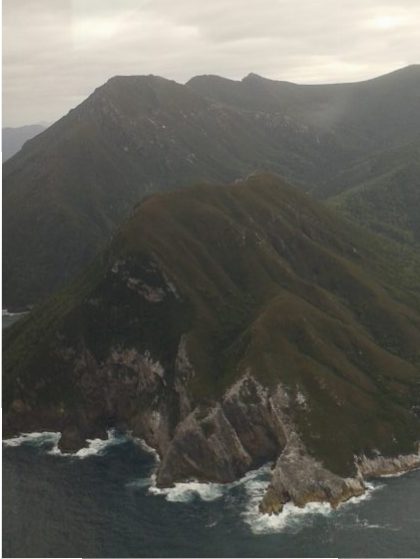 Extremely rugged coastline as well – no pathways along this particular region of the state. It’s recommended you gain experience on other Tasmanian walking tracks before attempting the South Coast as you will be a long way from help should you need it. 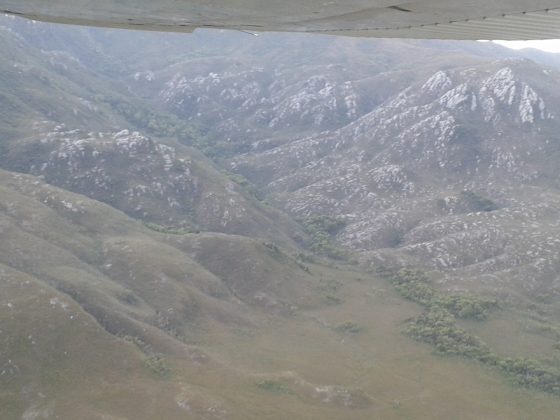 I’m not even sure if hardy goats could live here… extremely desolate. 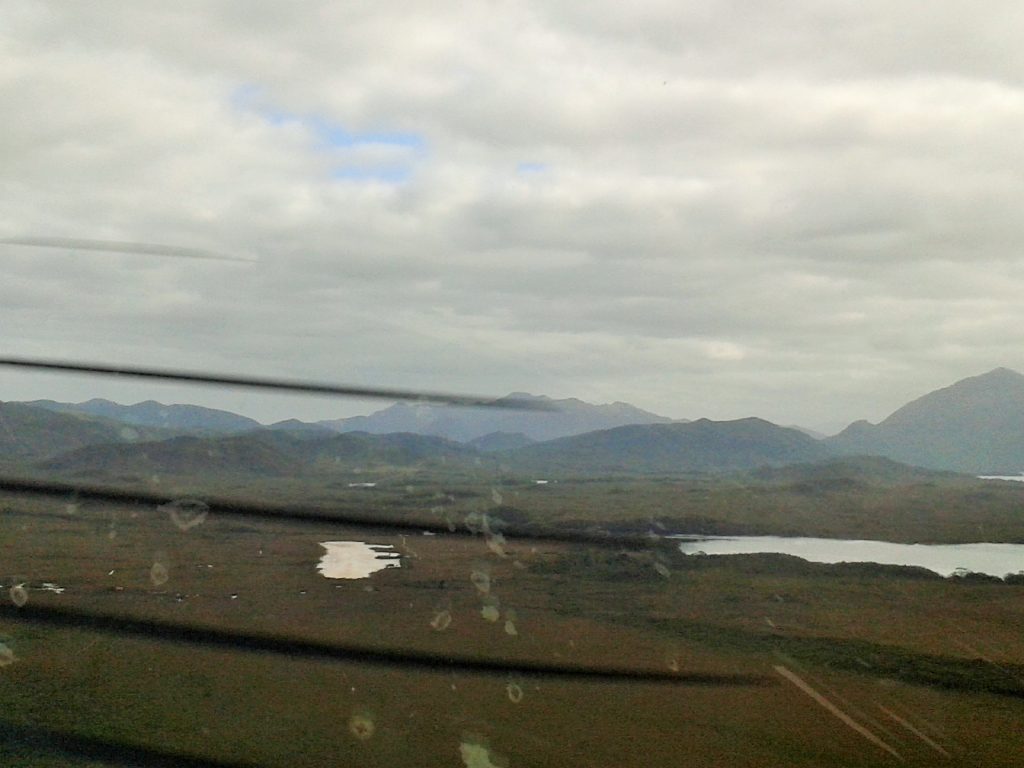 We’re now approaching the landing strip at Melalueca in the Southwest Cape of Tasmania. And, as much as I love being in the front seat, sometimes I just have to close my eyes … 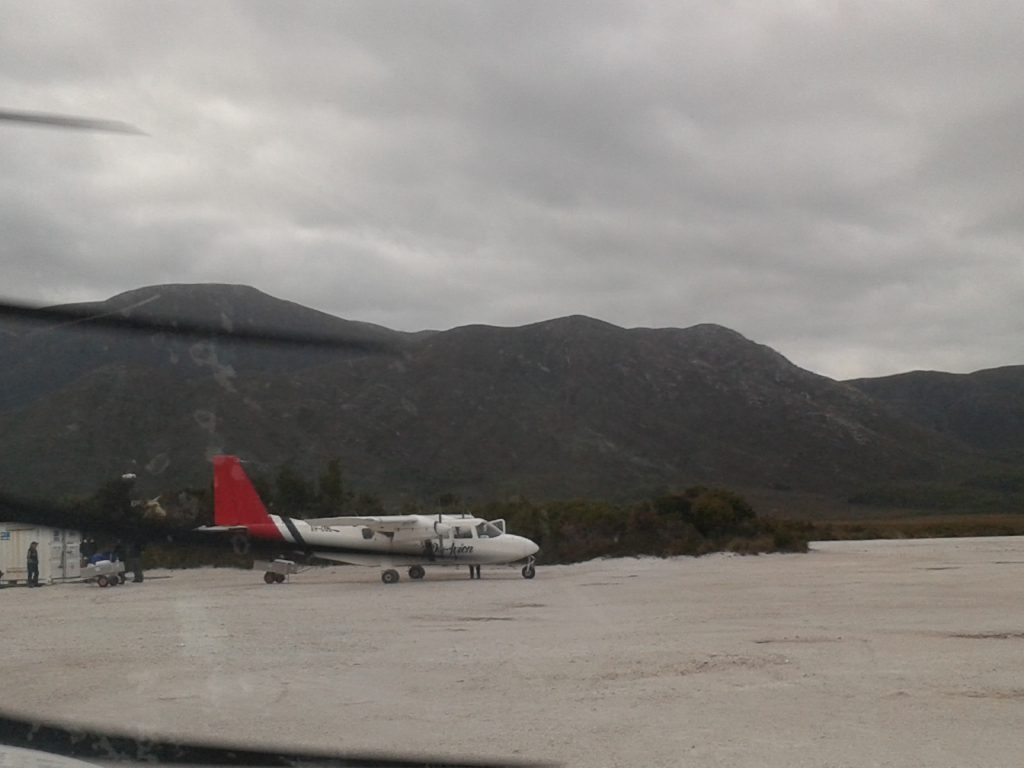 Once we’d landed, we could take stock from a ground level the vast, raw beauty of the somewhat dramatic scenery – any film maker would be proud to include this in a set for wild imagery.

This is not the warmest day in April, but then again, I don’t believe even in the Summer months the South East Cape would reach high temperatures. As long as we’re clear for take off later in the day, I’m happy to be here to view the majestic surroundings for the next couple of hours. 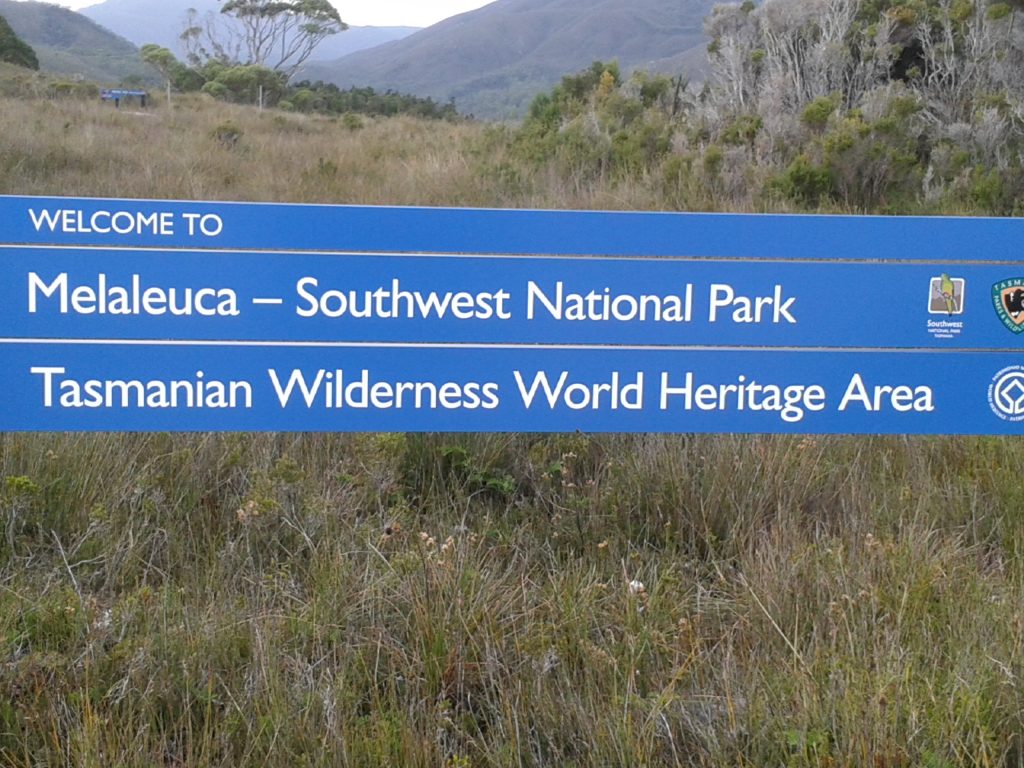 Welcome to Melaleuca in the Southwest National Park which is the southern most national parkland in Australia. The southern and western reaches of the region are far removed from any vehicular access and therefore the area is largely unaffected by humans. 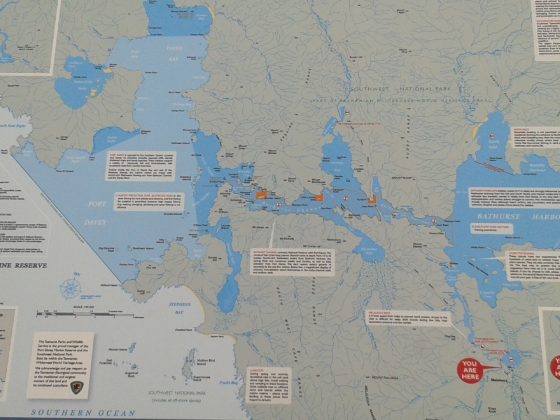 Don’t you love these kind of maps which show ‘you are here’? Incredible to see the actual scale of the region. 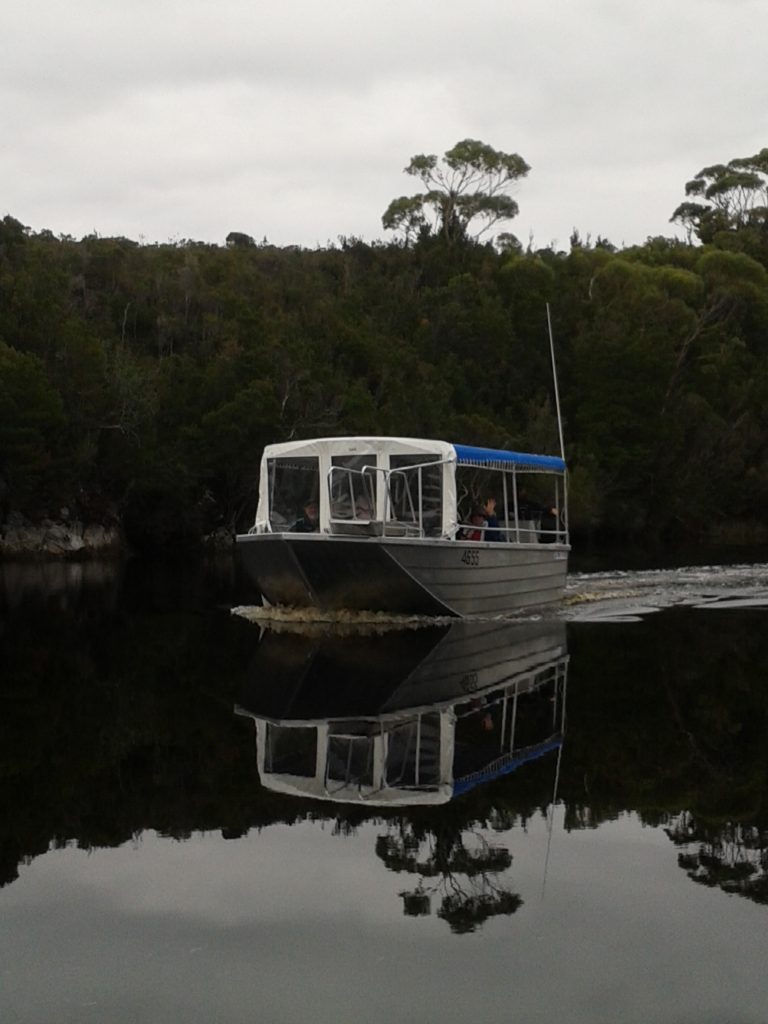 Giving a bit of a wave to earlier arrivals in the day for a boat outing towards Melaleuca Inlet, then into Bathurst Harbour and Port Davey. 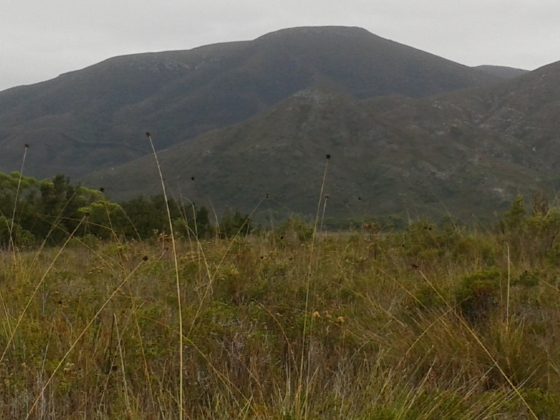 While here on the ground you can witness the wilderness from a viewpoint being at a grass-roots level with the cleanest air you’ll ever have the pleasure of breathing. 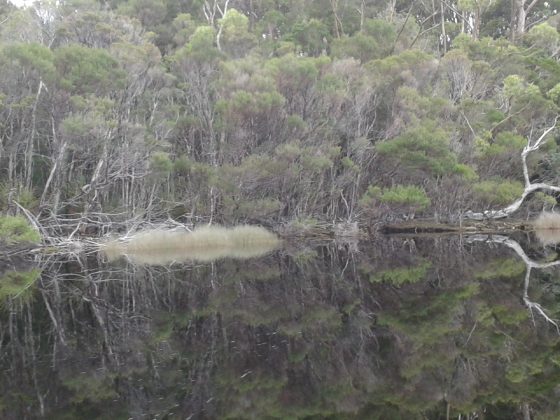 Serene yet spectacular all along the waterways towards Bathurst Harbour in our little boat. Glad they know where we are at HQ! 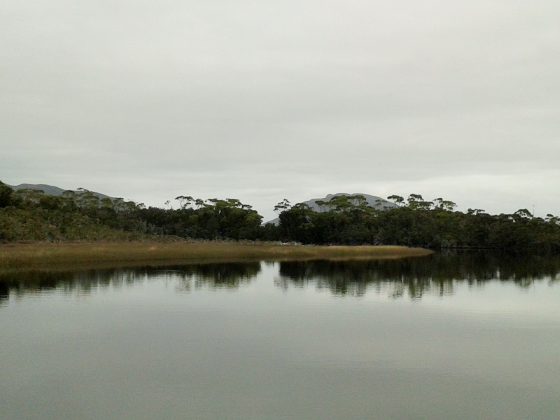 What sometimes appears to be freshwater on a map may turn out to be brackish if close to the sea. 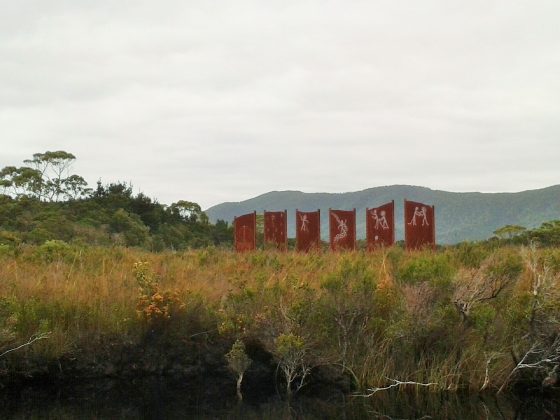 There’s the opportunity to take an informative stroll along the Needwonnee Walk as well which is an award-winning Aboriginal interpretive experience and then visit the Deny King Memorial Bird Hide. 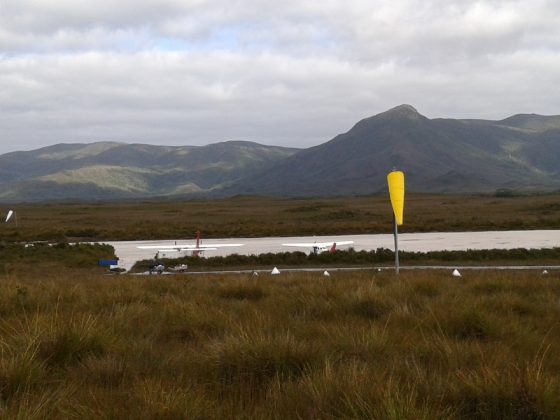 Readying for our departure, we reboard our aircraft and return to Cambridge Airport via the spectacular Eastern Arthurs and Federation Peak, then continue down the Huon Valley and over Hobart city for an overall bird’s eye view. 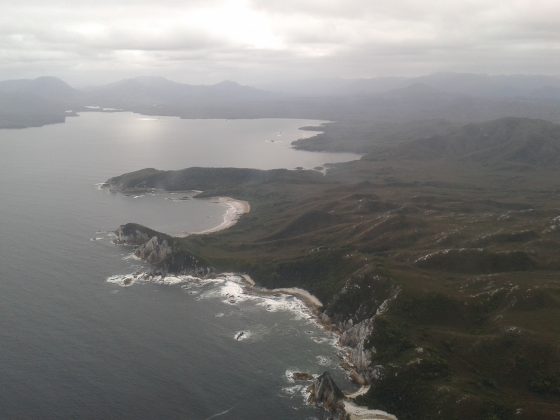 At South Cape Bay, there is no track down to South East Cape (the southernmost point of the continent). There’s no point leaving the South Coast Track either to try and reach it as it’s an impassable coastline in most parts. Additionally,  if you’re ever walking along narrow or rocky beaches at high tide, beware of large wave swells as they are treacherous. 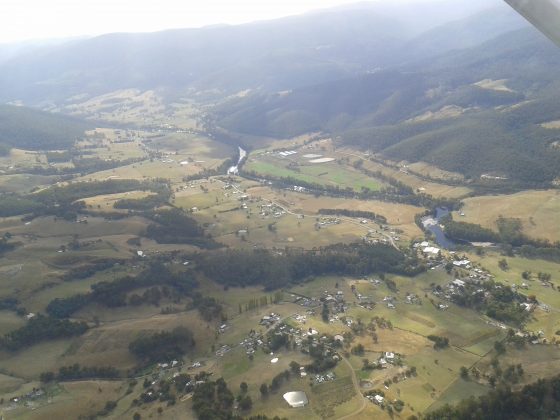 Heading back into Cambridge Airport (close to Hobart Airport), we’re now navigating over farmland and small communities which are on the outskirts of the city. 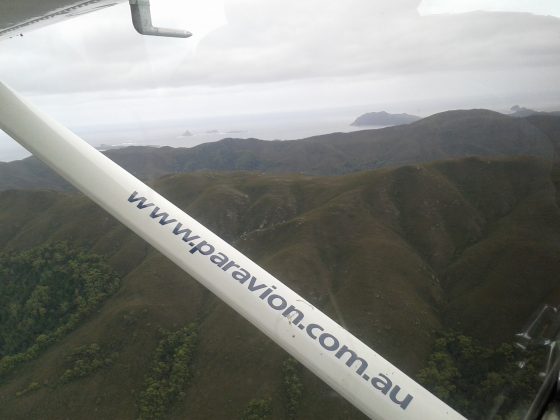 For bookings with Par Avion services, visit  http://www.paravion.com.au or telephone (03) 6248 5390  as you won’t be disappointed – especially if you’re short on time – there’s half and full day outings with weather permitting at different times of the year. 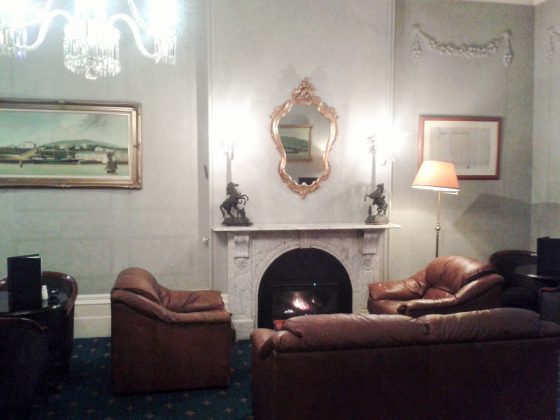 At the end of the day, you’d probably want to treat yourself to a cocktail and relax in the warmth of the very regal Lenna of Hobart Heritage Hotel and savour the day’s experience in having seen one of the world’s greatest national parks – both from the air and being on the ground.

And yes, the accommodation is  beautifully appointed in a modern spacious room with spectacular views up to Mount Wellington. Plenty of bench space to work from if need with free wireless internet (WiFi). Individually controlled heating and cooling and a Nespresso coffee machine is just perfect. Complimentary onsite car parking is a big plus if you’ve been travelling around like me.

This landmark hotel is a 1874-built sandstone mansion which puts you right on the historic doorstep of Hobart’s vibrant waterfront. The Lenna Hotel Hobart is within walking distance to Salamanca Markets and the harbour whereby there’s a myriad of restaurants including fresh seafood and many other culinary regional delights.