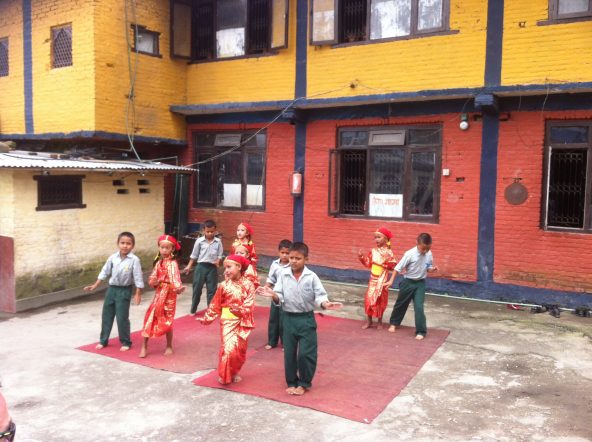 Our group stopped at a school on the way back towards the Kathmandu Valley to inspect some of the more earthquake affected towns of 2015. The school children at Ketaaketi gave us not just a tour of their class rooms, but showed us their talent as dancers too! I know I’ve said it before and I’ll say it again, but please give some of your excess stationery items such as pens and paper as it’s always greatly appreciated to any school you may wish to offer them. 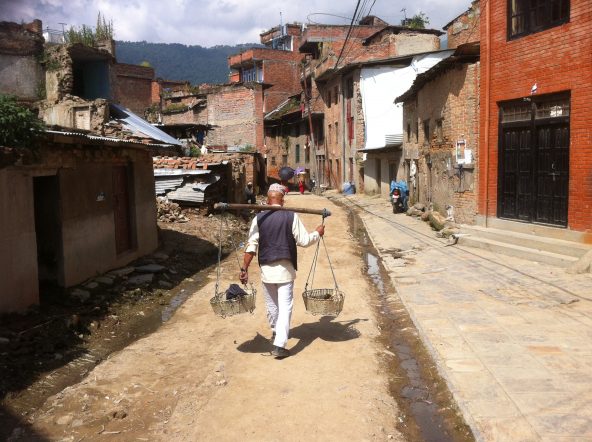 Visiting earthquake ravaged places such as Khokana which is a traditional Newari village, people went about their daily business as best they could considering the amount of damage which had been caused. 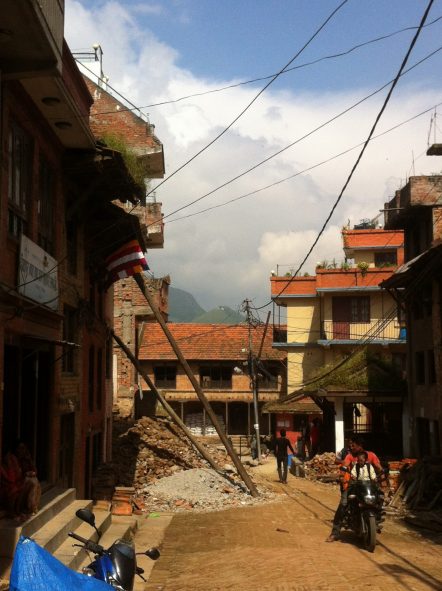 Buildings in need of repair are very slowly being reconstructed. Unfortunately, the community cannot afford to pay for the heavy machinery and skilled labour needed to remove the rubble. 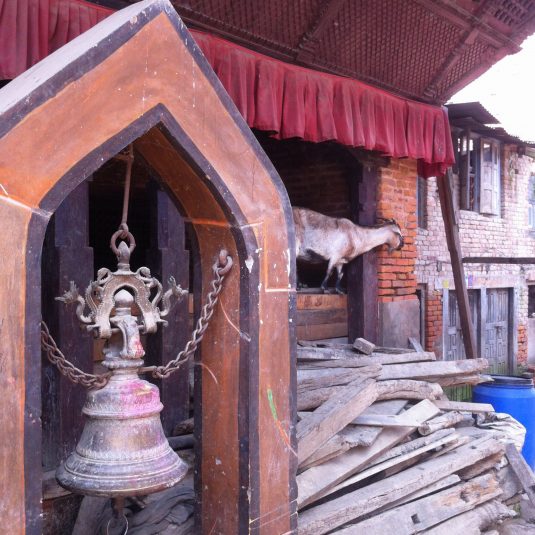 Goats always seem happy no matter where they are, there should be more people like goats – maybe that’s why Aries is my compatible star sign? They seem to have a natural curiosity like this fella. 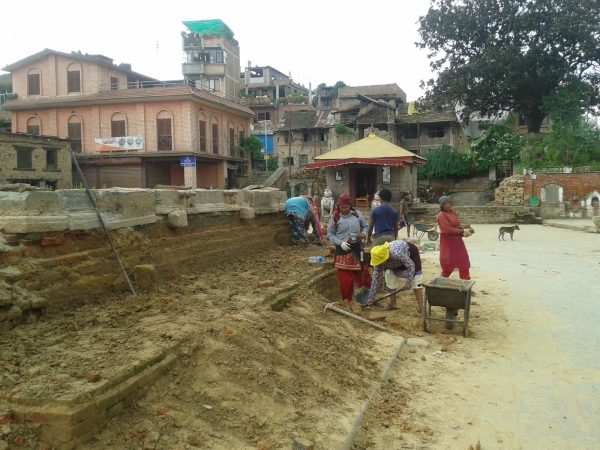 Ladies were also involved in the heavy workload in shifting debris from some of the temples which were destroyed and hopefully enough funding will be forthcoming to restore them. 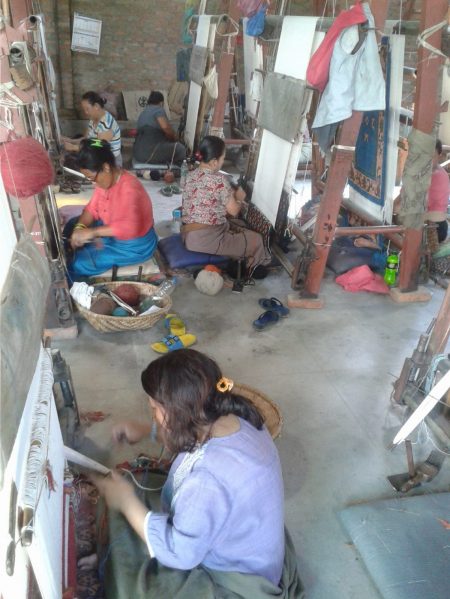 Ladies hand weaving carpets at a Tibetan Refugee Camp which allows them to earn an income as their skills are highly sought after for the creation of magnificent woven rugs which are offered to the international market. 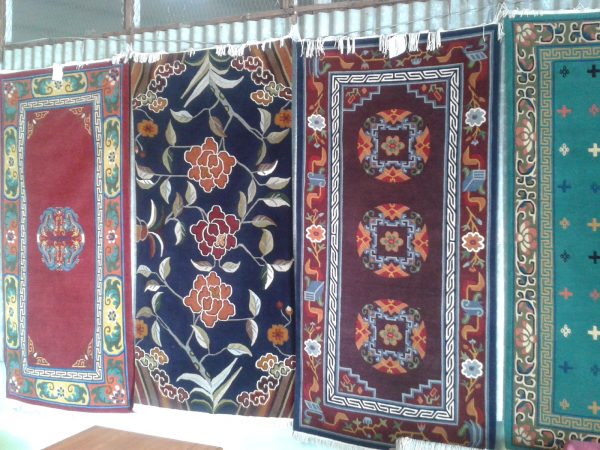 Exquisite rugs on display of hand-knotted wool and silk  – a purchase of a life time. 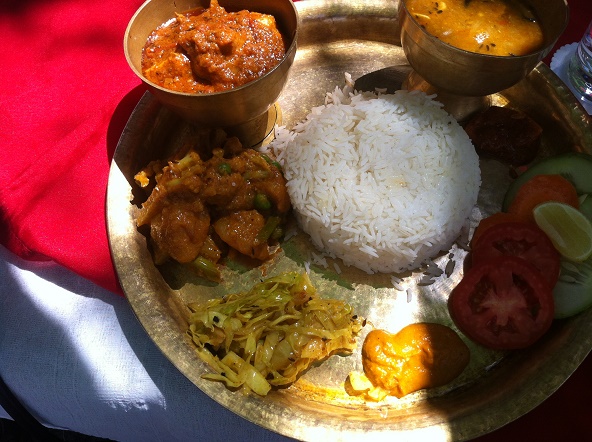 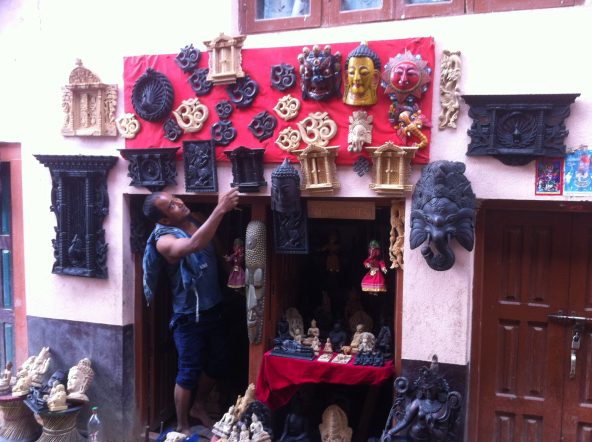 So many well-made handicrafts makes choosing difficult and it’s best to declare these coming back into Australia as wooden items are subject to scrutiny. Wouldn’t be too happy losing one of these to Customs. 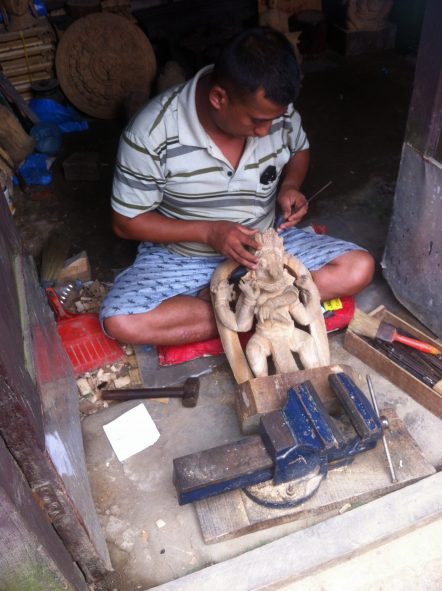 As you walk along the streets, you’ll find dozens of masterful wood carvers and sculptors offering you handcrafted items at bargain prices. Most of them work from home and they may even offer you other articles for sale as well. 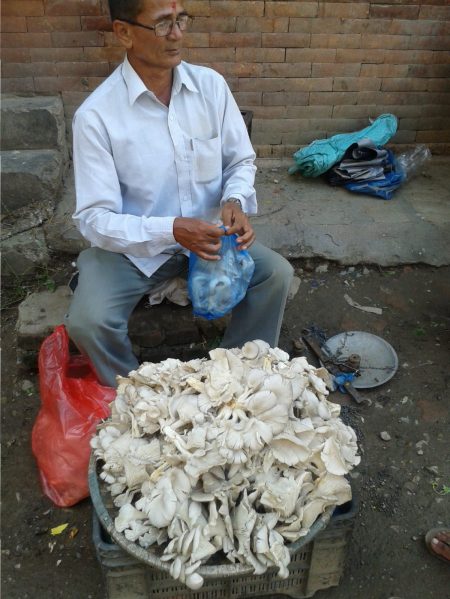 Mmm look very much like mushrooms on steroids, wonder if they’re magic ones? 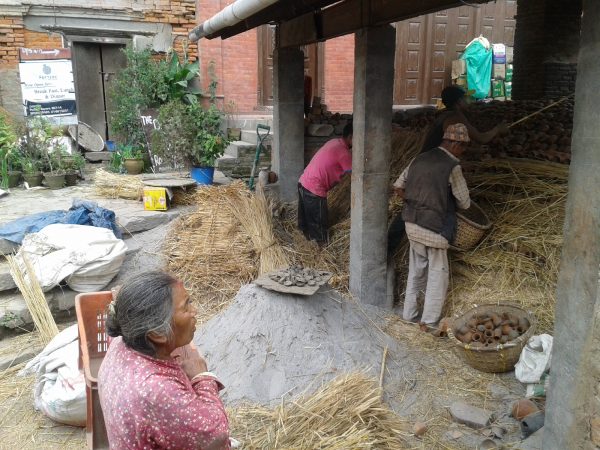 Pottery being made by this family for over six decades at Bhaktapur. 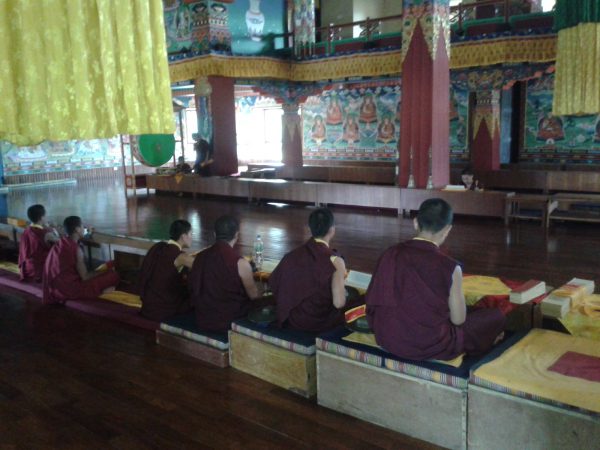 Staying at a Buddhist Monastery Guest-house in the peaceful location of Neydo Tashi Choeling was a highlight of our journey with Australian tour operator Crooked Compass. 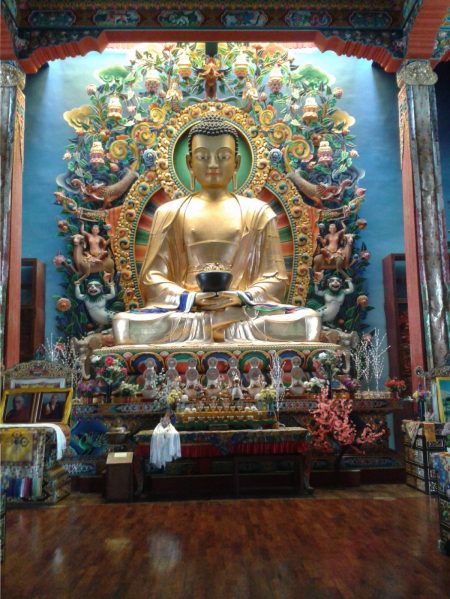 At 5:00 am the bell rings for the monks to wake and make their way to the main hall to chant for about one and half hours for world peace. As well as prayers of aspiration and longevity, they are offered to the upholders of the Dharma. 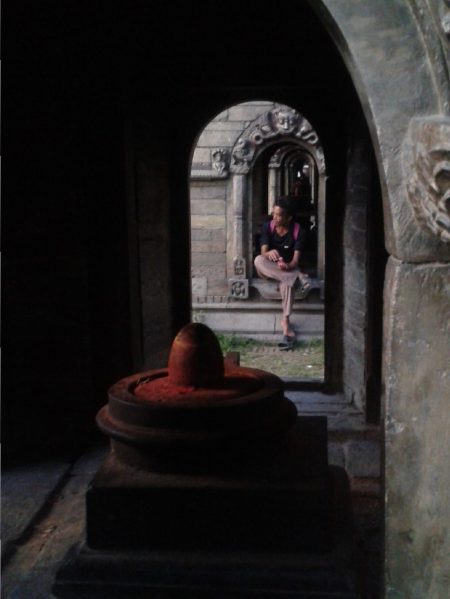 At nearby Patan it’s a time to reflect at the Pashupatinath Temple  which is a famous sacred Hindu temple and located on the banks of the Bagmati River, 5 kilometres north-east of the Kathmandu Valley. 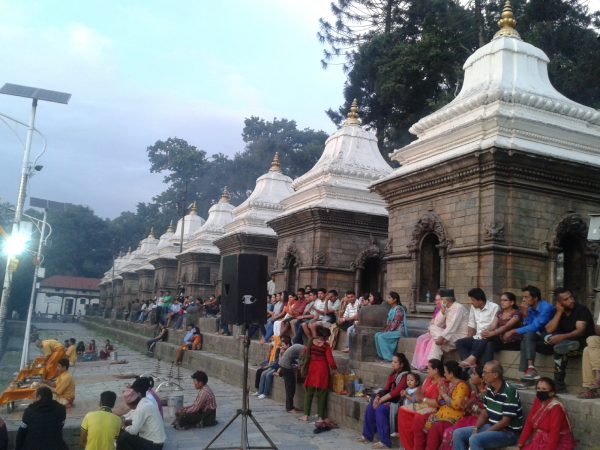 We were honoured to witness the ongoing celebration and cremation of many Nepalese people who have just recently passed on. 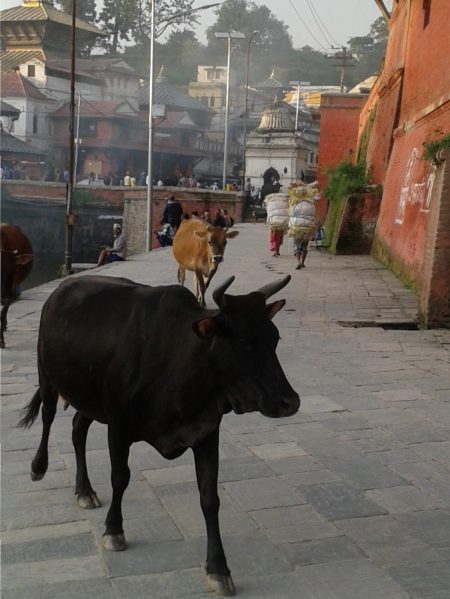 Cows meandering around oblivious to the crowds who gather here daily to observe the ritualistic cremations. 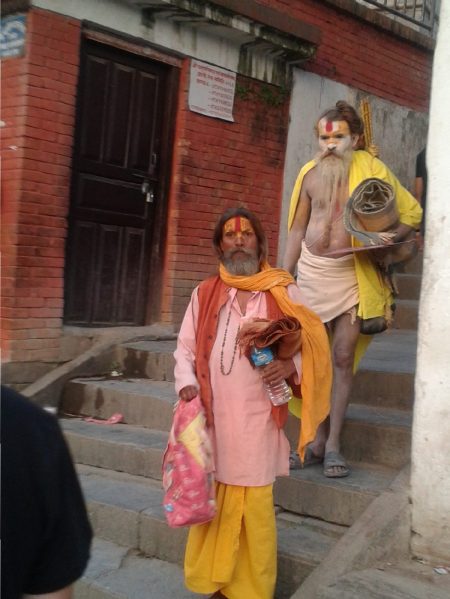 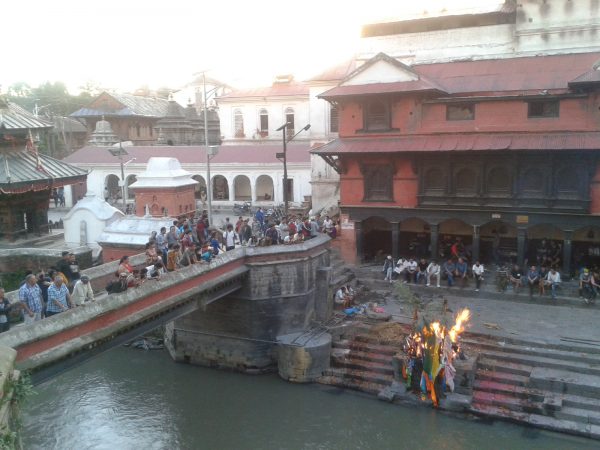 Cremation Ghats of the Pashupatinath Temple and at the holy Bagmati River (which is a tributary of the Ganges River), a funeral fire was already burning as we arrived in the late afternoon. 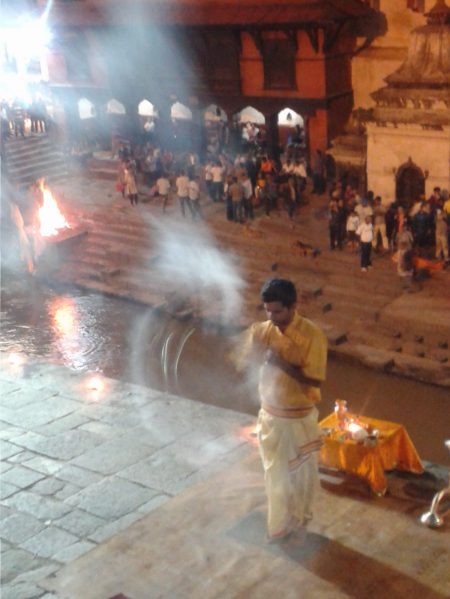 The Ghats in essence, welcomed families carrying cloth-shrouded bodies on stretchers and prepared them for the formality whereby each was carefully unwrapped. Then, the bodies in turn had their feet washed in the river water and laid on a prepared pyre – all the while prayers from the family members being said to the lost loved one. At the top of the Ghats were stacks of wood where families of the deceased had arranged for the cremation.

Shown here, the Aarti is the magnificent event during the evening as it allows you to experience the great act and fills you with inherit spiritual thoughts, particularly of your own mortality. All the priests who perform the Aarti wear the same cloth and perform with the same brass lamps which are accompanied with the customary mantra chant. And, in the presence of a huge crowd who is also gaining momentum in dancing and singing along, it’s mesmerising and almost hypnotic. 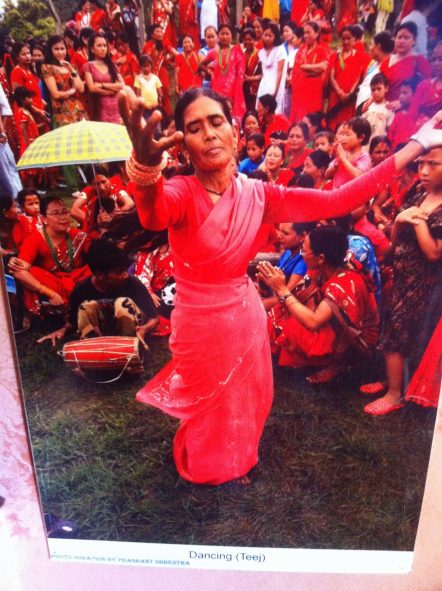 The true heart of Nepalese culture is seen during the many festivals that are held in the country. The multitude of different religions and sects that are present in the country lead to more festivals than days of the year. There may be celebrations throughout the country, in a city, or in a village of a single neighbourhood  and family. These are moments to unite the people, even if apparent to different castes or ethnic groups which share the same values ​​and prayers together for the good and happiness in the future.

The dates of the festival changes, as most of them is linked to lunar cycles and Buddhist, Hindu or Nepalese calendars and they do not correspond to the Gregorian calendar. 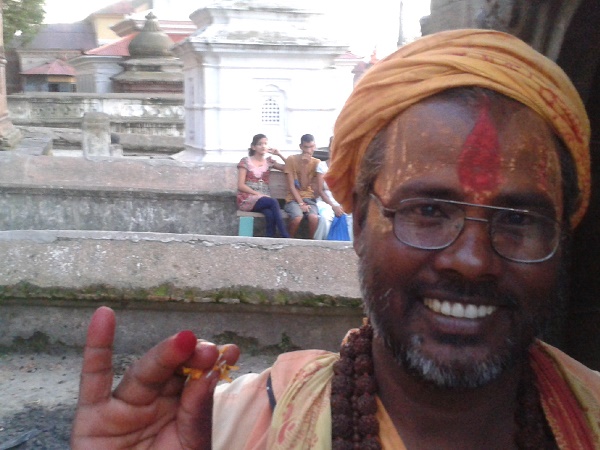 Smiley faces of the Nepalese makes you want to return in the future without doubt … Namaste!