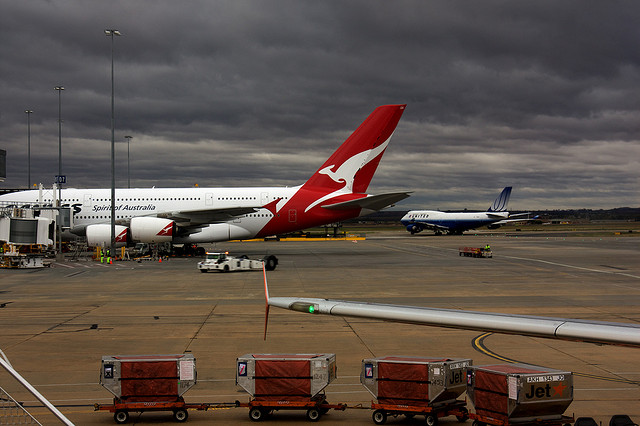 From Sydney to New York flying with Qantas Airways takes you via Los Angeles with a quick transit of about two hours there. Clearing immigration at L.A. (as it’s the first point of entry into the country) is mandatory – which means collecting your luggage and rechecking it at a dedicated area before heading onto your final domestic destination within the United States. As with all fares and airlines ex Australia, two pieces of baggage to North and South America is permitted, and if all travel is ticketed as a through fare, then the luggage will go as well as part of the international ticket’s allowance. The piece system has very much the same rules as a round-the-world-airfare and with Qantas being part of the Oneworld Alliance and along with its affiliates, you can check the website for more information about sizes, weight and other services.

Flying time to Los Angeles from Sydney approximately thirteen hours and then another four hours to New York City with QF.

For all other carriers, check with the carrier for their own stipulations in regards to checked luggage and carry on allowances.

Australians are required to have their ESTA application filled out online and paid for before departure and it’s valid for two years. https://esta.cbp.dhs.gov/esta/ 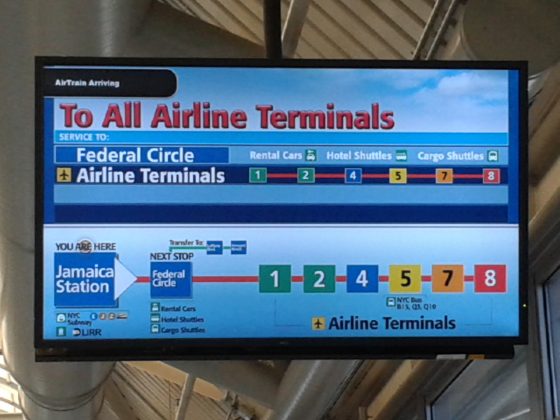 Upon arrival in New York City, JFK Airport offers passengers ground transport options which include services by rail to the NYC Transit Subway system and Long Island Rail; as well as buses and taxis with dedicated desks just before exiting the airport.

If taking a train, it will mean hopping off the free Air Train at Federal Circle then continue onto Jamaica Station (separate ticket US$5.00) which gives you the ability to catch another train onto Manhattan’s main Penn Station for further connections by train or bus. 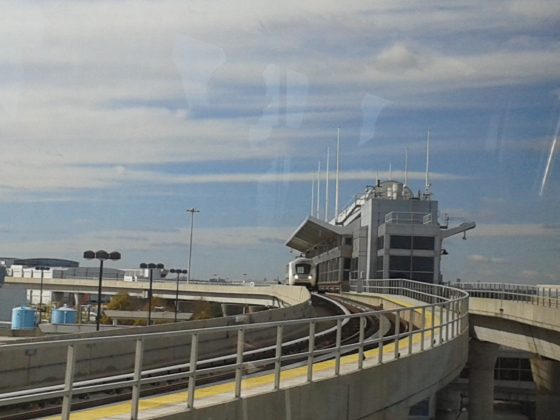 If continuing onto another domestic flight and other destinations, the free driverless air train will whisk you across for all other terminal departures. Participating airlines are listed onboard for their respective terminals and should be printed on your electronic ticket.

Terminal 8 if connecting to American Airlines and it’s the last stop on the loop. 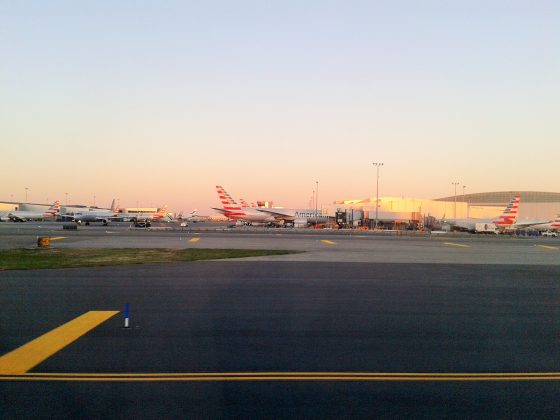 American Airlines provides passengers a more streamlined service with online baggage which is through checked if issued on the same international long-haul ticket – regardless if on a codeshare flight with Qantas Airways. 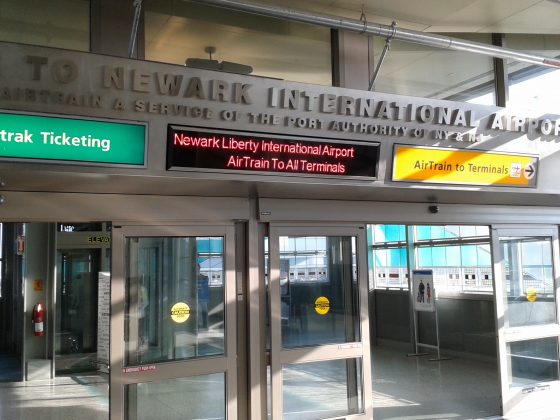 If travelling across to Newark Liberty International Airport for other flights, you can take a bus as there are a number private companies which operate between the three airports of JFK, Newark (EWR)  and La Guardia (LGA). However, if you’re savvy enough, a train may be the faster, better option if connections are tight. Traffic at times can be congested and somewhat stressful if going by bus, taxi or hire car. 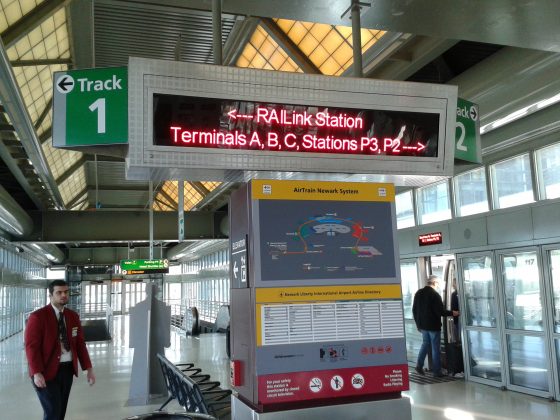 Additionally, you can continue to travel with NJ Transit which will bring you directly from Manhattan’s Penn Station with its dedicated platforms for the train to the Newark Airport stop in New Jersey.

Shown here, it’s where the Rail Link station joins and allows passengers to alight for another free air train to all other terminals within Newark Airport (EWR).

Amtrak trains stop at Newark Airport as well and again, just walk across to/from the free air train for your onward journey. The NJ Transit system not surprisingly, can actually be much quicker than taking a cab or bus and much more affordable.

Pictured here at Newark’s P4 stop it’s also where all the major hotels’ shuttle services may offer a complimentary transfer. Check with your hotel to see if they participate, otherwise taxis are generally available. A hire car company is located within P4 too at the ground level. 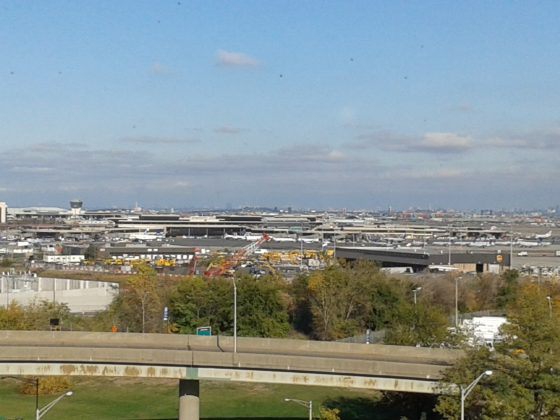 Over 30 million passengers pass through Newark Airport annually and is the major hub for United Airlines making it one of the busiest in the States. Its makeover has been a huge success and long overdue. 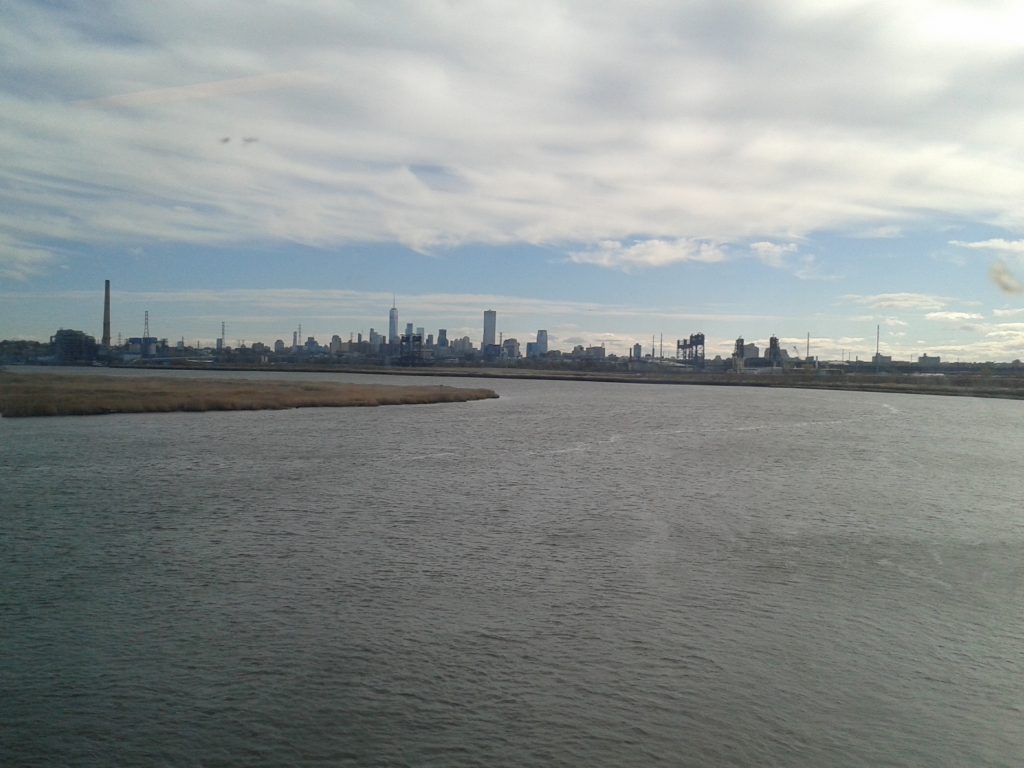 Located in New Jersey, Newark Airport is 16 miles from midtown Manhattan shown here in the distance. Thankfully this train service has alleviated some of the congestion heading into the Big Apple and has been operational now for a few years. The NJ Transit cost is USD $13.00 one way per adult and takes about 40 minutes either way and can be much quicker while being far more affordable. 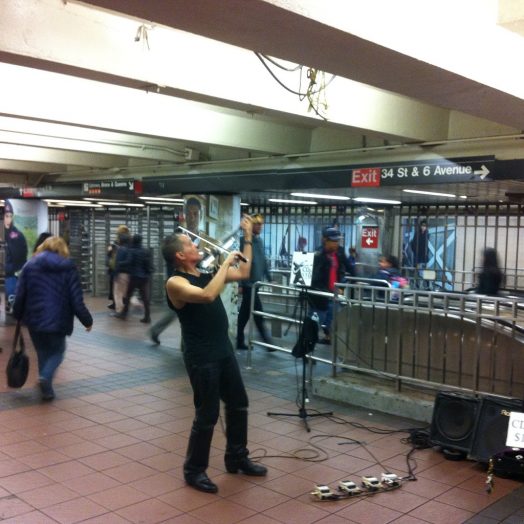 And sometimes you can be lucky while in the Subway to have the opportunity and watch a fantastic busker such as Lorenzo Laroc playing Led Zepplin’s Kashmir on an electric violin. 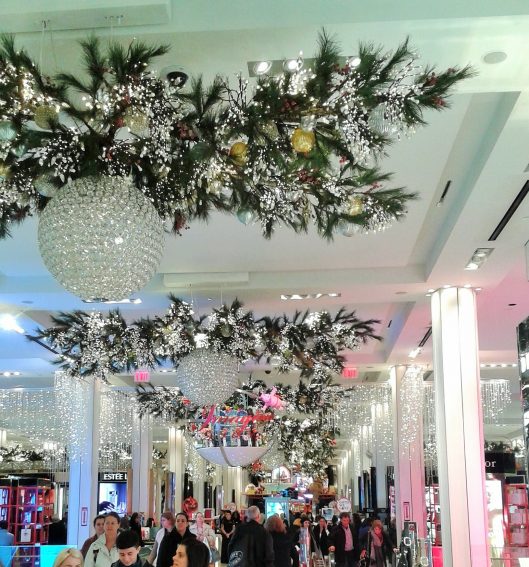 And not to mention of course, having a quick shop around with stores all lit up for the upcoming Christmas break and Happy Holidays. A real treat as they open late with eateries all around to choose from. 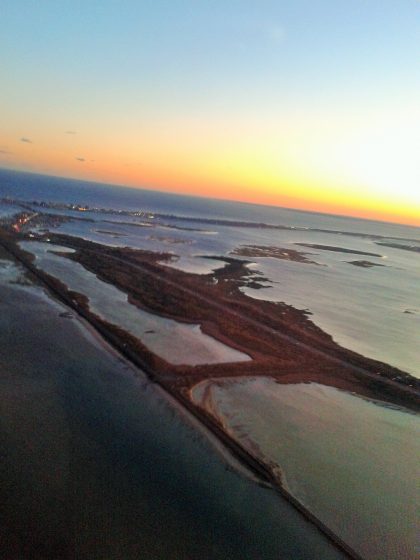 So long New York as I’m on my way to Toronto for another fabulous rail journey with Via Rail traversing Canada. Might be a bit cool but I’m expecting to see some snow this time! 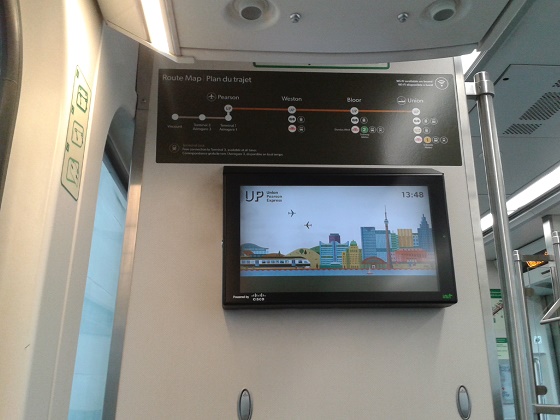 The UP Express from Toronto’s Pearson International Airport to Union Downtown Station is quick and efficient and a one-way ticket is about CAD $12.00 per adult. It’s fast, reliable and the trip only takes 25 minutes, with trains leaving every 15 minutes. 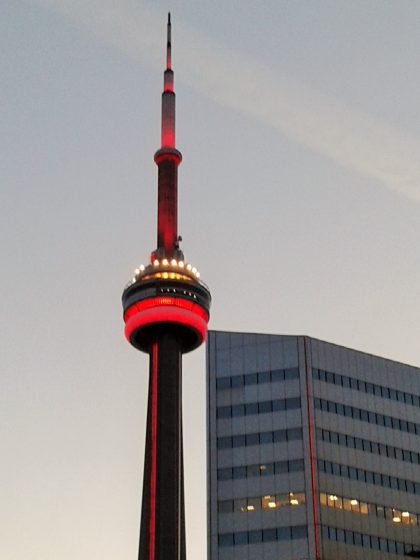 Great to see the CN Tower again displaying its colours and showing off as usual in Toronto as the major centrepiece within the city. 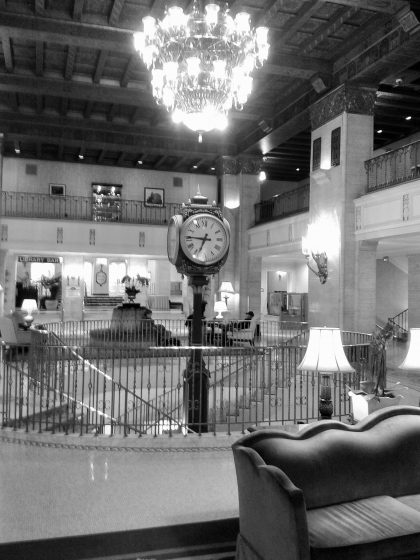 A stay at the Fairmont Royal York is the favoured hotel as it’s straight across the road from Union Station which makes it easier, especially if an early departure has been booked. 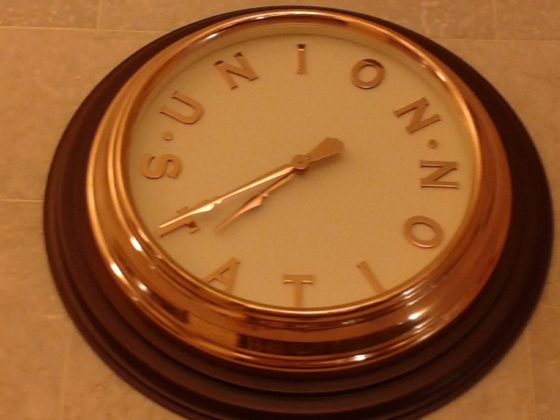 Anticipating the countdown for my departure on Via Rail’s The Canadian train crossing over the countryside for the next four days. Feeling very excited to be going from east to west this time and undoubtedly will expose a different aspect. What I may have missed out on a previous trip, I’ll most likely see now on a different schedule.

Stay tuned for my next blog – heading from Toronto onwards to Vancouver with The Canadian which is one of the most prized rail journeys in the world.