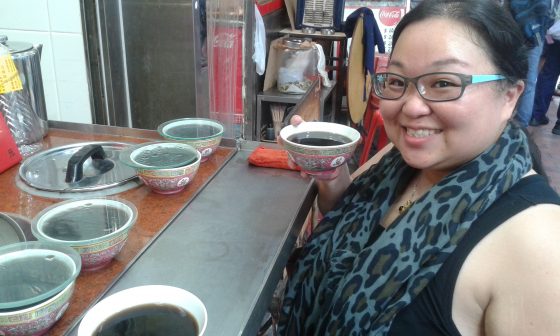 If there’s no other reason to visit Hong Kong than to hang out with friends, then you’ll always enjoy a Herbal Tea tradition dating back as far as anyone can remember – either made at home or being sold on the street in ancient days. Here with my mate Polly who is enjoying  a Dampness Expelling Tea and mine a Five Flowers Tea  for the princely sum of HKD10 each in Mong Kok.

In the 50s and 60s Hong Kong, there wasn’t too much influence from the West, beverages such as coffee and English tea was mainly served for high society with British Government officials and merchants in hotel coffee shops. The economy was blooming, people started to have more leisure, but there still wasn’t too many places for people to ‘hang out’. Herbal Tea Shops were the places which first installed TVs and radios, so it was similar to a chilling place for the youth at that time. Afterwards it started to be replaced by coffee shops starting from the 1980s. 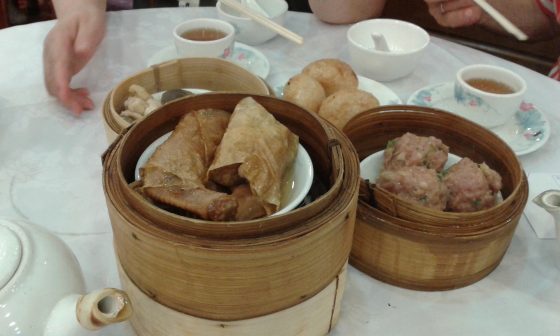 And, it’s even better when your friend Polly knows where to take you for Yum Cha! 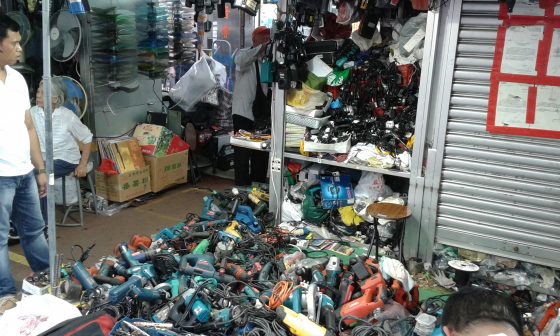 If you’ve seen Ladies and Flower Markets in Hong Kong,  a trip to Men’s Market might be of interest to the people who patiently tread the shopping mill with their partners; maybe sifting through and snatching an odd reward in Apilu Street will appease them. 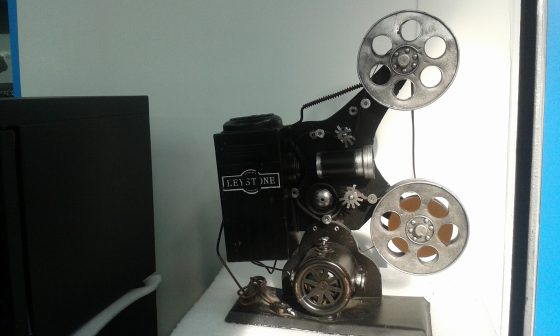 Some of the finds here are truly intriguing. Perhaps it’s one way of keeping your man (or lady) extremely happy and that’s not to say there’s some useful items to take home. Never know when you might fancy an antiquated movie projector because you’re tired of the remote-controlled TV at home? Nothing like a bit of nostalgia … 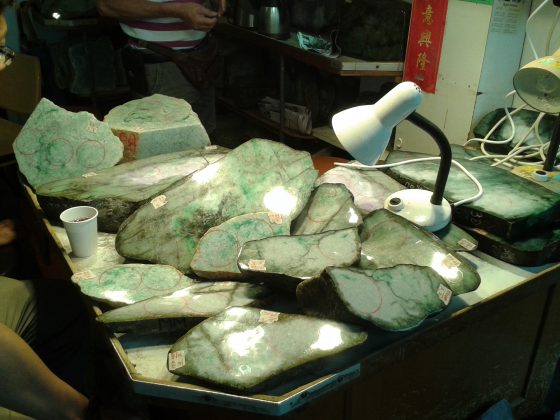 The Jade Market is the largest offering I’ve ever seen and if gems are your thing then take the MTR to Yau Ma Tei.  Exit C and walk south down Nathan Road and after passing under a road viaduct turn left into Kansu Street. The market is located near the junctions of Kansu Street and Battery Street (fourth on the left) almost opposite the attractive colonial Yau Ma Tei Police Station. You’ll find other interesting items as well … 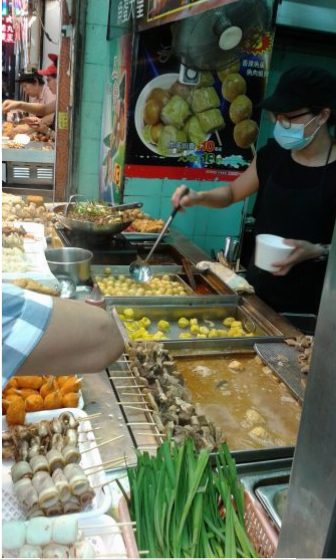 Lunch on the go is cheap and additionally there’s a plethora of small traditional restaurants serving authentic cuisine. 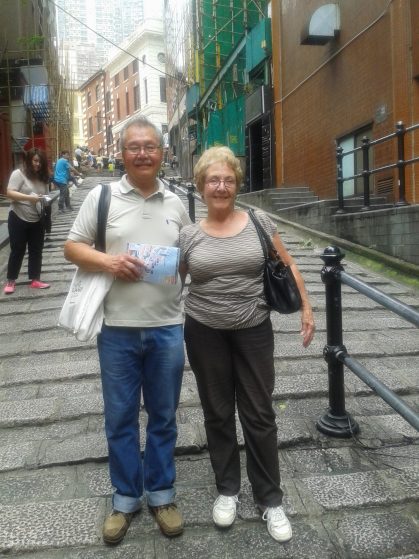 Later during my stay, it was time to catch up with friends Alex and Gwynne from Sydney who were visiting family in Hong Kong. Here at Ladder Street, we’re making our way up to Sheung Wan, which consists entirely of stone steps. 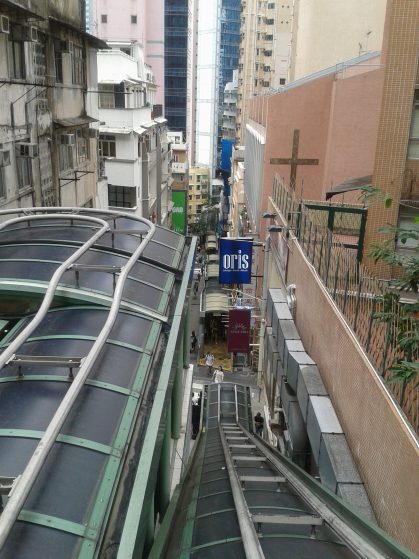 We also navigated our way up onto the Mid-Levels Escalator which crosses Hollywood Road and heads up towards Shelley Street. Although the people movers go on and on upwards, bear in mind, they do not operate coming down and the walk can be a little steep. But the good news is that you can stop along the way at a myriad of bars and restaurants; and if it’s later in the day, perhaps stop for a couple of cocktails within ‘happy hour’ to ease the burden of a long walk downwards – you won’t even notice how far you’ve traipsed after some bevvies … Check out Lan Kwai Fong for a lively smart area to chill out. 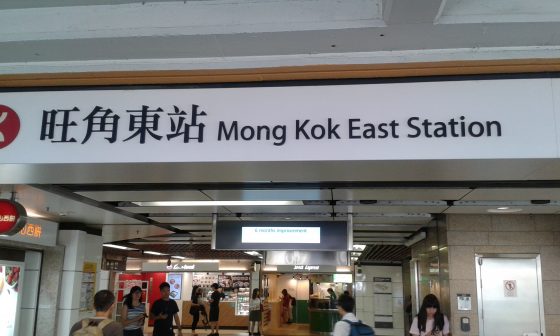 So, I’m heading off next to Shenzhen in China which borders with Hong Kong and easiest for me whilst staying here is to take a train across. Takes about an hour from Mong Kok East Station and the cost one way for an adult is HKD40 in economy and HKD80 in First Class which has its own dedicated queue to board. On today’s exchange rate A$1.00 = HKD6.21 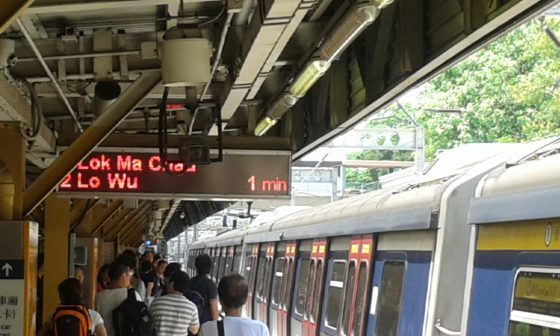 On the Hong Kong side of the border is Lo Wu station and Luohu Station at Shenzhen, China with  a number of stops en route. However, a new faster express train is currently being developed for the near future and will take approximately 17 minutes I’ve been advised. 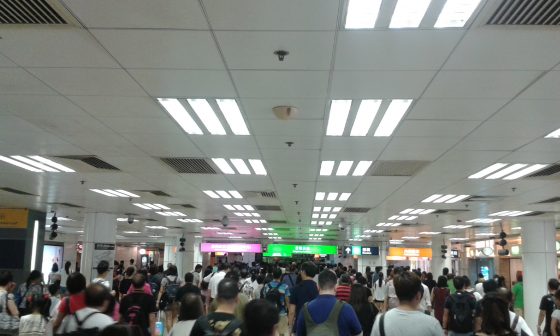 Australians require a visa to enter China and if seeking a 72 hour visa-free stay, then check with the Chinese Visa Application Service Centre for updated information. You can go online and make an appointment prior to going into the Centre to speed up the process.
Address: Level 5/299 Elizabeth St, Sydney NSW 2000
Phone: (02) 9475 8800
Hours: Open Monday to Friday 9am–3pm

At Luohu Shenzhen, there’s an underground subway which is also a major rail station and the border crossing immigration point is here – all in the one place. It’s a mix of old and new buildings and though the signs can be a little vague, eventually you’ll find your way out … You can fill in the arrival form found on the counters before progressing to the Immigration line up. 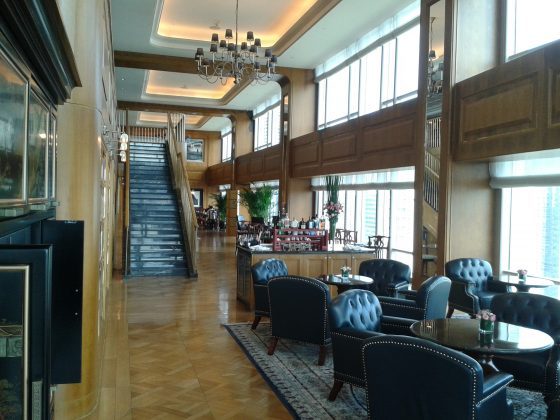 Checking into The Langham Hotel in Shenzhen had been made a breeze at the Club Lounge which is  inclusive of internet access and VIP welcome amenities. My advice is to upgrade and treat yourselves to take advantage of the Club privileges which include daily breakfast for two, afternoon tea, evening cocktails with canapés and additionally all-day coffee/tea with light snacks. 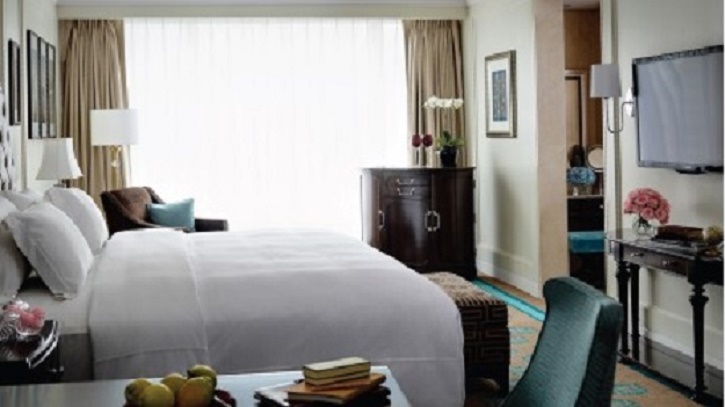 Rooms are beautifully appointed with natural light streaming into the room and it’s just what Aussies love – bright, stylish rooms. Classic European style in the heart of modern Shenzhen – you may not want to leave the hotel once settled in! 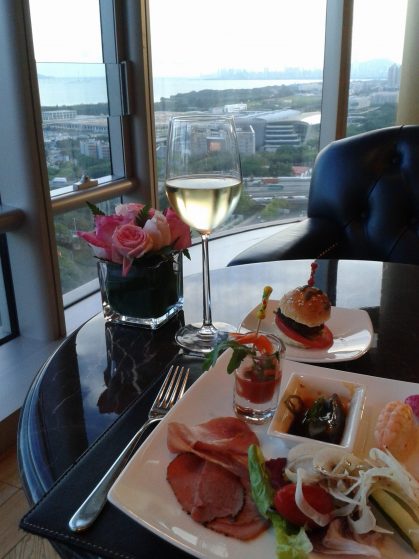 And at the end of the day, why wouldn’t you want to relax and soak up the classy atmosphere at The Langham …

Somewhere out there on the left is Hong Kong and it’s easy to see why the residents come in droves for a short break away when you can experience luxury at an affordable price in an elegant five-star hotel such as this one. 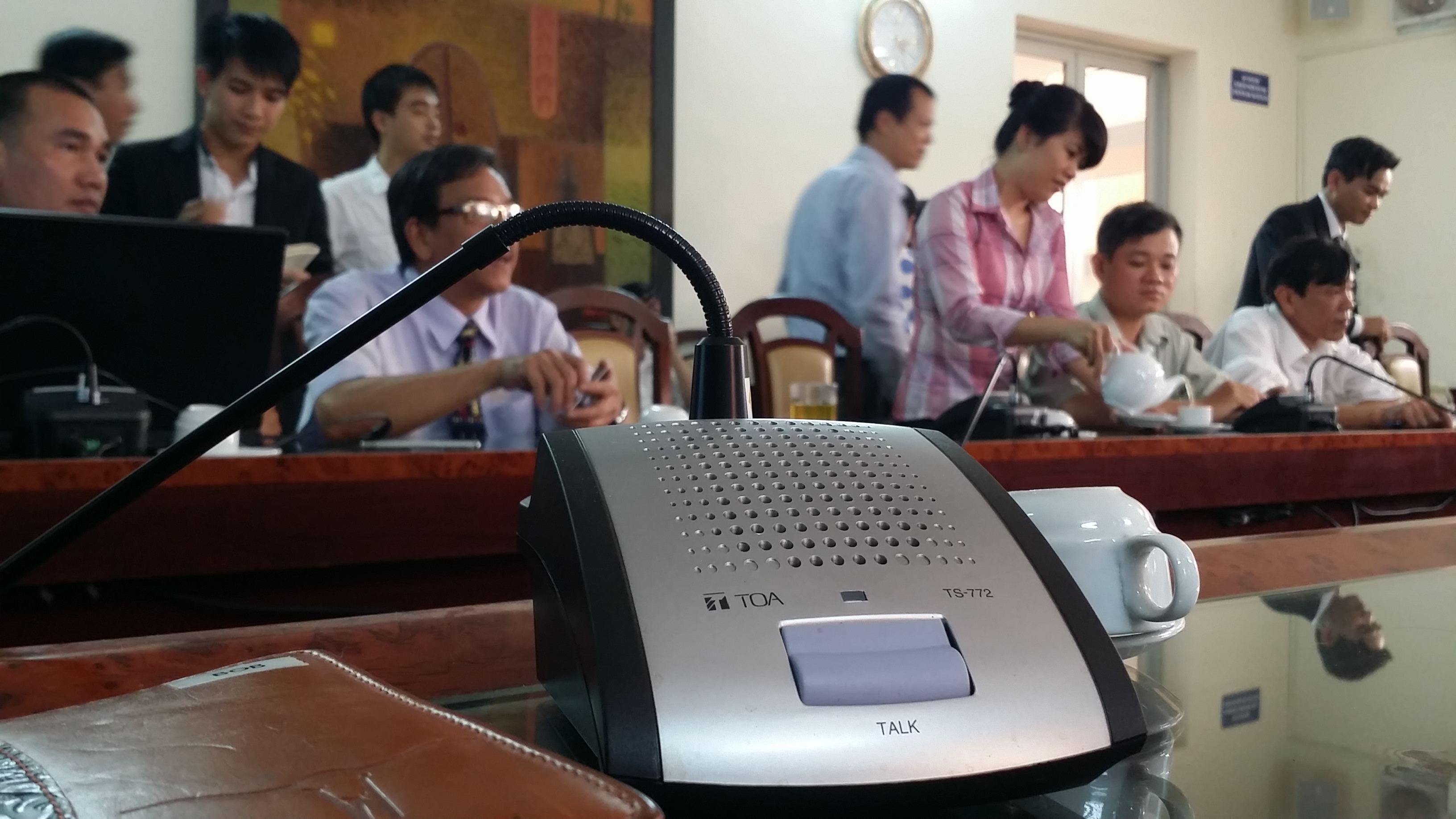 Time for questions and answers with Hue Tourism and the media. Interesting to note, Australians came in third place for visitor numbers to Vietnam. 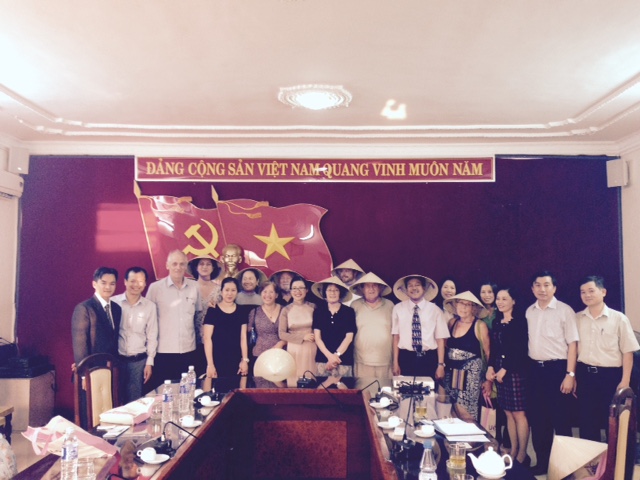 A big ‘thank you’ to Hue and Central Vietnam for hosting and showing us all the delights this region has to offer. 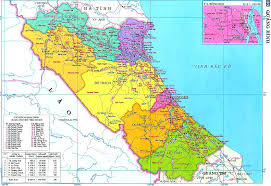 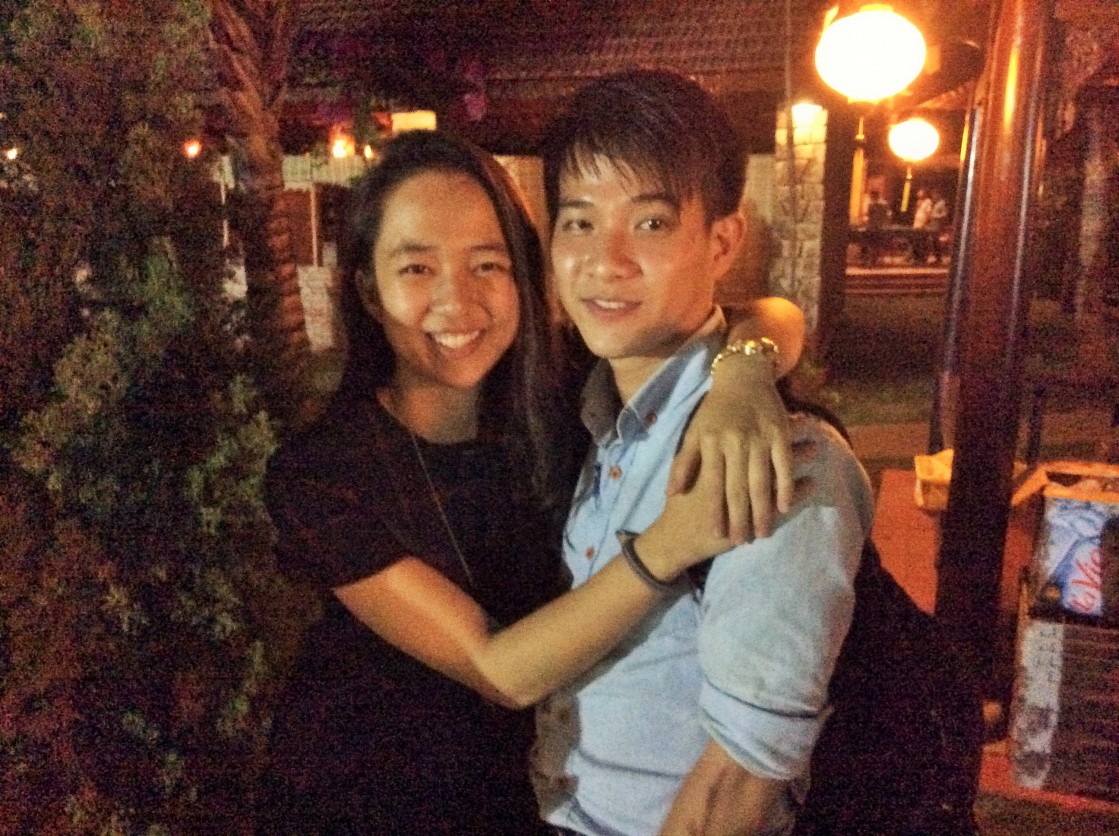 Farewell to our lovely sales representative at Tam Giang Resort and Spa – here with Ty. 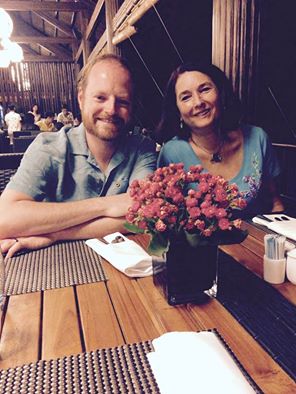 Big farewell to Bob and Mary from Colorado, USA. 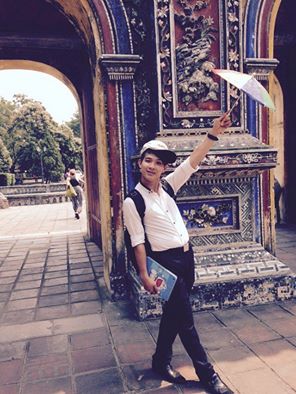 Yes all good things come to an end, and it’s time to bid goodbye Ty our tireless guide all throughout the journey. 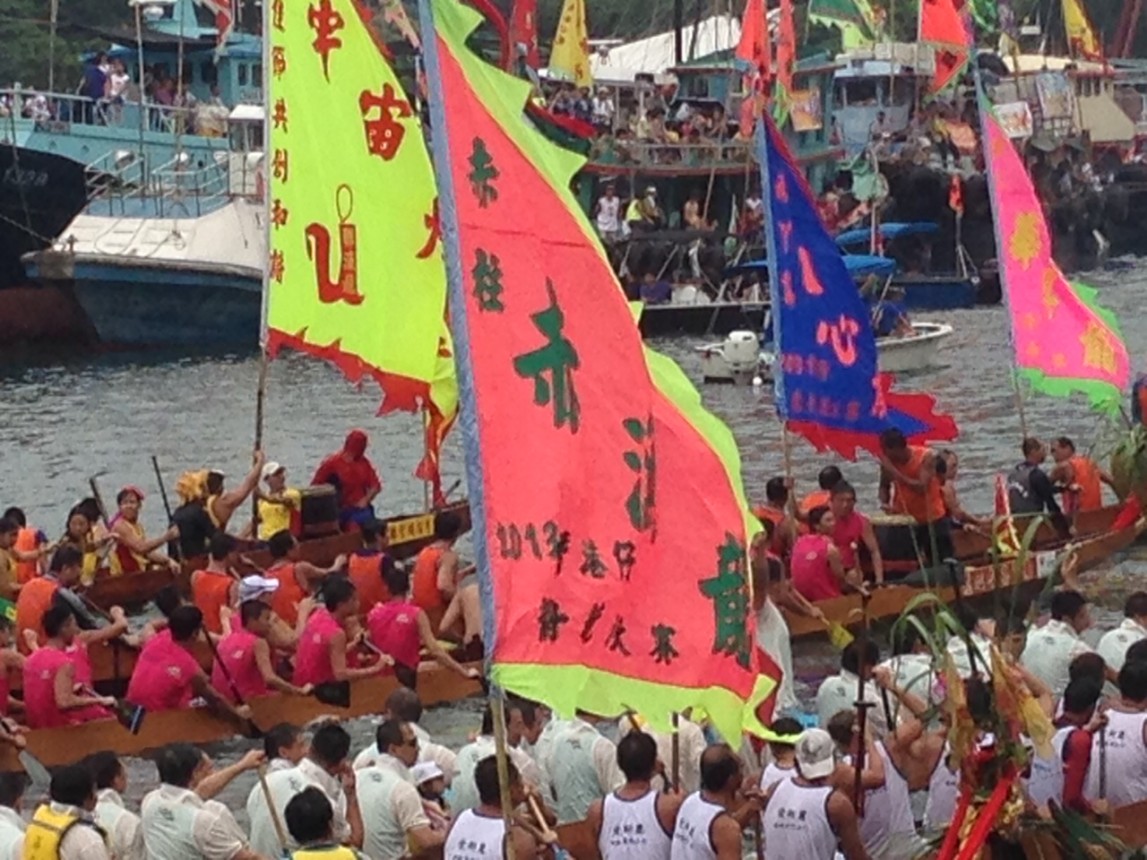 There’s numerous reasons to do a stop over in Hong Kong, here watching Dragon Boat racing. 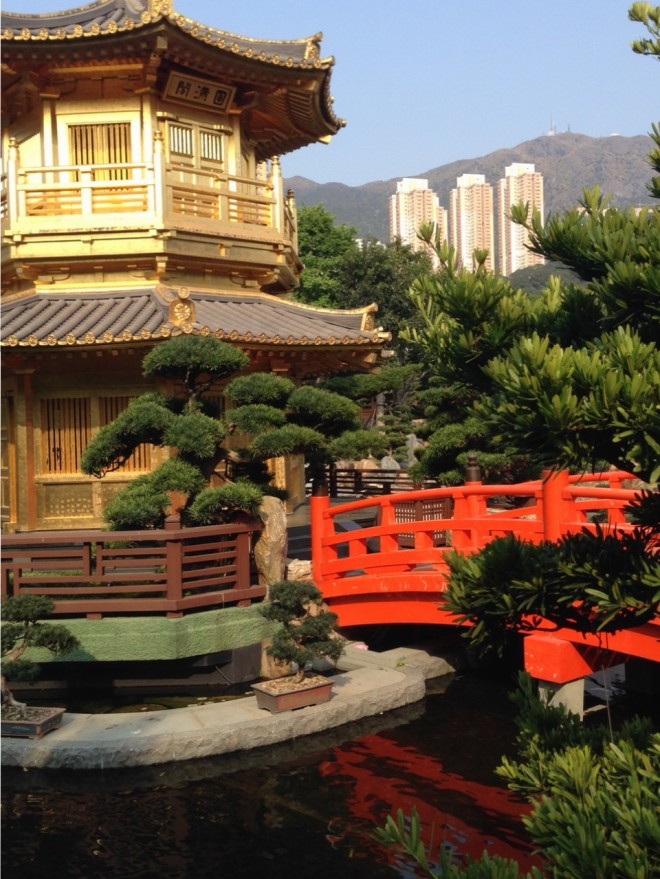 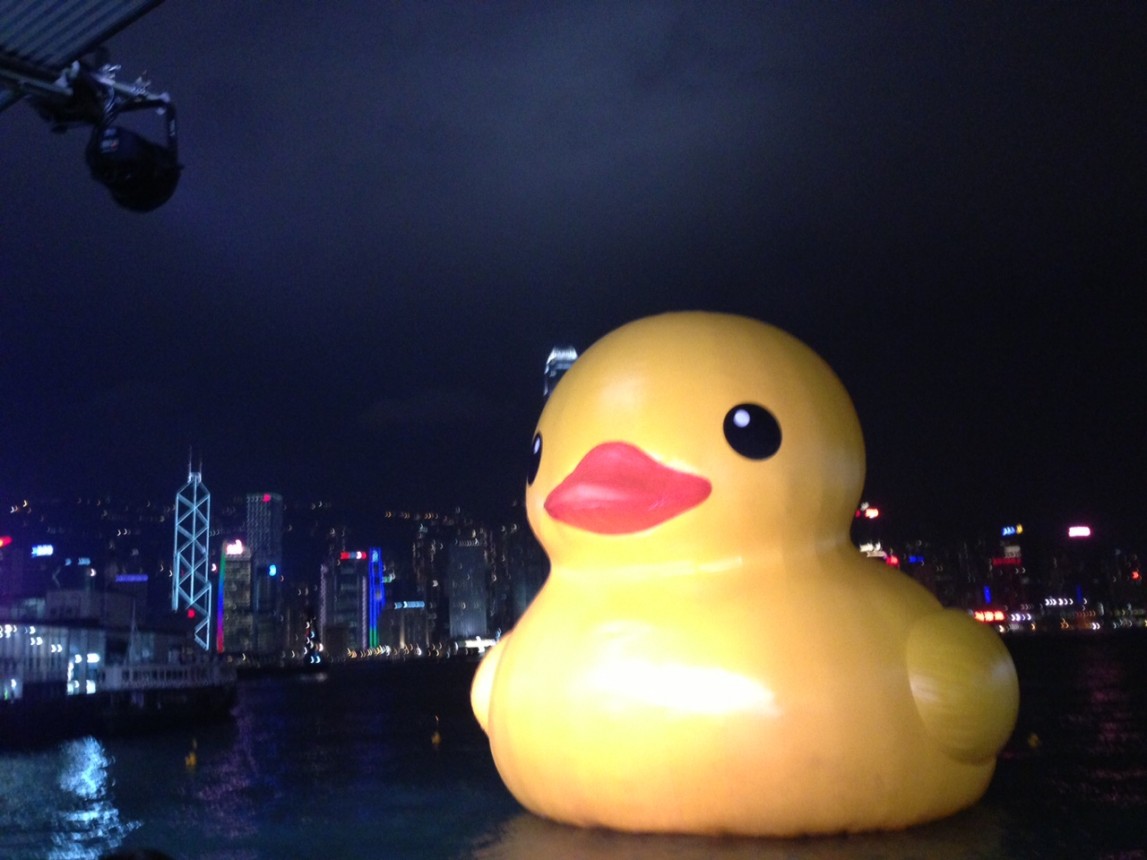 Hong Kong’s also known for its love of art installation and Rubber Duck which was one of several giant floating sculptures designed by Dutch artist Florentijn Hofman. 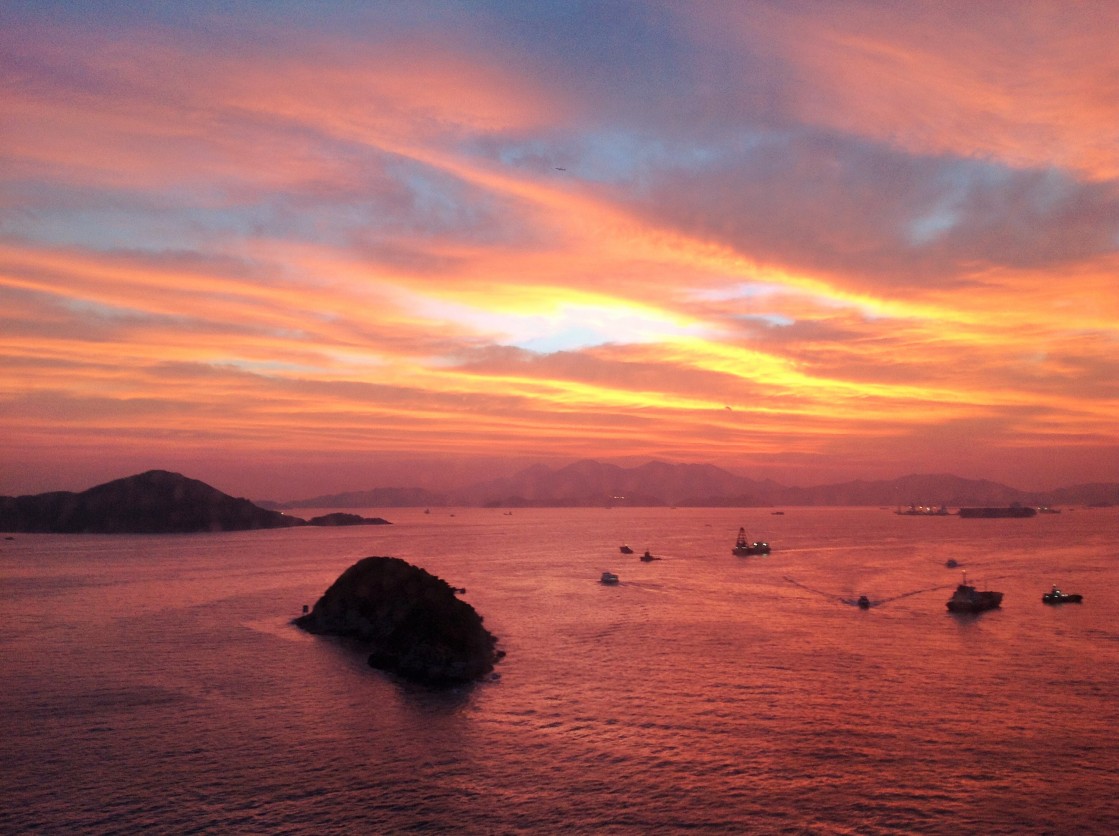 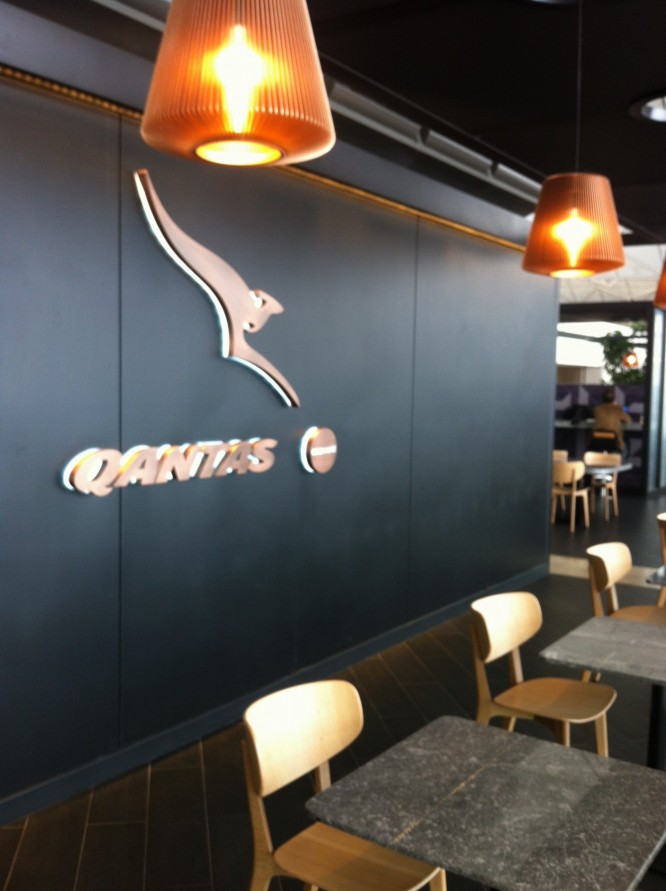 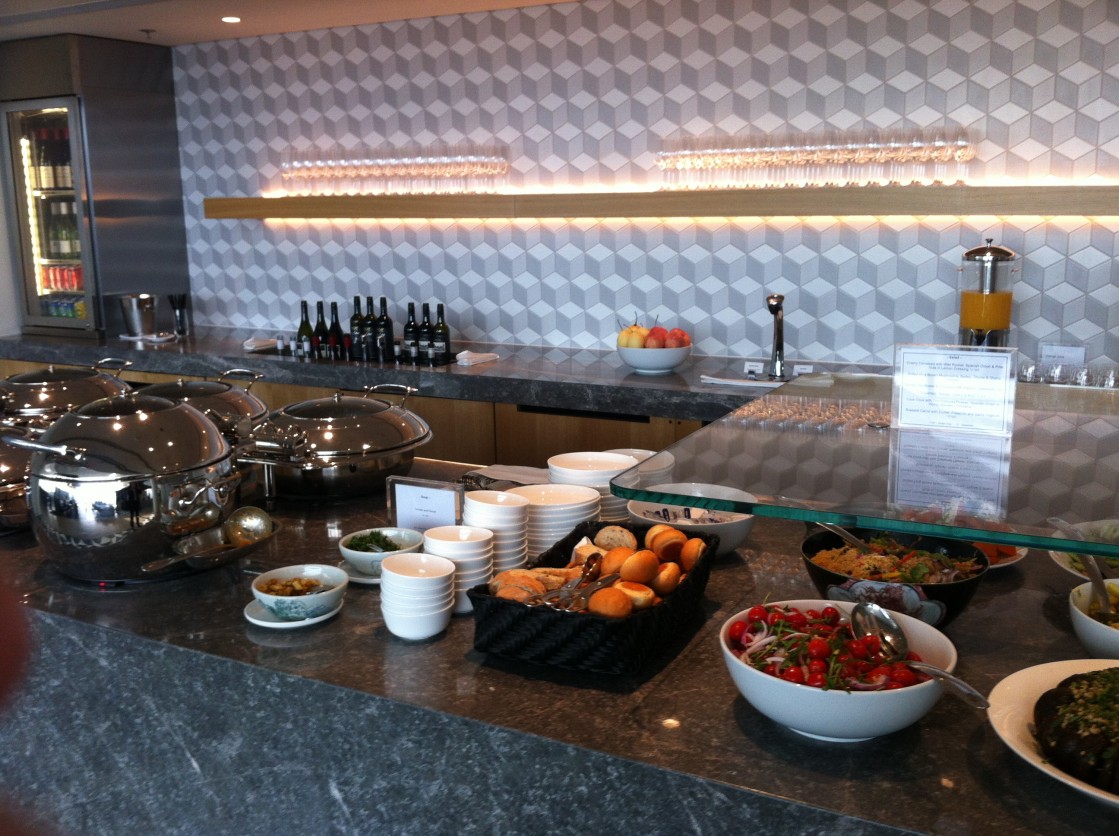 And for the Qantas Singapore Lounge, just look at the cuisine! I don’t believe you’d find a better Business Class lounge anywhere else … 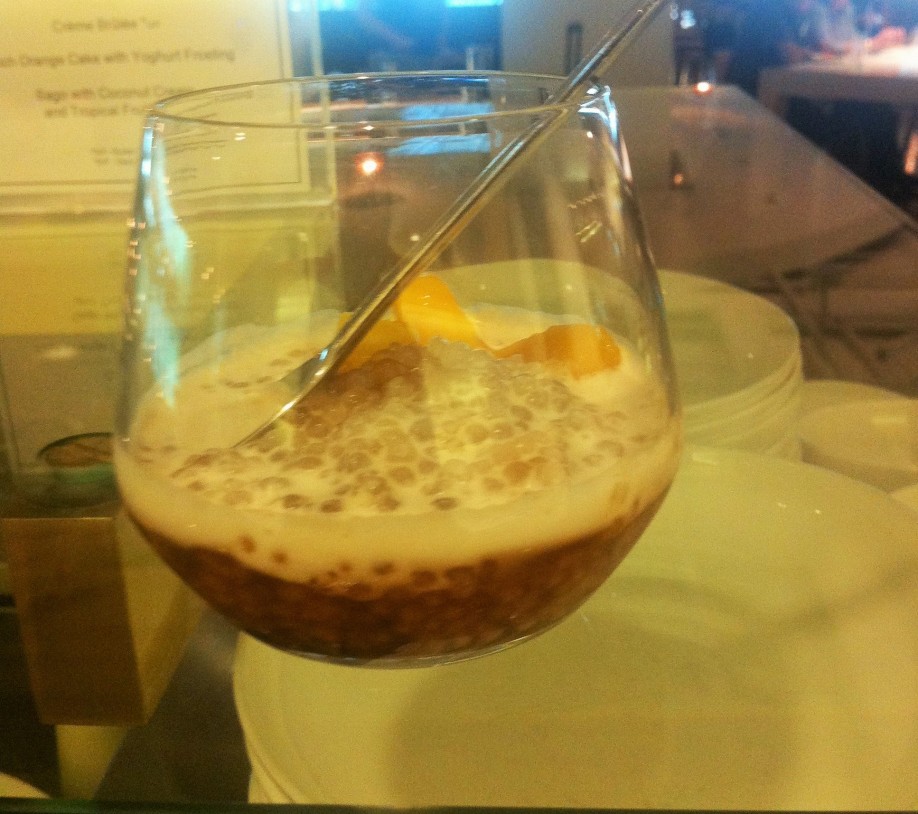 For those I was telling you about sago, this is what it looks like and made to perfection. Yum! 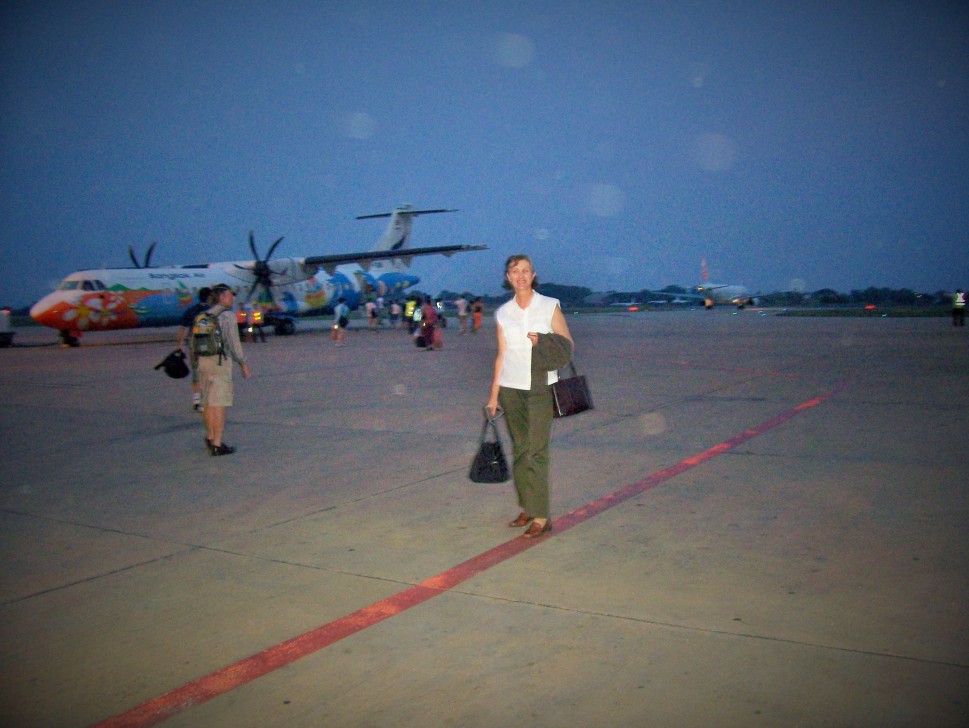 As for me, I’m heading in all directions soon, however this has been a fabulous trip and sorry to see it’s over.

I always say with international airfares there’s usually excellent alternatives to travelling directly (or point to point) to your final destination. On this journey I had a stopover in both Hong Kong and Singapore and it’s possible to do as a round trip using Qantas Airways for the long-haul sectors. With affiliated carriers, travel was included between these two cities. Various airlines have interline agreements and you can pack much more into your trip if you so desire.