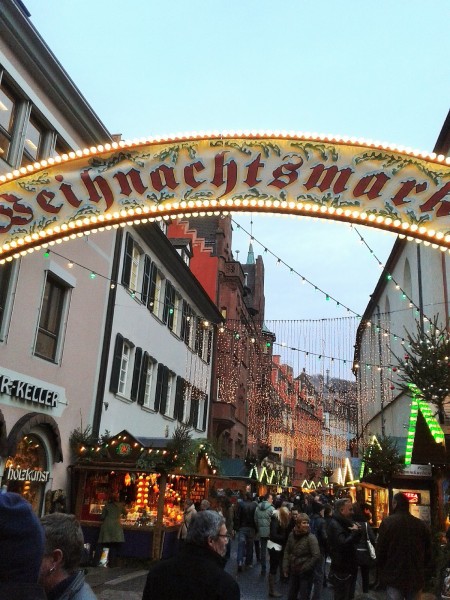 Christmas Markets in Freiburg, Germany and anyone thinking of visiting Europe later in the year would have to stay for the festivities, especially in Germany where it’s almost a cult. 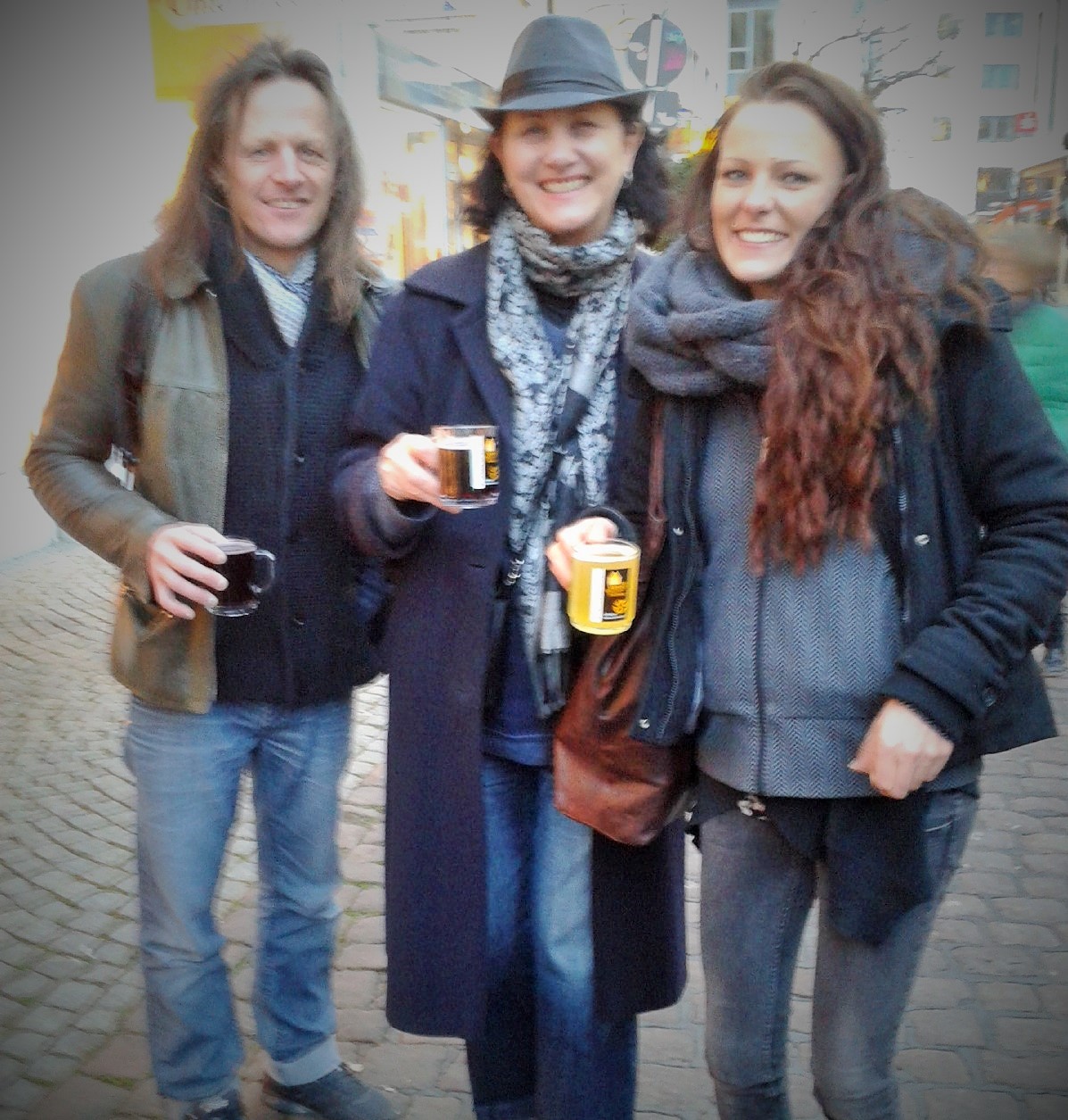 Hanging out at the Market with my gorgeous young cousin and her special man Tomasi who is a world-class Tattooist. One day I will have my own special little tattoo – just like actress Dame Helen Mirren decided it was time, I too will do so, but I need some more gluhwein! Maybe yext year … 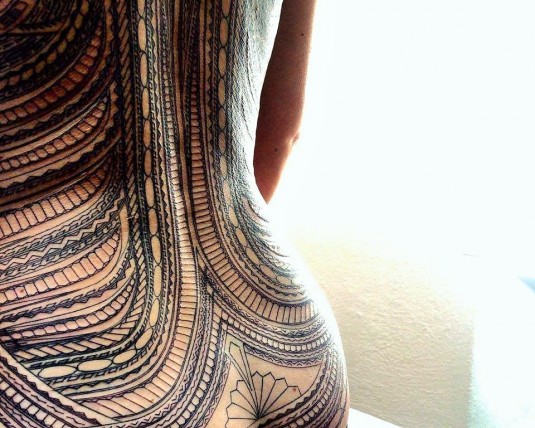 I wish I could say this is my backside, but obviously not. However, I do have admiration for work which is innately tribal and represents a desire to be an individual artistically.

Seeing Tomasi Suluape Tatau Samoa’s work today at his studio, he’s the only official Sua trained Sulu’ape tatau artist based in Europe, keeping the traditions and the family name alive through his tattooing. Each piece, whether machine or traditional is a completely unique customised work of art with an unmistakable style. 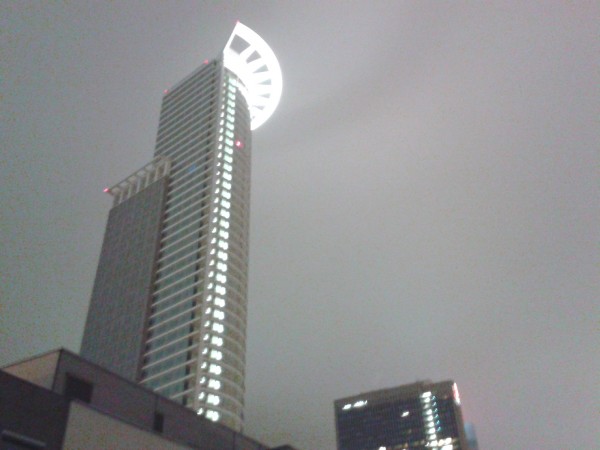 Onwards to Frankfurt to travel home, one of the most recognisable buildings in the city and a favourite.  Westendstraße 1 is a 53-storey, 208 m skyscraper in the Westend-Süd and close to my hotel, you can always spot it coming into the Hauptbanhof (main train station) and for me it means either arriving in Europe or departing …  Almost time to head home to Australia. 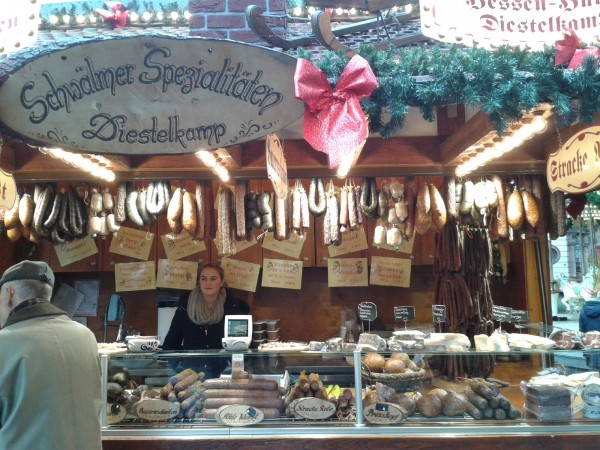 However, there’s always time to grab a bite to eat and enjoy the atmosphere before heading off to the airport for the arduous trip. 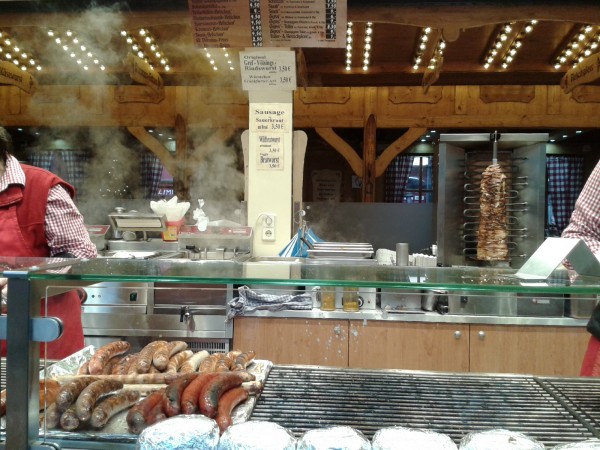 Bratwurst – yum! Today who cares? I’ll have two thanks. 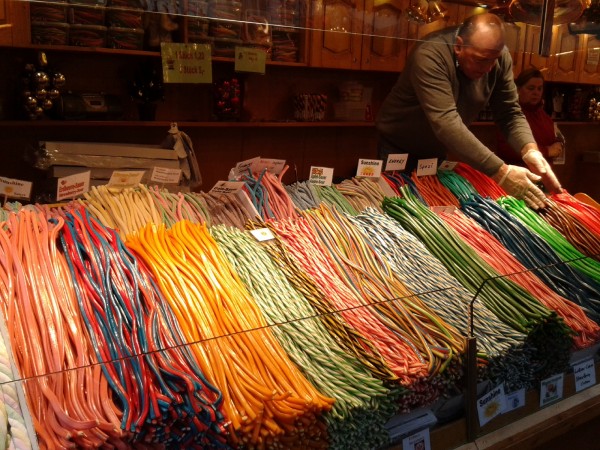 Liquorice stall at the markets – so much colour and beautifully presented. 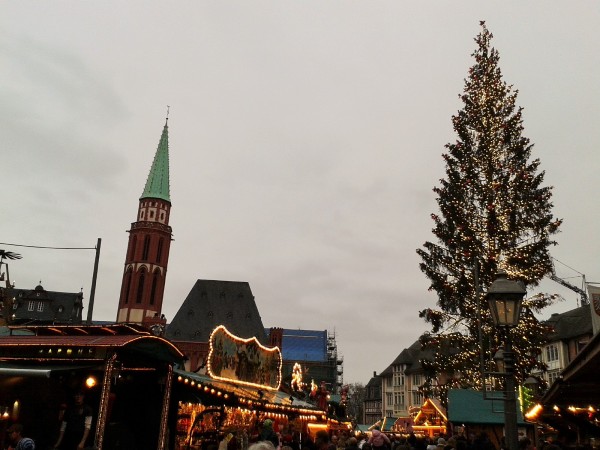 Frankfurt Christmas Markets are crowded and they’re always open till late in the evening. 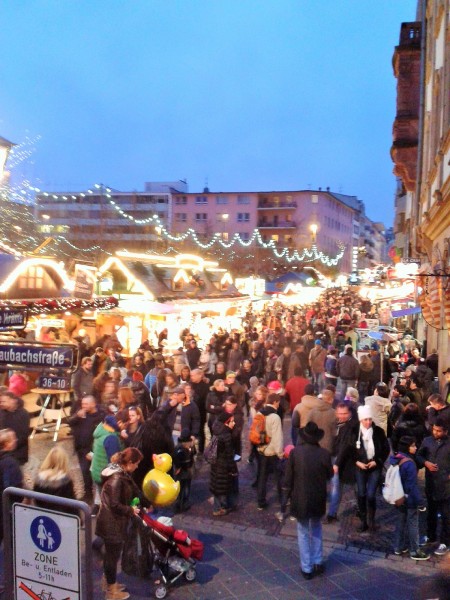 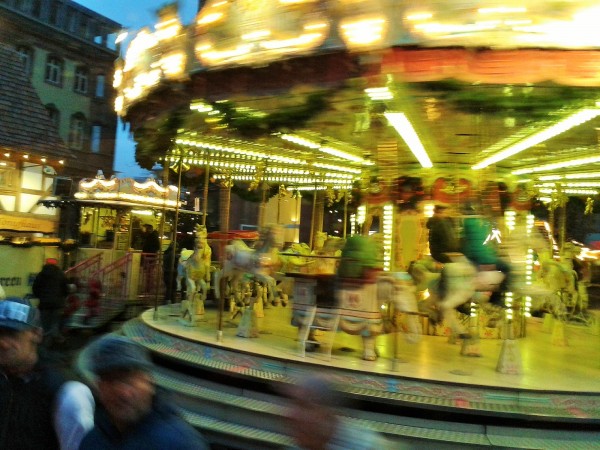 Everyone including families being able to enjoy the amusements. 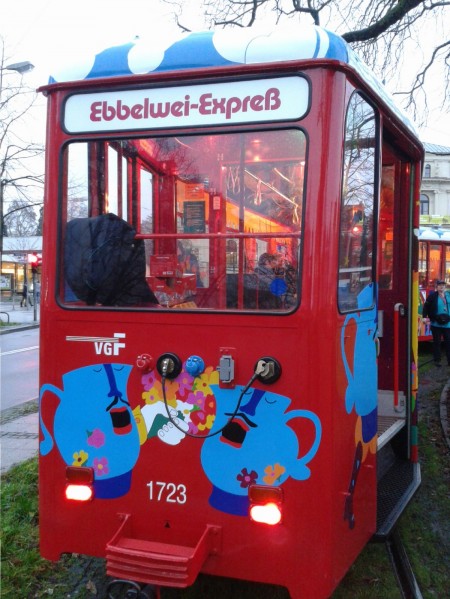 Ebbelwei-Express stop can be found directly to the southern end of the main Hauptbanhof.

The fun costs €8.00 for adults and €3.50 for children and teenagers up to the age of 14 and includes an audio tour lasting one hour. Not only will you enjoy an extraordinary journey, the ticket price also includes your choice of a bottle of cider, apple juice or mineral water and a bag of pretzels. Other beverages can be bought additionally. 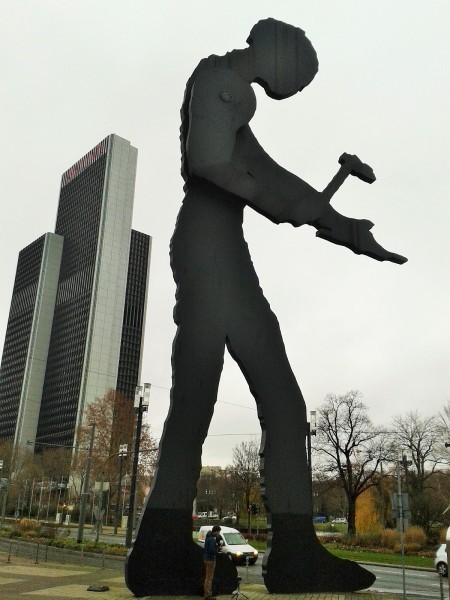 Hammering Man is a series of monumental kinetic sculptures designed by Jonathan Borofsky which have been installed in various cities around the world and this one being in Frankfurt is unmistakable. 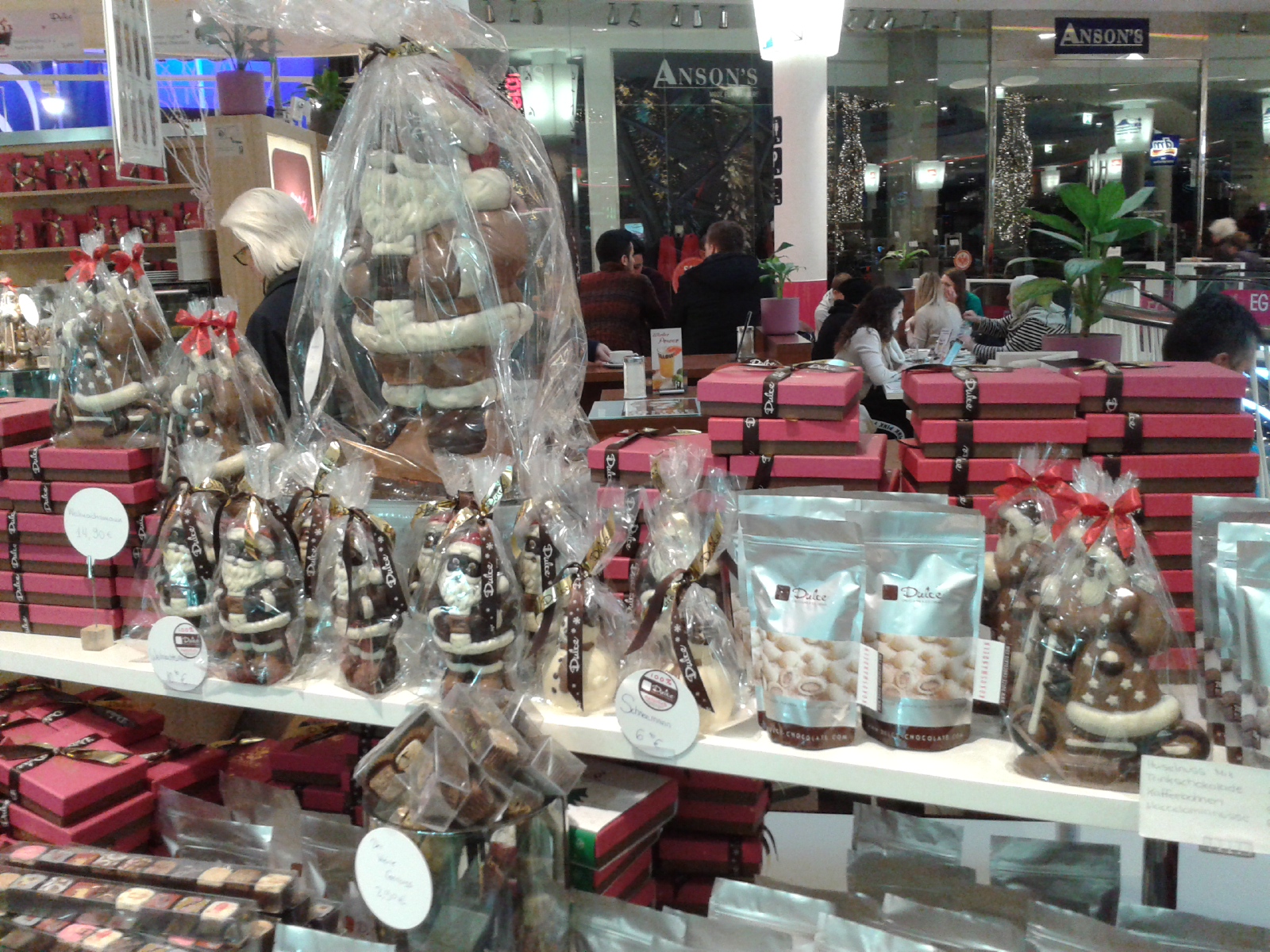 Shopping in Germany is such a pleasure with so many delicacies and treats on offer. 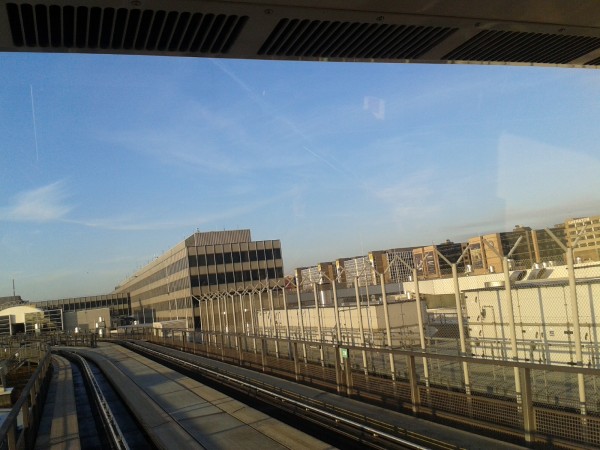 Heading home on the unmanned train between the two terminals is quick and easy, just check your electronic ticket if your airline is departing from Terminal 1 or 2 as Frankfurt Airport is one of the busiest in Europe. 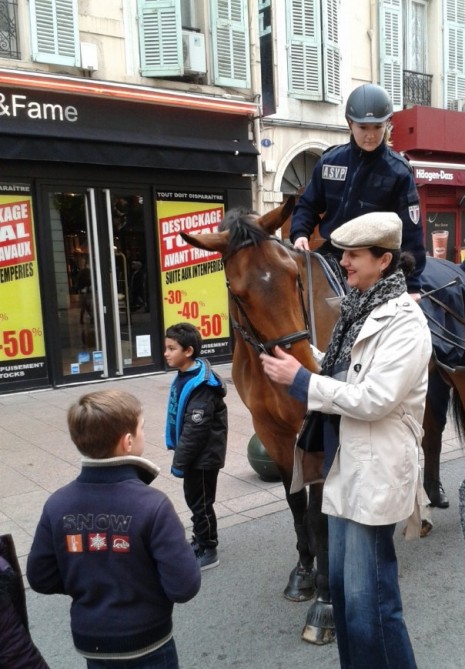 Well it’s bye for this European trip, but I’ll be back …