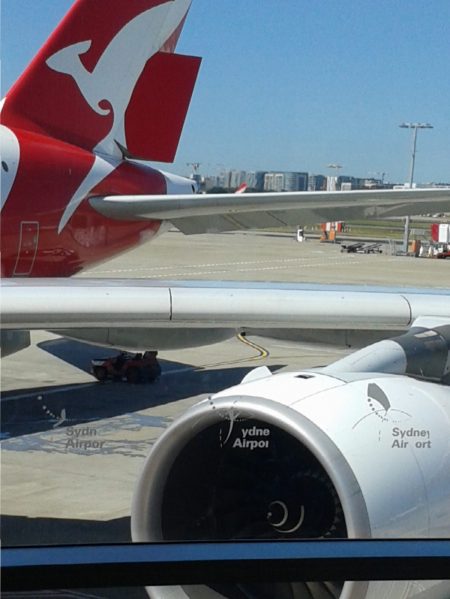 If you’re heading to Dallas and Fort Worth’s International Airport (DFW) in the United States, then you’ll know it’s one of the longest flights in the world from Sydney with Qantas Airways travelling 13,804.95 kilometres. And after 15 or so hours flying time, the staff onboard my flight, namely Matthew and Kiet who looked after my section couldn’t have been more helpful. Fresh and still able to share a joke at the end of the journey. The A380 was always kept immaculate and with touch on-demand inflight entertainment from the moment you step onboard the aircraft until arrival – the time just seemed to fly. 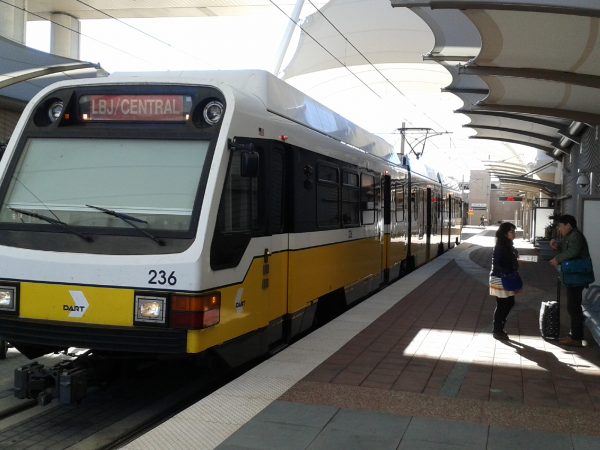 Things have changed considerably since my last visit to Dallas – and for the better. A train service now operates from the airport to downtown Dallas. The cost? A whopping $2.50 one way per adult and valid for two hours. Make sure you have some US dollars before arrival as the machines are located in the train terminal and platforms.

DFW is one of the best airports to arrive as they now offer passport control very much like here at home (in Australia), whereby you scan your document and have finger prints taken all in a matter of minutes. No long queues as previous trips to the States. For Australians – make sure you’ve completed your ESTA online form before departing – see link for applications  https://esta.cbp.dhs.gov

See https://www.dart.org/riding/dartrailorangeline.asp for more information as this is one of the quickest and easiest ways for ground transport as the rail line will slice straight through to the main parts of the city.

(Information given here was correct at the time this blog was posted.) 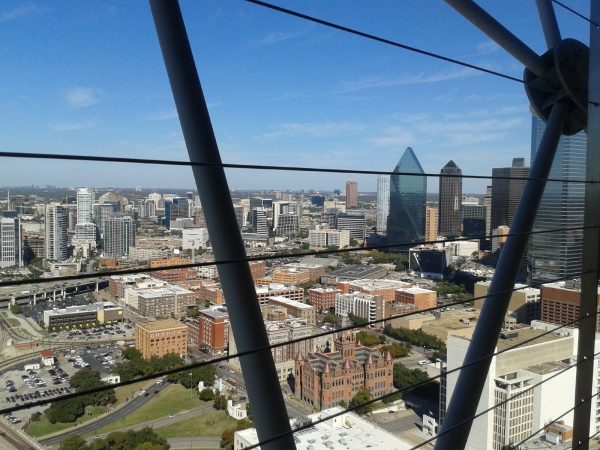 From this angle I can see Fountain Place located at 1445 Ross Avenue in the Arts District which is a 60-story modern-styled skyscraper which was used in the last seasons of the TV series Dallas. If you were anything like me, you were glued to the TV screen wondering what JR Ewing was up to next. 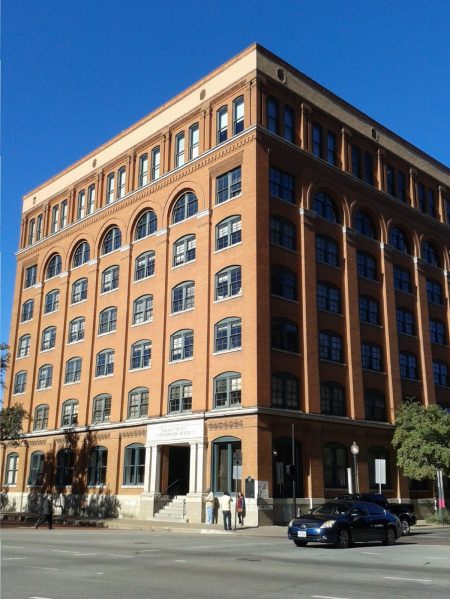 Equally impressive is the Sixth Floor Museum at Dealey Plaza which is a timeline of John F. Kennedy’s life and presidency. The exhibits are thoughtful, respectful and reflective of the events of what happened on this day 22 November, 1963. 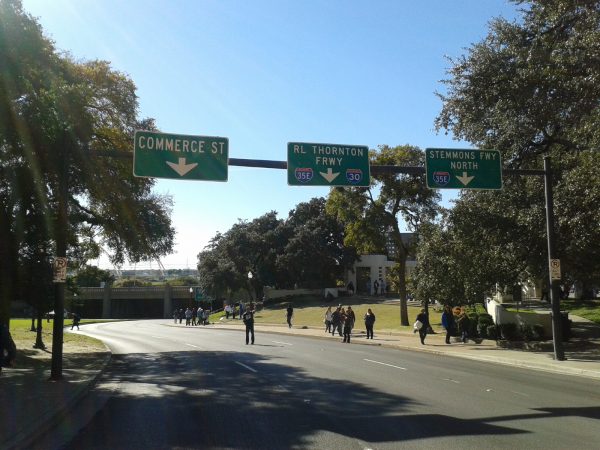 The road where President Kennedy was shot more than 53 years ago when this photo was taken. It shows even after all this time, people are still curious about the assassination and the circumstances surrounding his death. It seems people still have their own theories as to what really triggered the calculated slaying. 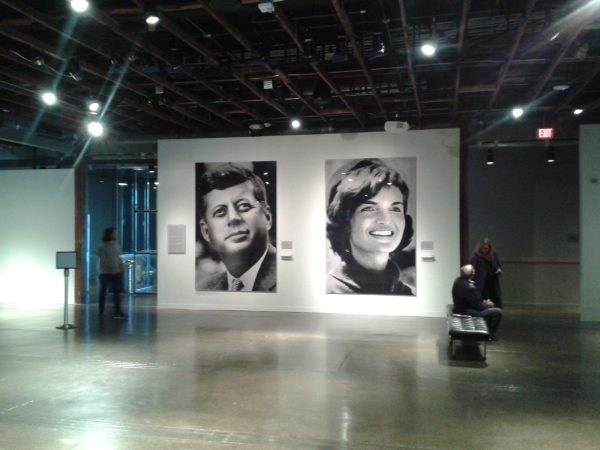 Jacquie and John F. Kennedy will always be remembered and as this museum is a dedication, it’s one of the most visited in Dallas. It’s also part of the CityPASS which allows you easy access and discounted admission to many of the popular attractions, which incidentally are mostly within walking distance to each other. By buying it ahead of time allows you to skip the ticket line and gain entry to the crowd pleasers of which most are within walking distance to each other. 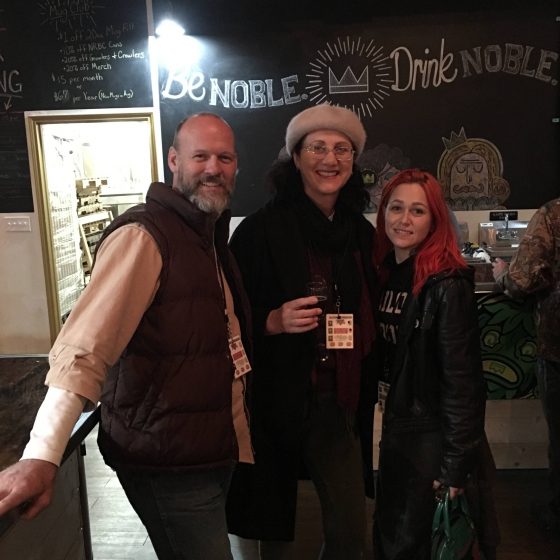 I’m here with Jeb and Jamie from Efrogs recommending a choice of crafted beers from one of the tour’s breweries. Starting at $70.00 The Brewery Tour is a fun way of making new friends and not having to worry about driving as it’s all taken care of.

Efrogs which is an acronym for Eco-Friendly Rides on Green Shuttles and is a tip-based transport service, also providing free rides for office workers, hotel guests, restaurant and bar patrons, as well as visitors at parties and sporting events. 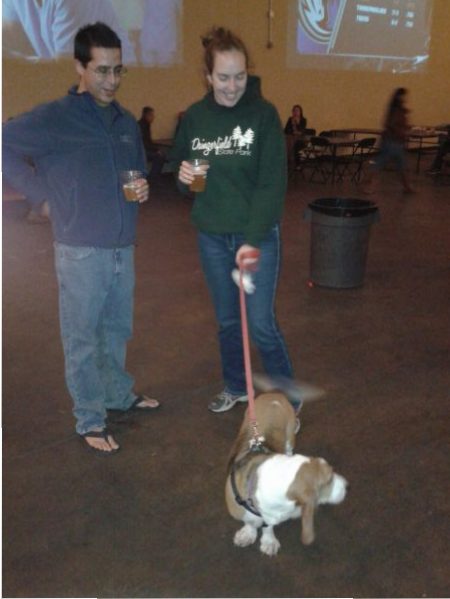 At the Community Beer Company during our tour, I had to ask the old pick-up line. “Do you and your dog come here often?” Owners from around the neighbourhood and afar come here with their pooches to socialise and listen to some good music. Dogs are permitted due to no food being served on the premises. 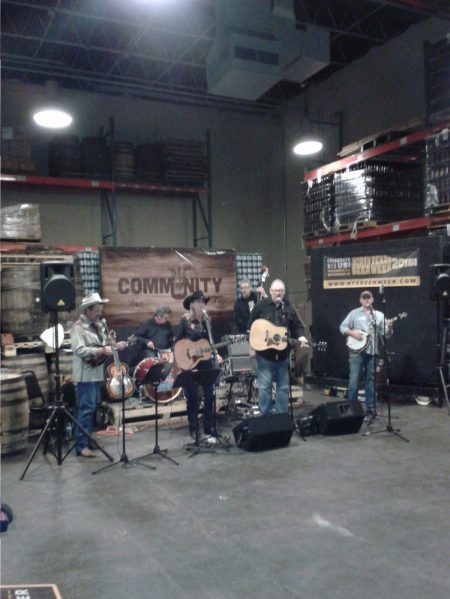 Band at the Community Beer Company giving us a few tunes to either dance along, or there were a number of other activities you could partake in.
http://efrogsdallas.net 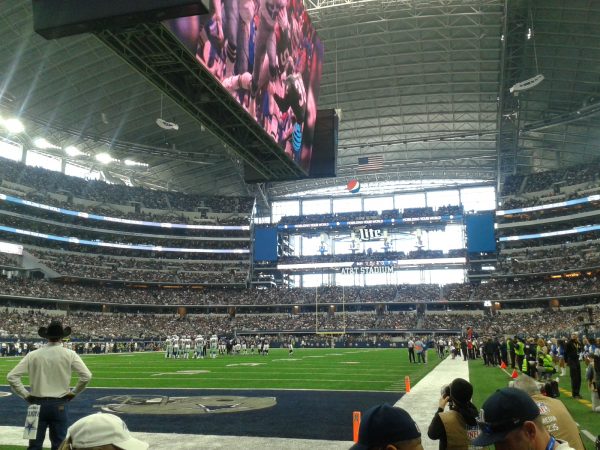 At AT&T Stadium Dallas Cowboys in full flight against Baltimore Ravens makes it a super charged game and the crowd was electric. There are various tours available ranging from VIP, Self-Guided, Art and Educational which can be booked through http://attstadium.com/tours and definitely worthy of a visit even if there’s no game on during the week. 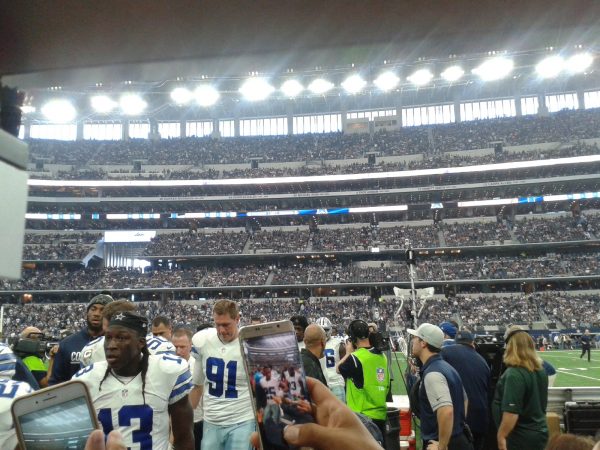 Dallas Cowboys are world renown as a football team and even if you don’t follow footy of any code, you won’t want to miss going to a game just for the atmosphere. 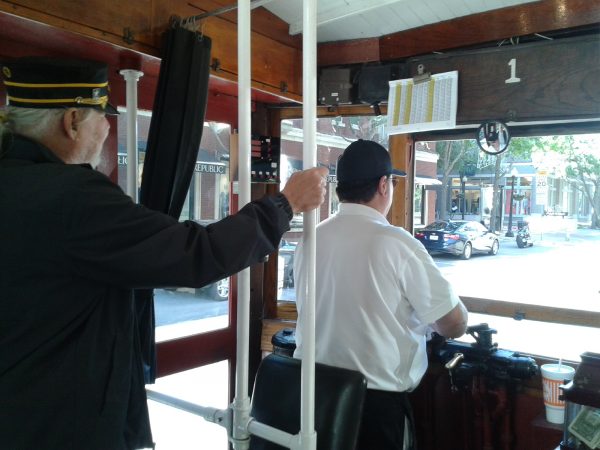 Free trolley ride anyone? Everyone loves this especially the young ones as it trundles from downtown to uptown with a number of stops along the way. 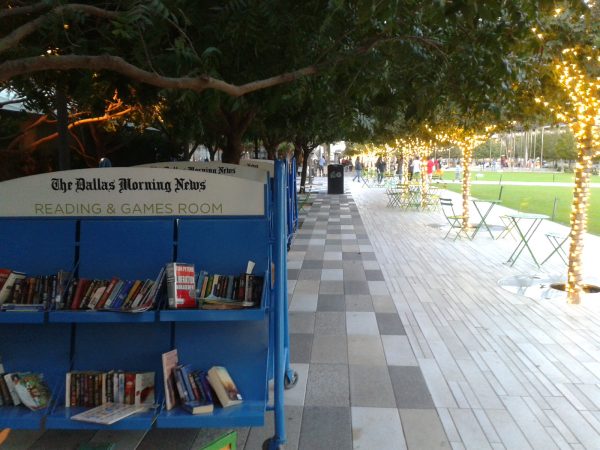 And the delightful Klyde Warren Park is one of the stops and central to everything. A wonderful open space which was built over the top of the freeway. 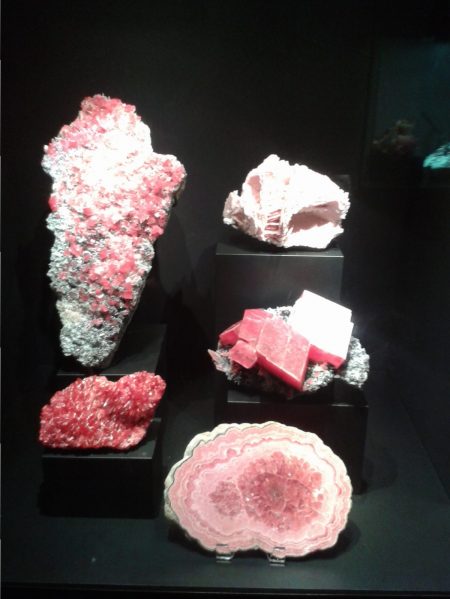 The Perot Museum of Nature and Science (allows entry with a CityPASS) and is home to one of the most impressive gem collections in the United States. A new dinosaur species just recently discovered can only be viewed here. 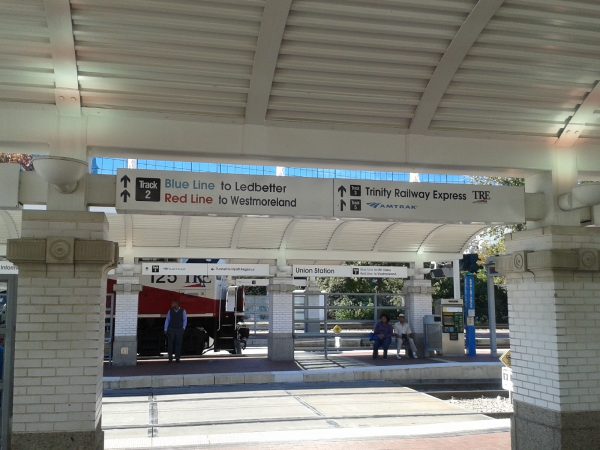 The Trinity Rail Express (TRE) operates between Dallas and Fort Worth with each city having its own unique attractions and events making it easily accessible. The TRE is provided by the Fort Worth Transportation Authority (The T) and Dallas Area Rapid Transit (DART). Trains operate Monday through Saturday with no scheduled service on Sunday. Fares are US10.00 per adult one way see http://www.trinityrailwayexpress.org for timetables and updates. 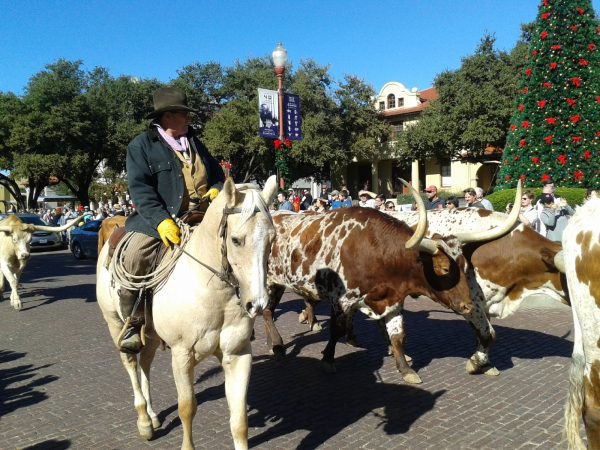 The Stockyards at Fort Worth are a must see especially if you have children who love the idea of being in the Old West. The Cattle Drive as shown here happens daily (weather permitting) at 11:30 am and again at 4:00 pm. 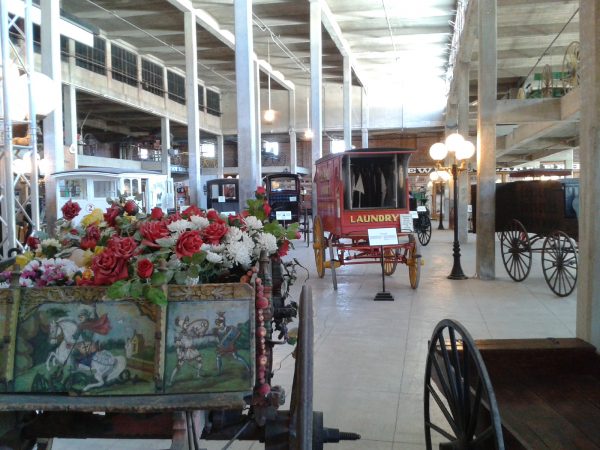 The Museum at The Stockyards showcases some of the best-preserved and restored wagons, buggies and farming methods of this era. 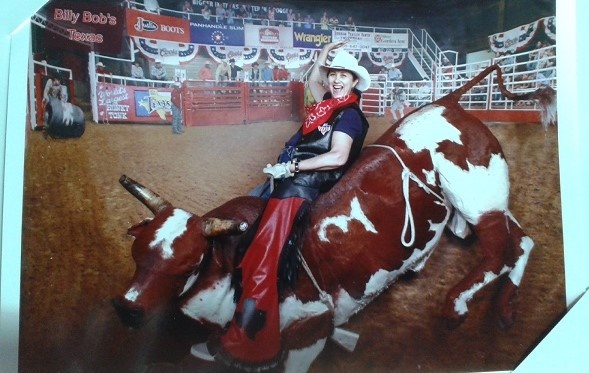 And if you want to have a really good time, then try the bucking bull.

There’s so much more to Dallas and Fort Worth and I’d recommend at least three to four days for a fun time and soak up the southern hospitality.