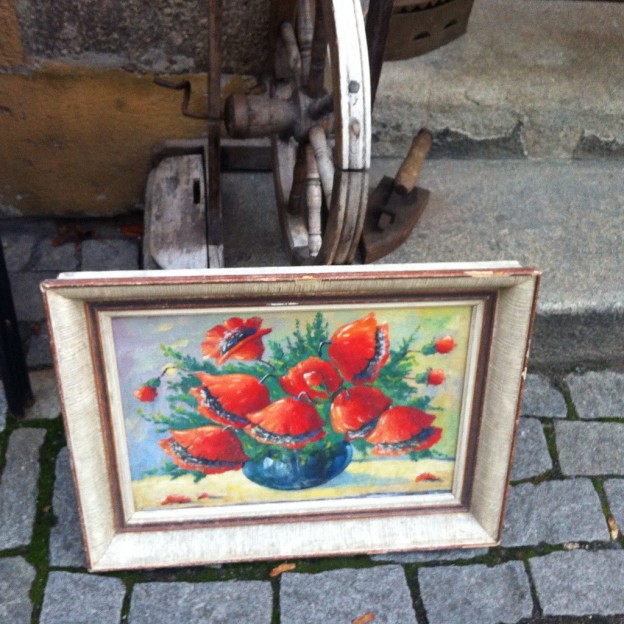 It’s Armistice Day 2015 and as much as I’d love to take this painting home with me, it won’t fit. However, it depicts how I feel about leaving Cesky Krumlov – bit sad. 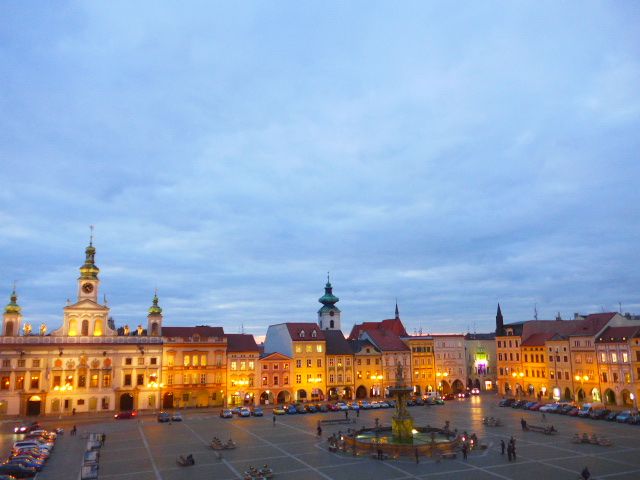 However, the good news is that Česky Budějovice is just a short stop away and has the Budweiser Brewery to check out the next day …

This is the largest city in the South Bohemian Region as well as its political and commercial capital. It’s an excellent place to visit if you want to escape the large numbers of tourists in Prague or nearby Cesky Krumlov. 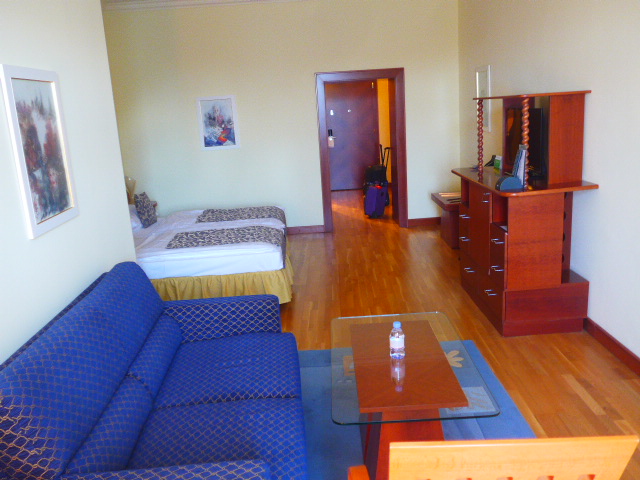 Grand Hotel Zvon is definitely worth considering as its outlook is over the Market Square and historic centre. Excellent location with clean, large rooms, a desk and free internet is always desirable. 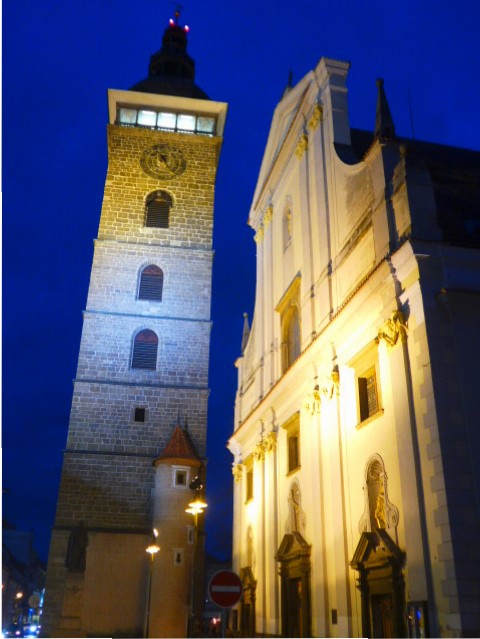 Cathedral of St Nicholas was significantly rebuilt several times and during the 16th century it acquired a new bell tower called the Black Tower. 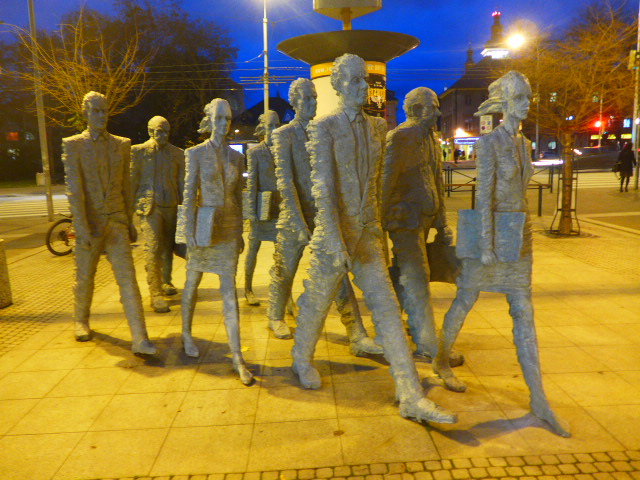 The statue group Humanoidi was placed for the first time in in the summer of 2007. Thereafter the statues were on display in many other places until they returned in October 2009. 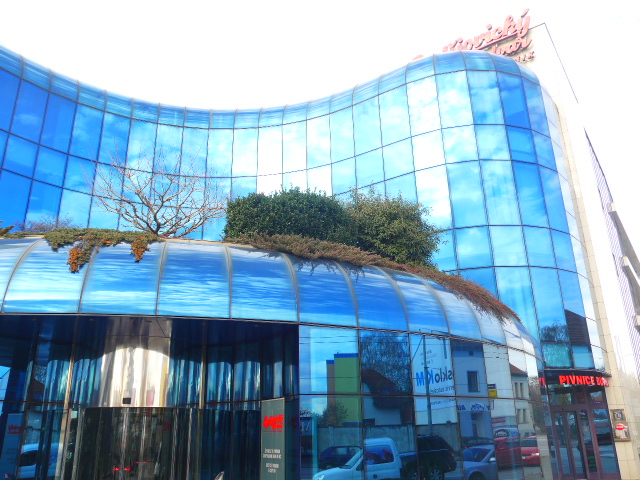 Take a tour of the town’s largest brewery and home of “Budweiser” brand beer which is sold in most of Europe. Call in several days in advance to schedule a tour, or if that’s not possible, tours for visitors without reservations take place each day at 2:00 pm during peak season which is from 1st March to 31st December. 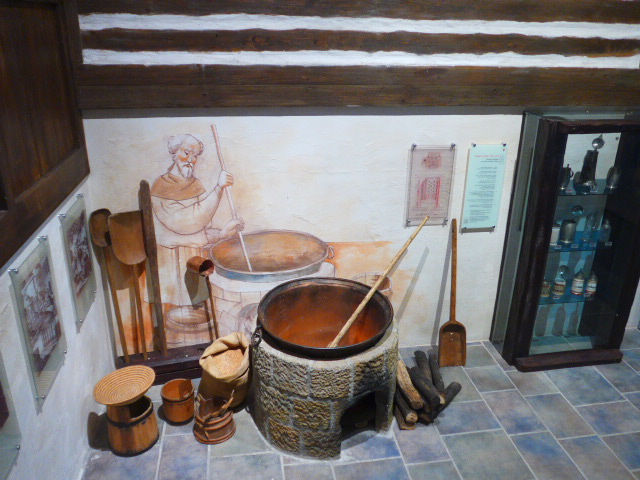 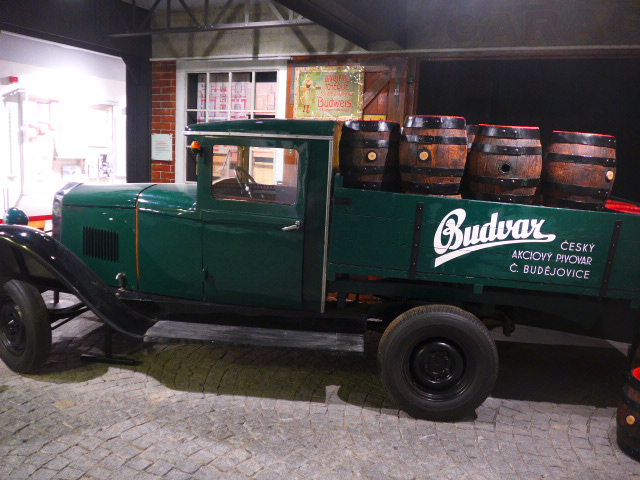 Price of admission is 125 CZK/person (approx AUD7.20 on today’s exchange rate) and visitors age 18 or over are also able to visit their beer tasting cellar. 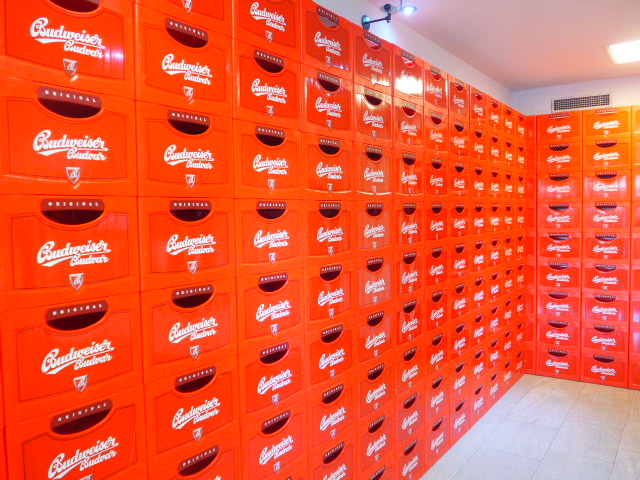 Incidentally, this is not the same as the “Budweiser” beer sold in the United States and Canada; due to trademark disputes over the name with US-based Anheuser-Busch, this is sold in the Americas under the “Budvar” or “Czechvar” names. 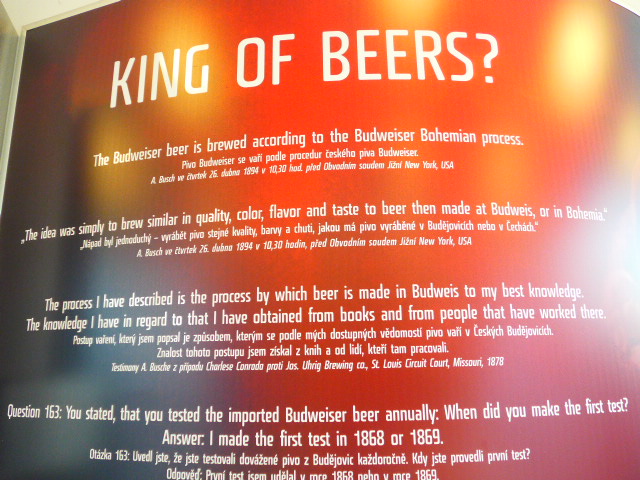 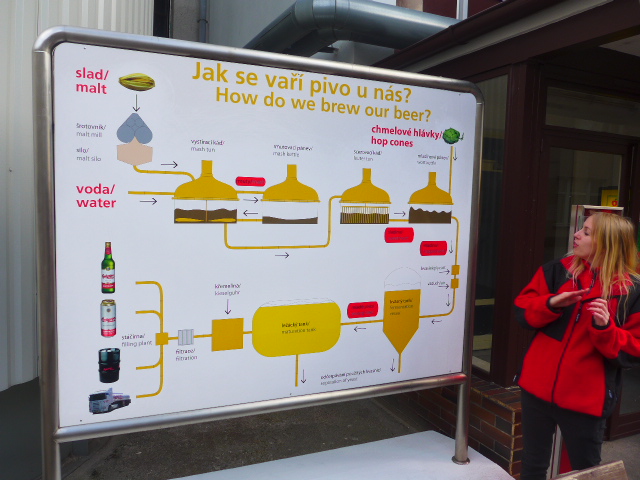 Our tour guide takes us through the processes. 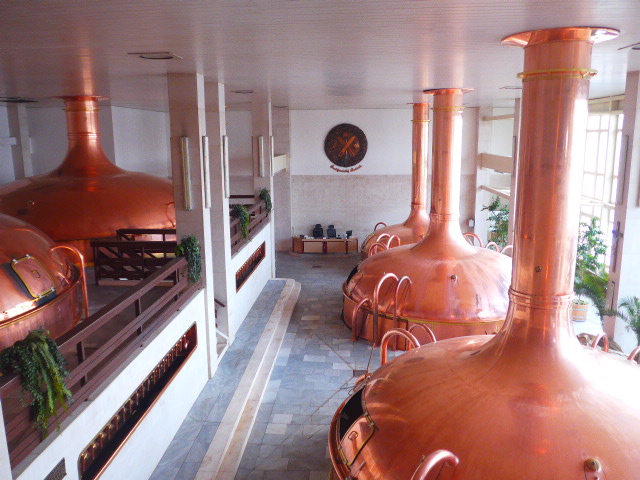 The brewery’s own water drawn from more than 300 metres deep wells and top-class brewer’s yeast are used to make this beer. 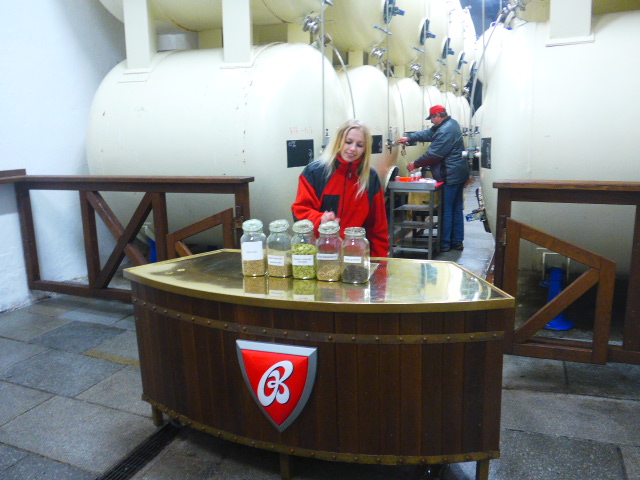 Surrounded by the aroma of the Moravian malt and the hops from Žatec you will find out about the secrets of how the world-famous Budweiser Budvar lager is brewed.

As a part of the tour you will taste Budweiser Budvar pale lager right in the lager cellar (available only for the visitors older than 18). 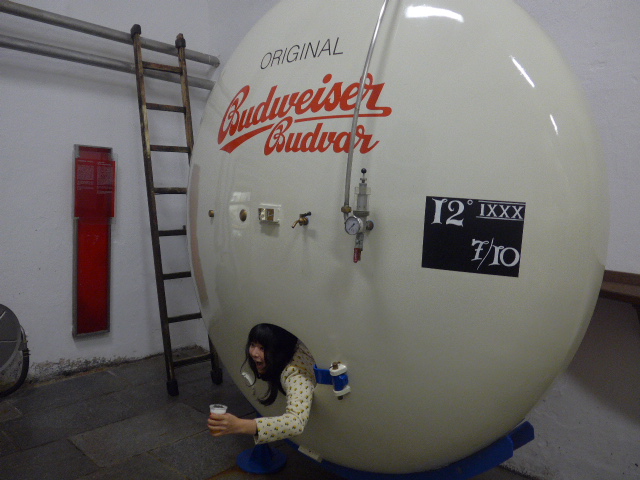 You’ll never find me in an enclosed space like this … Even after a few bevvies! 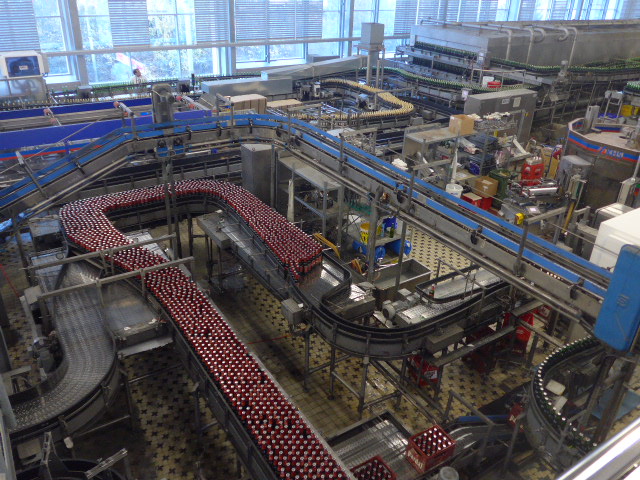 Part of the production line within the factory. 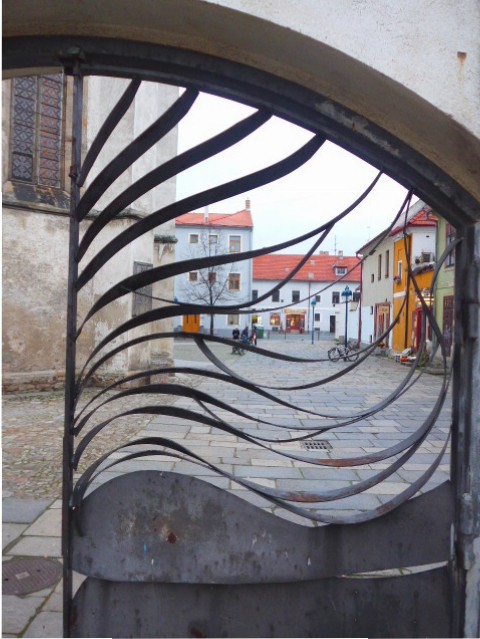 Time to head back to the city and check out some of the other sights. 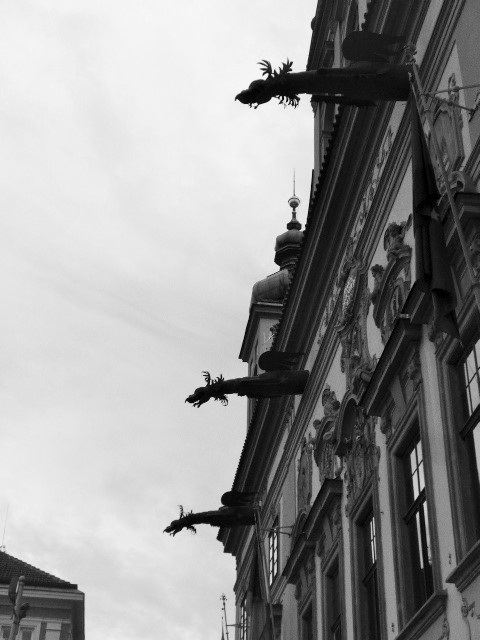 The city’s also known by its German name Budweis and famous for it’s baroque and renaissance architecture. Lovely to visit and much cheaper than its big brother Prague. 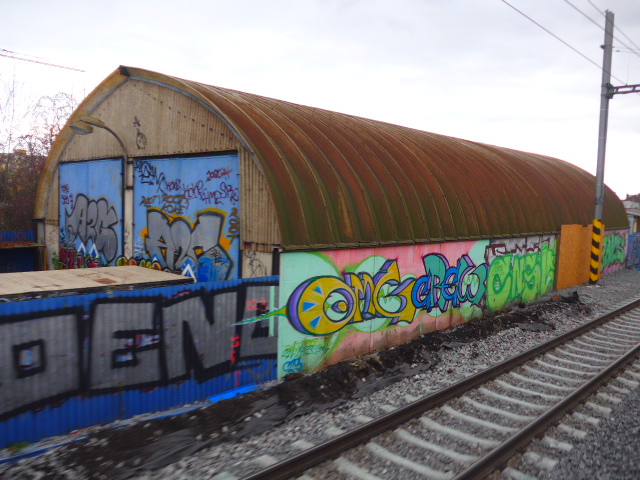 Well its bye for now and I’m heading off to Prague as the next stop.