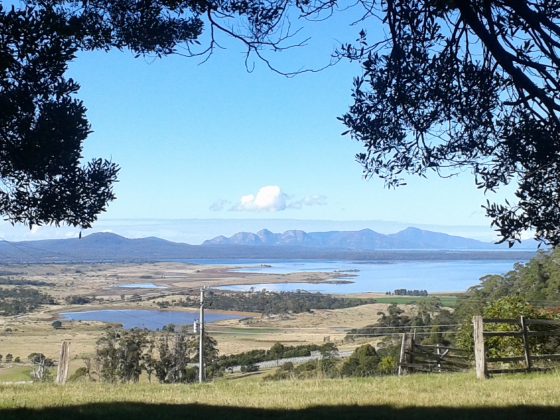 Look for www.2rrr.org.au and click on the link at the top – ‘Listen Online Now’ to stream from anywhere in the world. 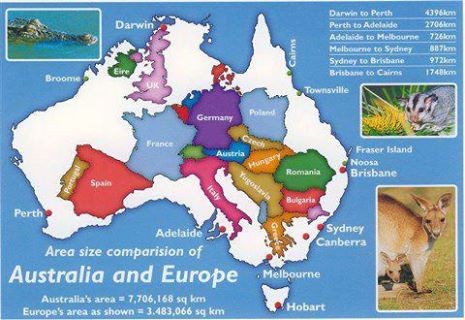 Having now returned from Europe, I can only surmise the enormity of both continents and give a little perspective regarding the sheer scope of the country of which I live.

Superimposed within this map of Australia, Europe covers a hefty chunk of its area. I’ve no doubt Scandinavia would fit quite comfortably in the available open space of Western Australia (WA) with Tasmania still begging to be filled. I’m often asked why Australians are coastal dwellers, and the answer is really quite simple, being one country and for the most part it’s desert and only 6% being arable.

What truly intrigues me? The European countries shown here, embrace their own culture, language, cuisine and currency and have done so for centuries. Within an hour or so you can easily find yourself in the next country grappling with new schemas and ideals of which you need to adapt to and quickly at times.

The culture of Australia is essentially a Western culture influenced by the unique geography of the Australian continent, the diverse input of Aboriginal and Torres Strait Islander peoples, along with the British colonisation of Australia which began in 1788 and the various waves of multi-ethnic migration that followed. This includes my parents, who after WWII migrated as Displaced Persons and arrived in Melbourne 1949. Whilst Australia at the time needed to boost its economy, the slogan ‘Populate or Perish’, of which saw waves of war-torn and tired peoples from many of these European countries shown above; also including Russia, Ukraine and the Baltics – just to name a few. Because of this, as a nation we enjoy rich diverse multicultural influences and believe ‘each to its own’ provided you respect that of another’s belief system whilst practising your own ideals.

As a child growing up in a country town, often we would visit many families of which mine became friends or may have made the passage to Australia with. And to be honest, to me it was a small European community in itself, who with understanding and determination desperately wanted to make a better life and be accepted. Although at times, I did feel many were missing their ‘old life’ from abroad as the heat, animals including all creatures that creep and crawl, along with the flora and fauna being peculiar to them just wasn’t like home.

Although the official government policy was that migrants should assimilate into Australia’s Anglo Celtic culture, many celebrated their origins through membership of clubs, sporting and religious organisations. For some such community organisations made a huge difference in overcoming a sense of isolation. For others it came when they had their own homes and families could grow familiar fruits and vegetables and eat traditional foods once again.However, the avalanche of various cuisines has made Australia one of the most diverse when it comes to being spoilt for food choices including our Asian neighbour’s input.

How lucky are we to be blessed with a richness of worldliness making this a great country, living in an ancient land whereby the custodial indigenous people have respected it for centuries in their own traditional ways.

Excerpt from Dorothea Mackellar’s ‘My Country’.
I love a sunburnt country,
A land of sweeping plains,
Of ragged mountain ranges,
Of droughts and flooding rains.
I love her far horizons,
I love her jewel-sea,
Her beauty and her terror –
The wide brown land for me!