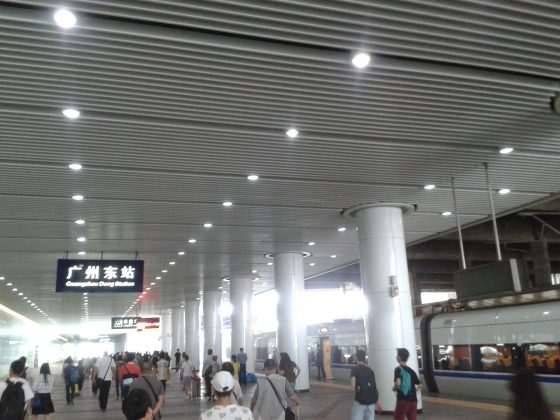 Trains in China are fast and speed past crawling traffic in the bigger cities. The train to Guangzhou from Shenzhen takes about an hour and fares are approximately CNY40 Economy and First Class CNY80 one way per adult. Upon arrival at Guangzhou Station the signage is clear in both Chinese and English.

Guangjiu (Guangzhou-Kowloon in Hong Kong) Railway stretches from Guangzhou in the north to Hung Hom, Kowloon in the south and is 119 kilometres away if you’re considering returning to Hong Kong. 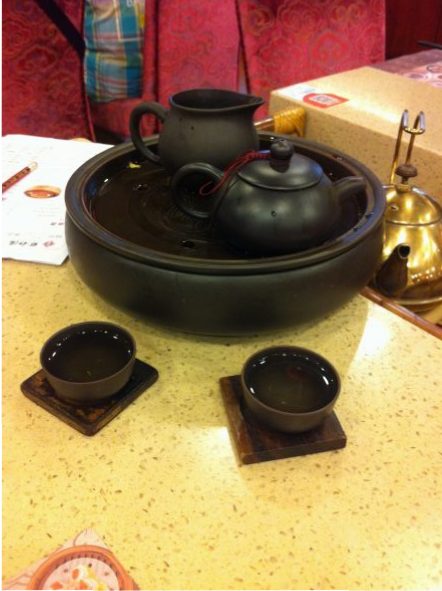 Traditional cuisine tea drinking with fragrant dried chrysanthemum flowers are steeped in hot water (usually 90 to 95 degrees celsius after cooling from being boiled) either in a teapot, cup or glass.  This has become quite a habit for me now, not to mention addictive! 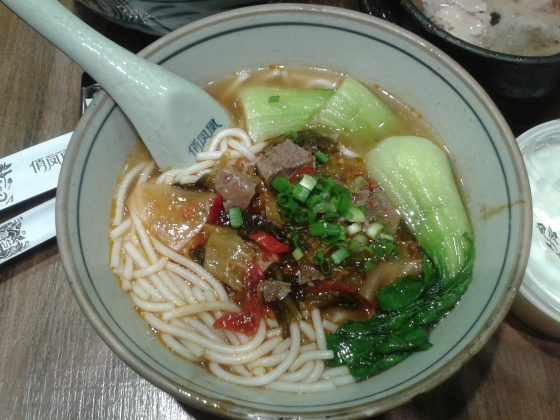 First up on a Gourmet Tour is a spicy beef  noodle soup and is a perfect luncheon for a full day of sight seeing around Guangzhou. 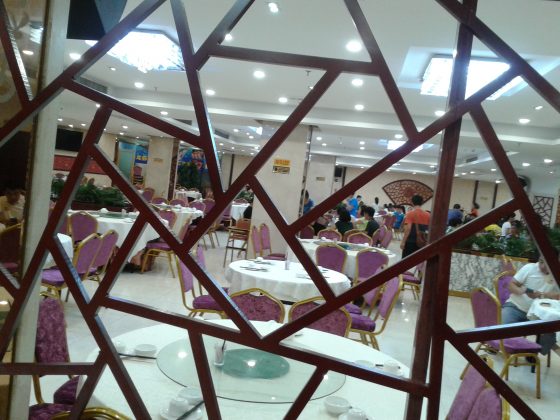 There’s a myriad of restaurants which are well patronized with hoards of locals coming in with their families for a treat of some of the best and most traditional dishes. 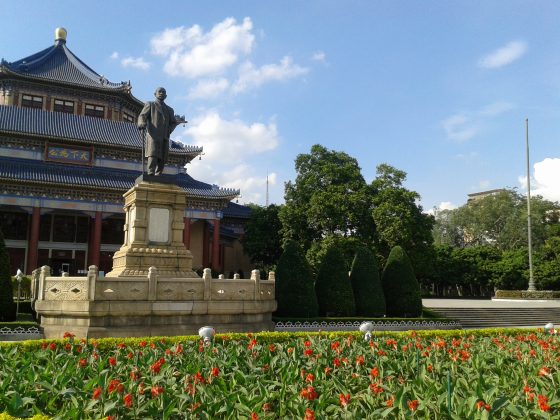 Built in the memory of the Founding Father Dr. Sun Yat-Sen, Sun Yat-sen Memorial Hall is reputed as one of the most outstanding landmarks of Guangzhou. 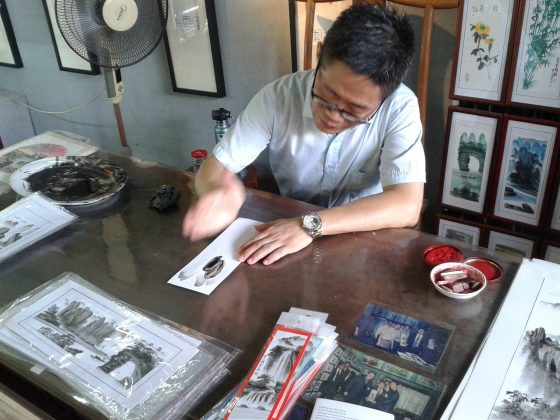 As an art for more than 3,000 years, Chinese calligraphy is regarded as an illustrious tradition in its culture. It’s neither just writing Chinese characters nor writing well. It’s actually an art to express spirituality and this artistry carries with it the calligrapher’s personality, thoughts and ideas. 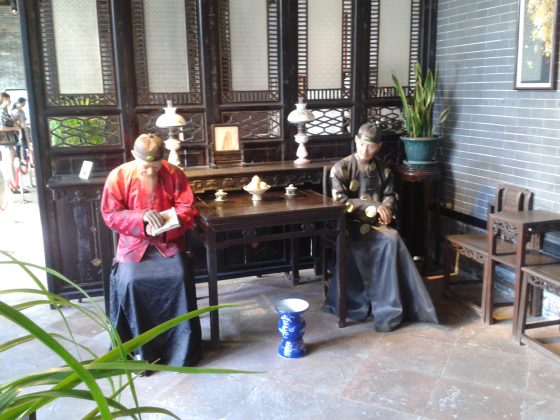 19th-century architecture shown at the Chen Clan Academy and story telling of traditional and ancient times is replicated here. 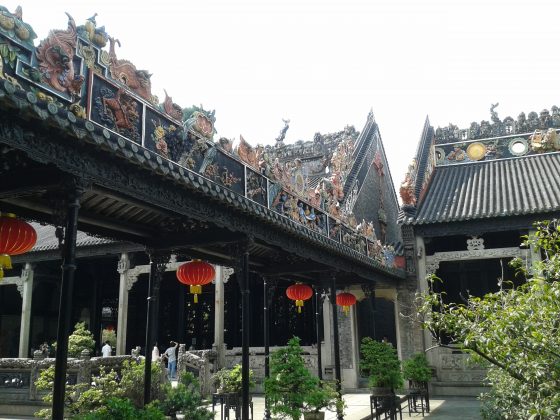 Chen Clan Academy, also known as Ancestral Temple of the Chen Family, was built as a college in 1888 and was designated as the Guangdong Museum of Folk Art in 1959. 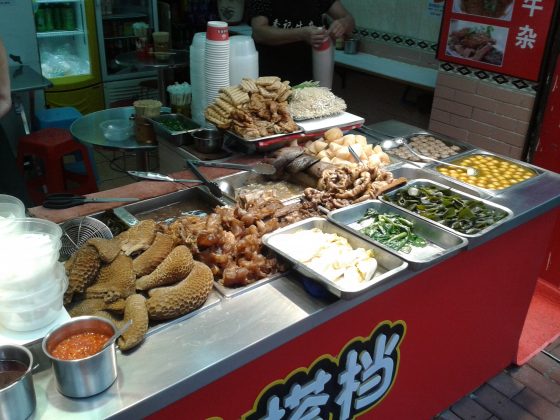 \
Oh really, more food! Local street specialities are found everywhere, just need to know what it is you like and then have it cooked in front of you … Thought I’d give the sponge-like loofa looking things a miss … 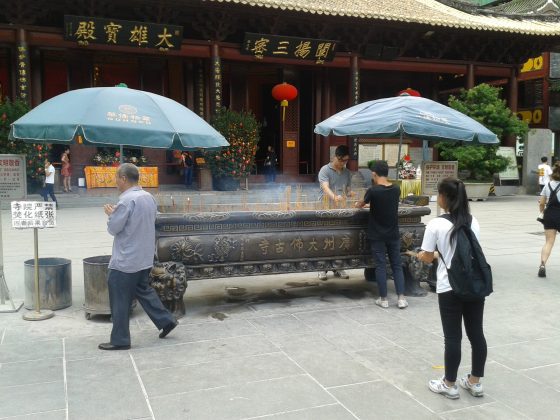 Time out to reflect. In China, Confucianism, Daoism and Buddhism are the three main religious beliefs, with others being supplementary to them. 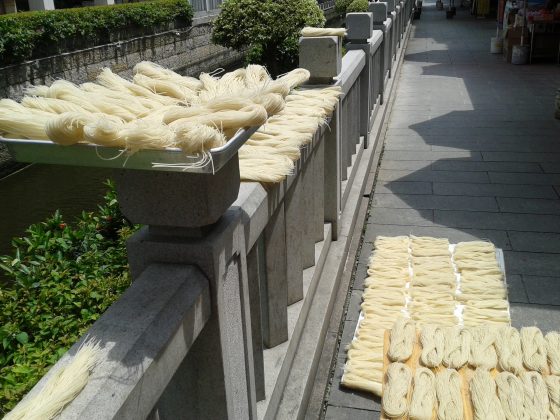 Noodles ready for sale. Long noodles mean having a long life. So don’t eat any short ones! The picturesque environs of Lizhiwan Canal and a variety of goods at the Qingping Market make for a lovely day out. 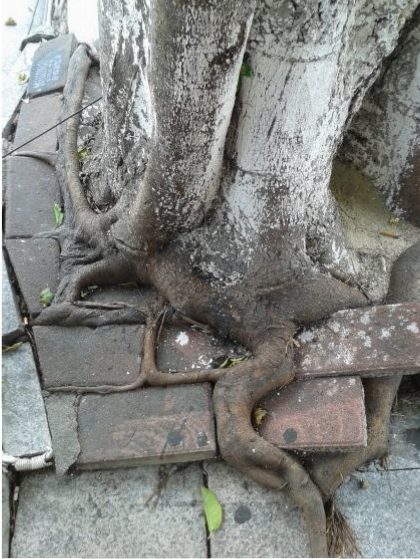 Tree struggling for space in an ancient land being built out with modernisation and technology. 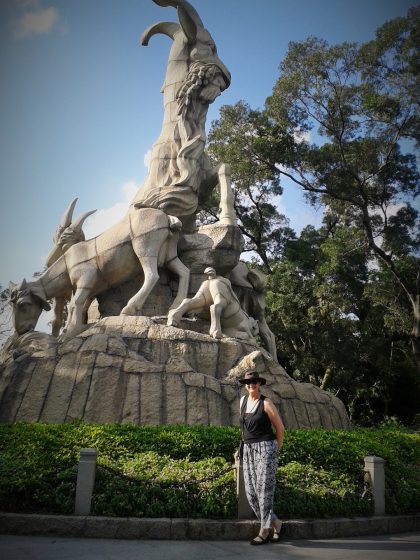 Five Ram Statue built in 1959 to give the local farmers a means of praying for prosperity and a sizeable yield from their crops when droughts have been prevalent in the past.

You can wander through the expansive green oasis of Yuexiu Park and explore the highlights of the park, including Zhenhai Tower and Temple Of The Five Immortals. 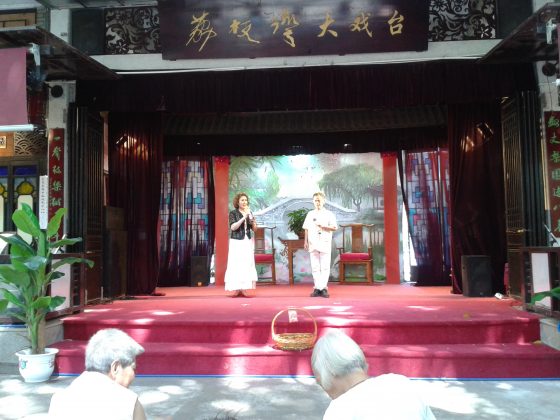 After lunch – out and about with all the Aunties and Uncles. Theatre in the park is where retirees gather for some afternoon delights, and in particular traditional performances which only require a small donation which keeps themselves entertained. 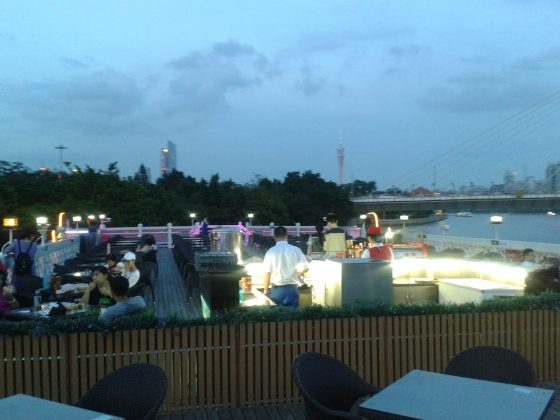 Gourmet dinner stop, ideal for an authentic meal of Southern Chinese cuisine before sailing off for an hour-long cruise along the Pearl River. Quite spectacular with brightly lit up buildings and bridges constantly changing colours. 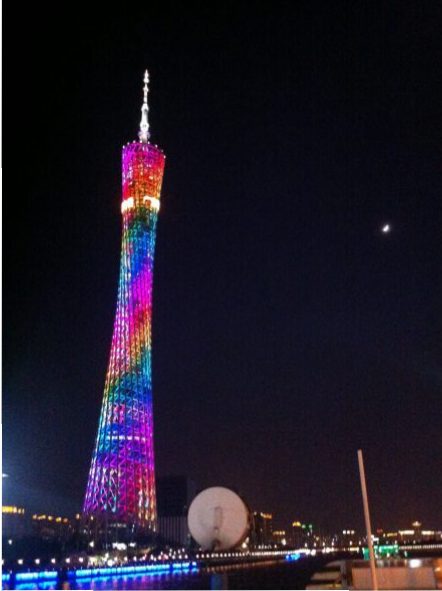 Buildings which are easily recognisable at night such as The Canton Tower, or Guangzhou Tower. It’s a 604 metres tall multi-purpose observation tower in the Haizhu District and here showing itself off whilst we’re enjoying the river cruise.

Bright in light – Liede Bridge opened in 2009 crosses over the  Pearl River and the 4.3 kilometres (2.7 miles) bridge connects Pazhou Island in Haizhu District with Tianhe. 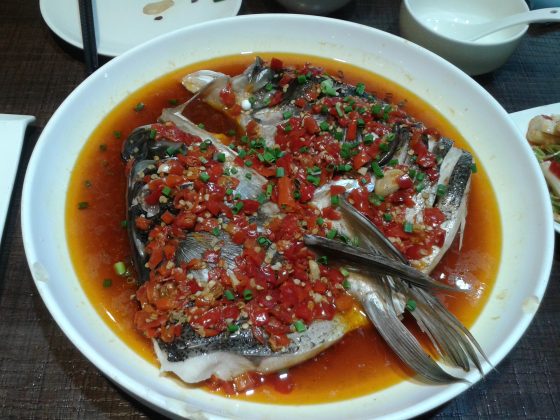 Guangzhou, formerly known as Canton is the birthplace of Cantonese cuisine, one of the eight traditional culinary cuisines of China. As a major trading port, Guangzhou / Canton has many imported ingredients, as well as fresh ingredients from farms or fisheries. Guangzhou Street Food shares many similarities with Hong Kong cuisine as the two cities are located relatively near each other and has a cross influence.

There’s a myriad of flights from both Shenzhen and Guangzhou to all other destinations within China.