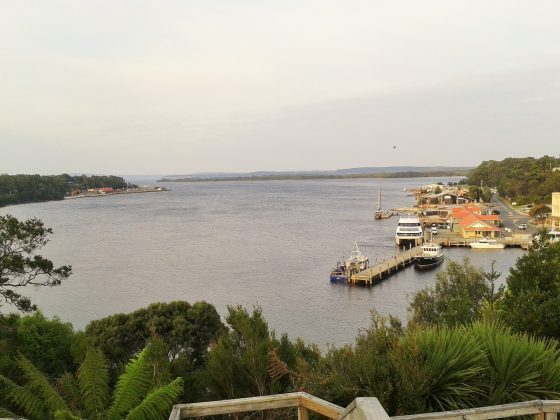 For me it’s an early start to the Gordon River Cruise and looking down from Strahan Village’s accommodation tucked up on the hillside, here’s a fabulous view of what’s ahead for the day. Can’t wait to walk down to the pier and set sail to see the UNESCO listedTasmanian Wilderness World Heritage Area on the state’s west coast. 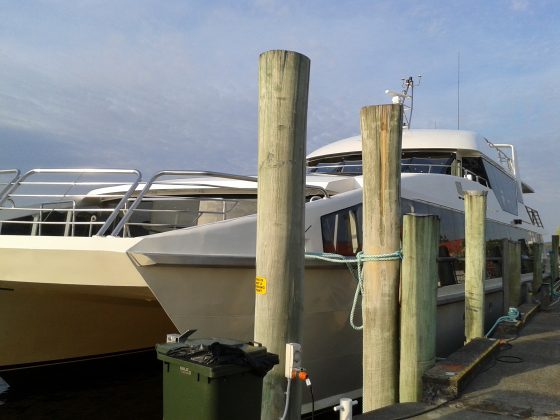 One of the Gordon River Cruise’s vessels – the stately Lady Jane Franklin II is a large, fast and stable catamaran which carries up to 200 passengers and has on board cinematic floor-to-ceiling windows giving a maximum vantage in being able to witness some of the  most unique natural wilderness – not just in Australia but the world. 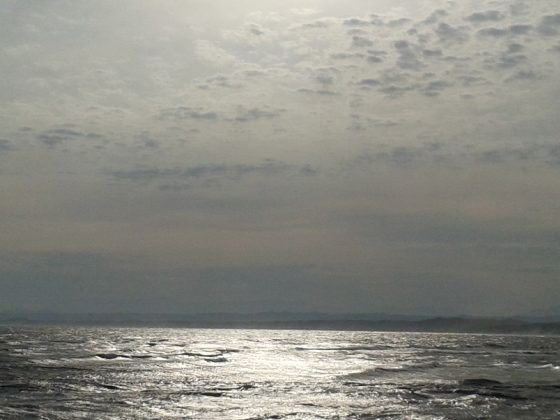 Sailing out of the sheltered Macquarie Harbour, it’s just a perfect day with mirror-like waters ahead before entering Hells Gates. 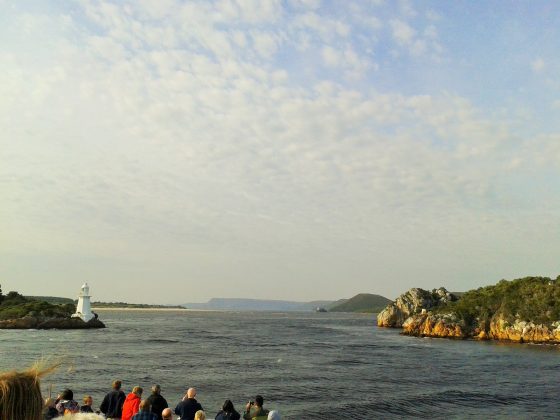 It’s a notoriously shallow and dangerous channel entrance from/to the harbour. The actual channel is between Macquarie Heads on the west and Entrance Island on the east (the main length of the harbour runs southeast of Hells Gates).

The name of the channel relates to the original convicts’ claims that it was their point of ‘entrance to Hell’. Their Hell being the Macquarie Harbour Penal Station on Sarah Island and the outlying surrounds of the harbour of which we visit later on. 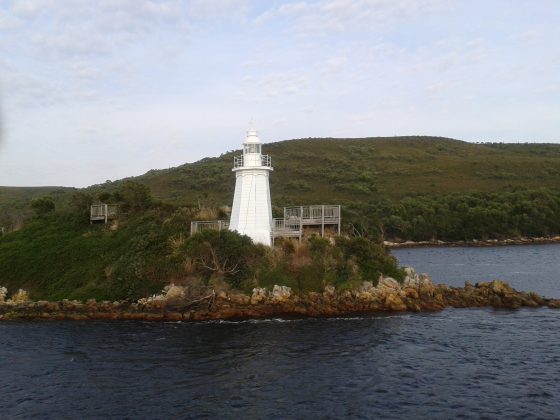 Passing by Entrance Island whereby the lights were built before the Cape Sorell lighthouse which is also heritage listed. 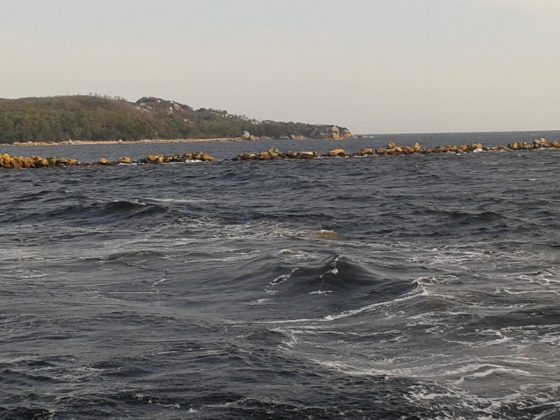 Leaving the protected harbour, we’re all enjoying morning tea or a glass of bubbly by now – especially if you’ve a ticket to the Captain’s Premier Upper Deck! 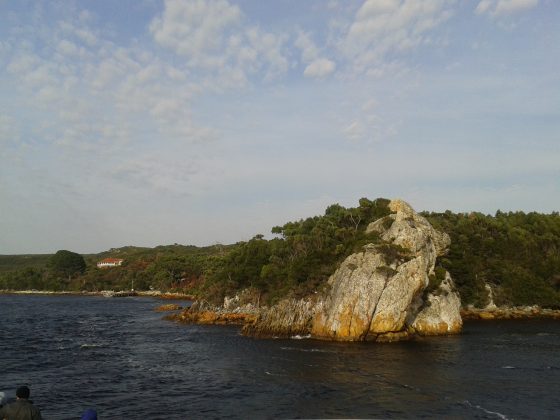 Magnificent views of the foreshores with calm waters makes for a very relaxing day with an excellent commentary given by the staff. 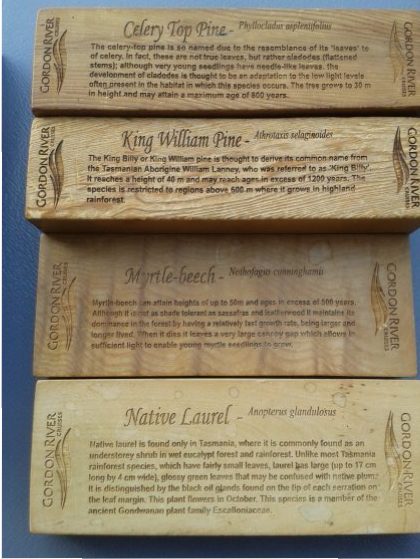 On board we’re given the opportunity to understand some of the timbers of the region which are slow-growing and native to the UNESCO Widerness area. 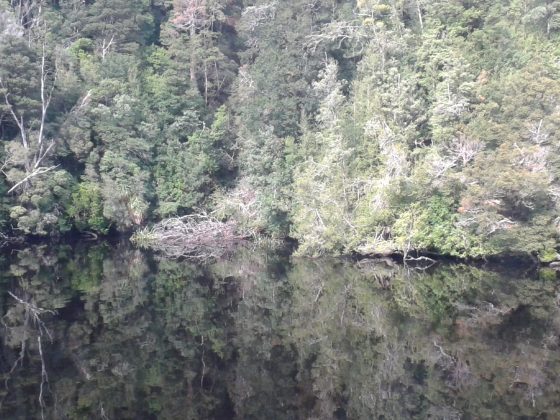 Huon Pine is the prince of Tasmanian timbers with its richness of colour and figure made it one of the world’s most desirable furniture and veneering timbers. It grows at a rate of between 0.3 – 2 mm per year. Because of its scarcity, its price tag is exorbitant compared to other timbers sought for woodwork purposes. 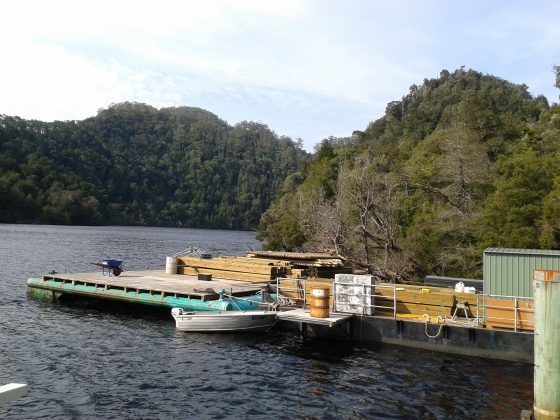 Disembarking at Heritage Landing Nature Walk allows us an insight into what the wooded region is really like when on land. The Tasmanian Parks and Wildlife Service are doing work on the boardwalks to conserve the natural environment. 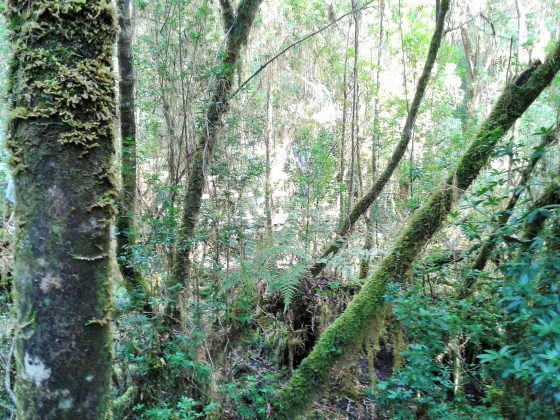 It’s incredibly dense and you have a sense of the magnificent slow-growing  fauna which has taken place within this ancient forest. It’s definitely a ‘survival of the fittest’ here with plants vying for a patch! 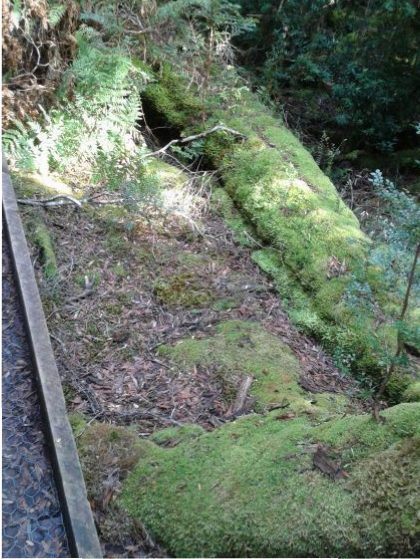 It’s only a short walkway which has been raised to ensure our walking on the ground does not impact on the vegetation. 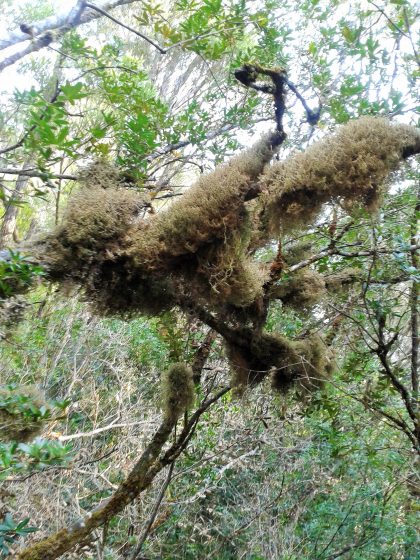 Feels like a really magical place to be and honored we’re permitted to see it first hand from our day out. Ordinarily tourists only have access by taking one of the chartered cruises such as this one. 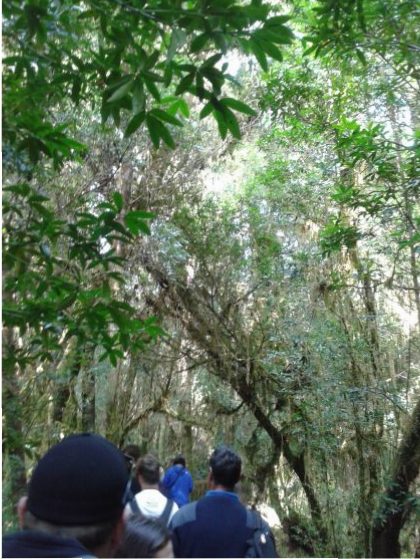 Shaded throughout the day the undergrowth never dries out and feels quite cool. 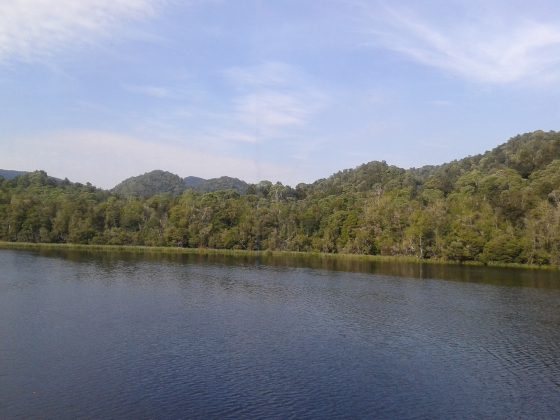 The Franklin Dam or Gordon-below-Franklin Dam project was a proposed dam on the Gordon River – and luckily it had never been constructed. Thankfully, the movement which eventually led to the project’s cancellation became one of the most significant environmental campaigns in Australian history. In December 1982, the dam site was occupied by protesters leading to widespread arrests and world publicity gained momentum. The dispute became a federal issue the following year in March. A legal battle between the Federal Government and the Tasmania Government followed resulting in a landmark High Court ruling in the Federal Government’s favour.

When you see for yourself the beauty and serenity of the area along with the untouched natural wilderness; it’s a relief to know some things in life are sacred and should be kept as such.

We’re now heading off to Sarah Island with lunch on board which is buffet style and we’re all feeling a little hungry after our short sojourn on land. 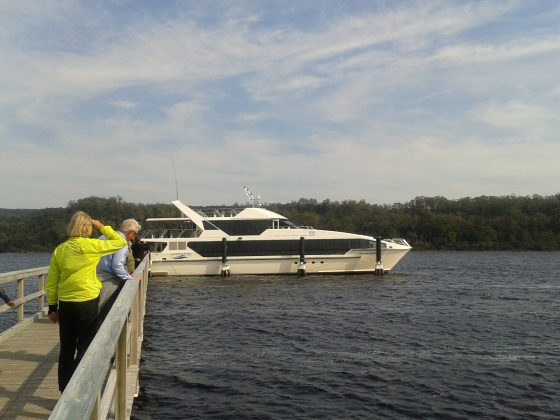 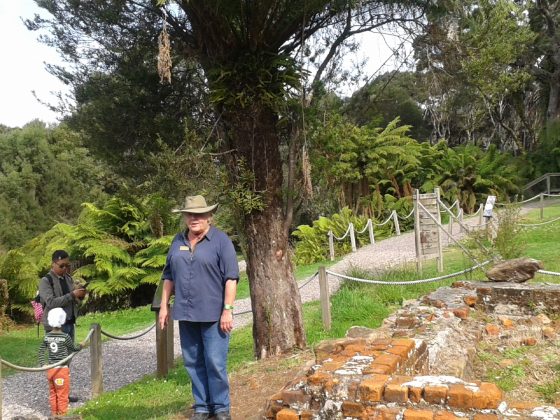 This isolated island was a Penal Settlement between 1822 and 1833 from the United Kingdom and established before the more well-known Port Arthur as a place of ‘secondary’ punishment. Basically an attempt to control the ‘uncontrollable’. Or perhaps steal a loaf of bread and then you were transported to what was considered ‘the end of the earth’ if caught. 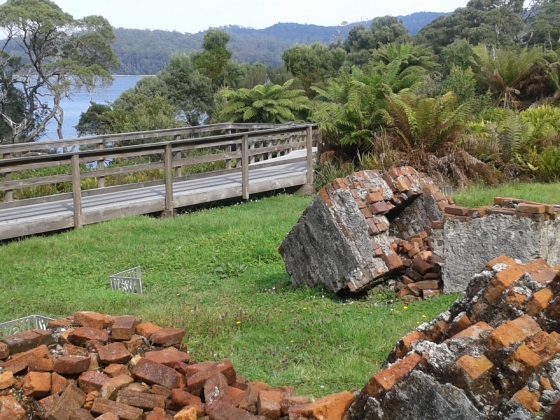 There are some obvious ruins on the Island today. Most of the buildings were of timber construction which has been removed or rotted. Some deliberate damage many years ago by those who wanted the island’s history forgotten and the activity of souvenir collectors in the late 19th Century and early 20th Century have depleted the brick and stone structures. 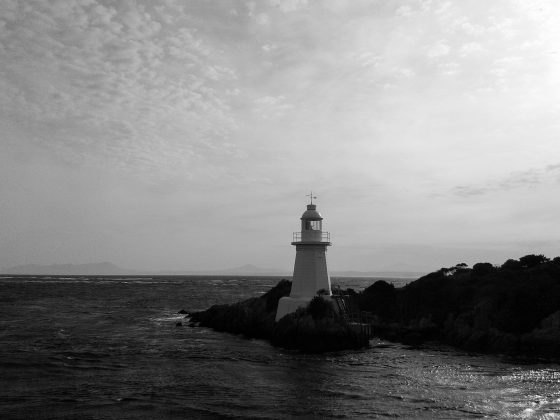 However, at the end of the day we’re all glad we didn’t live in the early days Australia was discovered and witnessed the hardships of men and women who ultimately settled in a new country; one which is on a latitude in the southern hemisphere being the equivalent to the north – or in other words, a world away! 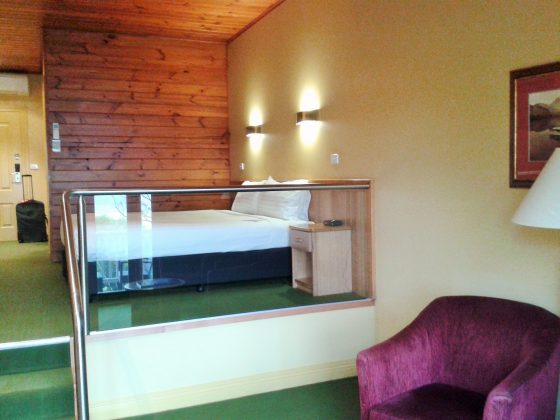 Overnighting at Strahan Village, it offers 142 rooms with free WiFi throughout and designed to complement the seaside atmosphere. Comfortable rooms with a sunken lounge area to relax and unwind. There’s also a bar and restaurant for those who’d rather stay in and enjoy the amenities. 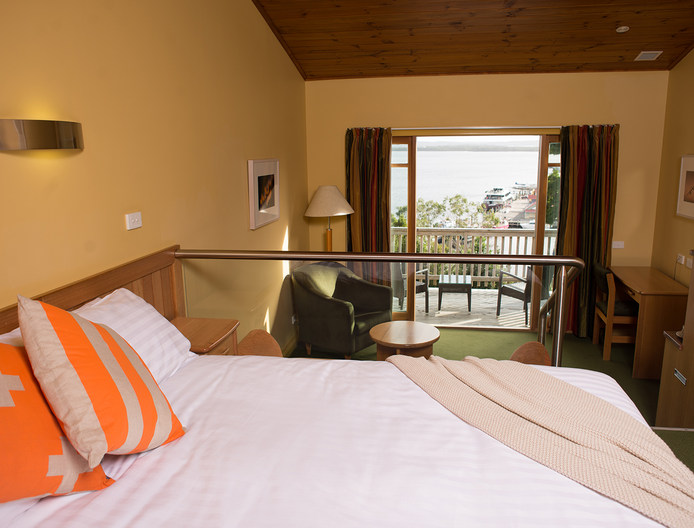 With an eagle’s-eye view of the harbour, you can choose accommodation whereby a balcony enhances the experience. Then simply, admire the changing light while eating in overlooking the harbour and pondering what was a fabulous day out cruising.