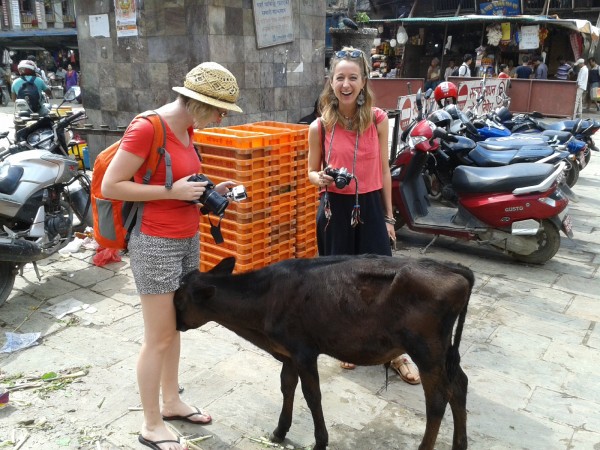 We’re travelling with Lisa Pagotto (left) who is the Aussie Founder and CEO of Crooked Compass which was launched back in May 2014. Lisa and her team are committed to sharing inspirational travel ideas and expert knowledge specialising in small group touring. Here with travel writer Nina Karnikowski who have both just met up with a local and, he’s obviously taken a liking to Lisa’s coconut body butter scent …

Little fellas like this one are seen frequently and are held in high regard due to religious beliefs of the Hindu faith – so no need to worry, he’s safe. 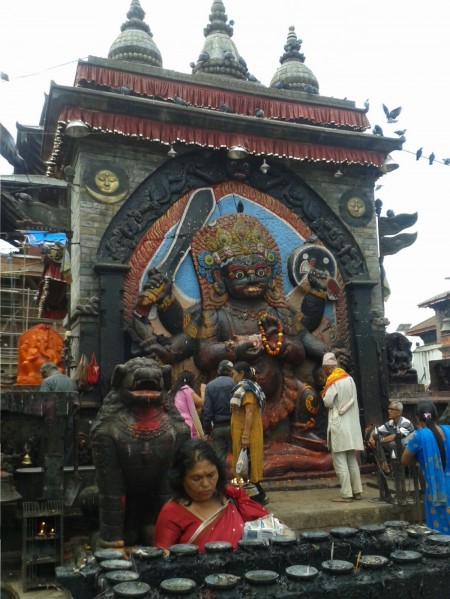 There’s a plethora of temples, pagodas and monuments dating back from the 12th Century and are generally in close proximity to the most notable heritage-listed sites. Walking around Kathmandu is a sensory overture and one of which the camera doesn’t take a break in case you miss something. 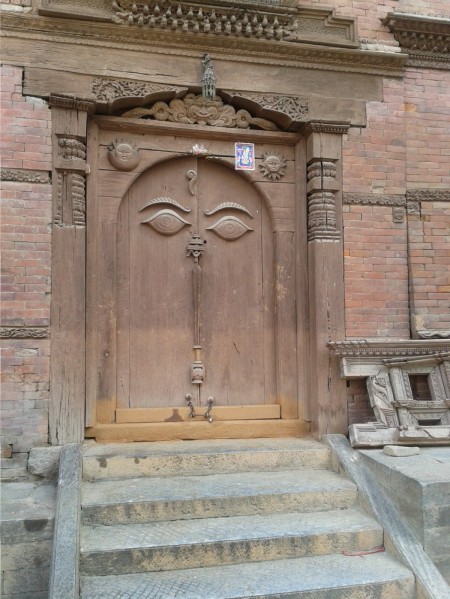 Looks very much like a door of wisdom which has seen much and thankfully after the devastation of the 2015 earthquake, there were many pieces salvaged and readied for repair at the Royal Palace. 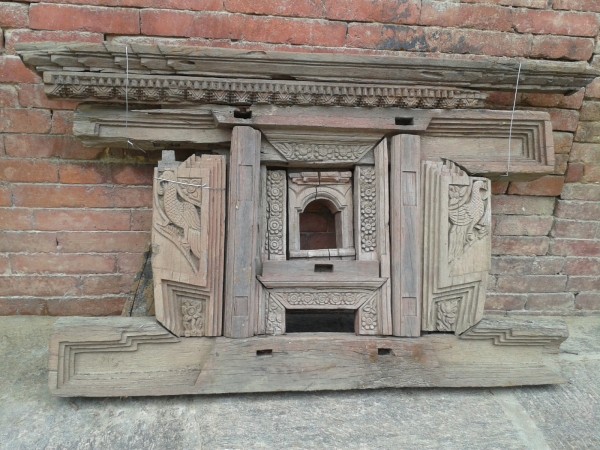 Carefully pieced together and tagged to ensure it be replaced in its original form and place. 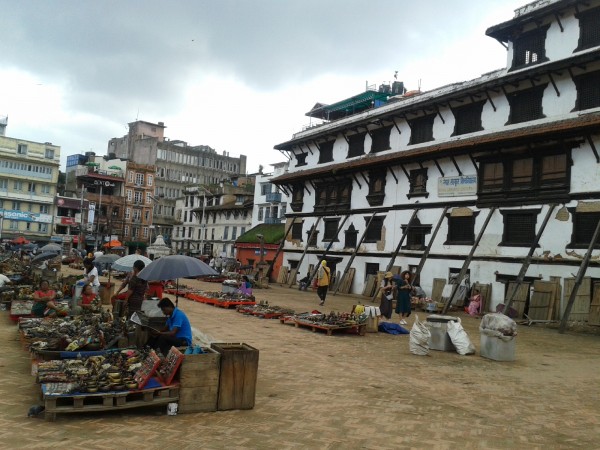 Not taking too many risks in having the structures become any more unstable, there’s a multitude of scaffolding around to maintain the support structures. 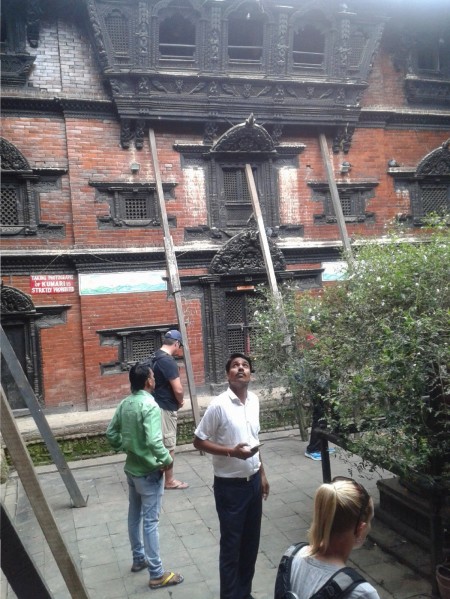 While there are several Kumaris throughout Nepal and some cities having several; the best known is the Royal Kumari of Kathmandu. At the tender age of ten, she lives here in the Kumari Ghar which is a palace in the centre of the city.  Briefly materialising at this window in the Living Goddess Temple, she appears at the same time each day to visitors who marvel at her presence and then hasty retreat.

In Nepal, a Kumari is a pre-pubescent girl selected from the Shakya Caste or Bajracharya clan of the Nepalese Newari community and once menstruation begins, she is no longer a Goddess. The onerous selection process begins again for a young girl not yet aged four years to replace her. 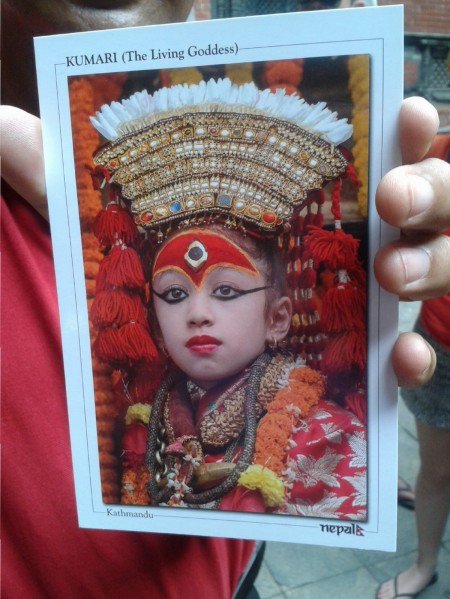 The Princess’s photo was shown to us by way of a postcard, otherwise photographs were not permitted to be taken by tourists – even if you could press the shutter in the brief time she emerged. 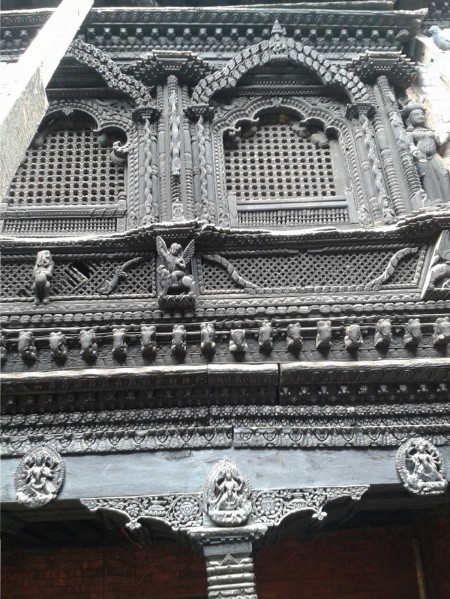 Upon closer inspection, you can see the intricate workmanship of the wood used throughout the palace and this particular temple. 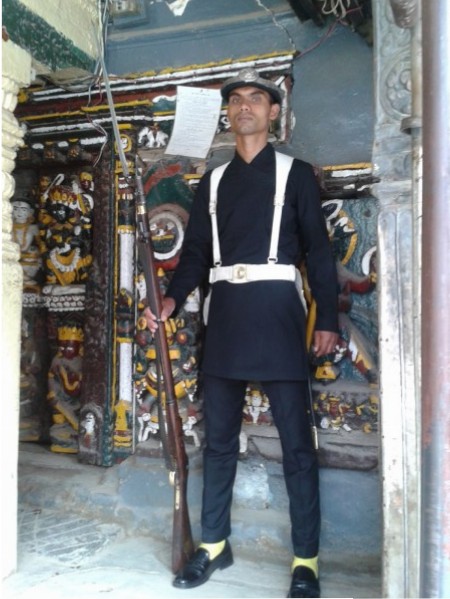 Guards keep a watchful eye over visitors. You can be forgiven in thinking he was a wax model …

Here is where Raj told us the story about the Nepalese Royal Massacre which occurred on 1st June, 2001 at the house in the grounds of the Narayanhity Royal Palace. Ten members of the Royal family including the King and Queen who were killed during a monthly reunion dinner of the family. 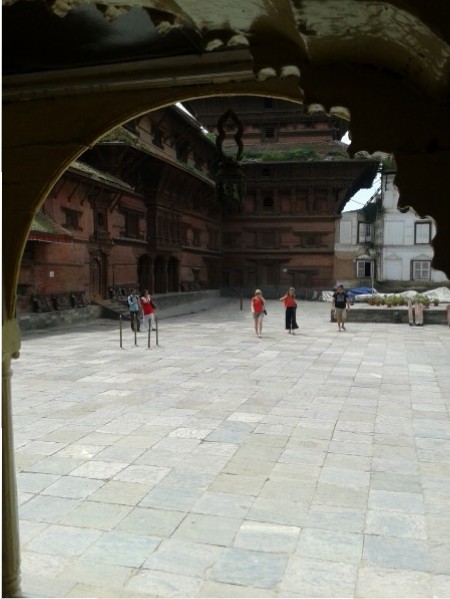 Walking around the buildings of the Royal Palace you can see the scale of the architecture and witness just how valuable its grand design and craftsmanship really is – and so worthy of restoration after the earthquake. 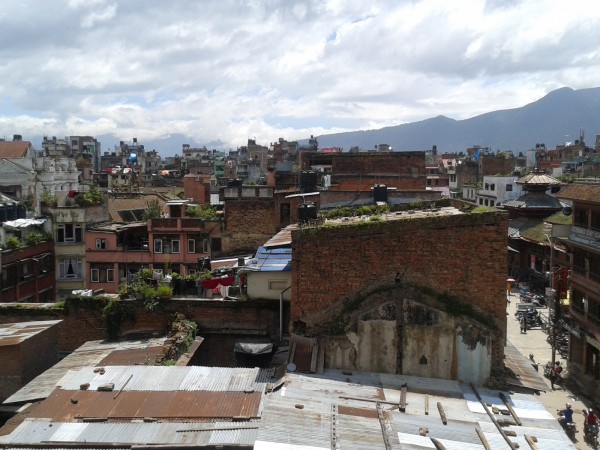 All that walking around allows us an invitation into one of the small restaurants and gaze over Kathmandu’s skyline. 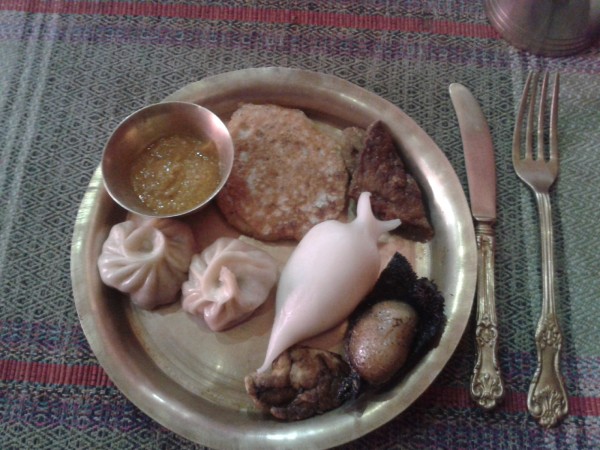 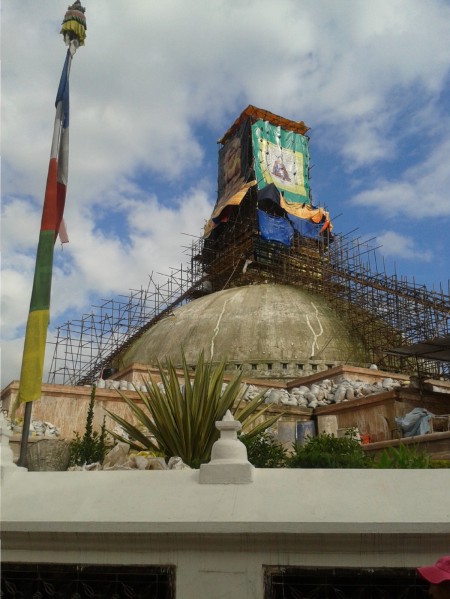 After heading down to the Boudanath Stupor, we found ourselves admiring yet another incredible structure and place of ancient worship.

Built some time around the 14th century, the huge meditative monument is said to have been created just after the passing of the Buddha. The huge offering site quickly become a focal point of worship in the area. The structure of the building consists of a giant dome, whereby on the top sits a Buddhist pyramid tower. 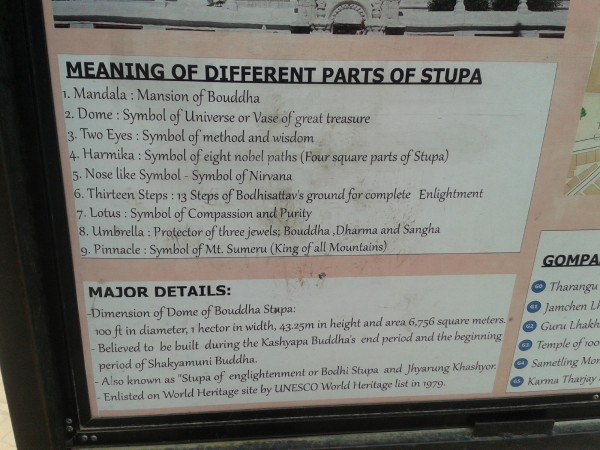 Some insight for those not familiar with the teachings. 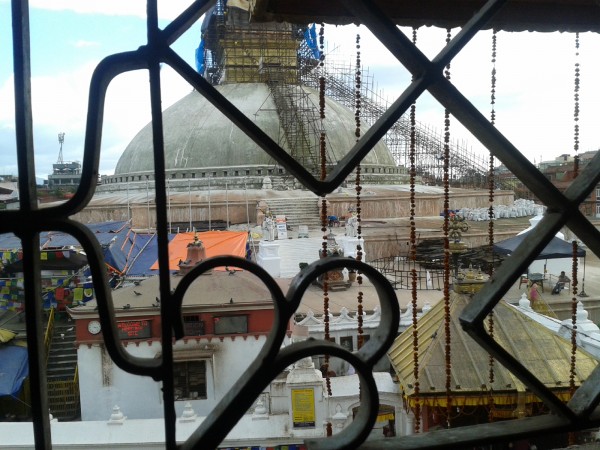 We climbed to the top of the building opposite with a bird’s-eye view of this magnificent complex – the massive mandala makes it one of the largest spherical Stupas in Nepal. 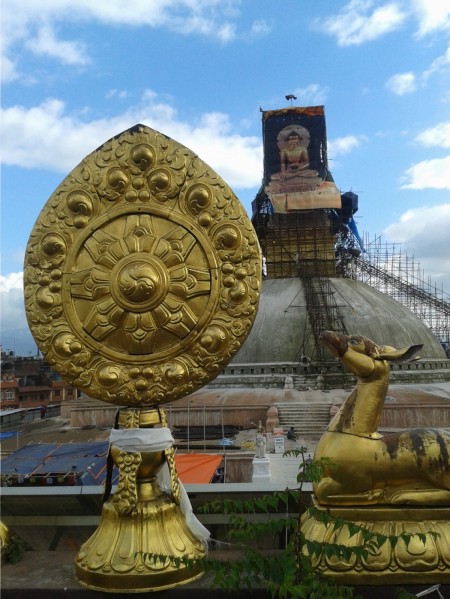 The influx of large populations of refugees from Tibet has seen the construction of over 50 Tibetan Gompas (Monasteries) around Boudhanath. As of 1979, Boudhanath also became a UNESCO World Heritage Site. Along with Swayambhunath, it’s one of the most popular tourist sites in the Kathmandu area. 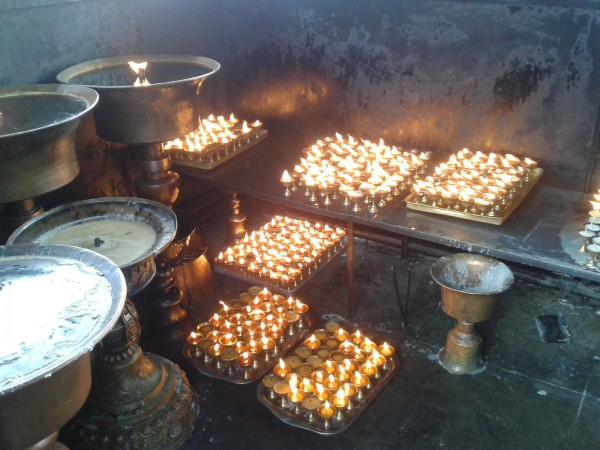 You can also light candles and take some time out to reflect regardless of your faith or beliefs. 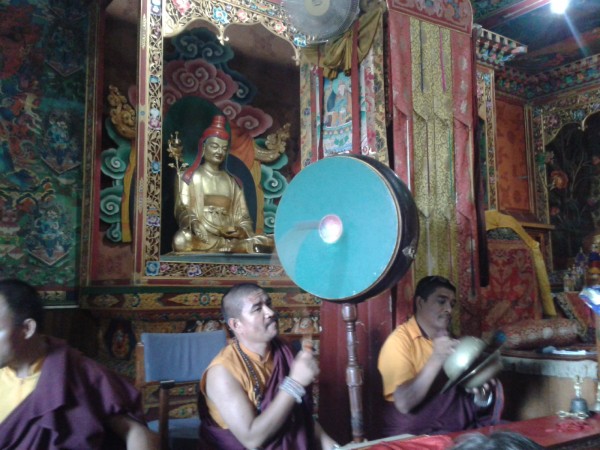 Thereafter, our group was allowed to partake in a ceremony whereby as individuals, we were presented with our own recital by one of the monks who in their own way was a blessing.

We’re told that during the days surrounding full moons, the air is often thick with incense and mantras sung by monks,  the number of people visiting this Stupa increases significantly along with the intensity of their mantras and prayers. 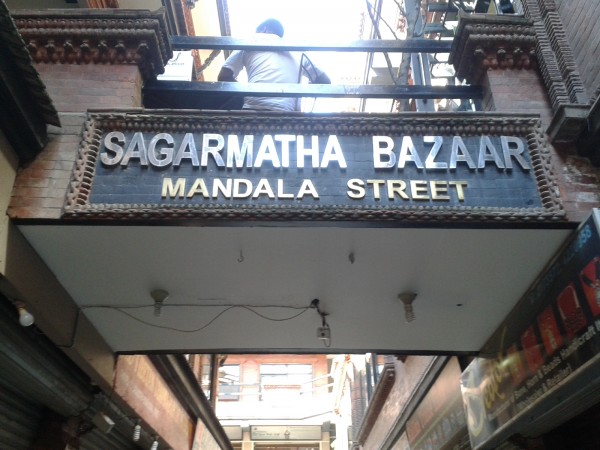 And, once finished saying our prayers and promising to be better people, we’re heading off for some retail therapy … Mandala Street Bazaar is a tourist hot spot and mecca for shopping. 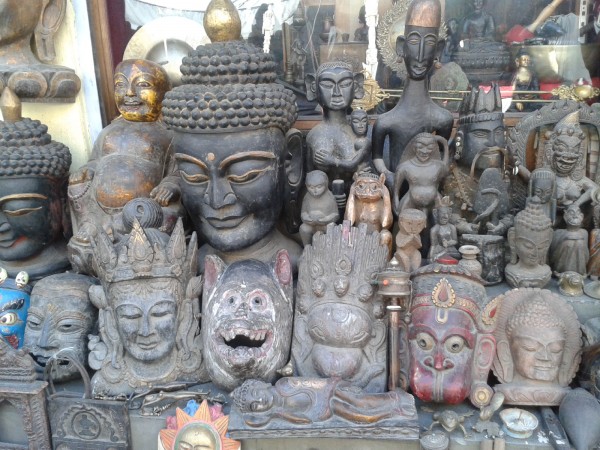 Here is where you’re going to find some great bargains, regardless of the fact it’s a touristy area, don’t forget when bargaining it’s not always big dollars you’re negotiating … Just do it and pay the money – stop haggling over 25 cents.

Next post we’re off to Chitwan National Park, probably need an elephant to help carry some of these goods around.