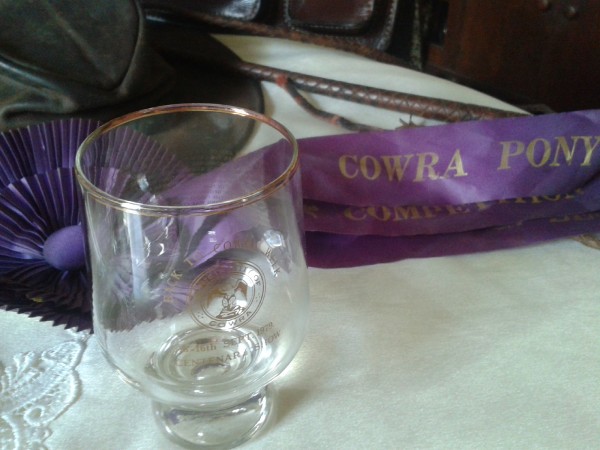 It’s amazing what you find in your own cupboard and this glass was a reminder of what it’s like to return to your own grass roots.  This blog post is about Back 2 Cowra last week 13-18 September, 2016.

The words written on my find are indicative of Cowra’s history.Back to Cowra Week 8th – 16th Sept. 1979‘The Gem of the Lachlan Valley’ lies in the rich valley between the Lachlan and Belabula Rivers. The name comes from an Aboriginal word meaning ‘rocks’. The area was first explored by G.W. Evans in 1815. The first lands were taken up in the district in 1830. The town population is presently 8,200 whilst town and district number approx. 13,000. The train service arrived in 1884. Following World War 2, which gave Cowra the tragic beginnings of a deep and growing friendship with Japan, came the commercial air service with Sydney. The new hospital building was completed in 1955 and has been updated continually since that time. The beautiful Japanese Gardens should be seen by all. 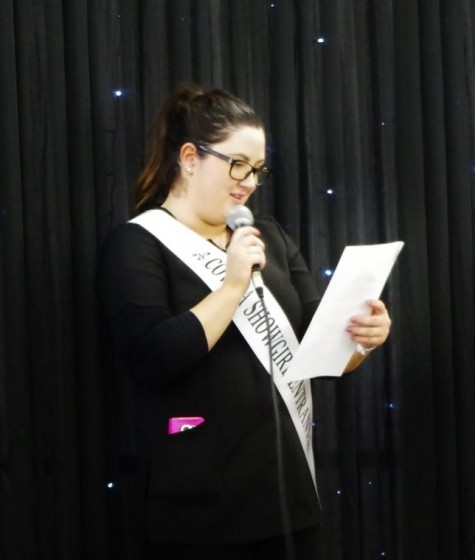 2016 Cowra Showgirl entrant Cody Hill reading my poem entered at the Show of which I couldn’t attend. Anyone who knows me well will tell you I’d even go to the opening of a rat trap, but on this esteemed occasion, sadly I’d have to miss it. There’s so much fun at a country show and I urge anyone to go along one day, especially if you have young children.

Cody did me proud as ‘The Street Lights are On … It’s Time to Go Home’ received Highly Commended and a big thank you to her for taking up the challenge. 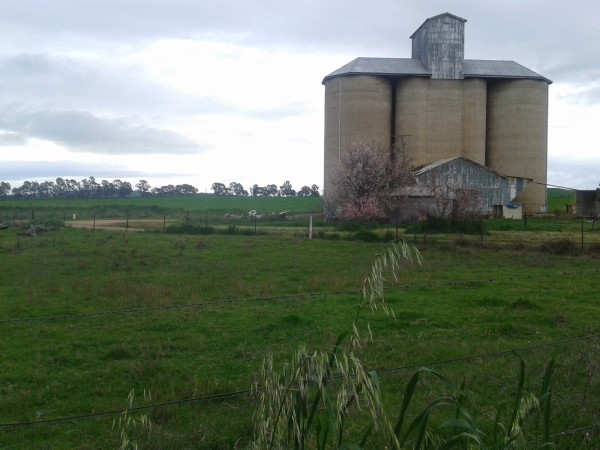 Coming home this year, we’ve been lucky enough to have some rain for sure, but it’s been raining none stop for months now … Just a bit more than out of the ordinary and it’s as green as could be. 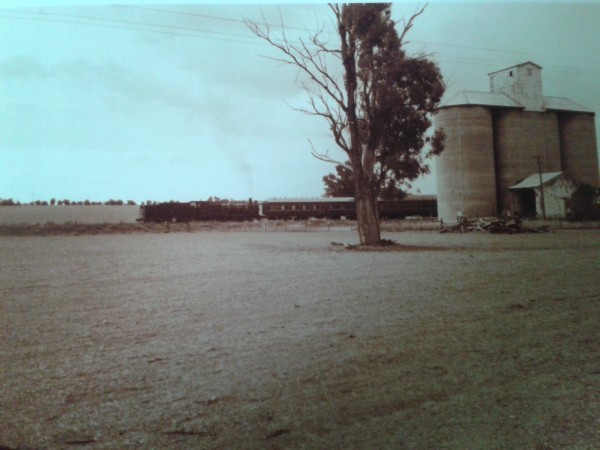 Same place and yes, we’ve had our share of drought too in the past as seen here in September, 2008.  It’s one of the best lambing regions in Australia and we’d prefer to see four distinctive seasons each year regardless of the freezing cold winters and boiling hot dry summers. 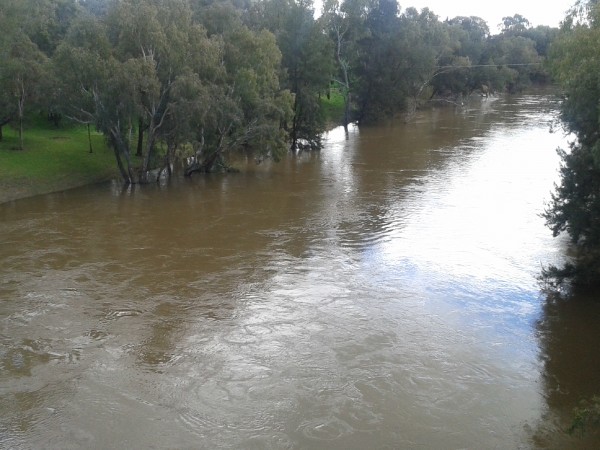 As I write this, the Lachlan River is now at dangerous levels after a week of rising waters from Wyangala Dam which is a further 30 minute drive away. As the dam is now over capacity, visitors are not able to enjoy activities such as water skiing.

Wyangala is well regarded by anglers for fishing such as silver and golden perch, catfish and murray cod are plentiful. 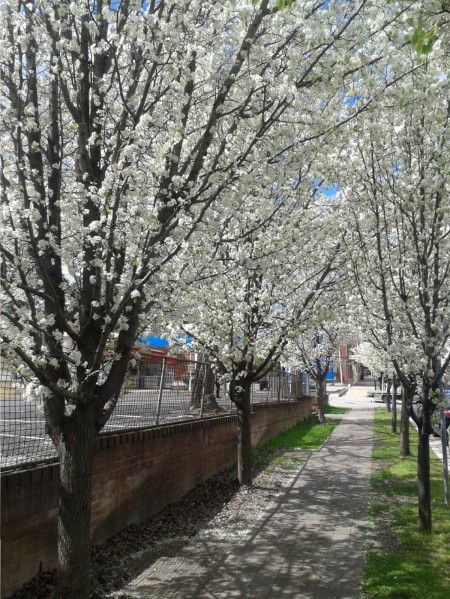 Now that spring has sprung, it’s just glorious and the blooms are out in full. 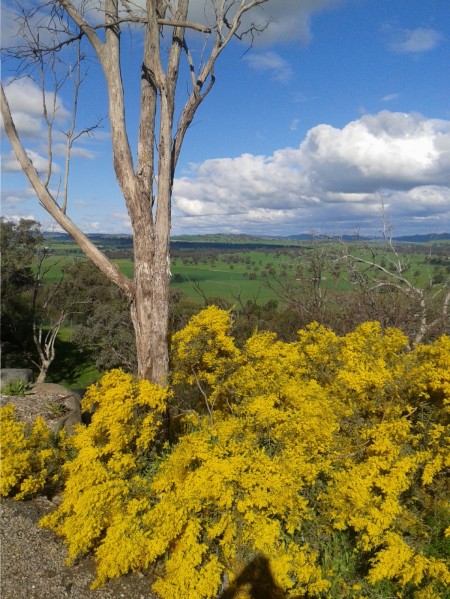 The district is renown for its farming with sheep and wheat being most prominent. It’s the commercial centre of a strong agricultural area in country NSW that covers horticulture, aquaculture and viticulture. The wine industry has grown to an international standard with Chardonnay taking out a number of awards, even after Aussies Cath and Kim’s belief is that ‘cardonnay is noice again’. 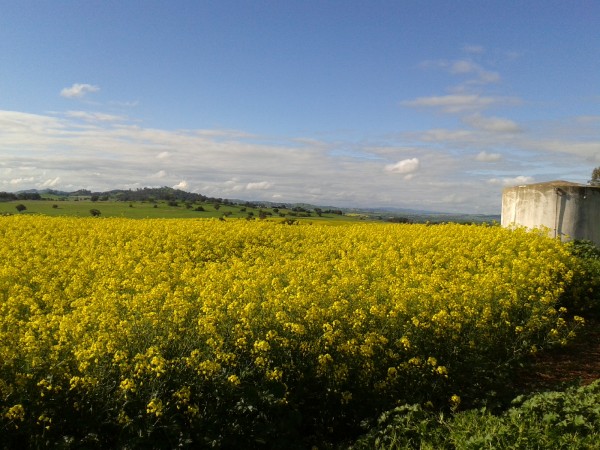 Canola – fields of gold can be seen from almost from every angle. 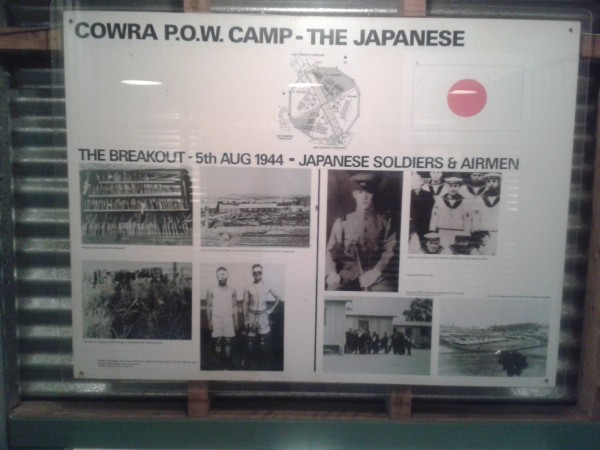 In 1944, more than 1,000 Japanese prisoners of war attempted to escape from a local internment camp. Cowra has since forged a remarkable friendship with Japan and you can see many tributes to this special relationship around town. 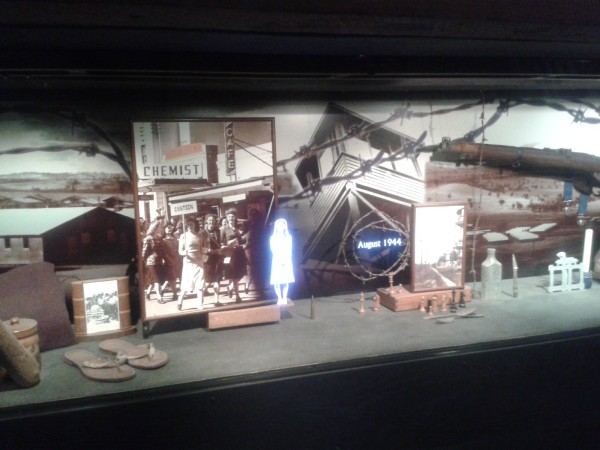 The hologram is a young woman who tells the story from a local perspective while interacting with original artefacts from the Camp. The presentation is aimed at raising awareness of the historical significance of Cowra in modern military history and in encouraging visitation to other local attractions and locations of historical importance. This will be found at the Visitor’s Information Centre across the bridge at the Rose Gardens. 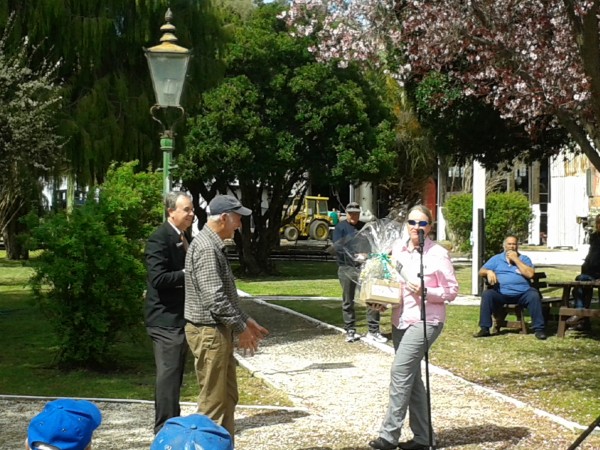 We had the pleasure of Andy from Transport Heritage NSW give an opening talk about the importance of maintaining and restoring the collection of engines, carriages and wagons which is paramount for their preservation with the view it’s part of our history. 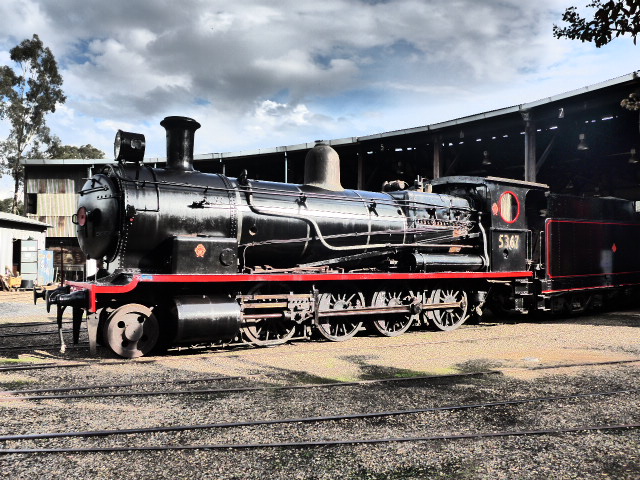 The magnificent locomotive #5367 taken out of the stable to show off just what a beauty she really is!

The railway lines around Cowra have been closed by the State Government, but the Lachlan Valley Railway (LVR) regularly conducts special train trips around the State, visiting many beautiful and historic towns and villages. For these trips the LVR uses restored heritage carriages with diesel and steam locomotives. 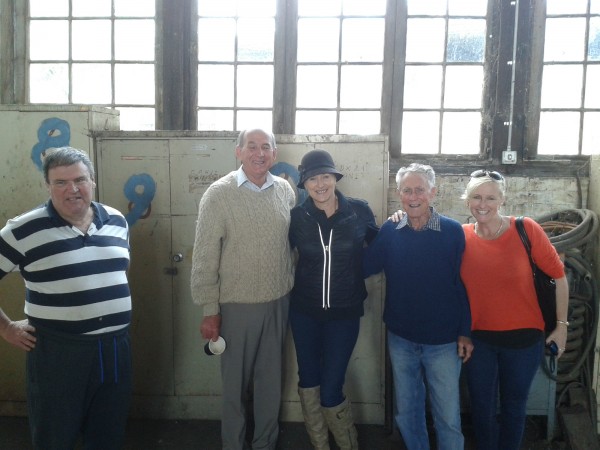 The locals are all volunteers and rely on donations and we’re here with an advocate of the Lachlan Valley Railway; from left the Mayor Mr Bill West, Vicki Anderson, Max Duffey – a staunch supporter (who worked with my Dad on the railway for many years along with Mr Jimmy Ryan) and his daughter Maryanne Duffey who drove up from Sydney for the presentation. Everyone’s working really hard at trying to have the lines opened up again in the region so everyone can enjoy what it was like to ride a steam train from a by gone era. 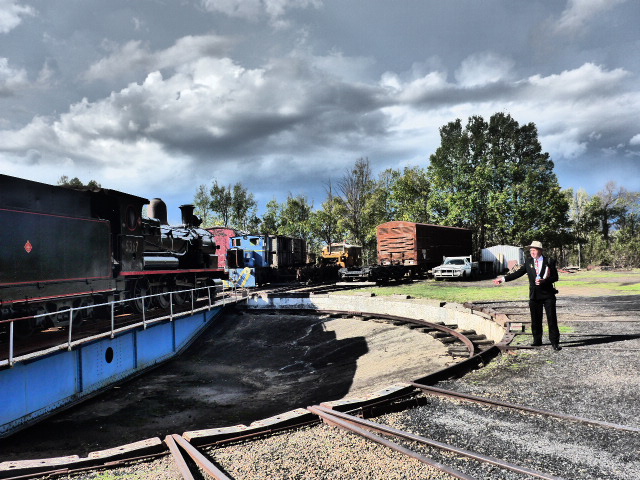 Lawrance Ryan from Cowra Tourism sometimes conducts tours of the Railway’s exhibits and here showing us the turntable on site. 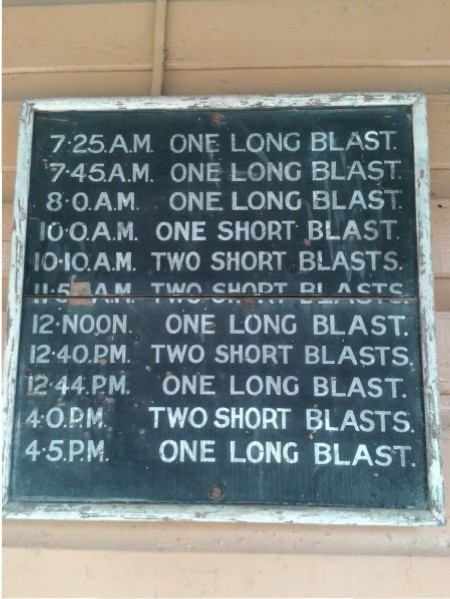 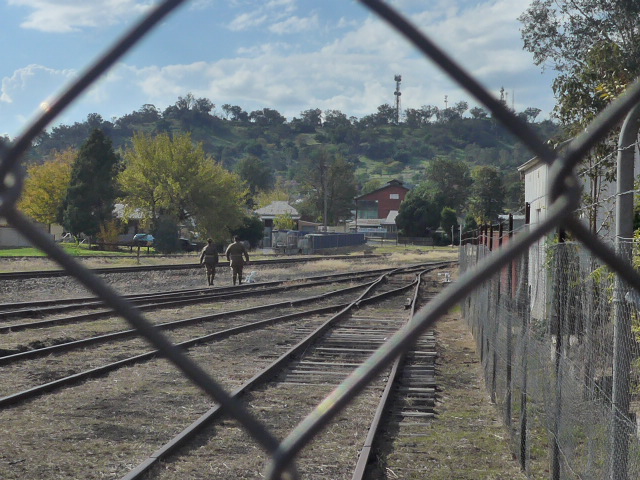 The history of Cowra is marked by stories of the military and migrants from World War II. Between 1940 and 1945 some 80,000 Australian troops received basic training at the Cowra facility. After the war the camp became home to between 17,000 to 19,000 immigrants who left war-ravaged Europe to make their home in Australia. 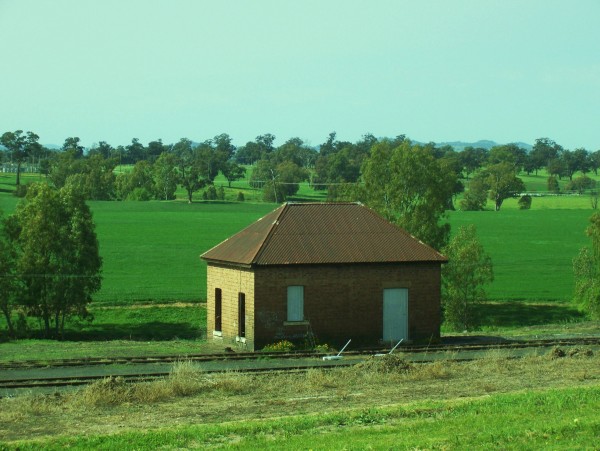 Looking out from the Cowra Railway Station, on the far left was the Migrant Camp which housed many of the post WWII immigrants from Europe including my own parents.

Nearly twice the current population of Cowra lived on the outskirts of the community between 1949 and 1955 as part of Cowra’s Migrant Camp.The lesser known of our ‘camps’, it is often confused with the POW camp – the site of the famous Cowra Breakout. 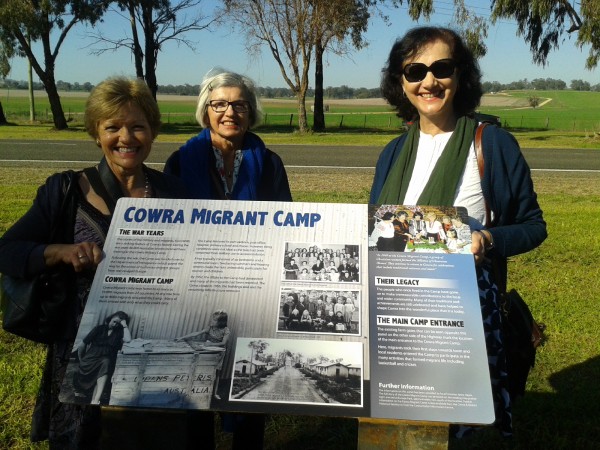 Earlier this year I had the privilege of taking part in the unveiling of a new plaque in memory of those who came as ‘New Australians’ to the region and start a new life. Here with me from left are delightful friends Tina and Janina Jaworski whose parents were also at this camp. 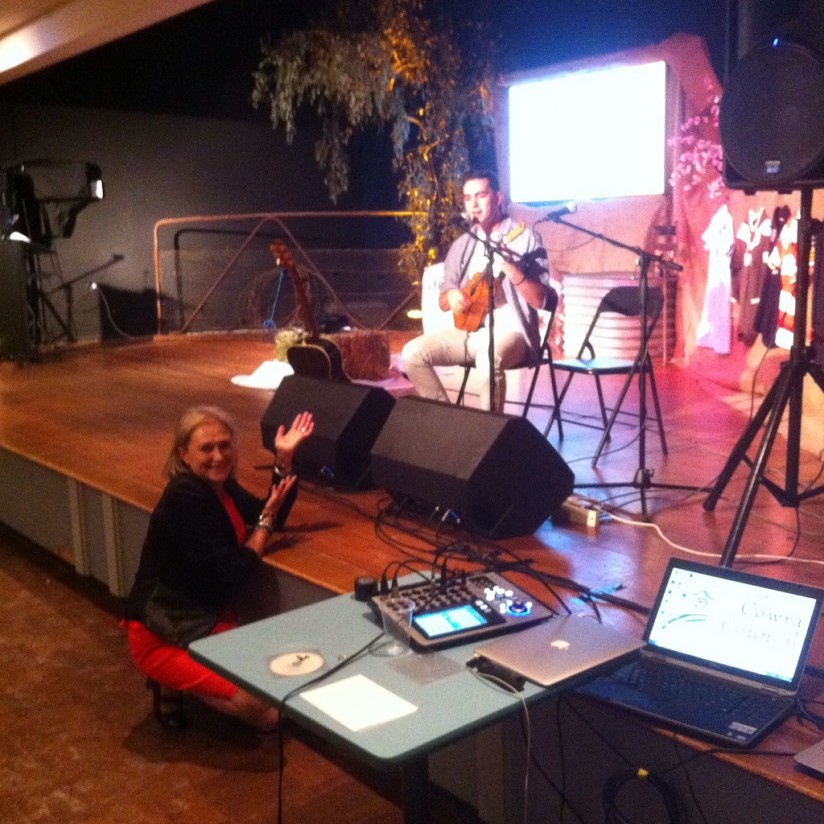 Anyway, there’s not anything quite like going out to the club and hearing an emerging young talent such as Jamie Hibberson who is on the way up, and with Vicki showing him off… Keep an eye on this young Cowra bloke!

Stay tuned for Part Two  of Back 2 Cowra …