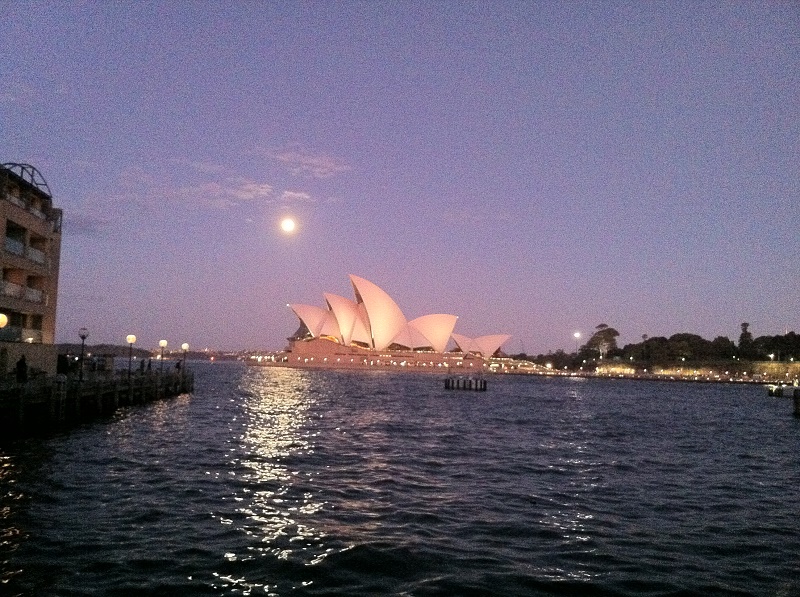 Bye for now Sydney. Although it’s a magical time of the year with Spring about to arrive, I’m also looking forward to visiting countries like Canada with the change of Autumn colours about to reveal its charm. 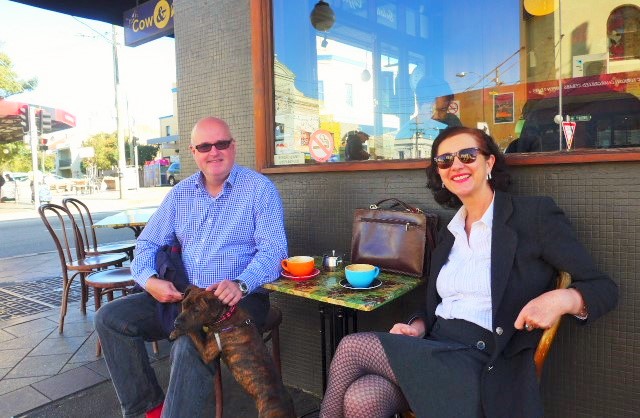 But before I head off, this last week meant catching up with friends. Nic and his new pooch Percy who is checking to see if there are any other doggies ‘in da hood’.

It doesn’t matter how many different shades of grey you wear in Enmore and Newtown, you’ll always feel at home here, with lots of dogs and their owners – everywhere. 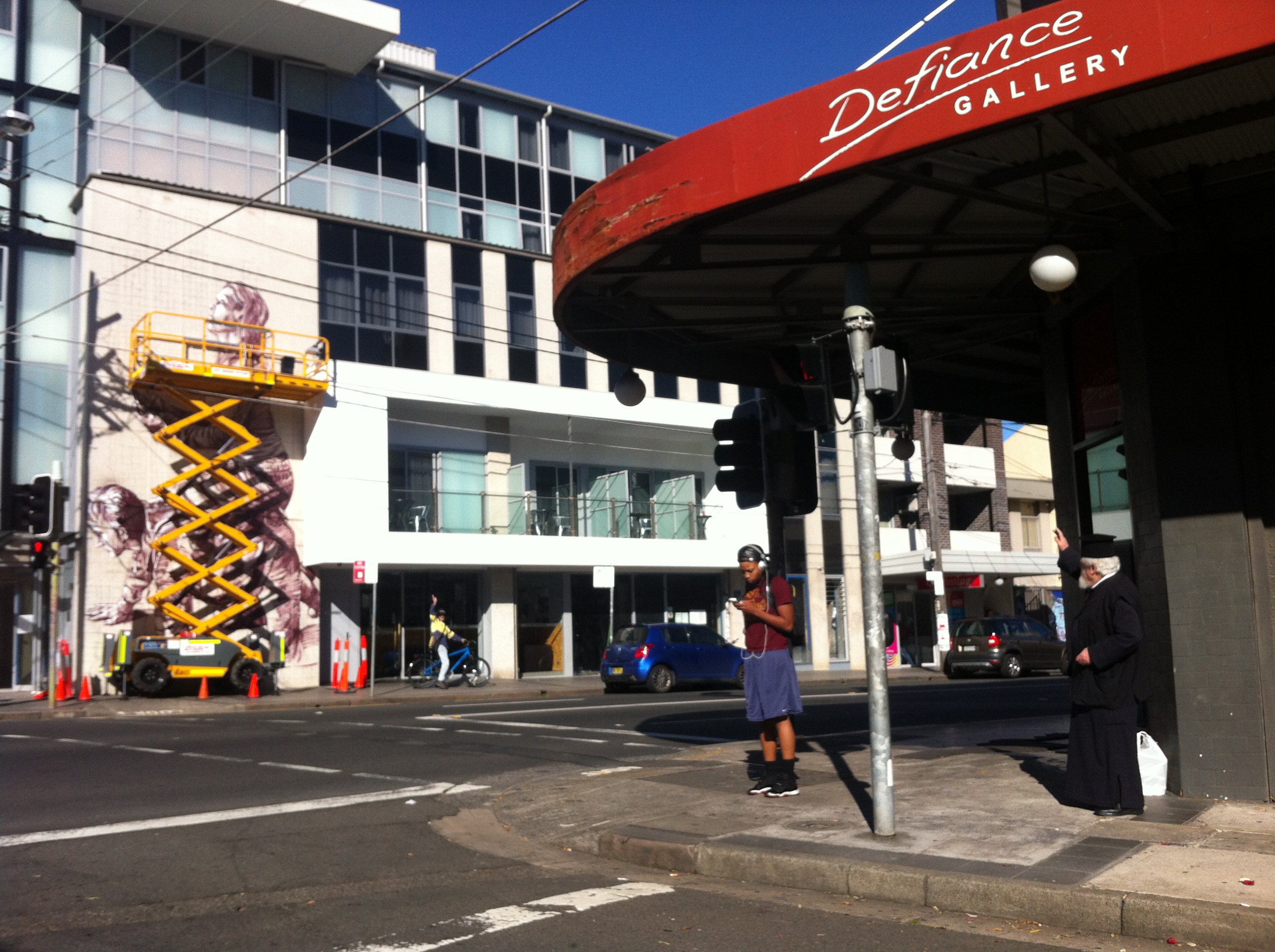 I’m having a walk around my neighbour  taking some shots – just in case I become homesick whilst away. However, there’s more exposure to graffiti artist’s work in the Inner West than anywhere else I’ve seen so far. This is the beginning of work a few weeks ago of the old Newtown RSL. 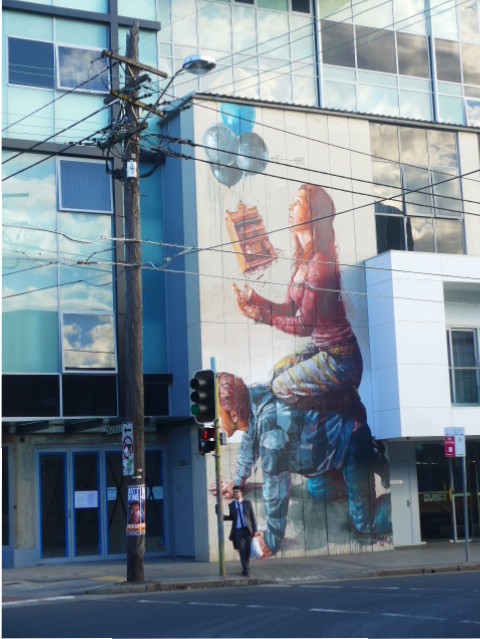 This is what it looks like today. Not too shabby ‘eh? Great to be in an area whereby it allows creative minds to be somewhat more productive rather than destructive. 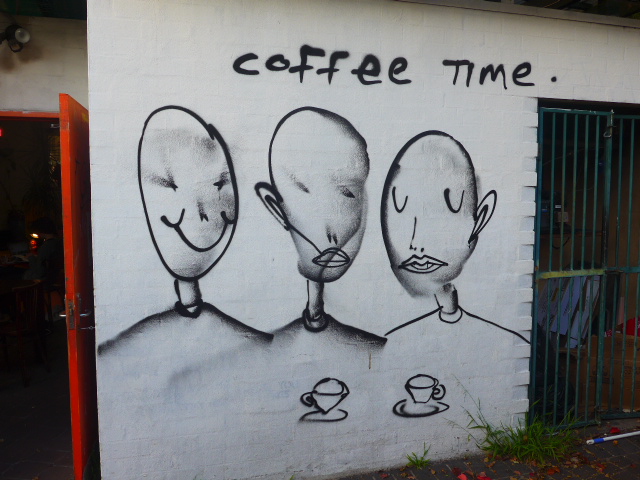 Just had a coffee but … I could have another? 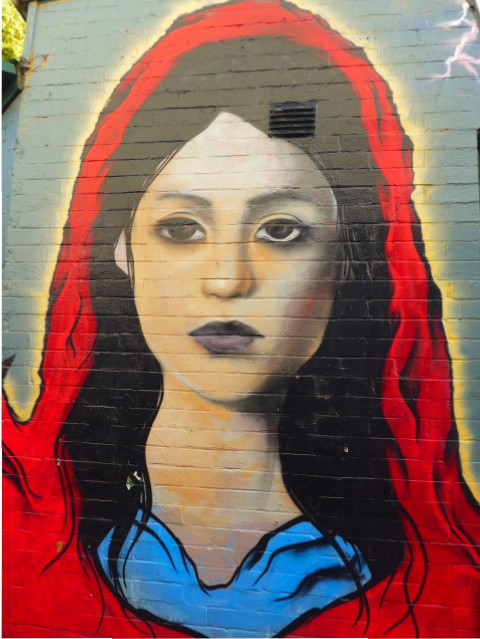 The local council here allows artists to partake in this activity which presents some really impressive artwork from those who are truly gifted. 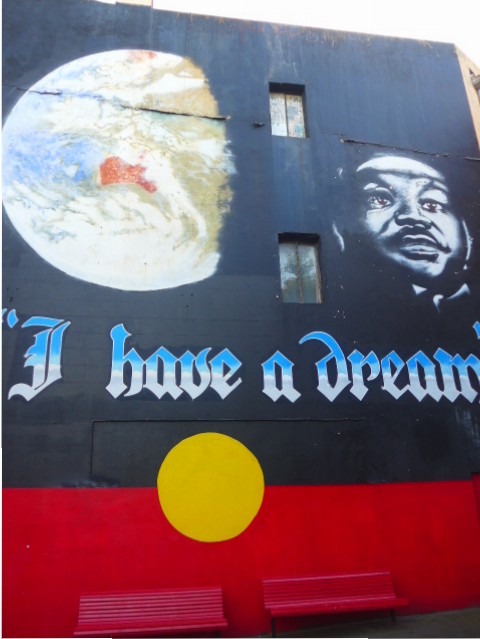 The “I Have a Dream” (Martin Luther King) mural, painted over two nights in August 1991, is the largest, most prominent and the longest-surviving of the many large format murals created around Newtown by the team known as Unmitigated Audacity Productions. The core members of which were New Zealand-born Canadian artist Andrew Aiken and his colleague Juilee Pryor. 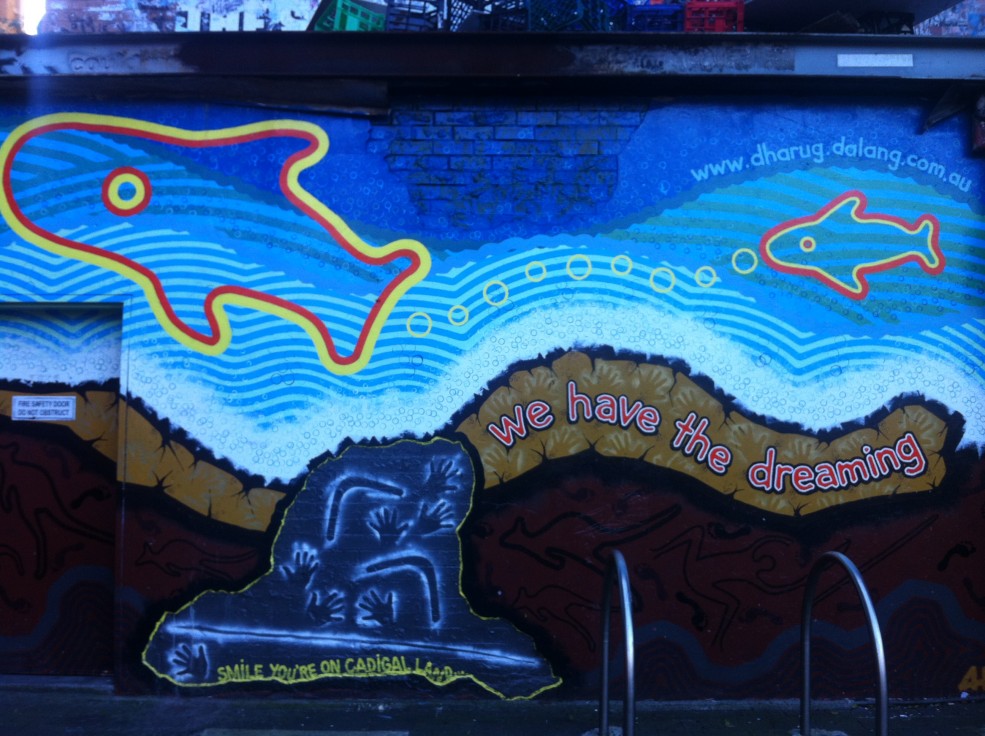 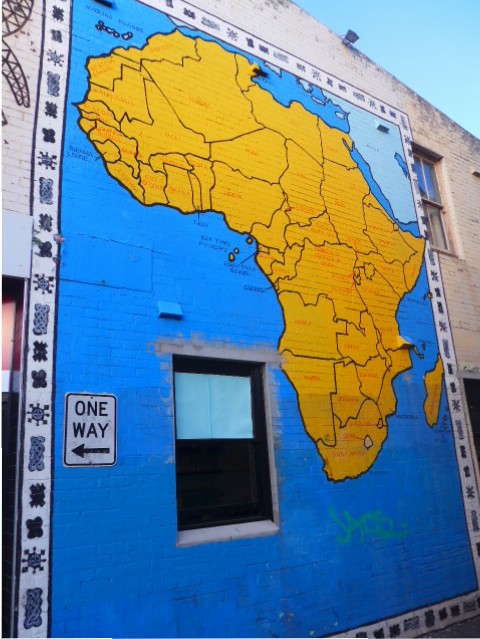 The “Africa” mural in King Street was originally painted in the early 1990s. The large work occupies the entire side wall of an African restaurant, located between the Newtown Mission and the Commonwealth Bank. The first version was reproduced from an old map printed by the Australian firm Chas. Scally & Co., most likely dating from the 1960s. 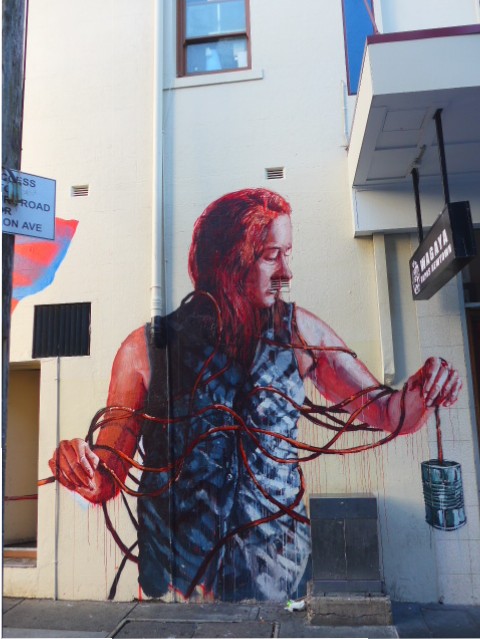 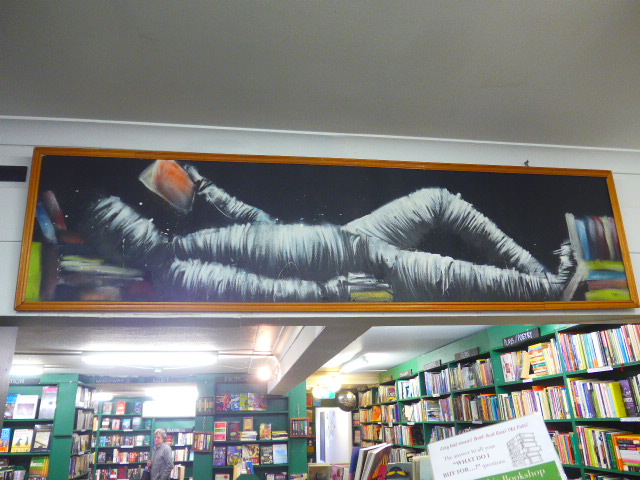 The signage up the road states “Better Read than Dead”. I totally agree. 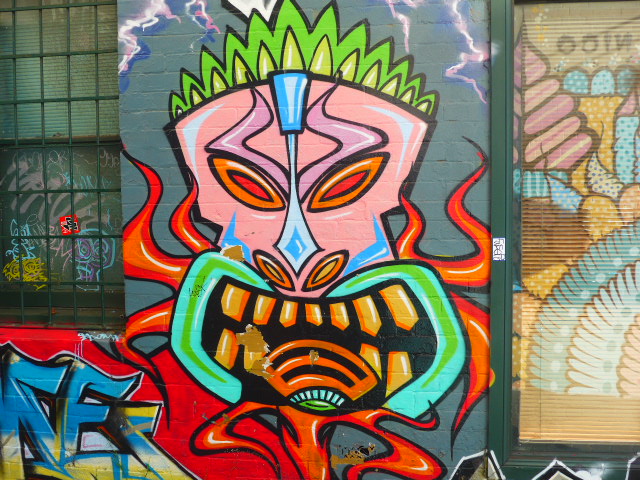 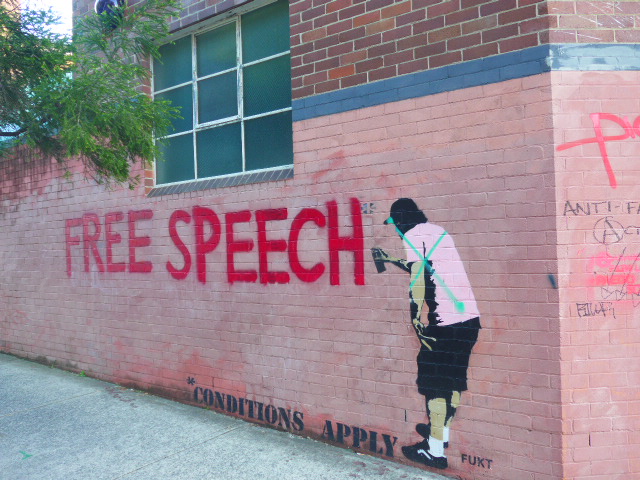 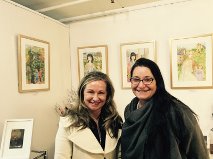 Catching up at another art scene with two special friends, Julie and Catherine who’ve been instrumental in their support of my blogging. Having read my travel yarns since the inception of the internet, at least now they (and you) can see what’s happening and be an armchair traveller too. 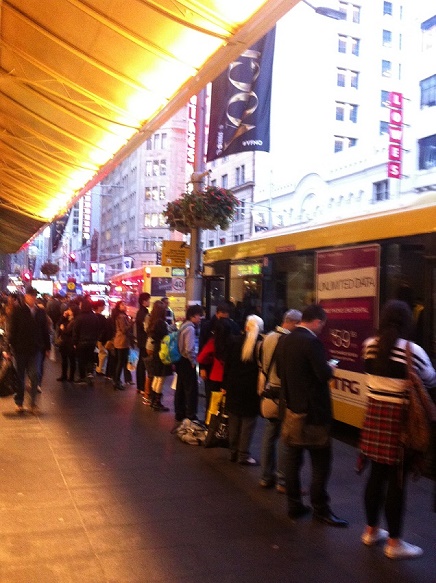 Quiz question: Are these people in Sydney going to the Inner West? Answer: No
How do I know? They’re all lined up nice and orderly for the bus. If you see this ever happen in my neighbourhood, you might think a space ship has landed and everyone’s been zapped. 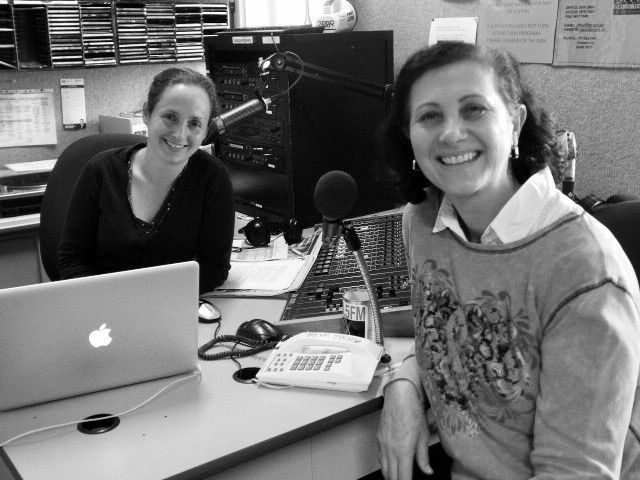 Chatting with Lia Crowley at 2RRR about destinations, hints and general travel advice on breakfast radio last week. I’ll be back on air after a two-month blogging trip with NZ up first and heading onto Anaheim, followed by the world-famous Rocky Mountaineer rail journey. And, if you think I can’t seem to take in enough rail travel, continuing across Canada towards the Eastern Seaboard with Via Rail.

NYC will be the last part of the itinerary within the USA. Stay tuned and you can follow me as a travel agent with tips and tricks for travelling with my Facebook page Travel Gracefully.