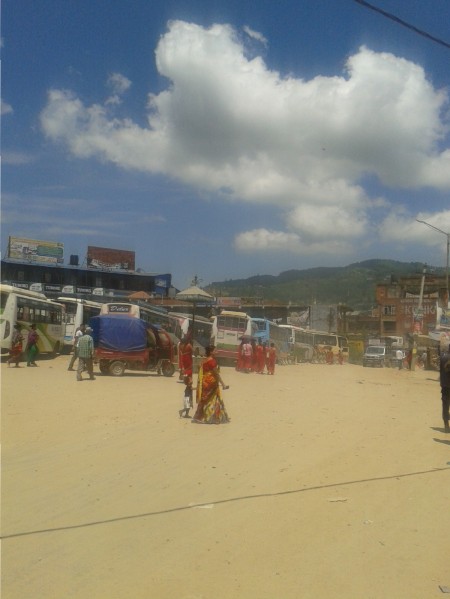 When you first arrive in Panauti you might think it’s one big dust bowl, but then all of a sudden the air settles, we heard women singing – then offering us floral necklaces and dressed in beautiful exquisite saris; they had arrived in a timely manner to meet us and had welcomed our group whole heartedly.

The town is approximately 32 kms southeast of Kathmandu. Panauti is quaint and a truly interesting destination to visit for those seeking a quieter alternative. It feels as if it’d been left exactly the way the founders had built it in the 13th century. It’s a real gem and one of the oldest places in Nepal which is steeped in culture and tradition. 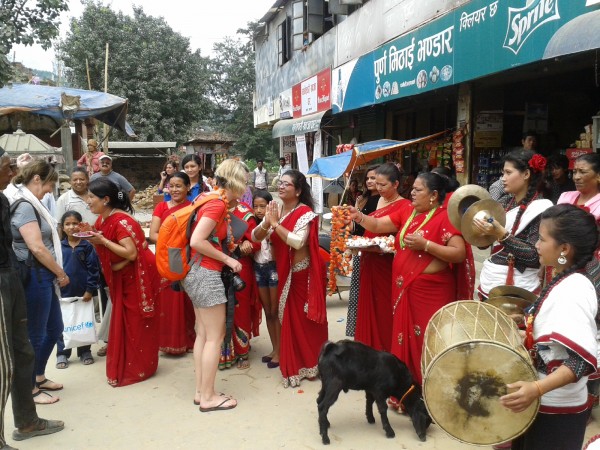 Lisa being greeted by one of the organisers of our Community Homestay which is run by Women for the Women. Currently there are 16 ladies involved in the Homestay Project which empower them to become involved in tourism and hospitality which in turn allows them to give travellers an authentic and interactive experience with a local family. 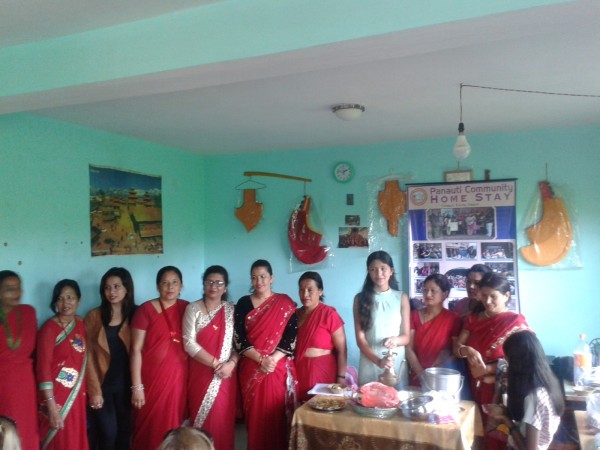 At the Community Centre we’re offered light refreshments before being taken to our respective homes for a two-night stay and experience how a Nepalese family goes about their daily lives. 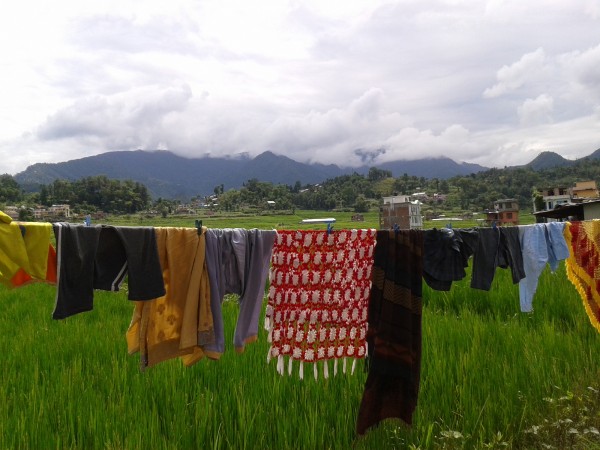 And if it means helping out with some washing – well, better throw some of mine in too! 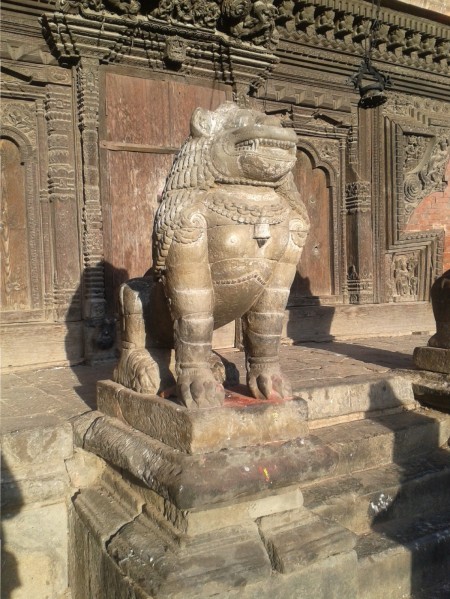 And as luck would have it, our host family was located near some of the oldest temples and monuments, not just in Panauti, but all of Nepal. 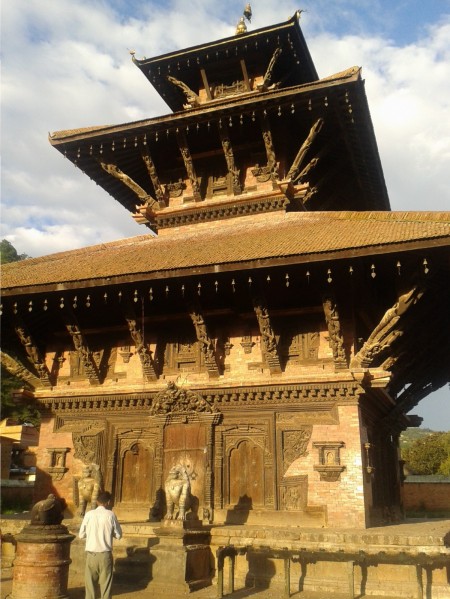 There are some fabulous ancient temples which have stood the test of time, partly because of Panauti’s legendary resistance to earthquakes. This certainly held true during the 2015 earthquake, when the town escaped with minor ‘abrasions’. 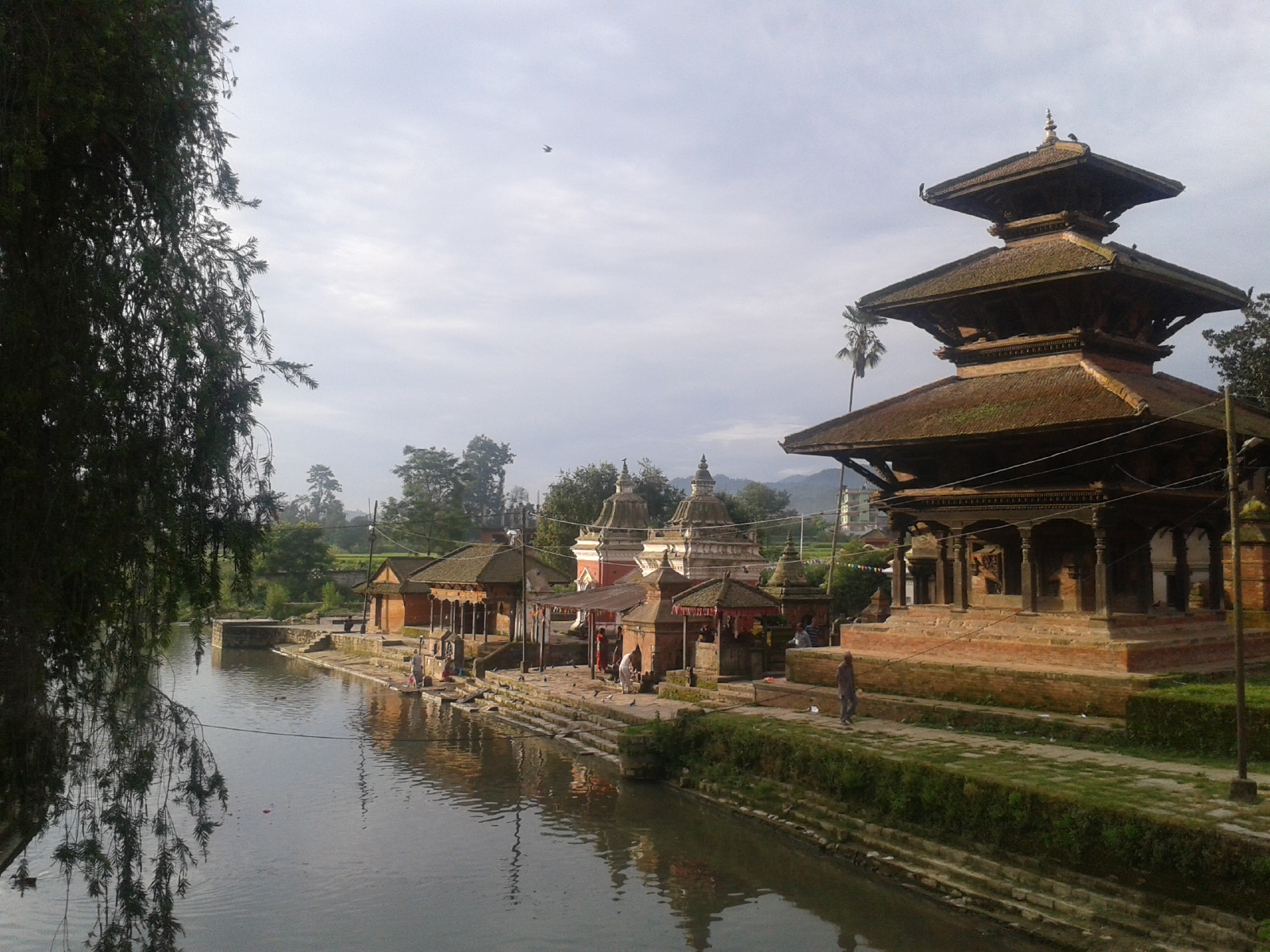 Along the river is the most concentrated number of temples to visit. Panauti, consists of a variety of Buddhist and Hindu religious edifices and is considered to be one of the area’s most important medieval sites. 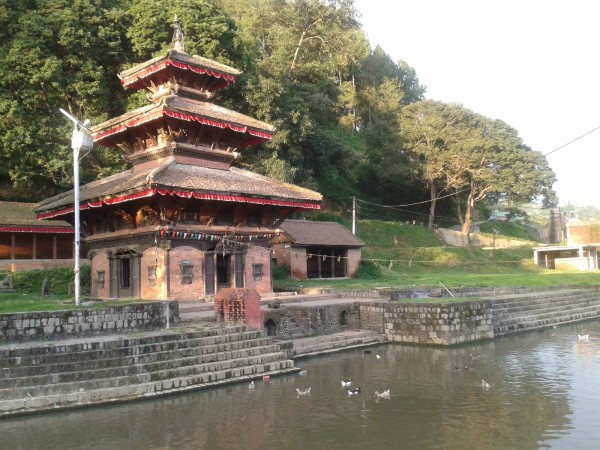 Triveni Ghat is located at the confluence of the Punyamata Khola (river) and the Lilawati (or Roshi) Khola. A third river, the invisible Padmabati river is said to join these two. 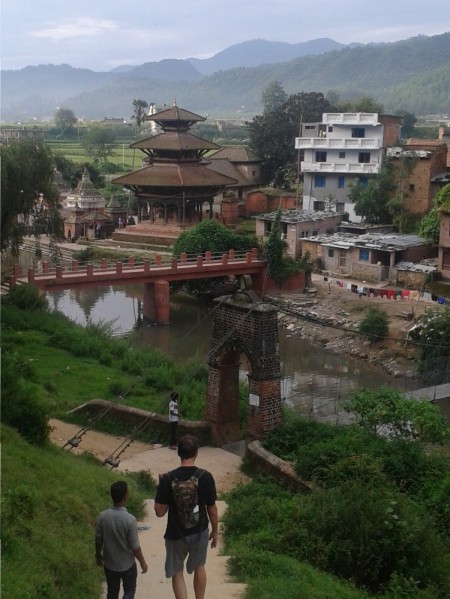 A 15-minute climb north-east takes you to Gorakhnath Hill (2,000 ft) from where one absorbs an overall view of the fish-shaped town as well as panoramic views of the region. 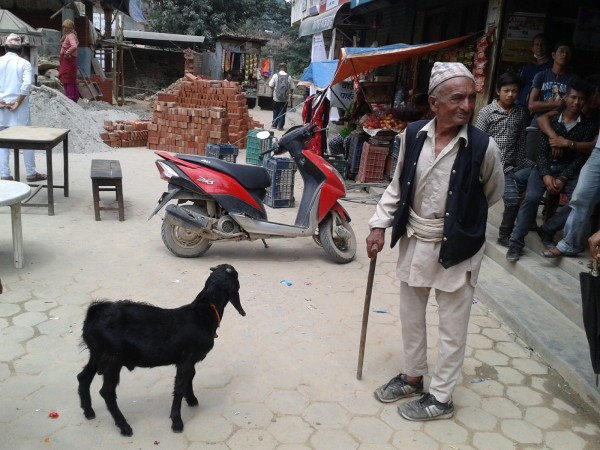 There’s no shortage of goats hanging around and I’m glad, they’re so naughty and always make me laugh, except when they chew on something they’re not suppose to! 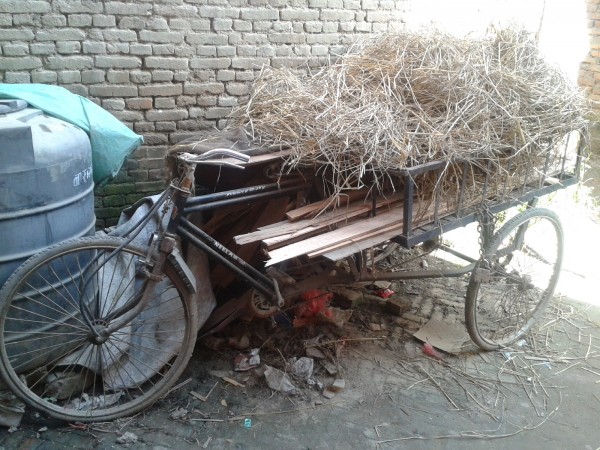 Another means of transport and carriage of goods. 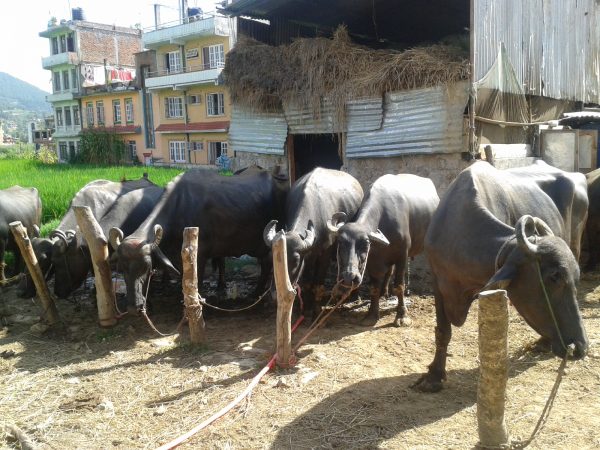 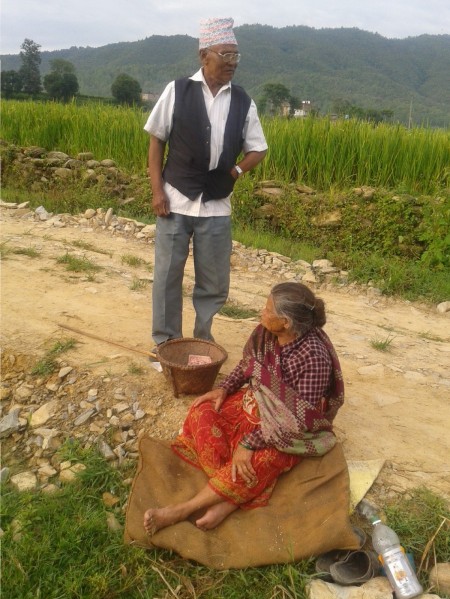 Walking around the township and a simple nod acknowledges a friendliness from the locals –  it’s time for a break. 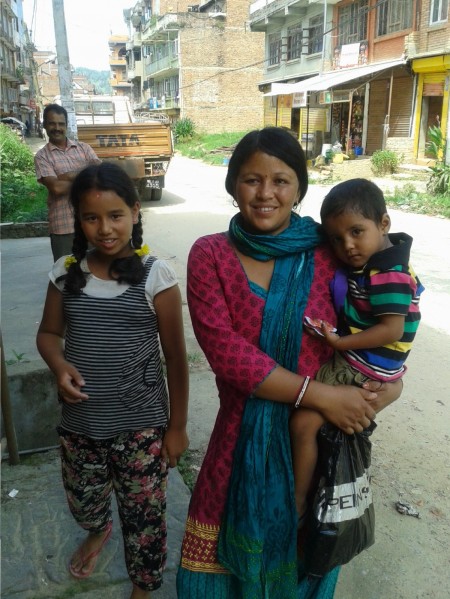 So what happens when you find a cool spot to sit down and watch the world go by? You meet a small girl and another Mum who were happy to chat and have their photo taken. And just as you think you’re going to rest up after climbing the ‘huge’ hill earlier in the morning – then just hang around whilst my group have gone off trekking, I gladly ended up spending the rest of the day with my new-found friends showing me another view of the town’s fascinating aspects. 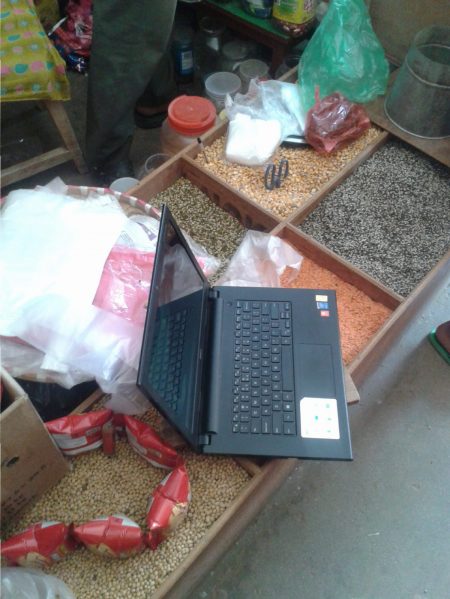 But firstly to check if the outside world still exists … I mean really? How many westerners would offer you their computer to try and check your emails over at their shop? Apparently there are designated times for the power to come on and then go off with a schedule being made available. 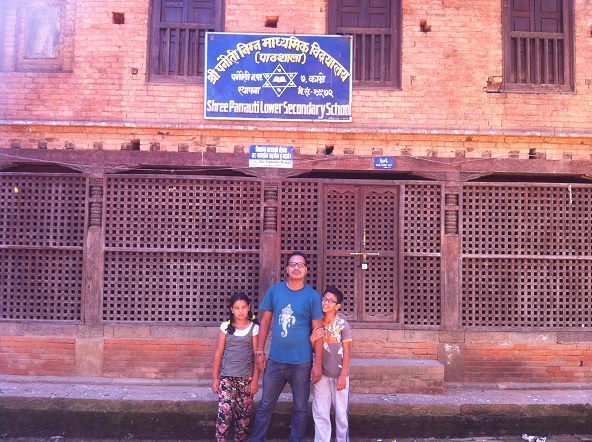 Here’s where we meet Rajan who’s a teacher at the Shree Panuati Lower Secondary School. Being Saturday they aren’t at school, but it’s their only day off in the week and then it’s back to the business of learning on Sunday and work for others. 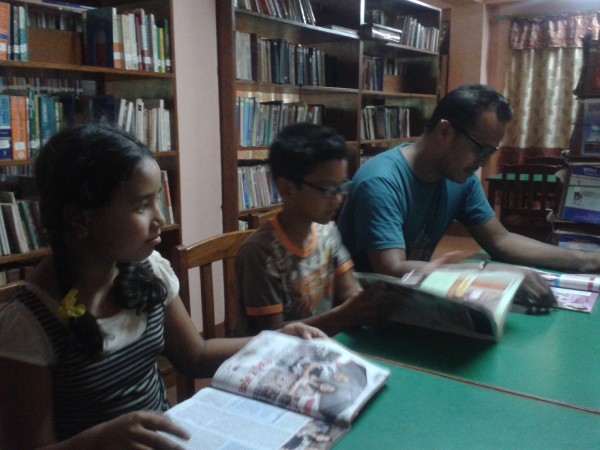 Rajan at the Gyan Bikas Community Library with his younger siblings; it’s considered the only library in the world located within a World Heritage site. I’d been shown around the library and found it quite impressive as there’s more than 100 people (on average) who visit the library each day. The facilities are a place of interest for children, women, youth and adults for learning and sharing. There’s a dedicated Women’s section to those who are pregnant in giving them maternal advice and support. 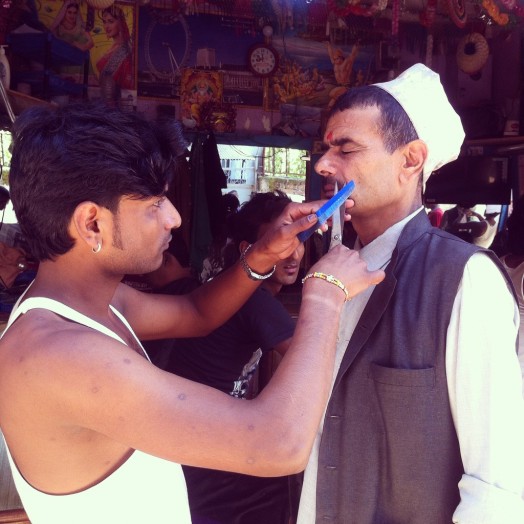 And at the end of the day, it was interesting to watch at the Barber’s shop people having a haircut and trim up which was probably around the equivalent of A0.50 cents …