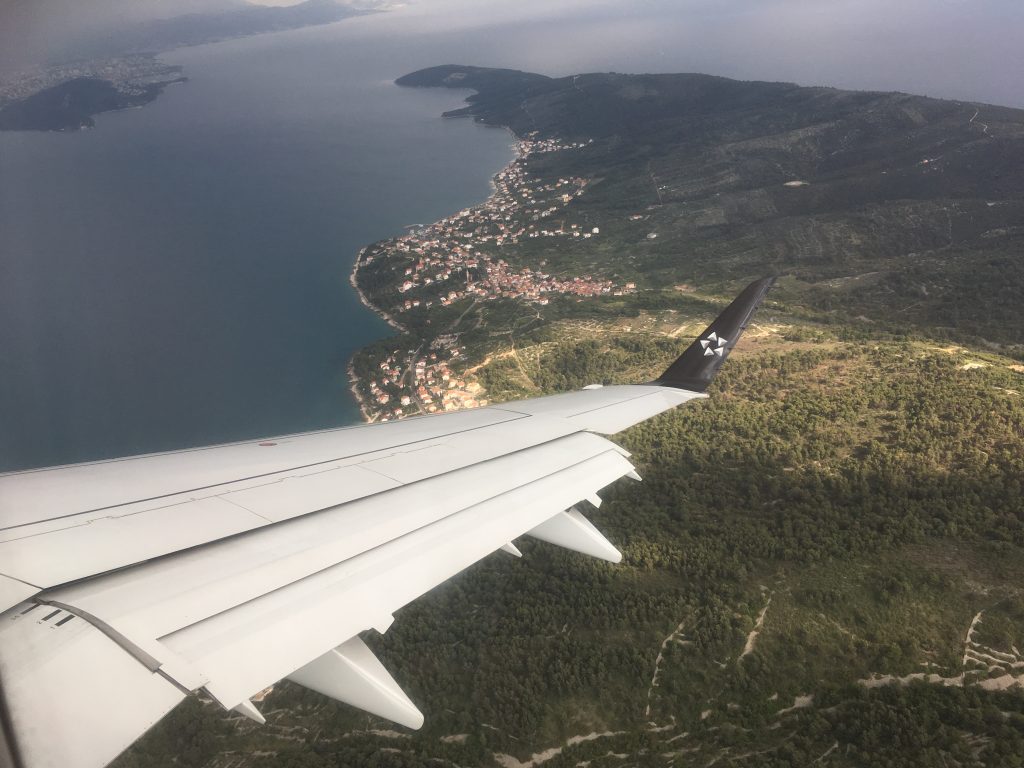 When you fly into Split in Croatia and you see the coastline from above, you instantly know the bucket-list cruise you’ve been wanting to do is about to become a reality. Resnik Airport being the international airport serves the city of Split 19 km away on the west side of Kaštela Bay.

Travelling by bus from the airport to the city centre costs about 40 Kunas (approximately A$8.50 one way per adult). It’s easy enough as the buses wait outside to the left after exiting the airport doors. Taxis are about 250 Kuna and private transfers are also available for about 35-45 Euro. Ensure you ask for the right bus in the direction you’re wanting to travel. The airport bus, (if that’s your choice) will take you directly to the main bus station in Split – which is next to the train station and right there at the port. Perfect if the first thing you intend to do is catch a ferry or bus to somewhere else.

It’s a small facility and the growing number of visitors each year has the authorities on notice to consider establishing a larger and more modern airport. 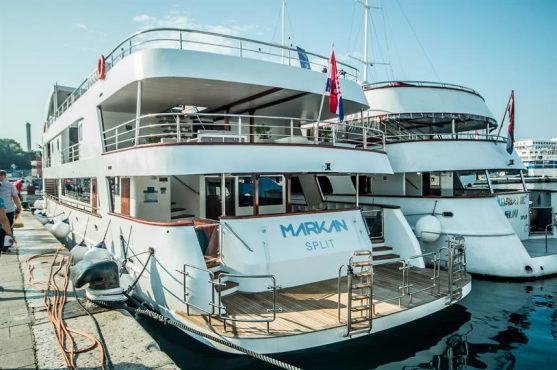 Now, meet my small luxury ship – MV Markan of which I’m going to share my trip over the next couple blog posts of this unforgettable voyage from Split to Dubrovnik – via some of the most scenic areas along the Dalmatian coastline. MV Markan was built in 2018 and is so shiny and new!

Various categories of small vessels including the MV Markan are bookable with Katarina Lines which happen to be the most well-known operator in Croatia. They can also organise land tours to coincide with the cruise options available. 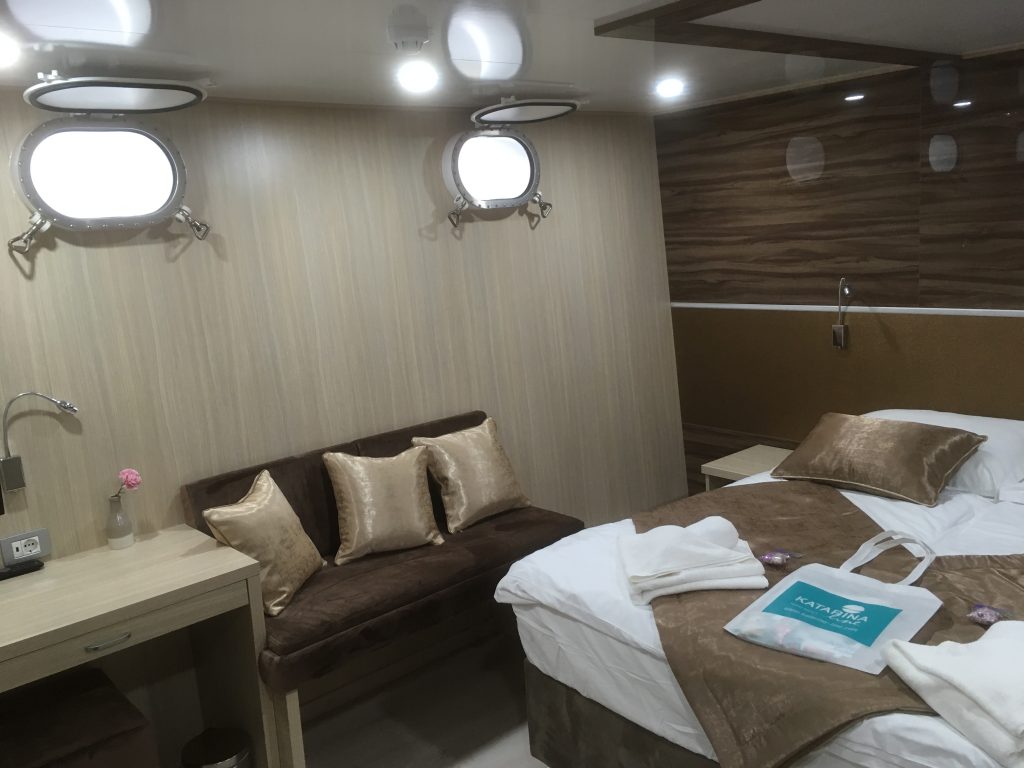 Looking quite swish and comfy with a small number of cabins making the journey so much more intimate with other guests – knowing them much better than say an ocean liner. MV Marken has a maximum of 19 guests onboard whereby the service on offer is second to none.

Wifi being available throughout the ship makes it easy to connect with others, allowing them to be envious of your every port call along the way. Depending on the areas once out to sea, it may be a little touch and go on occasion. But that’s fine with me when you are wanting to disconnect for a while and simply enjoy the facilities, food and not to mention the views!

But, before we all head off for a marvellous expedition, it’s time to explore some more of Split with a city tour and a local guide – it’s always a must-do activity. Learning and understanding the history and architecture of this picturesque small city will have you surprised with just how much history is attached to its resume. 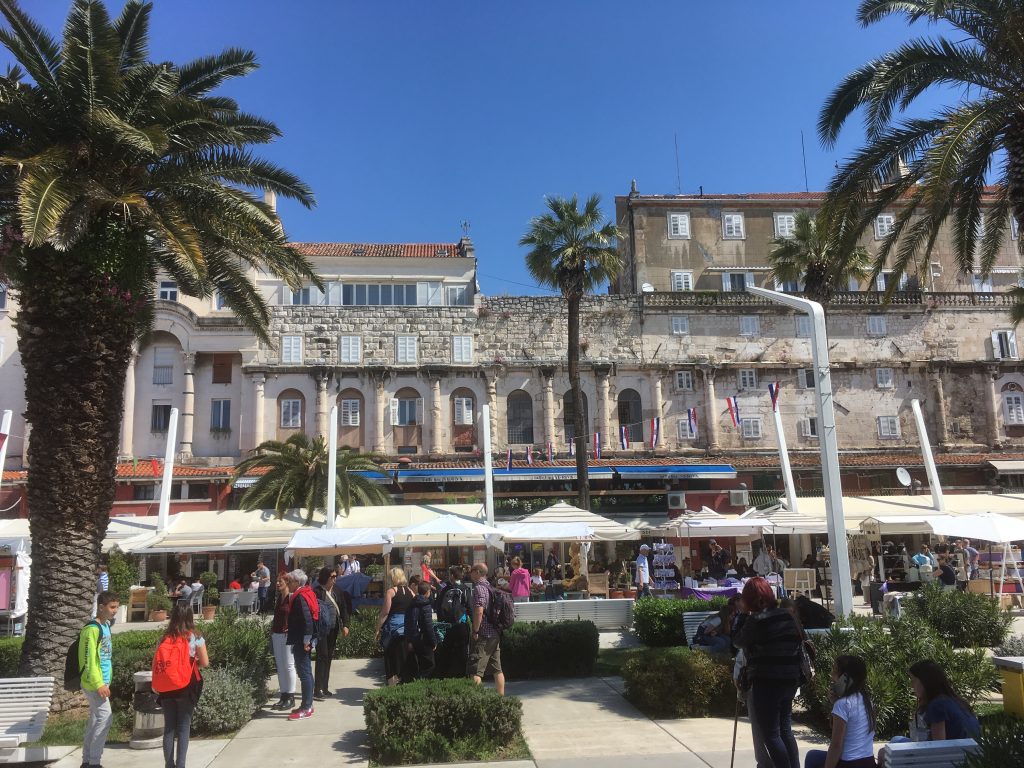 The promenade of Split is the main focal point when it comes to visitors wanting a sea view and seeking culinary delights to enhance that experience.

This view from the main thoroughfare and foreshore, the  main facade of the Palace’s intended use as the retirement residence of Diocletian, was built at the turn of the fourth century AD. Today it forms about half the old town and there’s numerous small boutique shops offering all kinds of goodies.

Anyway, you don’t always have to sit with hundreds of other tourists along the seaside, you can sometimes find a quaint family-owned business such as Kuharica (with their own Cook Book) who make traditional cuisine such as seafood and gnocchi. Here’s Lucy (Manager) and I inside the walls of the ‘palace’ and away from the hustle and bustle of the main-stream areas.

So many of the younger people particularly now in hospitality and tourism in Croatia speak superb fluent English … and  I’m truly grateful to them for their efforts. Lovely experiences such as being able to have a coffee here and a lively chat with Lucy divulging to me, what makes Split tick along as a destination. 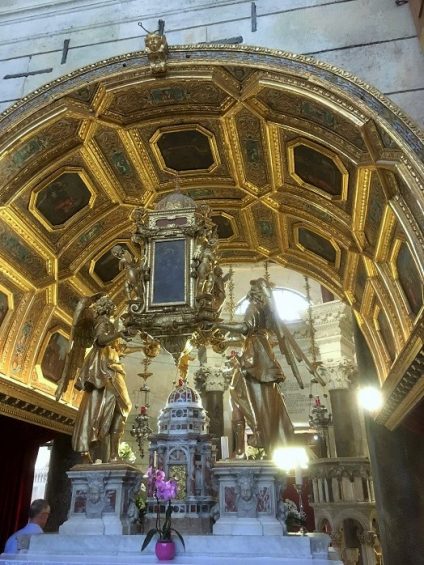 Among the European cathedrals this one in Split finds its seat in the oldest building – the Mausoleum of the Roman Emperor Diocletian. Inside the cathedral, at the end of the second millennium, the history reconciles ancient pagan Christian Medieval and modern heritage. Mausoleum of the Emperor – persecutor of Christians becomes a cathedral in the 7th century where altars with relics of St Domnius and St Anastasius, martyrs were executed in the nearby Solin take an honorary place.

The Cathedral today is primarily a place of liturgy, with a millennium long continuity, best reflected in the Sunday mass and the renewed splendor of the procession on the St Domnius’s day – the day of Split’s patron saint.
Source: Split Tourism Board. 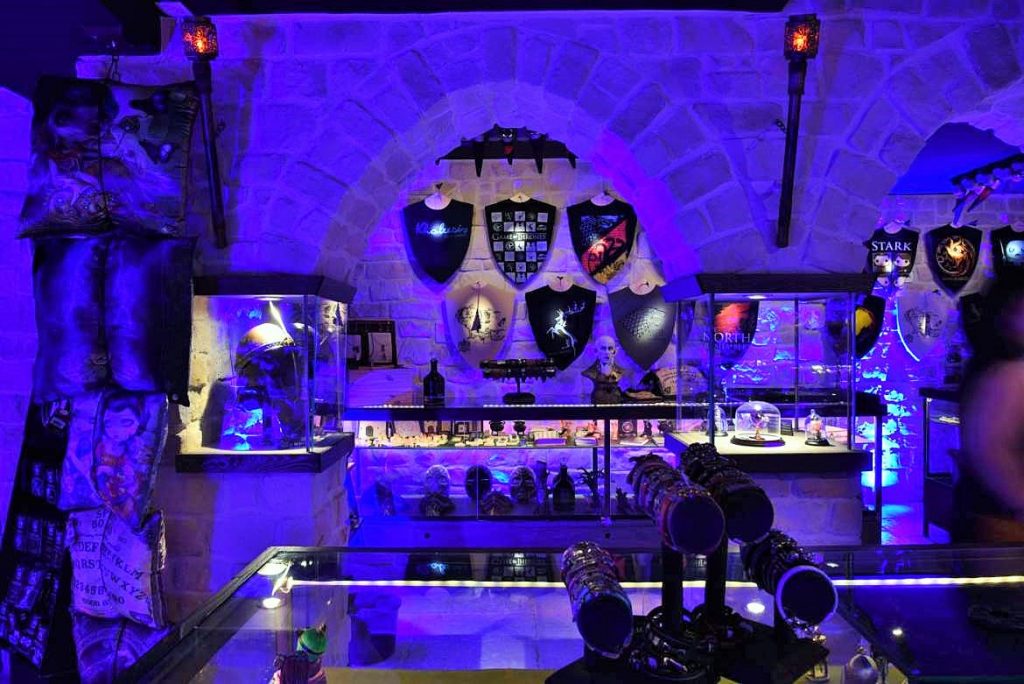 Anyway, there’s another ‘religion’ happening in Croatia. Game of Thrones has just opened its new store in Split for all those cult followers to make haste and grab some souvenirs.

Dubrovnik was the main filming location in Croatia for the King’s Landing, a fictional city in Game of Thrones, the famous television series based on the series of fantasy novels “A Song of Ice and Fire” and distributed by HBO. 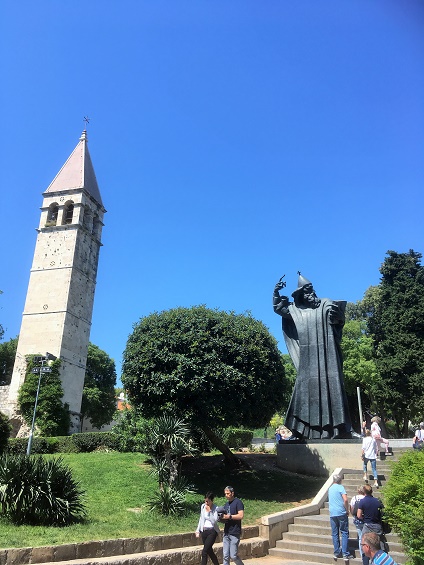 At one of the entrances to the Palace, don’t miss testing your luck of making your wishes come true by touching the big toe of the grandiose statue of the Gregory of Nin, the work of the great Croatian sculptor Ivan Meštrović. 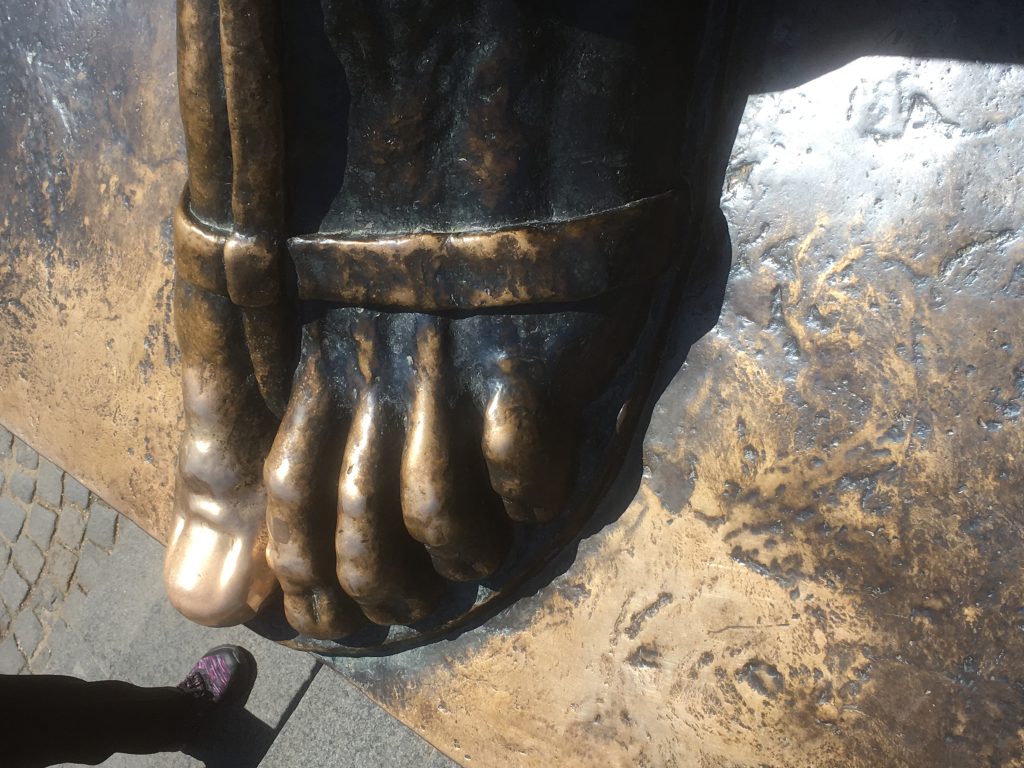 The big toe of this towering monument to the Croatian national hero has been worn down from years of superstitious rubbing I’m told. Umm I assumed it was good luck. 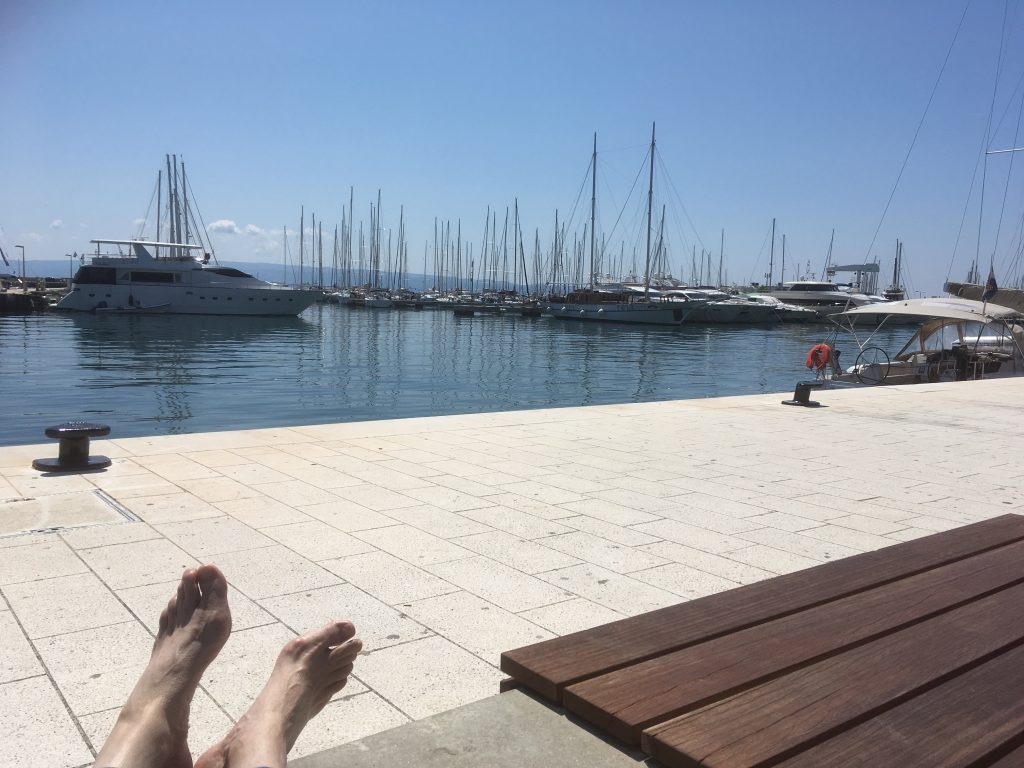 Anyway, I’m just hanging around in the warmth of the beaut sunlight on the far side of the promenade waiting for our departure on MV Markan later on. I didn’t have anyone rubbing my toes for luck!

Next blog post, cruising from Split to Hvar, part two.