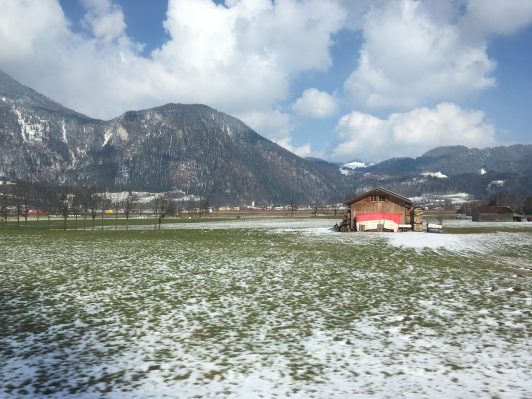 Travelling from Vienna Hauptbanhof to St Anton am Arlberg on a fast train will take approximately six hours. More likely than not, a change of train will be required at one of the major cities enroute with minimal connection times. Most times a few paces across the platform and onto a waiting train is all it takes.

So I’m on my way … Have you ever wanted to visit a destination which is the same as your own surname – as an example? Well, I have now and Lech was on my to-do list for quite some time … And happy to say, Lech am Arlberg being quite prestigious, is best known particularly for its skiing, toboggan runs and mountain hiking trails; making it one of the most visited regions in Austria as it caters well for adults and families alike.

Other activities may include game watching, tandem paragliding and snow shoeing whereby you can discover there’s much more other than skiing. 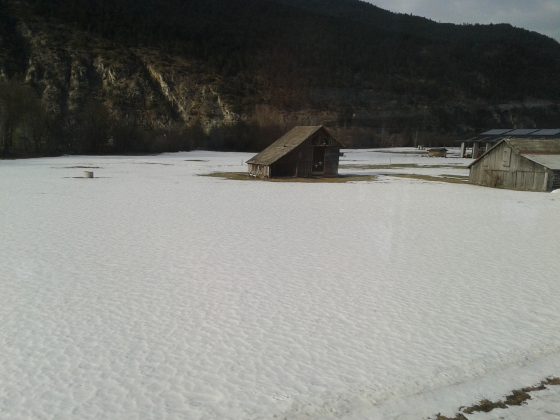 Obviously there’s snow still hanging on as winter transitions into spring time. Lovely small wooden huts can be seen along the way piercing their way through and trying to make a more respectable appearance. 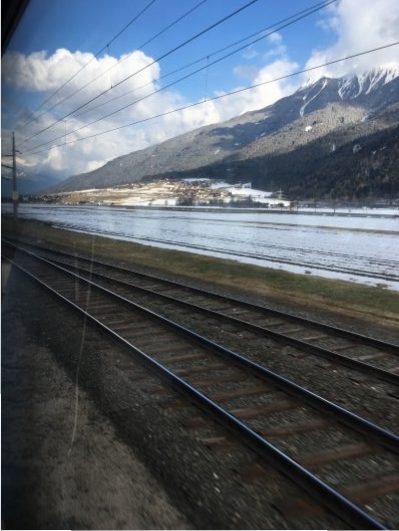 Nearing St Anton’s station towards the end of the day’s travelling, it’s comforting to know there are transport options available. Taxis are readily available at a cost of around 58 Euro or you can take a warm public bus which have regular services for around four Euro one way, per adult. The buses are about 200 metres from the train station. 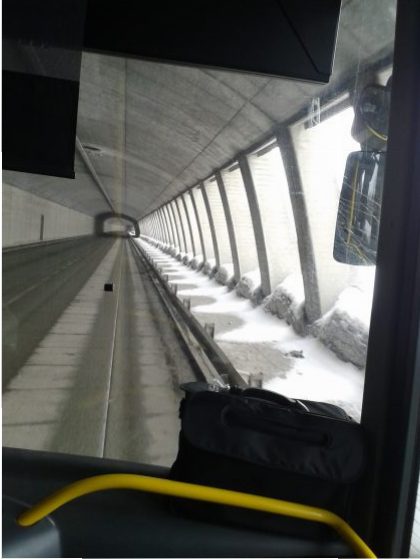 The public bus takes around 30 to 40 minutes and will go directly to the main part of Lech am Arlberg at the Post Office stop. From there taxis again are handy and many hotels are centrally located around the main street. 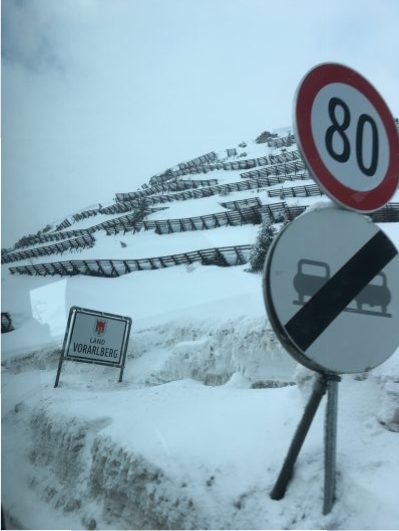 Umm – think there’s been some serious snow being held up! 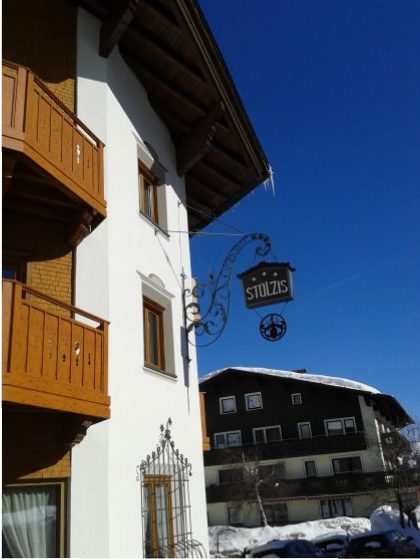 My stay on this occasion is with the very friendly family-owned Stulzis Hotel; lovely, warm and close to everything. They can easily provide guests with a ski storage room, ski/lift passes and free self parking. Supermarkets and cafes can be found close by. 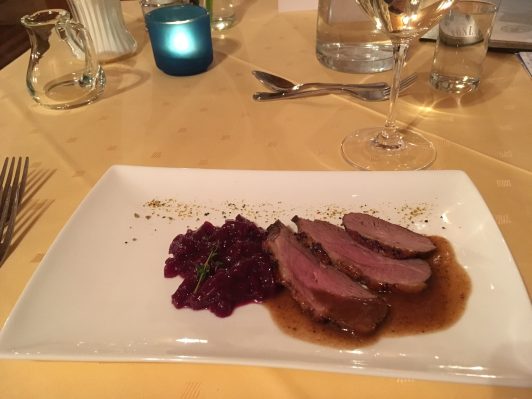 Also available is half board which includes a traditional breakfast and dinner (evening meal is a different set menu each night). Here pictured and relishing my starter of thinly sliced duck with a portion of seasoned red cabbage.

Food and drink in Austrian ski resorts apparently is cheap compared to Switzerland, comparable with France, but maybe not as cheap as Italy. 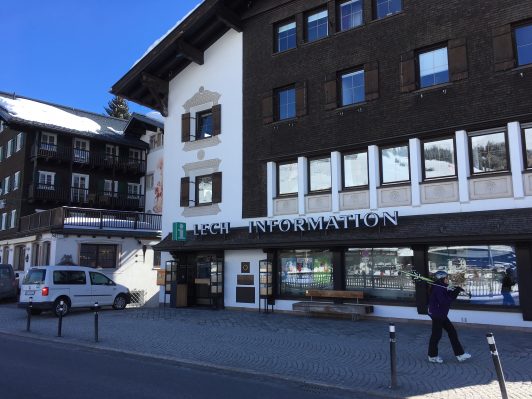 As Lech am Arlberg is a skier’s dream destination in Austria, the best place to head to first up is the Lech Tourism office in the centre of town. There’s a myriad of activities you can partake in and they offer you really helpful information with maps which show you all around the region. Walking tracks are ideal for someone like myself who loves the look of snow, but is not a skier. 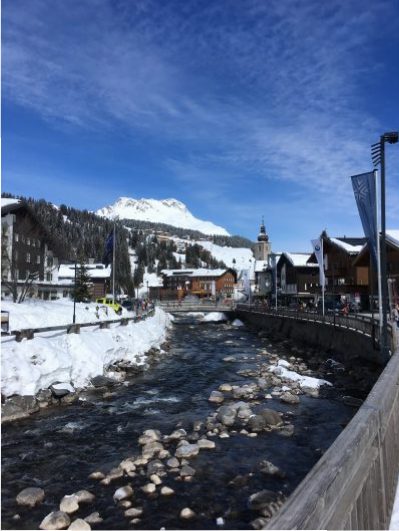 However, few resorts have a more exclusive image than Lech. Princess Diana was its most distinguished patron and other past visitors include the Jordanian royal family, the Dutch royal family and Monaco’s Princess Caroline. Oops, better mention too it’s the home of a number of World and Olympic ski champions!

Lech, Zürs and Warth-Schröcken’s combined ski area runs to 180 km of pistes and there’s plenty of entertainment for every standard – although the slopes are best suited to intermediates. Lech is the middle village, with Zürs to the south and Warth, which connects to Schröcken to the north. Their combined ski area divides naturally into three distinct sectors which also include Stuben, St. Christoph and St Anton; collectively making it the biggest ski resort in Austria and the 5th biggest in the world with a massive 305 kms of ski runs. 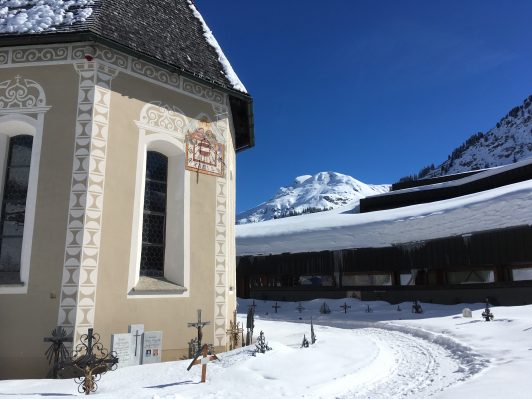 Despite its international reputation, Lech remains true to its farming village origins, but the original cluster of inns around the church and the river  has expanded over the years to meet consumer demands. But, perhaps not the ones pictured here, their time was up a while ago … 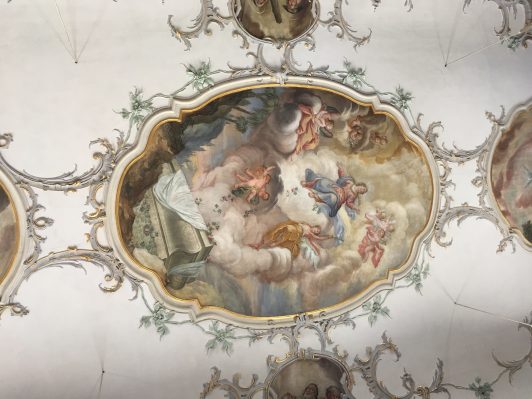 The church of St Nicholas, which is thought to have been built around 1390 is within the centre of the township and definitely worthy of a visit, even to just to marvel at its  interior’s magnificent ceiling and architecture. 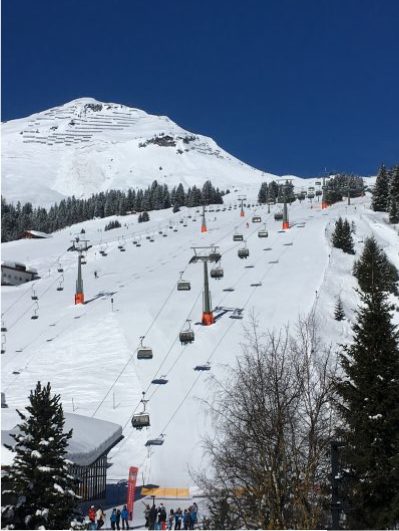 Whether you’re a beginner, intermediate or an adept skier in need of a family-friendly ski holiday, Lech offers fantastic value for money. World-famous Austrian (along with international ski instructors), work in with the ski resorts on a seasonal basis, with many visitors taking advantage of the expertise being offered here.

In Austria, children attend ski schools at an early age making them some of the best around as they become more experienced and confident with their training. 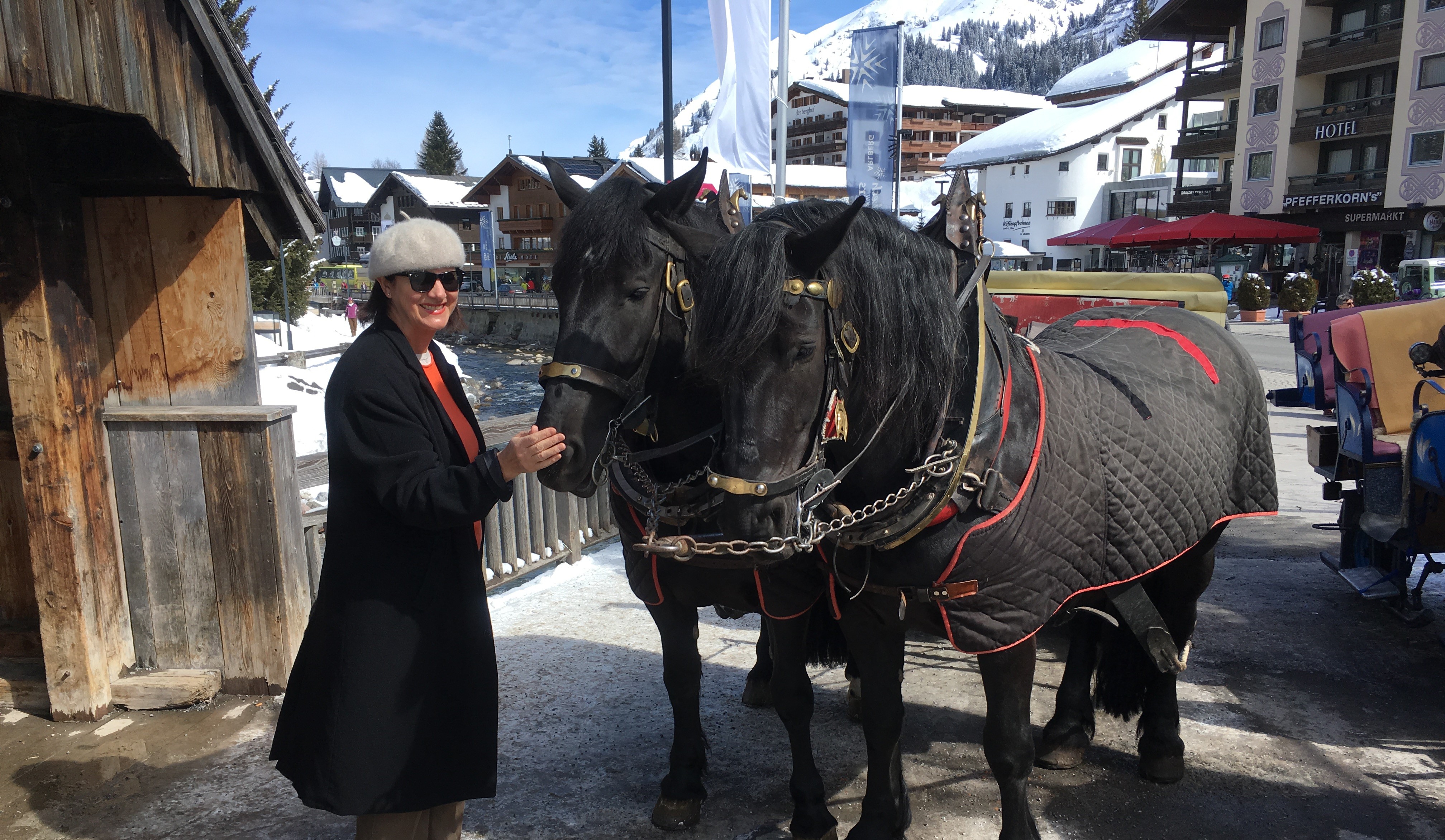 As much as I’d love to take a horse-drawn cart for a lovely trot along the snow-covered trails for the day, I’m going to hike over to nearby Zug.

Three and a half kilometres of walking to help all that wonderful Austrian cuisine dissipate off the waistline has become a high priority on my to-do list for the day. 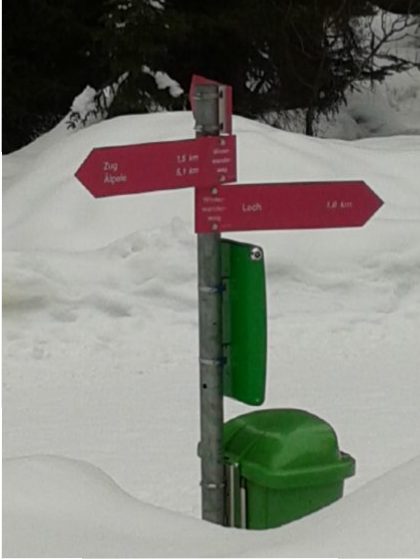 Well posted signage to point you in the right direction to Zug. No need to worry as there are quite a number of walkers going both ways if you feel you could have  potentially strayed a little. From Zug to Lech and return there is a free shuttle bus which operates daily and approximately every 20 minutes during the day. 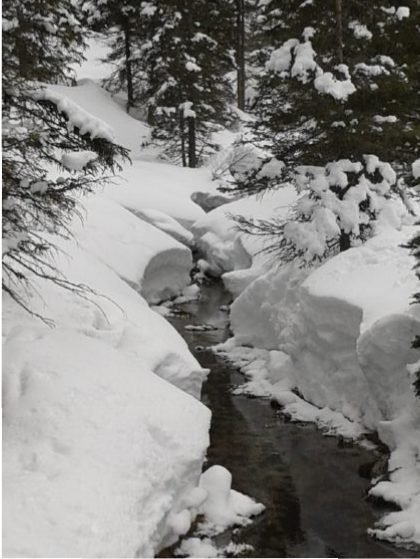 Lots of streams and waterways awakening after a long winter. Nice and fresh with the air so clean while meandering along towards Zug, it feels aesthetic and a big reward after a hectic long flight from Australia where it was heatwave conditions when I departed. 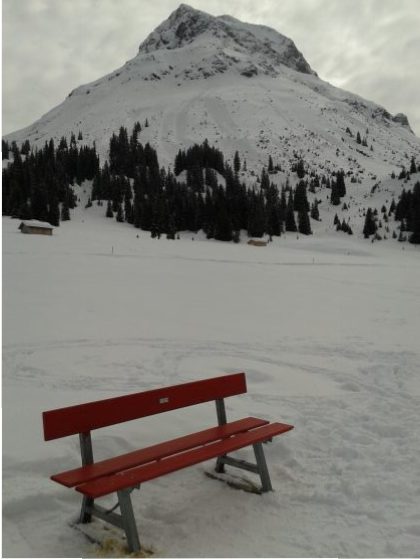 Have a seat? Don’t mind if I do thanks, even if only to simply admire the view for a while. 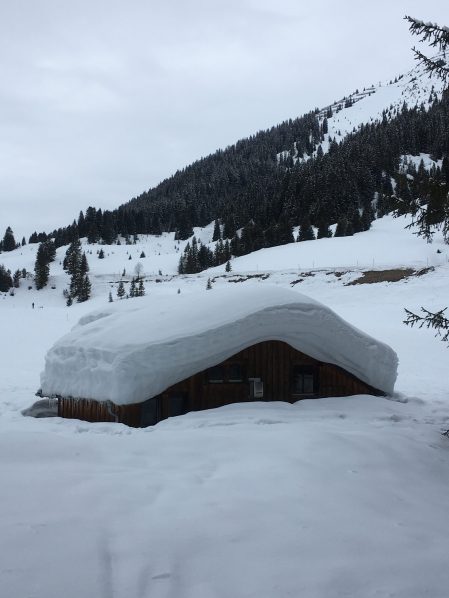 Undoubtedly, the snow has been falling here well and truly during the winter months. Sandwiched in like icing on a cake, it’s packed down tightly in layers and shows Lech is determined to deliver the goods in its peak and subsequent shoulder seasons. No one’s complaining that’s for sure. 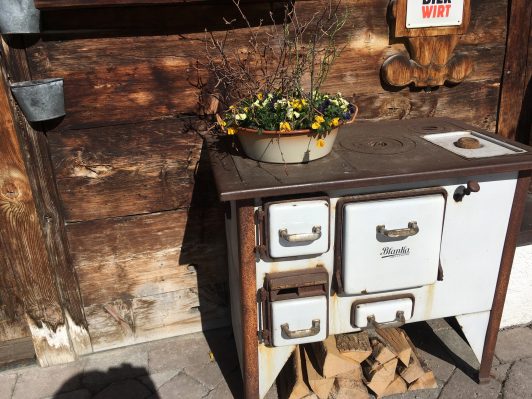 At the end of the day, Lech’s atmospheric conditions? Warm, inviting and cosy – regardless of the chill in the air. I found people had travelled from afar and were destined to have a memorable time at Lech. Why? Because many had done it all before …