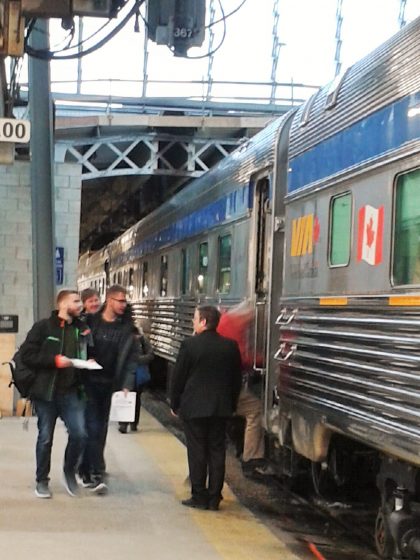 All aboard! Two very happy young blokes from Switzerland embarking early and looking excited as we’re all about to board for a memorable rail journey.

Staff checking passes for the correct carriage and our imminent departure of four nights and three days had been bookmarked for months in advance, and now it’s a reality. Doesn’t matter where you’ve travelled from in the world this is a train trip, which for me, is a case of serendipity. A photographer’s dream – traversing Canada travelling east from Toronto to Vancouver this time around in mid November. 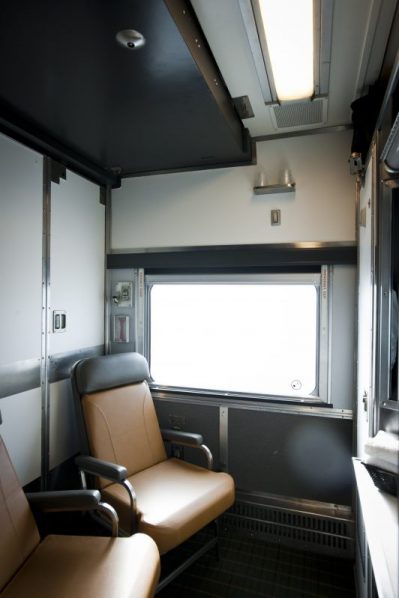 Cabin for two set up for the daytime. It’s comfortable and private with armchairs plus a large window for maximum views of the upcoming stunning scenery. 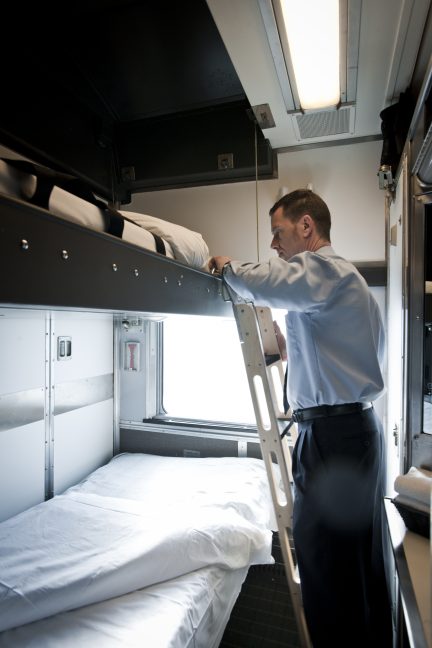 Cabin for two night time; retractable stacked upper and lower single beds with a vanity and an ensuite toilet. The old adage of ‘unpack once’ rings true here on the train as well. 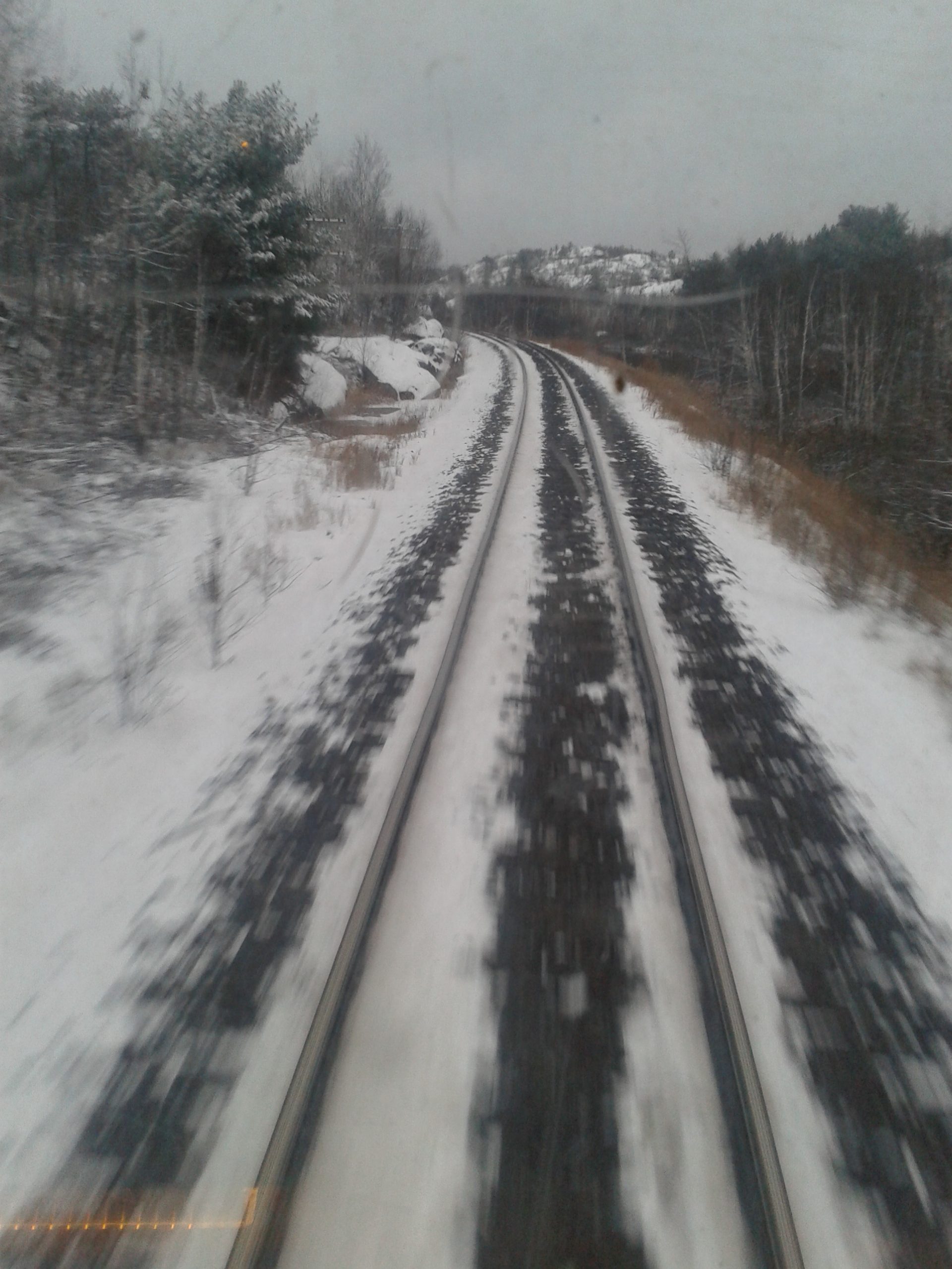 On our way trundling off with snow covered tracks – it’s a sign of what’s ahead. More snow. And if like me, you’re from a country such as Australia (which is mostly desert), you’ll love this aspect as it’s not often I experience a blanket of pure white snowflakes sprinkled and sifted over this picturesque terrain. 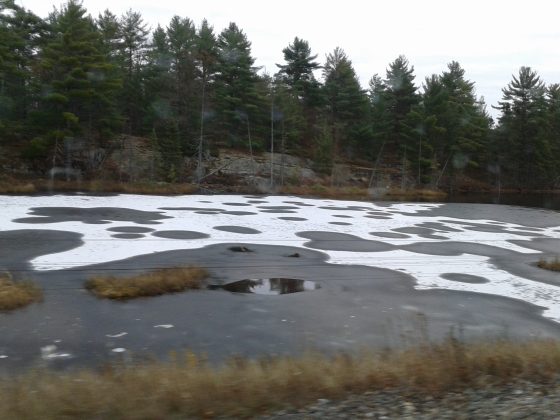 Lakes and ponds are just starting to ice over. With the ever-changing moving postcards flashing before your eyes (not unlike this photo), you won’t want to take your eyes from the window. 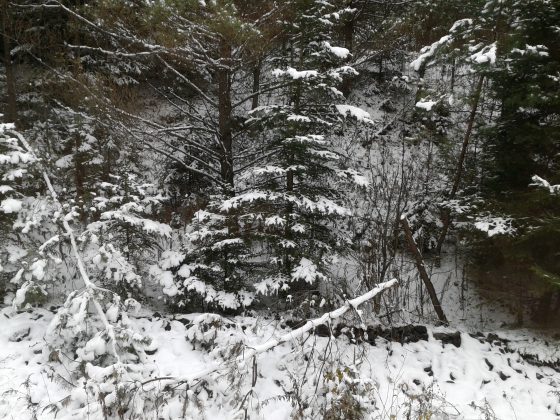 Canada’s winter wonderland is in the making undoubtedly as the carriages rock and roll along to the beat of a train on a mission. 2017 marks a significant moment in the History of Canada as 150 years ago, Quebec, Ontario, New Brunswick and Nova Scotia – united to create the Canadian Confederation. 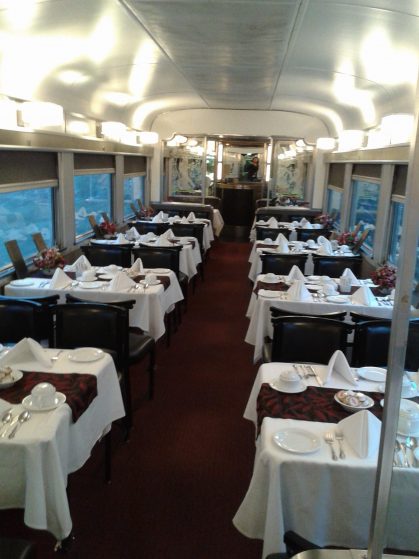 The Dining car is very much the centre piece for qualifying guests to mingle and make new friends and acquaintances over a three-course luncheon and dinner settings.

Breakfast is served early with two settings on this occasion and for late risers it’s a treat not to have to rush. 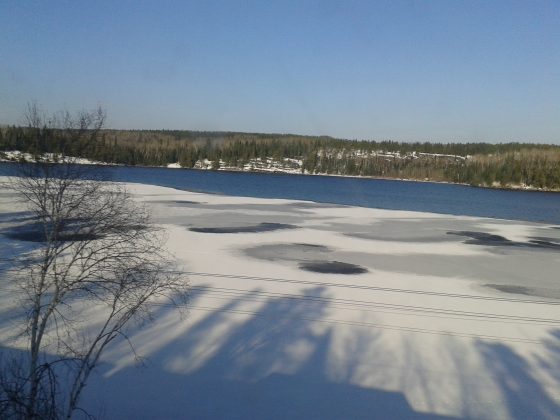 Spectacular views all along the way. Take off those blinkers in the morning and check the outlook for the day? Yep more snow … 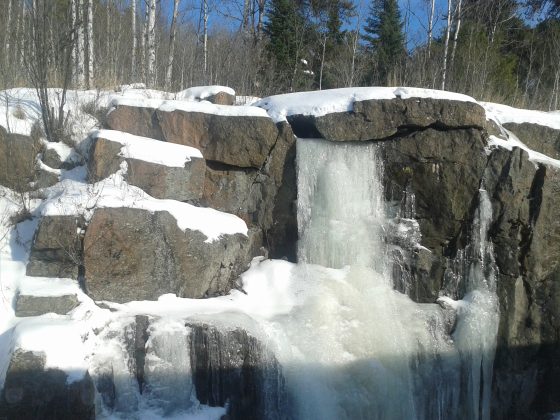 A frozen waterfall of ice. Brrr glad I’m in bed looking at this.

Homes along the way look cosy enough, but not sure about clearing off icy cars to head off to work for the day … However, that’s the day-to-day life of a Canadian during winter. 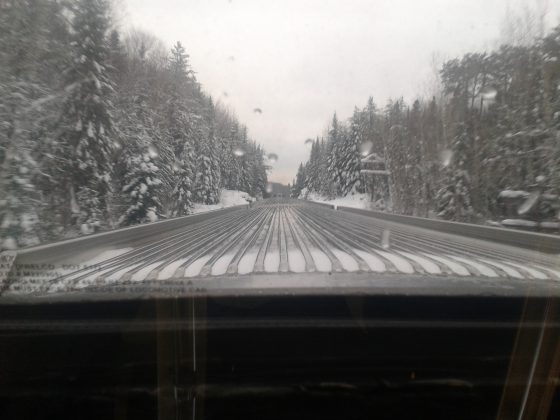 View from one of the dome cars on The Canadian. Seating here is on a first-come basis and my advice is go early as it’s one of the most sought after areas on the train. 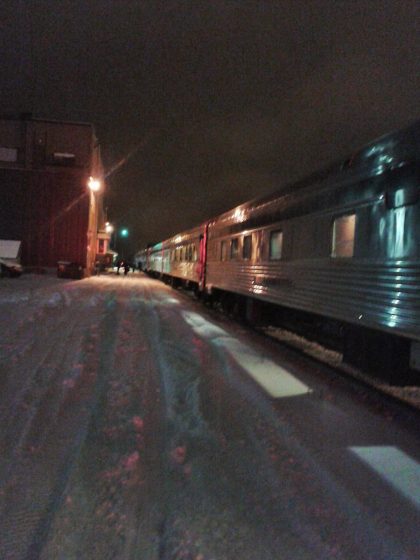 A stop allows passengers to hop off and stretch their legs. Although at night, it’s still a way of admiring our train taking a breather and readying itself for the half-way point of Winnipeg which is not too far away now. 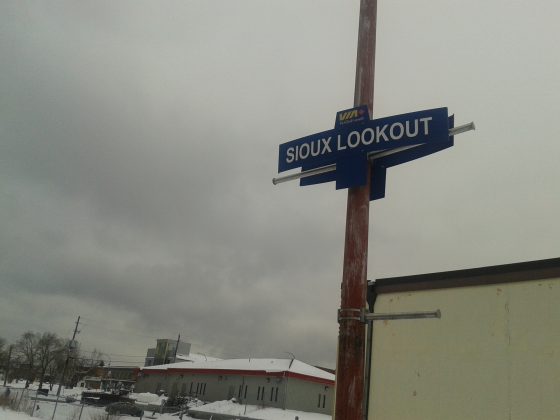 Sioux Lookout is our stop before reaching Winnipeg whereby, there’s a number of fishing camps in the area that allow access to an extensive lake system fed by the English River. 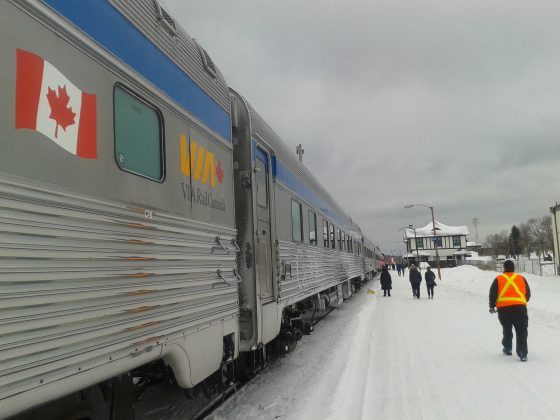 Here at Sioux Lookout, we’re able to walk around and a heavily laden snowy landscape is revealed. Crunching below your feet you can feel the depth of the fall from the overnight trip and very happy to say my cabin was nice and snug by comparison! 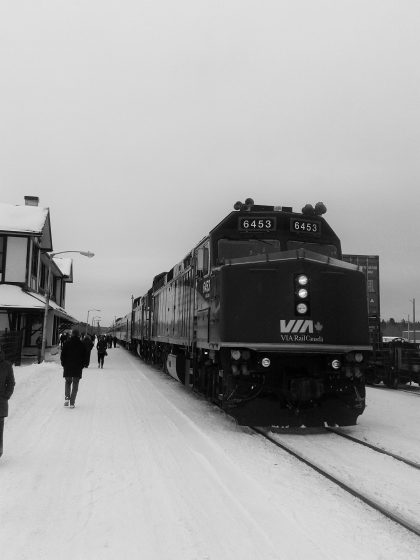 Upon closer inspection of Via Rail’s The Canadian, it shows a mighty and powerful work horse blowing off some steam before taking us to our next stop along this magnificent rail journey of 4,466 kilometres (in total). 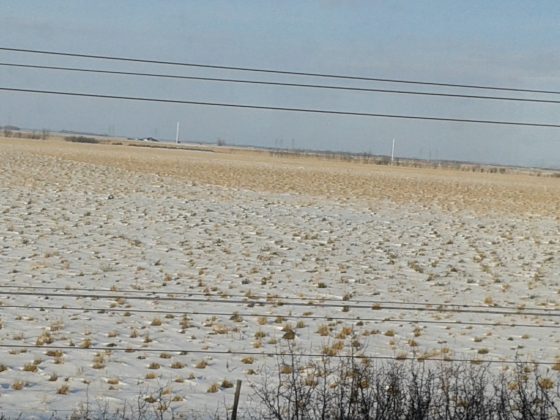 Icy fields show off Manitoba which is bordered by the provinces of Ontario to the east and Saskatchewan to the west. Its landscape of lakes and rivers, mountains, forests and prairies stretches from northern Arctic tundra to the Hudson Bay. We’re crossing through the southern farmlands now on our approach to the capital city of Winnipeg. 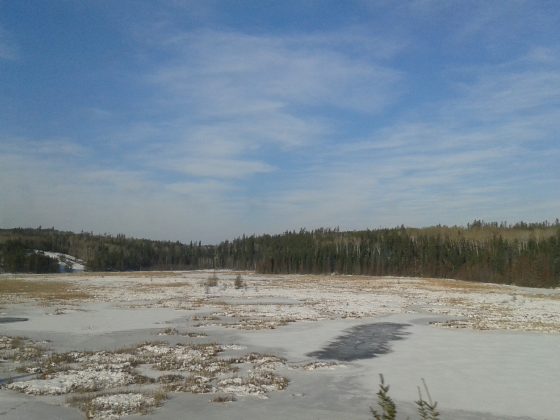 The lakes and waterways are now freezing over and temperatures will continue to drop as winter truly sets in before the month of December. As opposed to some coastal areas, it’s much colder here inland with farm animals being housed and fed, while the wildlife is retreating for hibernation. 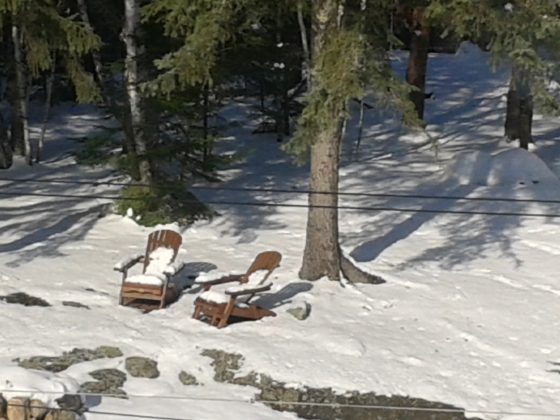 Would love to drop by, but maybe some other time for a cuppa! Just a little busy being cosy and warm on board with a coffee and cake thanks. 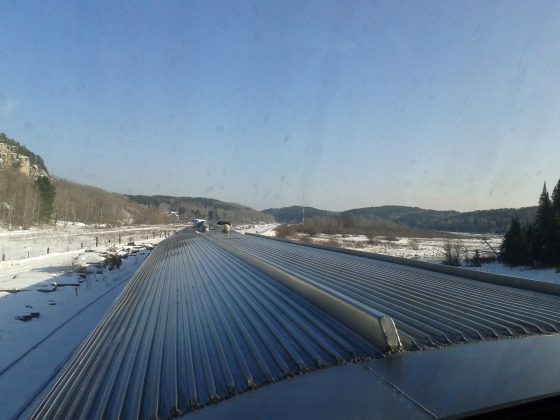 VIA operates intercity, regional and transcontinental trains linking 450 communities across its 12,500-kilometre network. Their mandate is to provide safe, efficient and reliable passenger transportation, with service in the country’s two official languages.

For further booking and information check the website http://www.viarail.ca

Next blog post we continue onto Vancouver from Winnipeg as Part Two.